The activist employee hasn’t gone away 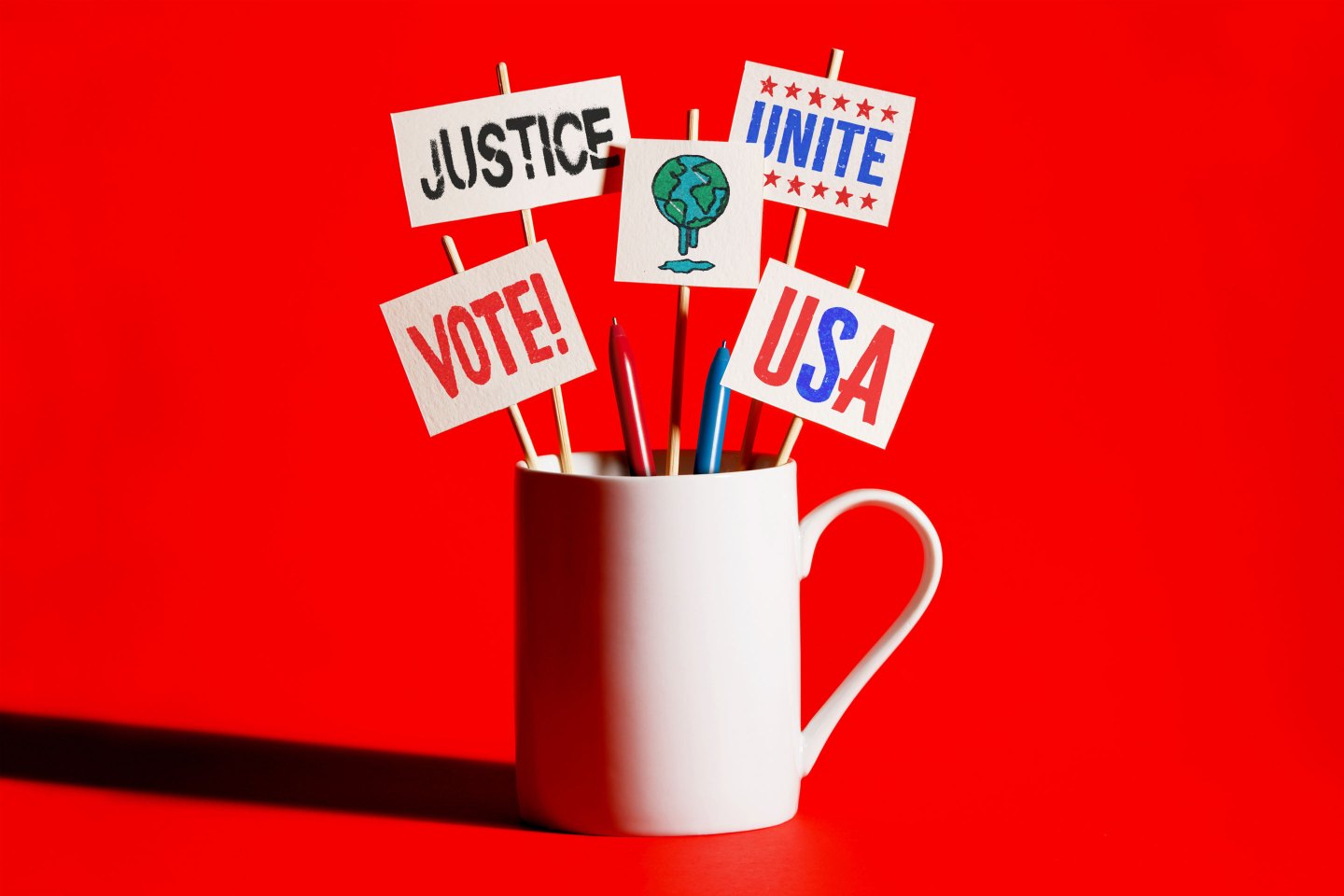 As the election approaches, the building trend of employee activism against employers seems to be taking a benign turn—but don’t imagine that America’s employers and workers are now united in peace and love. While high-profile employee walkouts and protests have faded in the pandemic era, a new kind of friction, with higher stakes, is on the way. The election’s outcome will strongly influence how it plays out.

The largest employee protests have shocked many. Last year some 3,000 Amazon employees walked out in opposition to the company’s climate policy, and hundreds of Wayfair workers walked out to protest the company’s sale of furniture to U.S. immigrant detention centers. In 2018 an estimated 20,000 Google employees marched to protest the company’s generous severance payment to an executive accused of sexual misconduct. Such large-scale employee revolts over issues unrelated to pay, benefits, or working conditions were unprecedented. Something truly new was happening in the workplace.

Temporary factors have tamped down the activism so far this year. It’s hard to organize attention-grabbing walkouts when everyone is working from home. In addition, intense social activism in the form of massive nationwide protests over racial inequities and police behavior have largely outweighed complaints against individual companies.

At least for the moment, hundreds of companies have also found a welcome way to unite employee activism with corporate purpose. They’re offering incentives for employees to vote and facilitate voting (see sidebar). Workers and employers are likely relieved to be collaborating on what they agree is good for the country.

Such amity is only a lull, however, as these two groups work out the terms of a new relationship. “Employee activism has become normalized,” says Leslie Gaines-Ross, who recently left the Weber Shandwick communications firm after 14 years there researching corporate reputation and, more recently, employee activism. “It’s now permissible to take sides on social and political issues. Everyone is taking sides—CEOs, coaches, Nobel Prize winners. It’s normal today.”

Still, it’s one thing to take sides, another to carry placards down the street denouncing your employer for behavior that doesn’t affect your paycheck or safety. Recent research from the University of Southern California finds that most companies aren’t prepared for such baffling behavior. In a survey of public relations executives, most said their companies have no policies on employee activism, and most don’t even know whether their companies support employee involvement in activist activities.

Today’s employee activism is explained in part by the psyche of millennials, for whom such seemingly bizarre behavior doesn’t seem bizarre at all. They’re just as aware as their elders that it risks getting them fired, says 2019 research from Weber Shandwick. They just don’t care as much.

The reason is that, on average, millennials much more than previous generations value working for a company with a noble mission, recognized for making a positive impact on society. Research from Deloitte finds that 80% of them say they’d be more motivated working for such a company. Because so many of them feel that way, working for one of those companies gives them prestige among their peers.

Result: For millennials especially—and increasingly for workers of all ages—an employer’s behavior in the larger world is part of the employee’s working conditions. It isn’t irrelevant. It’s the kind of thing for which workers go on strike.

That fact has been noticed by organizations that help workers go on strike, labor unions. Employee activists “see the value of collective action. It makes their voices more powerful,” says Elizabeth Shuler, secretary-treasurer of the AFL-CIO. When an Amazon activist group, Amazon Employees for Climate Justice, held an online conference in April, a key speaker was AFL-CIO president Richard Trumka, the most powerful person in U.S. labor.

Organizers of the walkouts at Amazon and Google have conferred with officials of various unions—which group initially approached the other is not clear—and have met with other employees about potentially unionizing. Google executives have met with IRI Consultants, one of the many firms that advise companies on how to prevent unionization, and the company fired some of the activists for violating corporate policies. (Firing someone for advocating unionization is illegal.)

Amazon has also fired employee activists, a move that CEO Jeff Bezos defended at the company’s annual meeting in May. “We support every employee’s right to criticize their employer’s working conditions,” he said, “but that also doesn’t mean that they’re allowed to not follow internal policies.”

The almost entirely nonunionized big tech firms are far from the only ones with activist employees, but they are the most prominent. For them especially, employee activism could evolve into a fight over unionization. “The tech industry is the next frontier for the labor movement,” says the AFL-CIO’s Shuler. In January the Communications Workers of America launched the Campaign to Organize Digital Employees (CODE). Its initial targets are the video game makers.

Success for the established unions is not assured. While a Biden victory in November would strengthen their position enormously, many tech workers and millennials are leery of unions as relics of a bygone age. And some successful companies—think of Nike and Patagonia—have embraced employee activism and even led it, to their benefit. What seems certain is that such activism will continue to grow, bumping up uncomfortably against the hard realities of running a business.

Time to Vote wants employers to pay its workers for time they spend voting and volunteering on Election Day. It’s had an astonishing effect on poll worker recruitment.
COURTESY LEVI STRAUSS & CO

Big business for the civic good

Time to Vote wants employers to pay their workers for time they spend voting and volunteering on Election Day. It’s had an astonishing effect on poll worker recruitment.

It’s a striking new phenomenon in this election year: More than 900 companies are offering to pay employees for the time they spend voting in November, and in many cases for staffing polling places. The catalyst is Time to Vote, a nonpartisan, business-backed nonprofit formed in 2018 by Levi Strauss, Patagonia, PayPal, and other major corporations. In this year’s combustible political atmosphere, its uncontroversial purpose has struck a chord. It also alleviates a COVID-19 problem: Many poll workers are elderly and shouldn’t spend a long day interacting with thousands of strangers. Time to Vote set a goal of recruiting 250,000 poll workers this year. By early September it had recruited 350,000.

A version of this article appears in the October 2020 issue of Fortune.