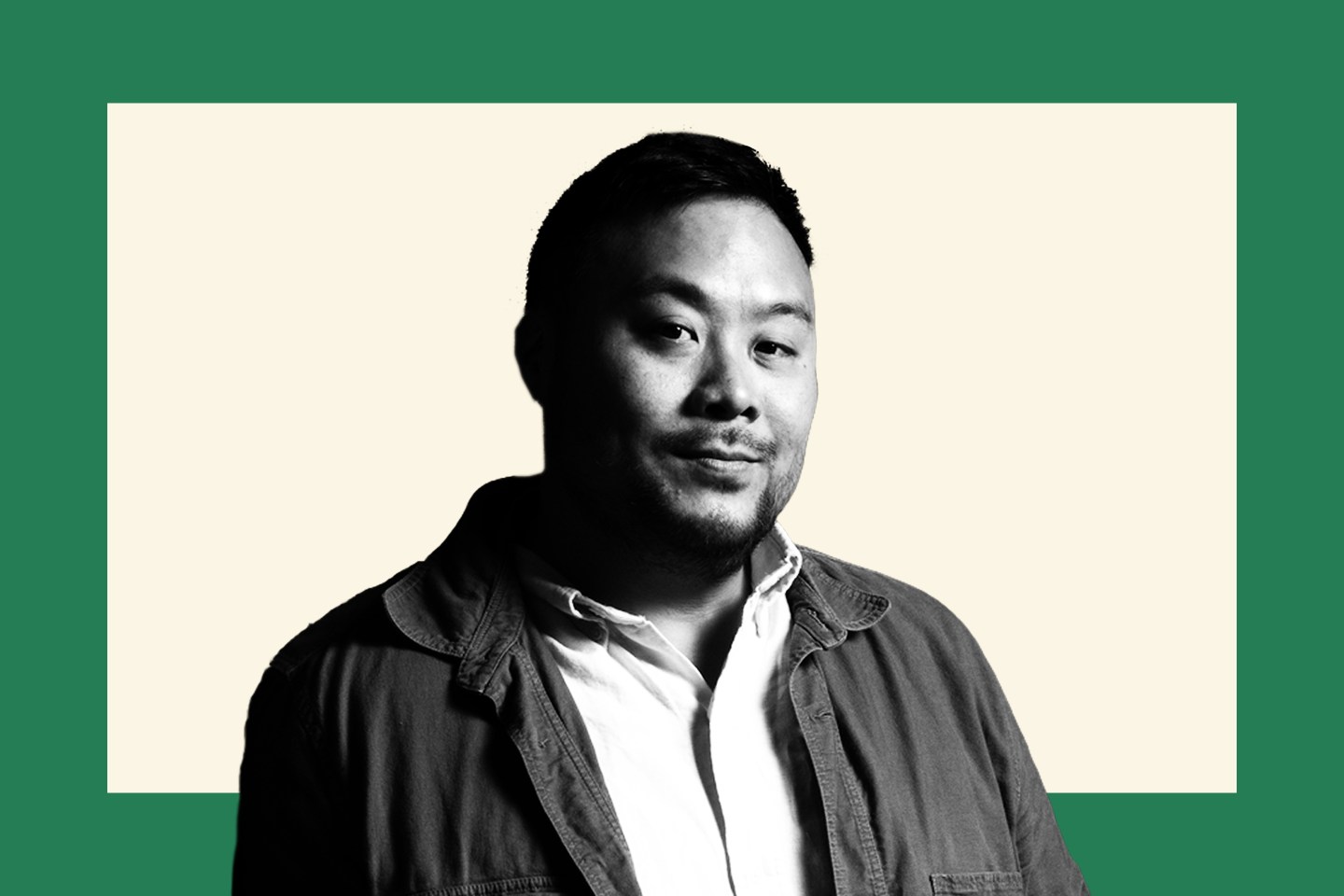 David Chang is focused on advocating for the restaurant industry amid the pandemic.
Marvin Joseph—The Washington Post/Getty Images

Since opening up his revolutionary Momofuku Noodle Bar in New York City 2004, Chang has not only built a restaurant empire but also become a spokesperson for the industry as a whole with Netflix show Ugly Delicious, a podcast, and now his just-released memoir, Eat a Peach. In his new book, written with Gabe Ulla, Chang scrutinizes his own success, bipolar disorder, and depression with the same honesty and bluntness that has made him such a critical figure in food culture.

These days, his message is a dire one: Restaurants are an essential part of the “oil” that keeps society and the economy running smoothly—and they are struggling to survive amid the COVID-19 pandemic. Even Momofuku has had to close two of its locations. The chef is focused on advocating for the industry with elected officials, pushing for government assistance, and trying to create solidarity within the sector. The big question he’s trying to answer: “How do we fix this industry so it isn’t so fragile?,” he asks. “How do we make sure we don’t repeat these mistakes?”

The following are edited excerpts of Fortune’s conversation with Chang.

Fortune: Let’s start by taking the temperature of the industry right now. In April, you said that it had been the hardest couple of weeks of your life. Have things gotten better or worse?

Chang: I don’t know if things have gotten better. We’ve just adapted to it. We understand the obstacles ahead of us a little bit better. The only thing that can really change the situation is a vaccine or some kind of effective therapeutic and proper government assistance that it seems every other English-speaking nation has been doing for their small business and restaurant industry. But our American government cannot seem to get its act together.

What’s been your strategy?

The first thing was trying to take a pragmatic approach: What is going to be most useful for us in a distressful situation and preparing for a scenario if and when we were to reopen. We spent I don’t know how many thousands of hours, our entire team, on it. You have to overhaul everything you’ve done. For the most part, we were just waiting—waiting for answers and doing what we could.

The restaurant industry has been a metaphorical car that’s always needed a new engine and shocks and breaks and a muffler. We could never fix it because it was always on the move. Now it’s stopped, and let’s take the time to do this right.

You just touched on how COVID has brought to light some of the industry’s vulnerabilities. What are they? Can they be fixed?

It’s becoming increasingly clear that I don’t think small businesses should have to pay for healthcare. That should be something that is universally provided. And it’s proved that we need some kind of universal basic income.

It was hard to make it work before the pandemic. Even if you were a proven operator, it was hard to get a loan because everyone in the financial industry knew the shaky financial ground that restaurants were built upon. It’s exposing the cost structure, and we need to evaluate how much you can charge for food. I think the real cost is probably a 30%, 40% increase across the board. I don’t know how anyone will pay for that.

The discrepancy is if you have the capital and the cash flow to have scale and you have access to public markets, you have no incentive to raise the prices. Because of that dynamic, you’re going to see just dramatic change in the industry.

This is problematic for the country at large because restaurants are like banks. We just don’t hold onto the money and collect interest. We bring it in, and we immediately send it out to a variety of things, from florists to bakers to purveyors to farmers to employees. We’re like the oil in this culture. We just constantly lubricate it by giving it away.

What does Momofuku look like as a company in 2035?

We never knew a pandemic like this was going to happen, but we always try to prepare for what might be terrible. We look at the trends, and it’s a reason we started a delivery service before it was cool. We’ve done everything knowing that we had to diversify for bad times. We started an equipment company. We were in media. We have a lab where we have focused on making mostly fermented products ranging from hot sauces to salts to soy sauce and versions of miso. We’ve dabbled in products before with Kraft Heinz and our Ssam Sauce.

Two years ago, we put out a lofty goal of changing our revenue in five years so 50% would not come from the four walls of a restaurant but from consumer product goods. With the pandemic, now we’ve tried to accelerate that into six months. We’re just shifting all of our resources to that and still trying to create a future of growth for the restaurants.

As a chef, how do you feel about being part restaurant company, part consumer packaged goods company?

I think a lot of chefs are saying, ‘Well, I didn’t sign up for this.’ I don’t have that luxury. I’ve got to do what’s best.

We took a big reorg. We’re going to try not to close any more restaurants. But the goal is maybe this is several steps backwards to shore up that foundation so we can create a better company moving forward, hire everyone back, do more things. The reality is we’ve got to do whatever we can to survive. If we don’t change, we don’t have any hope for a future.

Your book is in part dedicated to the underdogs. I’m curious what it is about the restaurant industry that attracts this type of scrappy person. Is that the mentality that you need in this moment to survive?

Now cooking is seen as cool, but not too long ago, if you told people you want to be a cook, people were like, ‘What the hell are you doing?’ When I went to cooking school, people said, ‘Congratulations, now you’re going to get asked did you get out of prison? Did you get out of the military? Or rehab?’ Now you see Ivy League kids cooking. It’s just the craziest thing.

The mindset with at least the older guard—and I’m in the middle at the age of 43—was that you were in this profession because you couldn’t do anything else. Many of the people that seemed to have been drawn to it, at least in my world, for whatever reason couldn’t fit into the status quo. I tend to think that scrappiness comes from never fitting in.

Restaurants provide this weird structure that I needed. I have been yelled at basically my entire life, from my father, my family, to high school. And then obviously in kitchens. I just couldn’t fit in anywhere else. And I get to kitchens and wow, I’m like, there’s something familiar about this environment. At least for me, what I loved about cooking was that it’s an addiction. I’m an addict to that kitchen high that so many of us get.

In your book you write about your evolution as a leader. You’ve been told in a board meeting that you are the worst businessperson they’ve ever met, and your executive coach said that it was incredible so many people have stayed by your side for so long when they can’t stand you.

The worst thing a chef can be told by a businessperson or investor is that you’re an artist. Part of that is true. We are. But part of that is also this weird bias that if you are a chef, you don’t know how to do anything else. I think it’s a self-perpetuating thing.

I’ve made a lot of mistakes both on making business decisions and being a business leader. And that’s hard. I’ve been working on a lot of my own issues. I can’t rationalize as much as I want to why I was a yeller or continue to have a bad temper.

It’s one of the reasons why I’ve given up a lot of control at Momofuku. I don’t make decisions. A lot of that is understanding what triggers me. If you have an addiction problem, you shouldn’t put someone in a situation where they might be tempted. I’m working on it, and it’s not been easy.

You write very openly about your depression and your anger, and how they’re tied in some ways to your success. How do you think about your creativity when it’s these issues that fueled your career? What fuels the next chapter?

Well, whatever was working for me before, I can now look and ask, did it even work? Was I open to new things? Did any of that ultimately lead to more happiness, to a net positive for myself and the people around me in the world at large?

Maybe getting to the top of the mountain isn’t the goal. Maybe it’s going halfway and come back down. This whole idea of success for me is something that is constantly shifting and changing, and I think about what that means for me going forward. This is the truth, I really don’t know.