Admit it: You miss being stuck in traffic 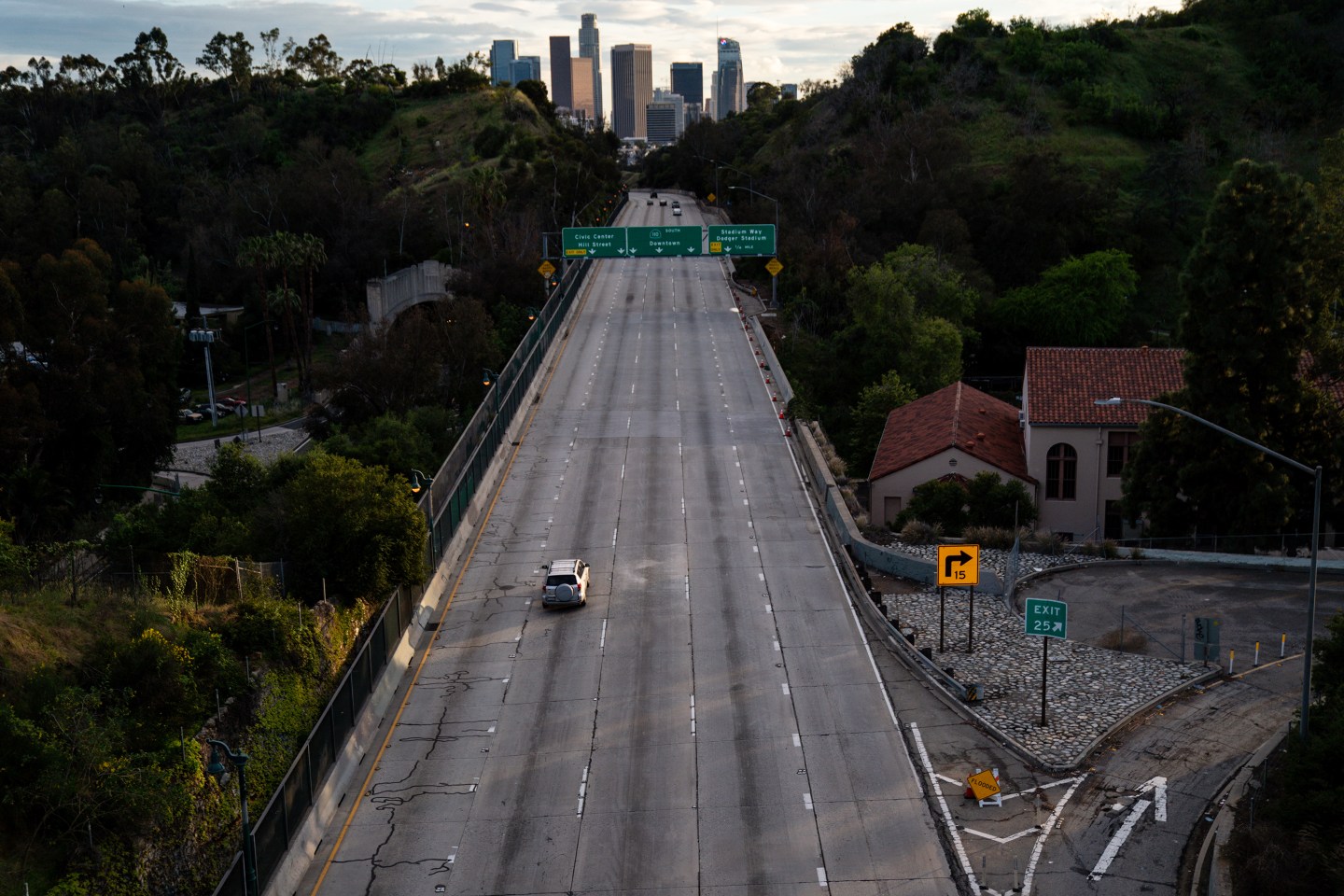 LOS ANGELES, CA - APRIL 10: Rush hour on the Interstate 110 doesnt look like it normally does, viewed from a bridge in Elysian Park on Friday, April 10, 2020 in Los Angeles, CA. As the southland enters the Easter holiday weekend, Los Angeles County health officials warned Friday that the region needs to significantly increase social distancing to slow the spread of the novel coronavirus and that stay-at-home restrictions could remain well into the summer months. (Kent Nishimura / Los Angeles Times via Getty Images)
Kent Nishimur—Los Angeles Times/Getty Images

By CALIFORNIA TRAFFIC, as told to JOE MATHEWS

I know you’ve never liked me, and for that I’ve never blamed you. You Californians like to live your lives fast, and I’m all about slowing you down. So I try not to take it personally that you complain about me more than drought or Donald Trump.

Yes, I make you late to school and to work. I lengthen your brutal commutes. And I contribute to pollution that causes everything from asthma to climate change.

But give me this much: When COVID-19 came, and I took a vacation, California suddenly didn’t feel like California anymore.

Truth be told, under normal circumstances, California isn’t the most congested place in the U.S. Much of our giant state is empty, while Hawaii’s small island roads are packed. My fearsome reputation is really based on awful traffic in California’s giant urban regions.

At first, you celebrated my disappearance. The highways were wide open. The Bay Bridges weren’t jammed, and you could actually get from downtown San Diego to North County. Even when businesses reopened, traffic was less than 80% of normal statewide.

You were happy because you dwell on my costs—in gas, vehicle maintenance, air quality, and lives—without appreciating the benefits I provide. Now that those benefits have vanished, I wonder if you might give me more respect.

For starters, I’m the best excuse you have for your flakiness and irresponsibility. When you’re ludicrously late to school or work, or when you miss your brother’s wedding, all you need is to invoke me, traffic, and your fellow Californians will absolve you of your tardiness. Now in the pandemic, you probably don’t have to be anywhere, but if you do, and you’re late, you’ve got no excuse!

I also hope COVID has given you a more forgiving perspective on time. Transportation agencies like to issue studies that accuse me, traffic, of being a thief, by stealing 60-plus hours annually that you could spend with your families. But now that so many of you are stuck with your families all the time, I detect a new appreciation for all the quality time you used to spend stuck with me. I let you listen to whatever music you like, without ever complaining. Can your kids say the same?

That may seem trivial, but the carnage on our roads—more than 3,500 traffic deaths annually—is serious. And the pandemic suggests that my talent for congestion actually keeps you safer. In the early weeks of the lockdown, traffic accidents, injuries and deaths dropped. But since then, without me slowing people down, speeding drivers have made the roads much deadlier. Even with much less traffic, we’re on track to have just as many deaths on the roads as in 2019.

Controlling speeding is just one of the many social goods for which I, traffic, deserve more credit. Research shows that, despite conventional wisdom that traffic slows commerce, congestion is good for the economy and jobs. So you won’t escape economic depression without me.

I support millions of jobs directly, from car dealerships to car repair shops and car washes (I’m very proud of the fact that California leads the nation in per-capita car washes). But I also create positive economic incentives. I’m a force for innovation, encouraging the concentration of high-tech and other industries. And the gas taxes that drivers pay are how our society funds much of its transportation infrastructure, and the construction jobs that come with it.

And, contrary to popular belief, I’m also a huge proponent of public transportation. People get on trains and buses to avoid all the hassles and time loss of struggling through me. Transit ridership has completely collapsed, and that’s not all because of disease fears. I’m no longer there to scare drivers. My buddies L.A. Metro and BART have lost most of their ridership, and Caltrain, which connects San Francisco and San Jose by rail, may go under. Local and state governments will have to bail out transit systems until I can return to do my essential artery-clogging work.

I don’t limit my environmental work to supporting transit. Fear of my congestion also creates incentives for infill development in dense urban areas, and for people to live closer to work, to walk and bike more, and to use ridesharing rather than owning cars. Best of all, congestion, forces people to congregate in places where they can talk, plan a rally, or meet a significant other.

You may still hate me, but I create opportunities for you to fall in love!

That’s why I’m asking you to wear those masks and maintain social distance. The sooner California can beat back the pandemic, the sooner you and I can be together again.