Nissan takes on Tesla with the launch of Ariya, an all-electric SUV 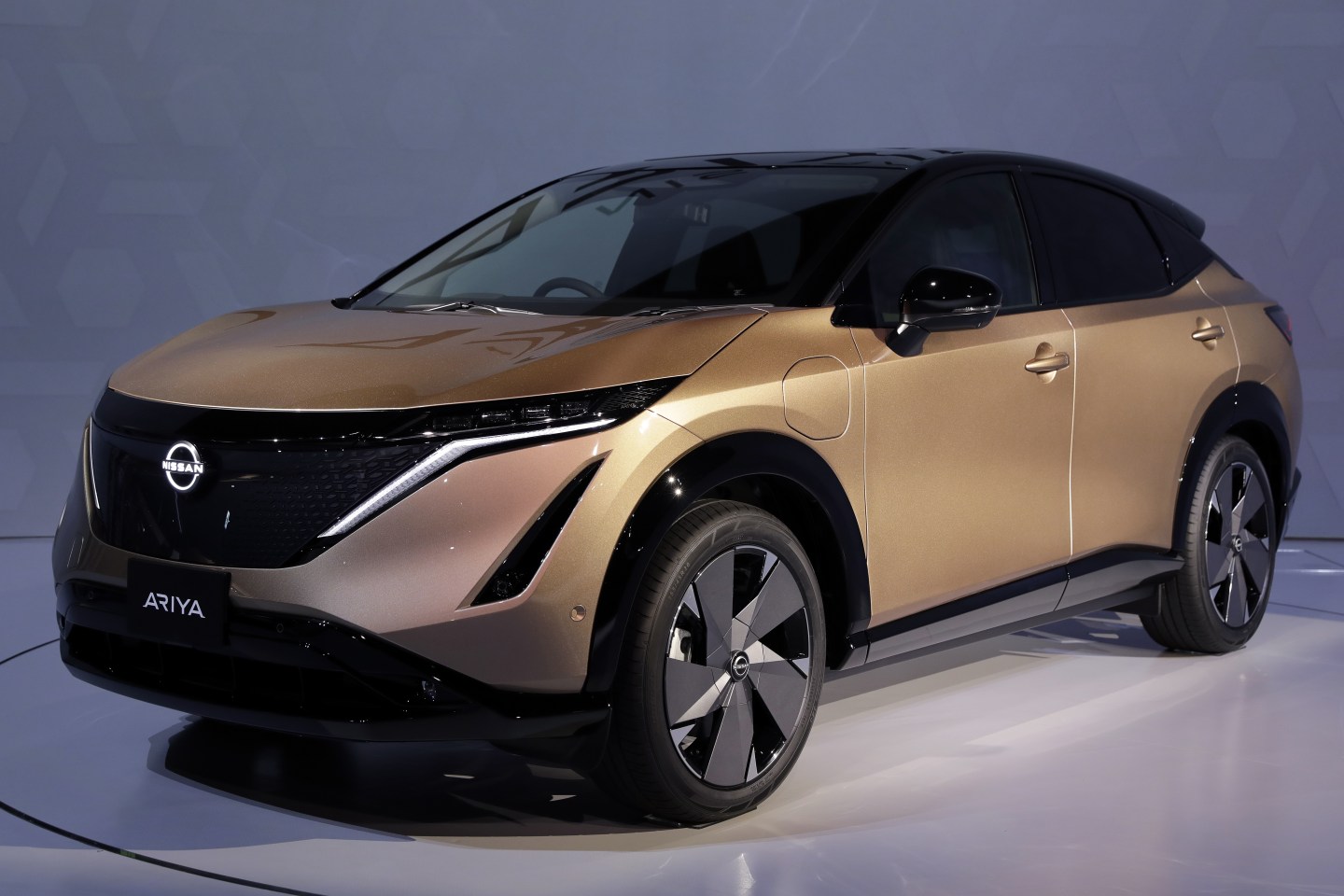 Nissan Motor Co. unveiled a new electric vehicle and redesign of its “hamburger” corporate logo, seeking to make a fresh start after months of management turmoil and declining profitability.

The Ariya, an all-electric SUV with a range of as much as 610 kilometers (379 miles), is the first entirely new product to be launched under new management that took over in December. The debut of the model, which has a starting price of about 5 million yen ($46,600), is the automaker’s latest effort to refresh an aging lineup.

Nissan could benefit from the buzz surrounding a new vehicle, even though it isn’t scheduled to go on sale until mid-2021. The Japanese automaker had its biggest loss in two decades for the year that ended in March, and the November 2018 arrest of former leader Carlos Ghosn triggered management turmoil that lingers to this day. The Ariya serves as a reminder that Nissan is still Japan’s second-biggest automaker by output, and that it has been working for years in preparation for the EV and autonomous driving era.

“Expectations are high,” said Koji Endo, an analyst at SBI Securities. “Whether this will sell is going to have a large effect on Nissan’s performance.”

Shares of Nissan advanced 7.3% in Tokyo, with analysts citing retail investor excitement about the Ariya’s debut. The stock has lost 34% this year.

A successor to the Leaf

The Ariya is a successor to the all-electric Leaf, which went on sale a decade ago in Japan and the U.S. Refreshed once in 2017, the five-door hatchback is one of the best-selling EVs in the world, with about 500,000 shipped so far. One drawback of the Leaf, however, has been its limited range of about 322 kilometers, or about 200 miles.

With a length of 4.6 meters and height of 1.6 meters, the Ariya fits squarely within the compact SUV category. The interior space, however, is comparable to that of a larger vehicle, thanks to the placement of batteries at the floor of the chassis, like in Tesla Inc.’s models.

The Ariya comes with ProPilot 2.0, the latest version of Nissan’s autonomous driving technology. The feature, which was rolled out last year for the refreshed Skyline, offers lane-changing and driver-monitoring capabilities. The Ariya also has a self-parking feature, and Amazon.com Inc.’s voice-based digital assistant Alexa.

The big question is whether consumers will be ready to buy the Ariya when it goes on sale in Japan mid-2021, and whether Nissan can get its business back on surer footing by then. For the coming fiscal year through March, analysts project, on average, a loss of 323 billion yen and a 17% decline in sales. In China, the Ariya will face tough competition from Tesla, which has a local plant churning out Model 3 electric sedans and, later on, Model Y SUVs.

“This car is extremely important for Nissan,” Senior Vice President Ivan Espinosa said in an interview. It is “the first car in a complete shift in our lineup and the way we want to address the market moving forward.”

On Wednesday, Nissan priced 70 billion yen of notes in three tranches, in its first yen debt sale since 2016. The coupons on the securities are the highest among all yen notes from Japanese firms this fiscal year, according to Bloomberg data.

Nissan is also using the Ariya’s debut to show off a new corporate brand logo, to be used on vehicles and official communication. It’s a simplified version of the prior design, with just two half-circles depicting the sun, fronted by the letters of the company’s name.

The Ariya is debuting just as the pandemic weighs on car demand and depresses economic activity across the globe. Global passenger vehicle sales are on track to slump 23% this year and EVs are set to drop 18%, the first decline in the modern era, according to BloombergNEF. The recovery will be mild in 2021, with China and Europe leading the way, according to researchers.

After going on sale next year, the Ariya will hit the markets of Europe, U.S. and China during the next fiscal year, which ends March 2022.

The Ariya will be available in four versions: a pair of two-wheel drive versions with a choice of different battery capacities, and two high-performance four-wheel drive models with different ranges. The two-wheel drive with the larger battery offers the greatest driving range.

“We now have a dedicated EV platform that will carry over into new vehicles,” Uchida said. “It’s my job, my responsibility, to bring Nissan back to the market.”