10 books on American history that actually reflect the United States 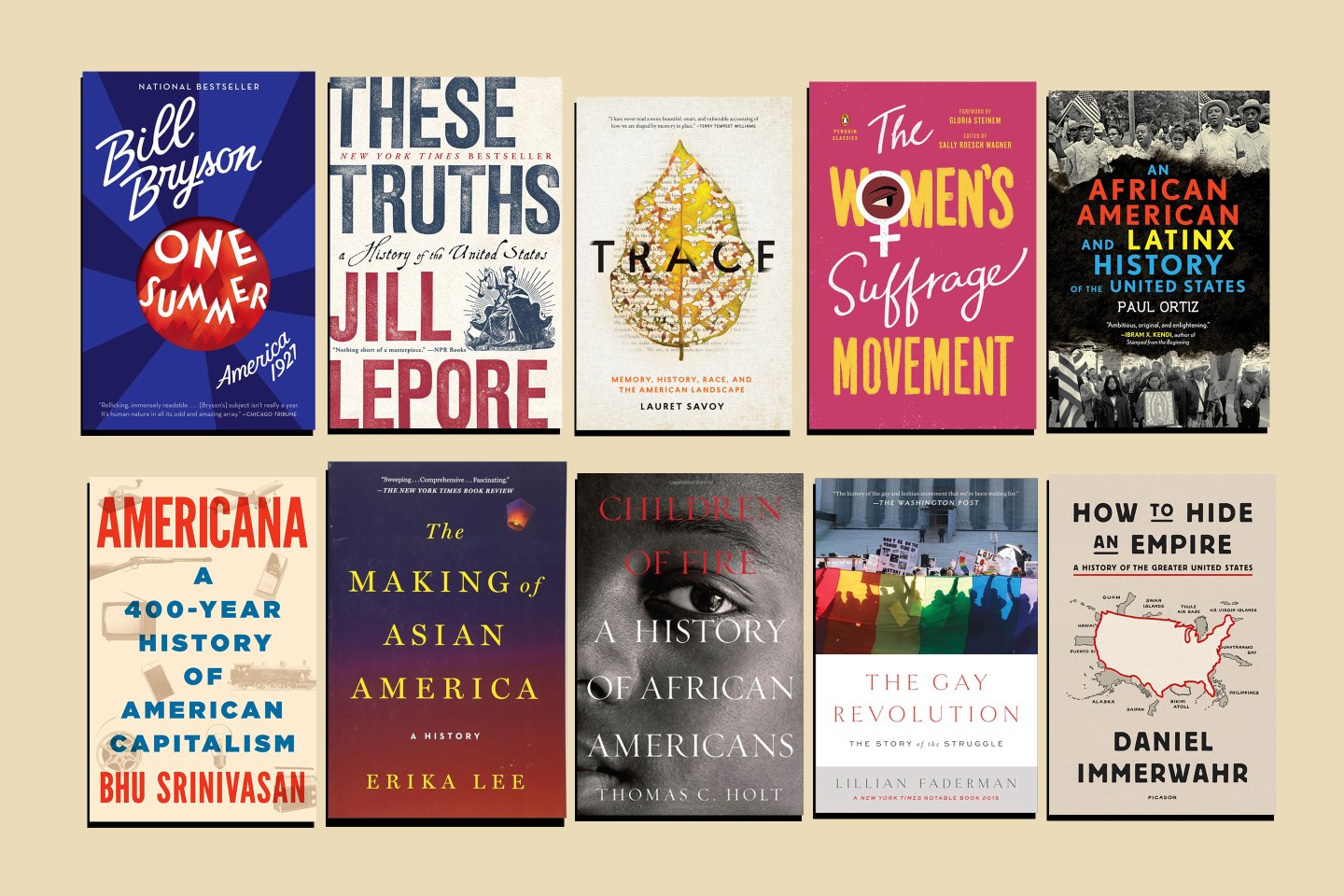 It’s often remarked that history is written by the winners. It’s also an unmistakable fact that most history lessons taught in schools are often told from white and male perspectives.

While the Fourth of July is usually a day for both celebration and relaxation for many Americans, the national mood is quite different this year. In that spirit, here is a suggested reading list of books about American history from perspectives that aren’t often included in elementary, high school, and college textbooks.

Lauret Savoy explores how the unfolding history and concept of race in the United States have marked her—as a historian and environmental studies and geology—and the land itself. From earthquake fault lines to Southern plantations, from National Parks to American Indian reservations, Savoy mediates through a series of essays rooted in her own mixed heritage (of Native American, African, and European descent) about the relationship between diverse landscapes and diverse communities, and how these environments shape the socioeconomic fabric of the country.

Children of Fire: A History of African Americans by Thomas C. Holt

University of Chicago professor Thomas C. Holt presents a sweeping history of generations of African Americans, from the arrival of the first slaves in North America in 1619 to the election of President Barack Obama in 2008. Holt treats each generation with deference and individuality but simultaneously blurs chronological lines often established by white scholars. (For example, the same people who lived through the Civil War and the end of slavery also dealt with Reconstruction and decades of Jim Crow laws to come, and yet they are often treated as two separate generations of Black Americans.)

These Truths: A History of the United States by Jill Lepore

If you’re looking for one comprehensive book—but one that doesn’t tell the same old story—Harvard professor and New Yorker contributor Jill Lepore’s one volume of history could be a good starting point. These Truths goes all the way back to 1492, but Lepore approaches the history of the United States—and by extension, North America—with an eye of skepticism, asking amid centuries of racial subjugation, whose truth are we really telling when understanding American history and politics?

The Making of Asian America: A History by Erika Lee

Professor Erika Lee, the granddaughter of Chinese immigrants who entered the United States through Angel Island in California and Ellis Island in New York, provides a comprehensive and diverse history of Asian Americans, who are often lumped together in homogenous fashion when referenced (if at all) in high school history books. Looking back to the first sailors who made the trans-Pacific crossing in the 1500s—well before the arrival of Chinese laborers working on the railroad in the 1850s—The Making of Asian America examines a variety of Asian and Pacific Islander immigrant journeys, and how their lives contrasted with their American-born descendants.

(Also worth reading: Lee’s latest book, America for Americans: A History of Xenophobia in the United States, which traces xenophobia as a political movement back to prejudiced anger over the influx of Irish Catholic immigrants in the mid-19th century, eventually paving the way to greater crimes against people of color, including the Chinese Exclusion Act of 1882, Japanese internment during World War II, and present-day mass deportations of immigrants from Latin America.)

Comprised of historical texts spanning two centuries, The Women’s Suffrage Movement is a comprehensive, intersectional anthology—one with a determined focus to shun white feminism and illuminate BIPOC voices. With a foreword by Gloria Steinem, the collection includes writings from some of the most famous suffragettes—such as Elizabeth Cady Stanton and Susan B. Anthony—but also many more women’s rights advocates long overlooked on account of race, including Ida B. Wells and the Forten sisters, a trio of abolitionists from a prominent Black family in Philadelphia.

The Gay Revolution by Lillian Faderman

Through interviews with politicians, military figures, and members of the LGBTQ community, scholar Lillian Faderman delivers a punctuated history of the last 70 years of the fight for gay and lesbian rights in the United States. Starting in the 1950s—when when gays and lesbians were treated as criminals and psychiatrists labeled them as mentally ill—Faderman’s history spans the civil rights protests of the 1960s, the counterculture of the 1970s, the AIDS epidemic of the 1980s and 1990s, all leading up to the fight for marriage equality in the 2000s and 2010s.

Courtesy of Farrar, Straus and Giroux

How to Hide an Empire: A History of the Greater United States by Daniel Immerwahr

In How to Hide an Empire, Northwestern professor Daniel Immerwahr tells a different story about the United States that is often overlooked: the one going on outside state borders. Immerwahr tracks American imperial ambitions, from Puerto Rico to the Philippines, and how the treatment and exploitation of overseas territories still influence U.S. foreign and military policy.

Covering more than two hundred years, An African American and Latinx History of the United States is an intersectional history of the shared struggle for African American and Latinx civil rights. Scholar and activist Paul Ortiz presents a more comprehensive, more proactive history of Black and Latinx communities and leaders, which stands in stark contrast to the typical reactionary narratives often depicted in mainstream history books. Ortiz links racial segregation and the struggle against Jim Crow laws to the labor organizing in the second half of the 20th century, while highlighting how Black and Spanish-language newspapers, abolitionists, and Latin American revolutionaries coalesced around movements in the U.S., Central America, and the Caribbean.

Americana: A 400-Year History of American Capitalism by Bhu Srinivasan

Well before Wall Street, capitalism has been at the core of the development of America, from the landing of the Mayflower to the birth of Silicon Valley. Media entrepreneur and author Bhu Srinivasan looks back at four centuries of American enterprise, tracing each major era through technological developments and the corporations they fueled, from the telegraph to the World Wide Web.

One Summer: America, 1927 by Bill Bryson

Bill Bryson is known for his smart, droll, but shrewd narrative style, with a slew of nonfiction books covering histories of home life and the human body to a laboring personal account of hiking the Appalachian Trail. Bryson brings it all in One Summer, a succinct title for a history book that covers one specific summer in American history—which included Charles Lindbergh crossing the Atlantic and Babe Ruth closing in on the home run record with the New York Yankees—all at the height of the Roaring Twenties and on the eve of the Great Depression. This is an unbelievably fun ride that at a few pages in, you will forget it’s a history book.