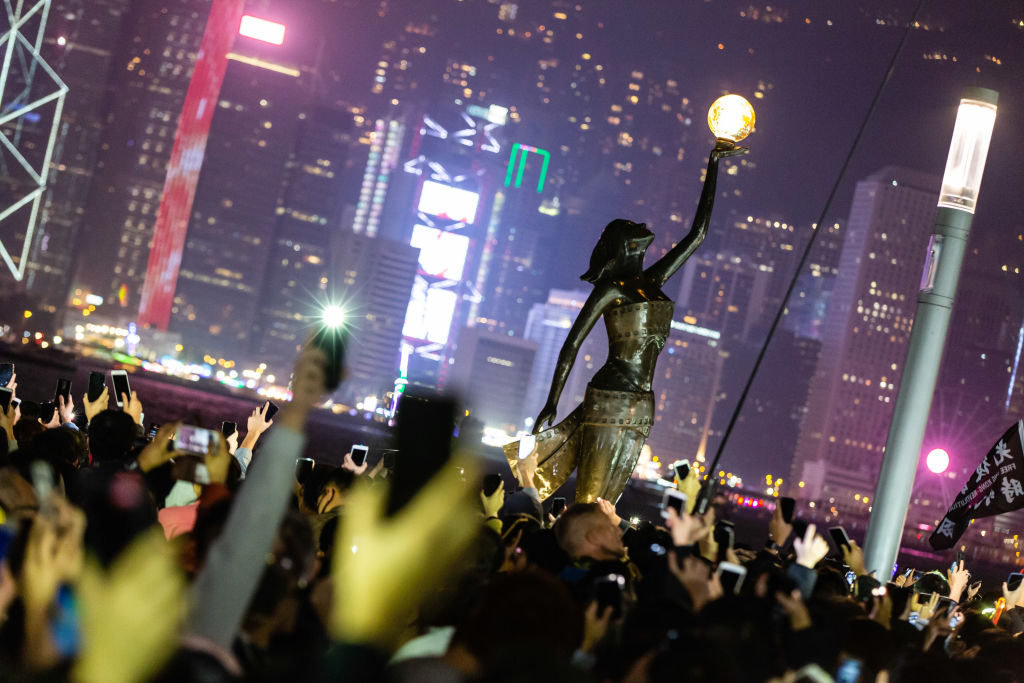 HONG KONG, CHINA - 2019/12/31: People flash phone lights at a statue during the demonstrations. Entering the 7th month of civil unrest, protesters walked inside malls and on the streets in celebration of New Year's Eve. Demonstrators chanted slogans and continued to ask for the five demands to be met. Police in riot gear appeared and arrested several masked protesters. (Photo by Willie Siau/SOPA Images/LightRocket via Getty Images)
Willie Siau—SOPA Images/LightRocket/Getty Images

Tear gas was still fresh in the air as Lee, a 33-year-old demonstrator, watched a line of protesters trade insults with riot police in downtown Hong Kong on Sunday during a lull in the city’s largest anti-government demonstration since 2019.

Dressed in all-black and wearing a surgical face mask, Lee, who shared only his surname to avoid being identified by authorities, said that he was there to oppose the new national security law that China’s government proposed for Hong Kong on Thursday. Beijing says the law is intended to prevent and punish acts in Hong Kong that threaten China’s national security. Critics believe it will be used to diminish freedoms guaranteed to Hong Kong when the U.K. handed the city over to China, such as the right to protest, a free media, and an independent judiciary system.

“I’m not afraid of China, and that’s why I came here today,” Lee said. But even as Lee felt emboldened to publicly protest Beijing’s growing influence in Hong Kong, his fears about the fallout manifested elsewhere. Hours after Beijing’s announcement, Lee downloaded a virtual private network (VPN), which conceals his Internet activity by routing his connection through servers around the world. As Beijing asserts more control over the self-governing region, Lee is increasingly worried about his digital privacy.

Shortly after Beijing announced the new law, NordVPN said inquiries for its services shot up by a factor of 120. Surfshark, another VPN service provider, said it sold a week’s worth of subscriptions in the hour following the news. Other providers like ProtonVPN and Atlas VPN have similarly reported surges in traffic and sign-ups from Hong Kong users.

The national security law does not specifically address online freedoms, and Chinese officials say the government is determined to uphold the “one country, two systems” precedent that provides Hong Kong with relative independence from Beijing. On Tuesday, Hong Kong chief executive Carrie Lam said at a press conference that people in Hong Kong have the freedom to say whatever they want “for the time being.”

Yet the concerns of protesters and other Hong Kong residents are not without merit. In mainland China, the Internet is one way Beijing restricts information and quashes dissent. Its “Great Firewall” blocks foreign websites like Facebook and the New York Times and censors domestic news and social media platforms. Foreign and domestic companies alike employ VPNs to bypass the restrictions and communicate more easily with counterparts overseas. The VPNs, however, are often slow, cumbersome, and subject to periodic clampdowns that can make business more difficult.

Hong Kong, meanwhile, still enjoys unrestricted access to the web, a trait that bolsters the city’s appeal for foreign firms and talent looking to do business in the region. But Beijing’s new national security law may open the door to Internet interference.

“Hong Kong people might need to face the reality that free speech and online speech is probably not protected as much as before,” said Jyh-An Lee, a professor focusing on Internet law at the Chinese University of Hong Kong Law School.

Lee, the protester, said he downloaded a VPN not because he thought the Chinese government would soon restrict the Internet, but rather because he’s “really afraid that the [Chinese Communist Party] will get my personal information.” Of the eight protesters Fortune spoke to on Sunday, seven had downloaded VPNs. The lone holdout said he planned to get one in the coming days.

Several of the protesters echoed Lee’s concerns that the new national security law would provide the Chinese government with legal means to make arrests over online content.

Lee, the law school professor, says that Beijing’s proposed language for the law banning seditious activities, foreign interference, and terrorist acts is indeed “deeply concerning” for the future of online speech in Hong Kong. Fang Ke Cheng, an expert in Chinese digital media and censorship at the Chinese University of Hong Kong’s School of Journalism, says Chinese authorities could use it to force Hong Kong’s Internet service providers to turn over user data. The Chinese government is unlikely to suppress Internet freedoms or online activists en masse, Fang says, but could instead target a few individuals.

A recent case involving former independent Hong Kong bookseller, Causeway Bay Books, is an example of how such government action could play out. In 2015, five employees of the store, known for selling politically sensitive titles, disappeared. The how and why of the case remain shrouded in mystery, yet many attribute the disappearances to orders from Beijing.

“There hasn’t been a widespread crackdown on bookshop owners, but that one case is enough to create an environment where everyone is afraid [for] their safety,” Fang said. Similarly, Beijing may punish a few prominent websites or Internet users to instill fear among the wider online public, Fang added.

In that sense, the law may have a “chilling effect,” discouraging online activism and prompting self-censorship, professor Lee said.

At least some protesters are keen to continue their movement online, even if adjustments must be made.

“After the security law, we will have to find new ways to go on the Internet and discuss our protest methods,” said So, a protester in his mid-twenties who wanted to keep his full name private for fear of being targeted by authorities.

Mass rallies began in Hong Kong in June 2019 in opposition to a proposed extradition bill in the city’s legislature, which opponents said would enable the Chinese government to extradite Hong Kong political prisoners and try them on the mainland. In the following months, the cause grew into an enormous anti-government protest movement with help from online platforms.

If protesters have to find alternative means to communicate online, VPNs appear to be the first step.

“The awareness of Internet security is quite high in Hong Kong,” said a 27-year-old protester and VPN user who went by the name Chan. “We are prepared for the worst.”