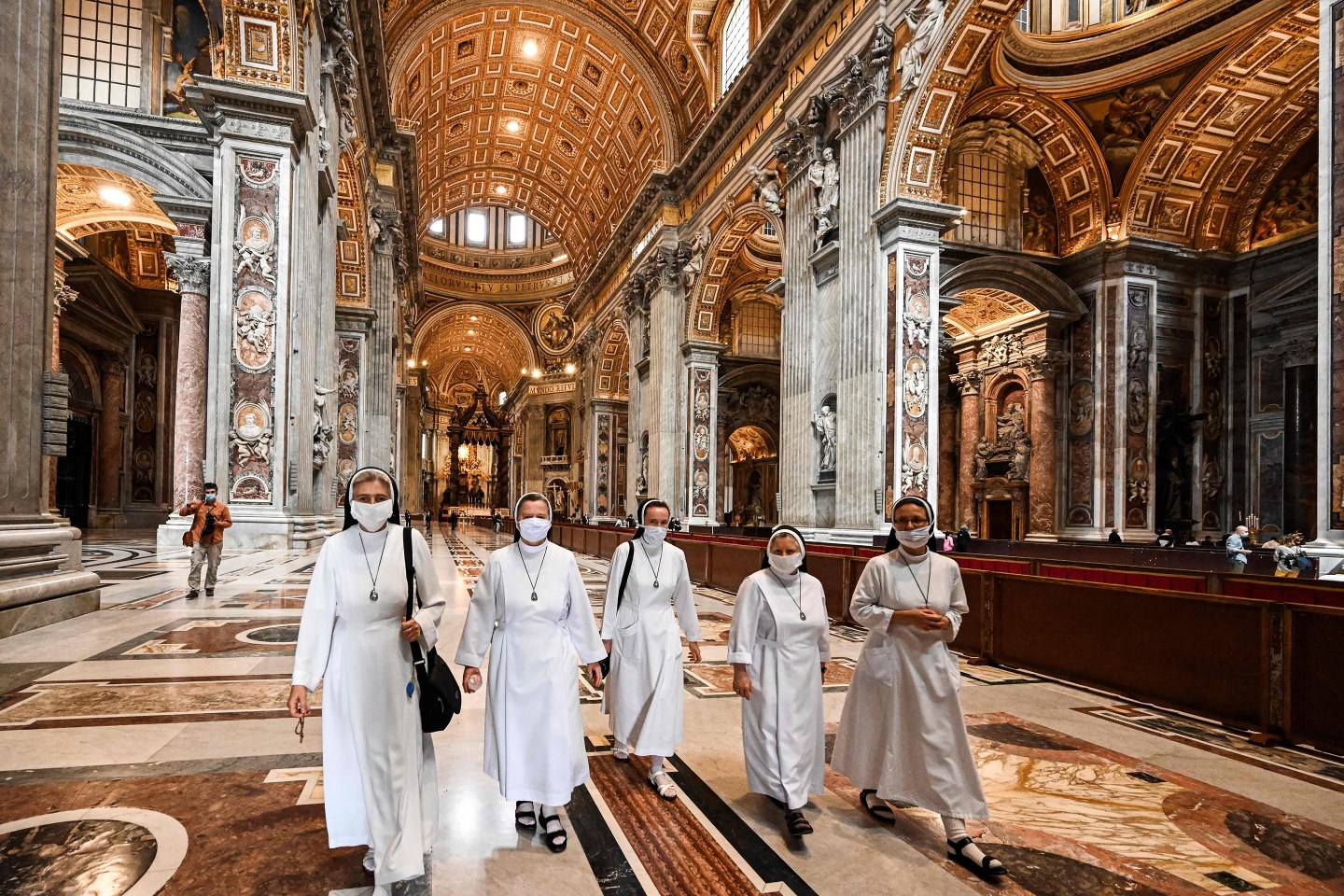 TOPSHOT - Nuns visit St. Peter's Basilica as it reopens on May 18, 2020 in The Vatican during the lockdown aimed at curbing the spread of the COVID-19 infection, caused by the novel coronavirus. - Saint Peter's Basilica throws its doors open to visitors on May 18, 2020, marking a relative return to normality at the Vatican and beyond in Italy, where most business activity is set to resume. (Photo by Vincenzo PINTO / AFP) (Photo by VINCENZO PINTO/AFP via Getty Images)
Vincenzo Pinto—AFP/Getty Images

On a side street around the corner from the Pantheon in Rome’s centro storico, locals again this week spotted a familiar sight: a crowd queuing to get into the church of San Luigi dei Francesi. Even by Roman standards, this is not any old church. It holds the Caravaggio masterpiece The Calling of Matthew—a must-see for any visitor to the Eternal City.

For 10 long weeks, art lovers have been living in a kind of purgatory: a city full of masterpieces—from Michelangelo’s The Last Judgment in the Sistine Chapel to Bernini’s sculpture Apollo and Daphne to Marcel Duchamp’s urinal—all off-limits to the public. The Italian government finally eased stay-at-home measures this week, permitting museums to reopen. Churches, another rich source of art treasures (Leonardo da Vinci’s Last Supper is housed in a convent in Milan), opened their doors on the same day as museums, and Italians, a few at a time, could reacquaint themselves with the treasures of the past.

But things aren’t fully back to normal. Most museums only accept visitors who book in advance. And some must-see landmarks, including Florence’s Duomo, hand out sensors, insisting ticket-holders fasten them to their clothing. To enforce strict social distancing rules, the sensor buzzes whenever it comes within a few feet of another sensor.

Other safety measures are strictly enforced: Masks are obligatory, and at many museum entrances, visitors are required to apply hand sanitizer.

Outside the museums, it still looks like a different Italy: a country without tourists. Rome’s Piazza Navona and Trevi Fountain, usually mobbed in early May with visitors speaking all kinds of languages, are nearly vacant. It makes for an intimate—if not spooky—scene.

Scroll below to explore scenes from Italy this week.