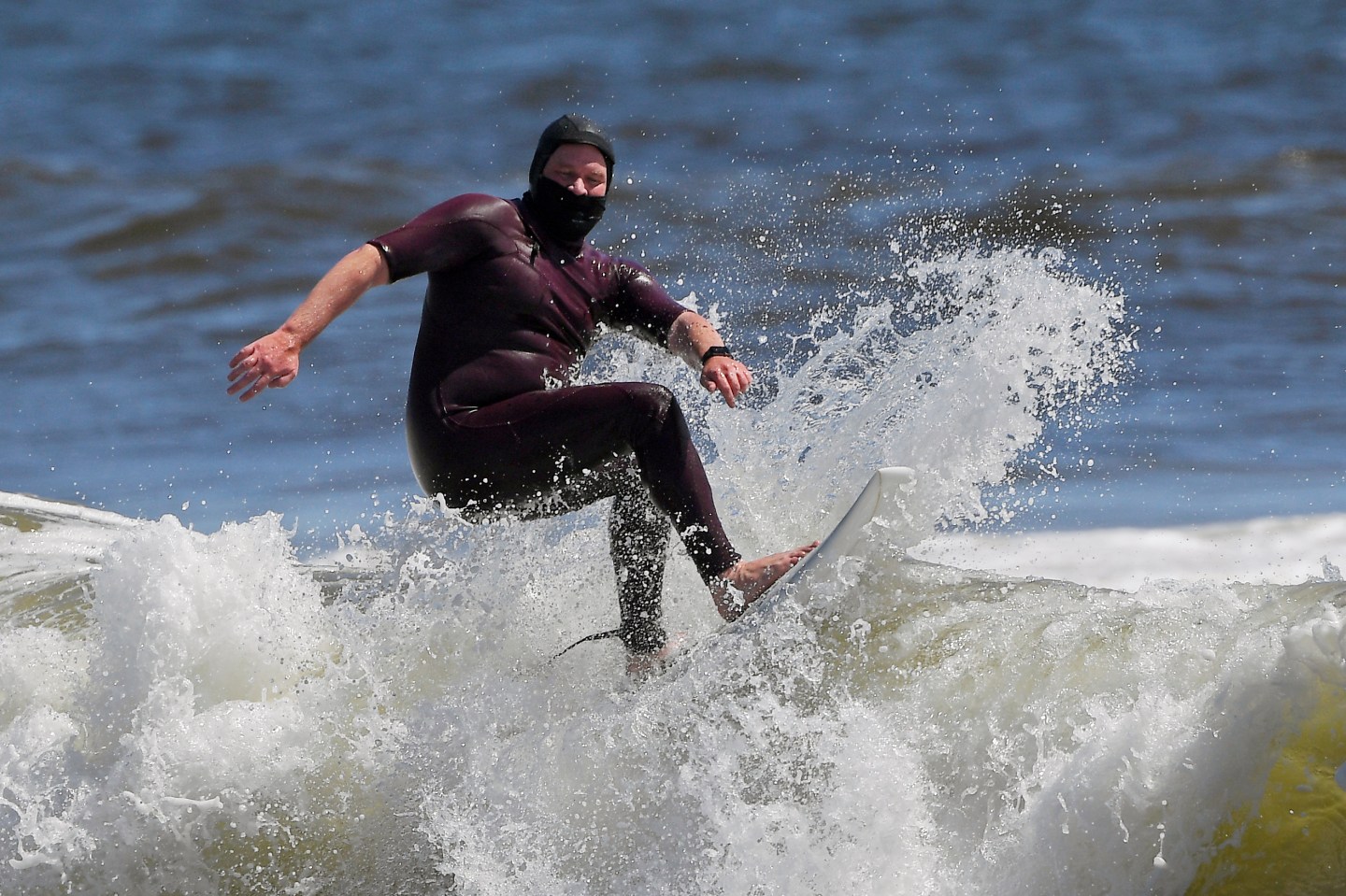 They arrived at the beach by car, skateboard and on bare feet. They carried Frisbees, cameras and surfboards. They wore running shorts, yoga pants and wetsuits.

That was the starkest difference this week apart from a moment in time in March that seems hard to conjure now — before beaches closed and face masks seemed like an extreme and maybe even ineffective protection from coronavirus.

No longer. Masks are now required at Los Angeles County beaches, which reopened Wednesday, to join counterparts in other states that have allowed a somewhat limited return to famed stretches of sand.

“You get some side eyes if you don’t wear a mask,” said Tom Ventura, who sported a light blue face covering with white polka dots while cooling down after his morning run Thursday in Santa Monica.

Along the California coast and in states known for silky sands, warm waters and ample sun, the surf is up along with a new set of rules posted in the time of the coronavirus pandemic.

Beachgoers in LA County have to remain active — walking, running or swimming. No sunbathing. No picnics. No volleyball. Parking lots, piers and a popular 22-mile (35.4-kilometer) bike path that strings together Santa Monica, Venice, Manhattan and Torrance beaches are also closed.

Similar rules are in place throughout the state, as well as in Florida and Hawaii, though masks are not required at many beaches. Tanning and even picnics are permitted in some places, though people are generally told to only spend time with family members and not gather in large groups.

While beaches in South Florida — Miami and Hollywood — remain closed, beaches in Pinellas County on the Gulf of Mexico allow chairs and towels in the sand but limit groups to no more than 10 people. Signs urge people who don’t live together to remain 6 feet (1.8 meters) apart.

“I think it’s a little much, especially being outside with the sun and everything,” said Britt Mask, a Georgia man on vacation with his family at Indian Rocks Beach, near Clearwater, Florida. “I understand why it’s being done.”

In Hawaii, exercise is allowed on beaches on Oahu, but Honolulu police warned people sitting on the sands of Waikiki that they needed to be in the water or moving along.

In Greece, with an early heat wave hitting the country over the weekend, more than 500 organized beaches — where umbrellas and lounge chairs are available for hire — were opening Saturday morning, with strict social distancing measures. Free public beaches opened a few weeks ago. Authorities issued warnings when some crowds formed, but beach-goes generally appeared to heed health guidelines.

Beaches closed in many places as stay-at-home orders got stricter after people, who were allowed to exercise, took the opportunity to escape confinement and flocked to the coast on balmy weekends. Public health officials were concerned large gatherings could allow the virus to spread.

Andrew Noymer, a public health professor at the University of California, Irvine, said it was sensible to start reopening beaches and see how it goes. People should make their own risk assessment, but he said the sun helps kill germs and the virus is less likely to spread in the ocean.

“We have to start reopening the United States slowly and smartly. We can’t just keep everyone locked inside for 12 months,” Noymer said. “If we can’t run on the beach then how on Earth can we go to a restaurant or a movie theater?”

A day into the Los Angeles reopening Thursday, turnout was lighter than the day before.

“Yesterday was like the first get-out-of-jail-free card,” said Peter Moore, who was wearing a white hospital-style mask and walking with his wife and dog. “If they open up the parking lots, we’ll see if people are sitting on top of each other. There’s a lot of sand out there.”

The biggest challenge for lifeguards was reminding people they needed to wear masks, said Pono Barnes, a spokesman for LA County Fire Department.

Surfer Lana Song, who was overjoyed to be back in the water after the closure upended her morning ritual and led to her gaining 5 pounds (2.3 kilograms), was confused about the mask rule that applies on land but not water. She didn’t know where she would put a mask while riding waves.

Mlak Sahli, a student from Saudi Arabia studying public health, said it felt liberating to return even though a police officer shooed her and a friend for sitting on the beach.

A small group of surfers were treated to a rare sight when a pod of about 20 dolphins surfaced and swam by, said Peter Lockwood.

Lockwood said he wasn’t concerned about catching the virus in the water.

“Not a chance. There was so much air moving there and no one wants to be that close,” he said. “Everyone wants their own wave.”