Sue the Germans? A power struggle between the EU and its biggest member could turn into an epic legal battle 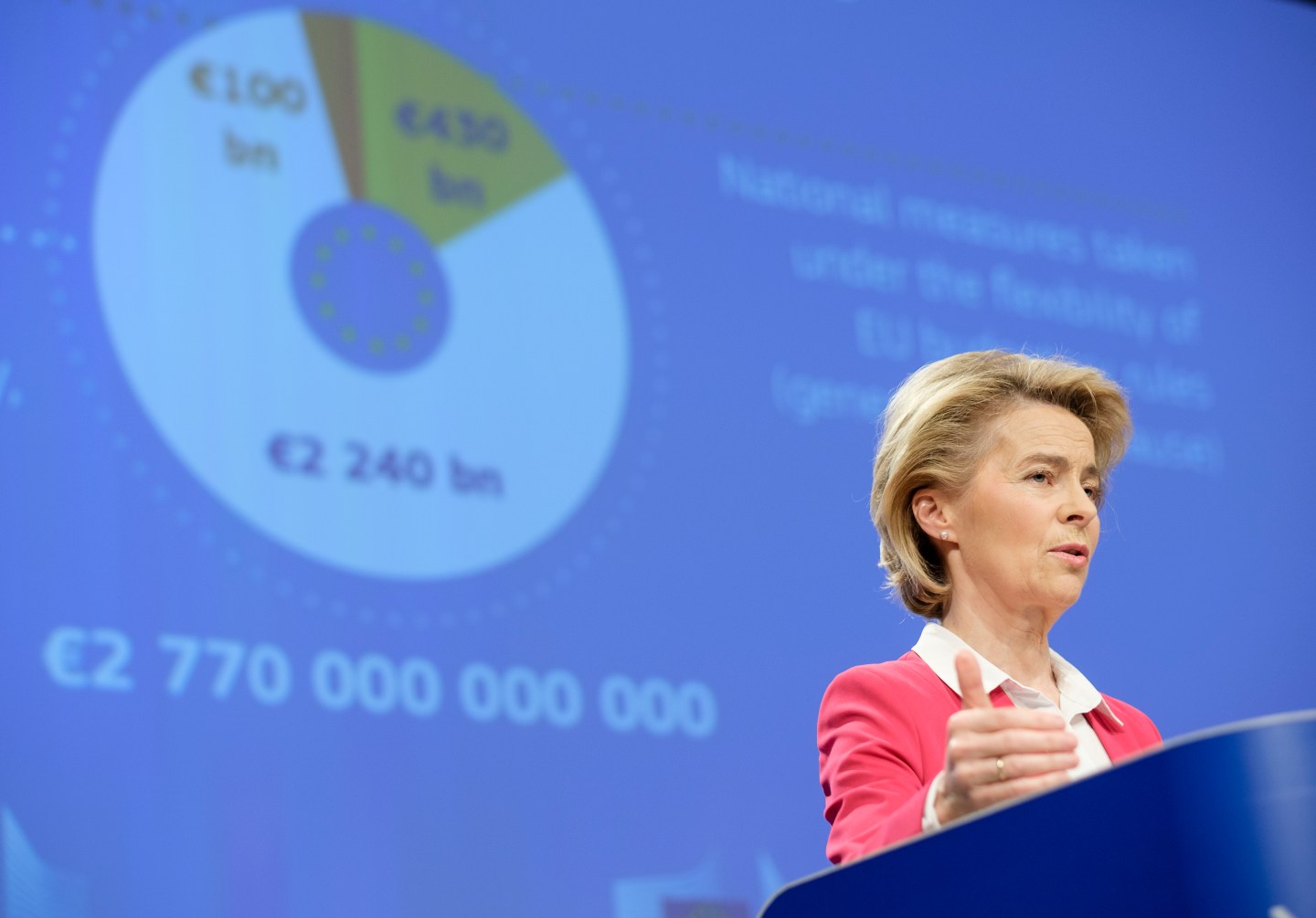 President of the European Commission Ursula von der Leyen speaks to the media at EC headquarter in April in Brussels, Belgium. On Sunday, European the Commission threatened to sue Germany after last week's German high court ruling challenging the mandate of the ECB, and ultimately the authority of the EU. Wire photography: Thierry Monasse—Getty Images
Thierry Monasse—Getty Images

Germany and the European Union are escalating a legal power struggle that could undermine the euro.

On Sunday, the European Commission threatened to sue the EU’s dominant economy after the German top court questioned the legality of the European Central Bank’s bond-buying program. With the 27-nation bloc ravaged by the coronavirus pandemic, the standoff has major implications for the European project itself and the monetary policy that underpins it.

Here’s a look at how the legal nightmare might play out.

1. What infringement would the EU claim?

Germany’s constitutional court decided last week it wouldn’t follow a 2018 judgment by the EU Court of Justice that cleared the central bank’s debt purchases, totaling 2.7 trillion euros ($2.9 trillion) since 2015. But under EU treaties, the top European court ranks higher. The German judges said they could deviate because the bloc’s top judges overstepped their powers when they backed the ECB’s policy in a previous ruling. It was a stinging challenge to the 68-year-old EU tribunal. That prompted a rebuke by European Commission President Ursula von der Leyen on Sunday. “The final word on EU law is always spoken” by the European court, she said. “Nowhere else.”

2. How can the EU sue a member country?

The European Commission, the EU’s executive and administrative body, has the task of policing whether member states are abiding by EU law.

If it finds that an EU country isn’t complying, it has to take action. The commission first informs the country that it’s in breach and tries to negotiate a solution. If that goes nowhere, the commission files a court case.

3. How real is the risk of the case going to court?

This warning by the Brussels-based guardians of the EU doesn’t necessarily trigger an infringement procedure. Yet von der Leyen also has to consider the deterrent effect. “The commission cannot simply ignore this challenge to EU law,” Miguel Maduro, a former advocate general at the EU Court of Justice, said in an interview. Otherwise, such national challenges “might be replicated by other states. What would the commission do if the Hungarian constitutional court or the Polish constitutional court, or others, do something like this.”

4. Is there a road map for such lawsuits?

So-called infringement proceedings aren’t unusual. Most of them don’t make headlines because they often address very technical questions on EU regulations. However, they’ve usually resulted in a kind of give-and-take where EU complaints are resolved with policy changes or, in extreme cases, fines. Yet it’s unlikely that Germany’s top court would reverse its ruling if the European court ruled against it. That could trigger an institutional crisis for the EU. “Making this statement that they’re considering opening an infringement procedure without actually opening it is a smart, prudent approach,” Maduro said.

The EU can only sue member states. That kicks in if an institution in a country—even a court—allegedly breaks EU law. Under international law, countries need to ensure that their agencies are in line with the law and must fix any transgressions.

6. Which court would hear the EU’s suit – and is that a problem?

The case would be heard by the EU’s top court, the same one the German judges attacked in their May 5 ruling. A 15-judge panel handed down the December 2018 judgment on the ECB’s asset purchases. Since the court has 27 judges, that gives it some leeway to make sure that all of the same judges don’t rule on this case if it goes to court.

President Christine Lagarde has signaled that the ECB doesn’t plan on taking action, arguing that the institution is accountable to European parliament and remained under jurisdiction of the EU Court of Justice — with national agencies having no say.

Yet there are ways to diffuse the situation. The ECB could write a paper explaining that its policy meets the proportionality test, UniCredit’s Chief economist Erik Nielsen wrote in a note. “While tedious, it’s an easy paper to write,” he said. “After all, according to the minutes of the governing council meeting from 2015 when the program was agreed on, proportionality was indeed considered.”

The document could be released as a study or working paper — without any reference to the ruling — to allow the ECB to cooperate without jeopardizing its independence or being perceived as bowing to national laws.

8. What can Germany do to salvage the situation?

For the German government, the situation is tricky. Its constitutional court has been a hallmark of civil liberties and has very high approval rates with citizens. Its independence is enshrined in the constitution, and the government can’t just order it to reverse a ruling or set it aside.

Behind the scenes, Chancellor Angela Merkel and her team may want von der Leyen to file a lawsuit. If Germany loses that case, its leaders could say it is forced to fix the situation and take measures without causing a constitutional crisis.

9. What are the politics behind the dispute?

German opponents of the use of euro-area bailouts and ECB bond-buying to protect the shared currency repeatedly challenged the policies in the country’s courts, which until last week broadly went along with the rescue measures. Former German Finance Minister Wolfgang Schaeuble, a veteran of Europe’s bailout battles, warned that letting nations cast doubt on the EU court’s authority could eventually threaten the euro’s survival.

—The Rebuild Program: A project to help small businesses reopen amid a pandemic
—The pandemic makes the case for more transparent layoffs
—Reopening of Shanghai Disneyland is a proving ground for pandemic-era theme parks
—Photo essay: What life looks like in Europe as the continent starts to reopen
—Goldman Sachs doubts there will be a Round 3 of PPP loans for small businesses
—Most college students won’t get stimulus checks—but they should
—How the film industry is planning its post-pandemic return
—PODCAST: How Marc Benioff is helping out during the coronavirus pandemic
—WATCH: Fortune’s top 10 heroes of the coronavirus pandemic