Photo essay: What life looks like in Europe as the continent starts to reopen 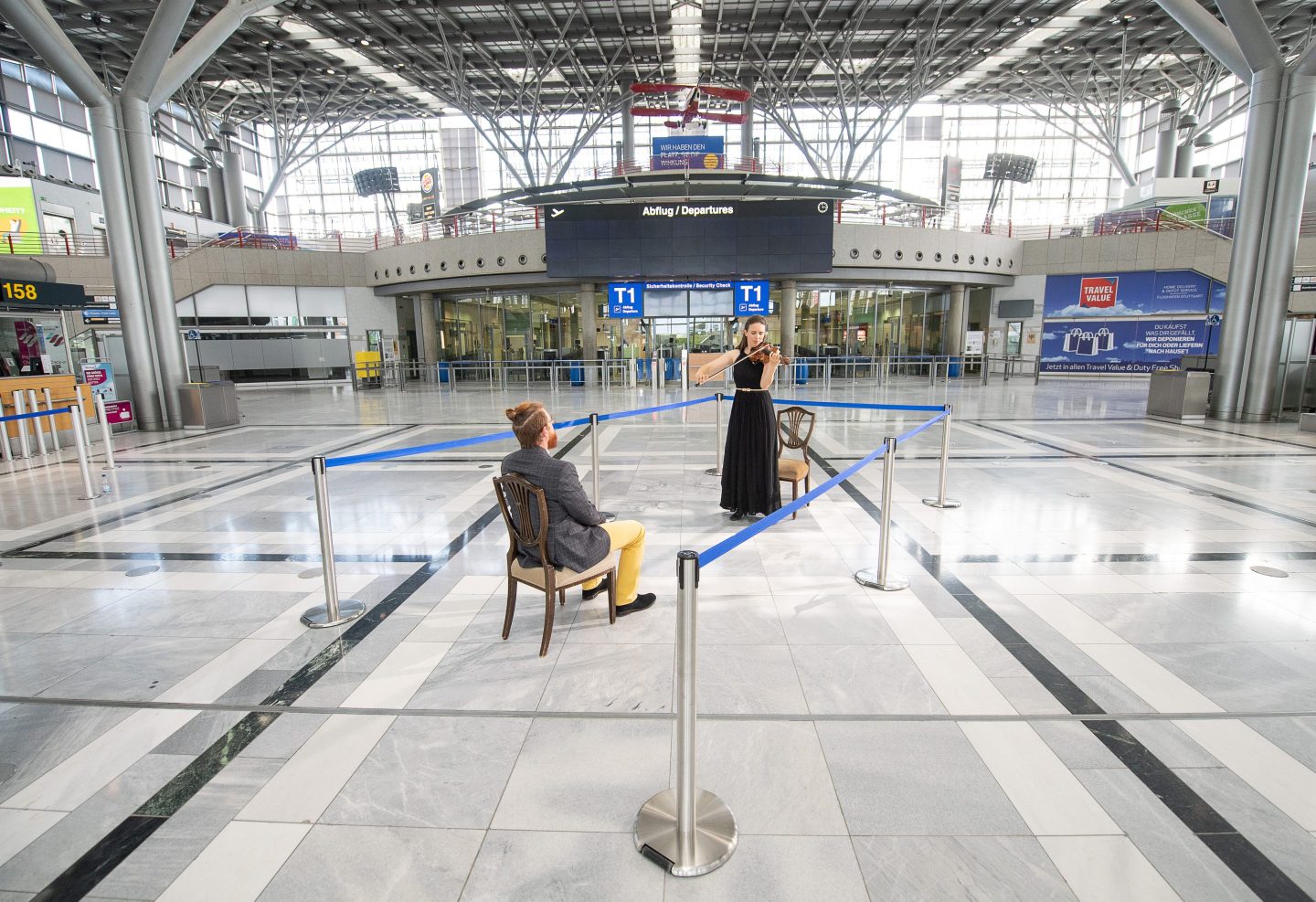 dpatop - 04 May 2020, Baden-Wuerttemberg, Stuttgart: Elena Graf, 1st concertmaster of the Stuttgart State Opera, plays for a listener on the violin during the shooting of a trailer for one-to-one concerts of the Stuttgart Opera in Terminal 1 of Stuttgart Airport. The concerts will take place on 8 and 10 May. A musician plays ten minutes each for a single listener. All musicians play free of charge, with the donations of the guests freelance musicians are supported. Photo: Sebastian Gollnow/dpa (Photo by Sebastian Gollnow/picture alliance via Getty Images)
Sebastian Gollnow—picture alliance/Getty Images

In Italy, it’s now possible to pick up an espresso and a pastry. In Austria, it’s suddenly an option to get a haircut. In Germany, you can go to a car dealership, maybe even stop by a museum.

Within a week or two, other pleasures that were once considered routine—like going to a restaurant—will return across much of Europe, as countries gradually lift lockdown measures and nudge economic and social activity back to life. It doesn’t quite represent a return to “normal,” but for millions of Europeans, it does represent a reminder of what normal used to look like, now in a deeply altered state.

In Italy, which was hit the earliest and arguably the hardest by the outbreak in Europe, this progress is particularly bittersweet—and highlights vast disparities within the country. While the severity of the pandemic has drawn out inequalities across social and economic lines, cruelly translated into death rates, the divide has largely been geographic.

The wealthy north, the industrial hub of the country, suffered brutal months of war-like conditions in hospitals as people died in the tens of thousands—producing stiff resistance to reopening too early. The south, which is far poorer, by contrast has been largely spared the worst.

There are other disparities too. While reopening has already begun in Switzerland and Portugal, for example, the gradual easing of lockdown conditions won’t begin in France until next week. In the U.K., which went into lockdown later than most of continental Europe and now has more deaths than Italy, the government is under pressure to reveal even the initial details of how the country will emerge. Prime minister Boris Johnson is expected to announce the details of a reopening next weekend.

Europe’s reopening, and China’s before that, hold plenty of lessons for the U.S. In Fortune’s series on the reopening across seven Chinese cities, residents describe a daily reality that is inextricably changed—even as the darkest days of the lockdown, according to a college student in Wuhan, already seem like distant memories. The main narrative seems to be an extension of a message that has gained momentum since the beginning of the pandemic: Daily life will be altered for some time, maybe forever—but people will find a way to adapt.

The reopening is not purely hopeful, either—it comes with serious risks. Scientists have warned since the start of the year that a reopening can bring a second spike in infections. Some Chinese cities have already seen this happen, particularly as travelers from harder-hit regions return.

The economic case for reopening is not as clear cut as it might seem, either. Economists warn that a poorly timed and planned reopening, without sufficient testing and tracing systems, can not only not help the economy—it can hurt it.

Barbershops and cafés may reopen—but people need to feel safe enough, and have enough trust in their governments, to actually use them.

At Naples Central Station on May 4, travelers file the self-certification form with which they state the origin and the reasons for the trip.
Fabio Burrelli—NurPhoto/Getty Images)
A man serves takeaway coffee at a Rome cafe.
Yara Nardi—Reuters
AC Milan’s Gianluigi Donnarumma wearing a protective face mask as he arrives at Hospital Clinica La Madonnina for general medical tests after Italy allowed Serie A teams to start training individually.
Daniele Mascolo—Reuters

On May 3, churches and other houses of worship were allowed to hold service. Here, at St. Remigius Catholic Church, Sunday mass communion.
Andreas Rentz—Getty Images
Hairdressing salons are allowed to open after a weeklong compulsory closure. In Stuttgart, a customer sits with a face mask.
Sebastian Gollnow—picture alliance/Getty Images

A sign informs customers of social distancing measures at a shop in Croydon on May 4. With the economy reeling, U.K. Prime Minister Boris Johnson is now under pressure from businesses and members of parliament to explain how and when he will loosen coronavirus lockdown restrictions.
Jason Alden—Bloomberg/Getty IMages
A shopkeeper, wearing a protective face mask and disposable gloves, adjusts a display of fruit and vegetables at a grocery store in London on May 4.
Jason Alden—Bloomberg/Getty Images

On May 5, workers paint lines on the street, expanding a sidewalk for pedestrians to maintain social distance between them, as the spread of the coronavirus continues in Barcelona.
Nacho Doce—Reuters

In Athens, a municipal employee in protective equipment disinfects a school on the first day of the relaxation of the nationwide restrictions, May 4.
Angelos Tzortzinis—picture alliance/Getty Images
Migrants with face masks from the Moria camp, who arrived by ship from the island of Lesbos, stand in the port of Piraeus near Athens after their arrival on May 4. Greek authorities transferred some 400 migrants, mostly families, to the mainland to ease the situation in the overcrowded camp.
Angelos Tzortzinis—dpa/picture alliance/Getty Images
A bus driver wears a mask in Athens. In Greece, citizens have been able to leave their homes without restrictions since May 4 but are not allowed to travel to another prefecture.
Socrates Baltagiannis—picture alliance/Getty Images

—The Rebuild Program: A project to help small businesses reopen amid a pandemic
—Saving lives vs. saving the economy is a false tradeoff, economists say
—States can’t access emergency COVID-19 election funding because of steep match rates
—Unemployment claims are taking some states weeks to process. What to know
—Inside China’s reopening: 7 personal stories of life after lockdown
—How to play live pro sports in a pandemic? Taiwan, South Korea offer lessons
—Work from home, online grocery shopping, cord cutting: What coronavirus trends will stick
—PODCAST: How Marc Benioff is helping out during the coronavirus pandemic
—WATCH: Fortune’s top 10 heroes of the coronavirus pandemic