International ·How to Reopen 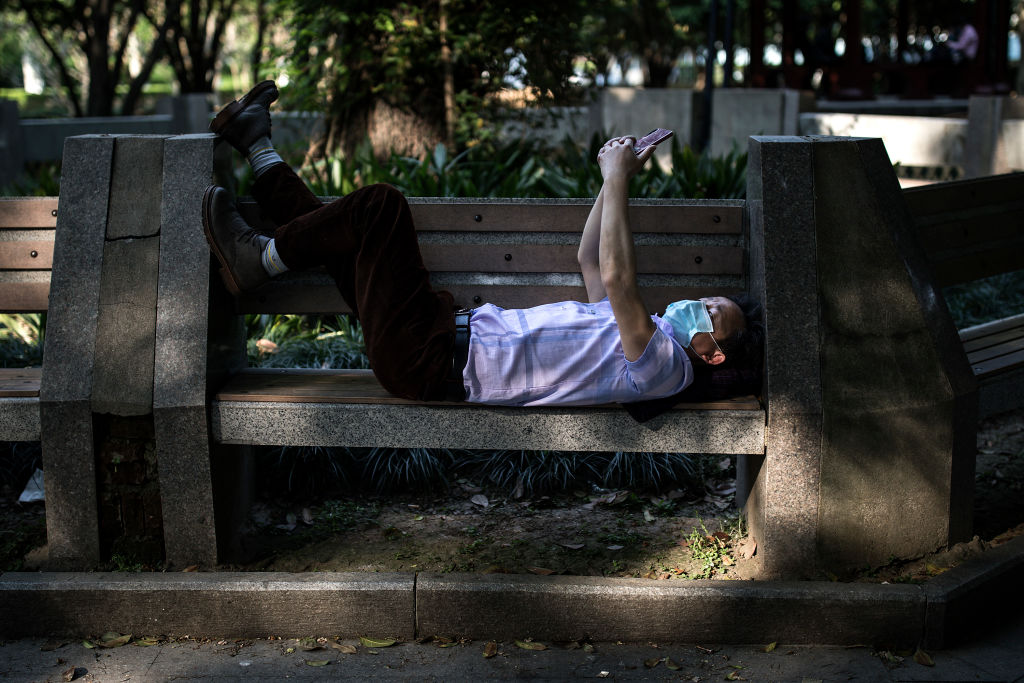 WUHAN, CHINA - APRIL 28: (CHINA OUT) A man relaxes in Zhongshan Park on April 28, 2020 in Wuhan, China. Zhongshan Park re-opened to the public as the government started lifting outbound travel restrictions placed on April 8 after almost 11 weeks of lockdown to stem the spread of COVID-19. (Photo by Getty Images)
Getty Images

This is part of a series on China’s emergence from coronavirus lockdowns, featuring seven people who are living it.

White spring blossom petals dusted the sidewalks of Wuhan, China, when the city emerged from its massive coronavirus lockdown—the first the world had seen—on April 8. The date marked nearly three months since Zhexuan Huang had left his apartment complex in the city’s Jianghan district, where he lives with his parents and grandmother.

His first outing was a stroll around nearby Xibei Lake, which he called “one of the best walks in my whole life.”

But for Huang, the sense of relief goes only so far. In the weeks since the lockdown lifted, he’s taken regular trips to the lake, but he hasn’t stepped foot in a restaurant or on public transportation, underscoring how public trust is crucial in returning Wuhan and its peer cities to “normal.”

Huang isn’t there yet. “I just don’t want to take a risk,” he said.

Huang, 21, was supposed to be on the University of Pennsylvania campus on Jan. 23, when Wuhan and two other cities in China’s Hubei province went into lockdown to prevent the spread of the coronavirus.

Instead, Huang, a sophomore who studies mathematical economics, was at home in Wuhan with his family, waiting for his student visa to be renewed. He didn’t get his passport back in time for his flight to Philadelphia. He was still waiting for it when the lockdown came and the government banned all travel out of Wuhan, the epicenter of what would become the global coronavirus pandemic.

At the time, Penn told him remote learning wasn’t possible. When the university ultimately moved all classes online in March because of the virus, Huang had already been forced to take the semester off.

Adjusting to his new, isolated reality was “a gradual, emotional process,” Huang said. After he realized he wouldn’t be returning to college, he tried to find companies in Wuhan offering remote work or internships. None were. “I had all the free time that I needed in the world,” he said.

He tried to teach himself French. He took up piano again—he’d been playing since he was 6—and practiced for two hours every day. He loves to play classical music, Chopin in particular.

He learned to cook. Huang and the other tenants in his building ordered groceries as a group, and a government-designated courier delivered them to a central drop-off point. Huang would retrieve his family’s goods and deliver his elderly neighbors’ orders to their doorsteps.

“It’s kind of funny, when I was on campus I really missed Chinese food, but when I’m at home I guess I miss Western cuisine,” Huang said. All the restaurants were shut, and takeout had ceased, so he watched Gordon Ramsay cooking tutorials and cooked steaks and salmon for family meals.

During the most intense period of lockdown, from mid-February to mid-March, he often stood on the balcony of his second-floor flat and stared at the two-lane road below, in normal times buzzing with traffic and passersby, now silent and empty of life. There was “pretty much no sound,” Huang said. “There was no one walking on the street.”

When the lockdown ended, Huang registered the next day for a Wuhan city health code, a downloadable mini-program on WeChat, after hearing about it on local news. He entered his name, address, and national identity card number, and answered questions about possible coronavirus symptoms.

The moment Huang and his parents received their green QR codes—required for leaving and entering their compound—they headed to Xibei Lake and its surrounding park. It was the first time Huang stepped outside his apartment complex since Jan. 12.

Many restaurants remain closed. The ones that have reopened offer delivery or outdoor seating and require patrons to undergo a temperature check and show a green health code. Huang hasn’t dined out yet or traveled anywhere in Wuhan besides the lake. He said he might finally feel ready to use public transportation again in a few weeks.

There’s “no specific reason” Huang is waiting to venture about. “I’d just rather wait for more time to pass,” he said.

Despite his misgivings, Huang said the lockdown already feels “like a long time ago.” He has the sense that “everything’s getting back on track.”

On April 27, Wuhan hospitals had discharged all coronavirus patients and the city recorded no new cases. Wuhan’s total confirmed cases stood at 50,333, and the official death count was 3,869 for the city of 11 million. Huang said none of his immediate family or friends got sick.

Many of his college friends from China returned home after classes went online, so it’s easier to talk to them now that they’re in the same time zone. He visits the park to walk or run around the lake every day. “Life is just too good compared to the last two months,” he said.

Huang plans to return to Penn in the fall. He knows the outbreak isn’t over—asymptomatic cases are a worry—but the lockdown feels distant to him, and he struggles to remember some details of life “back then.”

“It feels like history. There’s definitely some things in my life that kind of remind me of the period, like you still have to wear masks every day,” he said. “But the freedom is just—it feels really different.”

Read the other stories in this Fortune series:

—A Shenzhen entrepreneur gets a 6 a.m. throat swab and mandatory quarantine
—A tech founder in Chengdu returns to a changed workplace
—A Shanghai consultant eschews a contact-tracing app
—A startup operations manager in Hangzhou sees automation accelerating
—A Beijing tech worker needs a quarantine certificate to dine out
—A Harbin university professor confronts a second lockdown