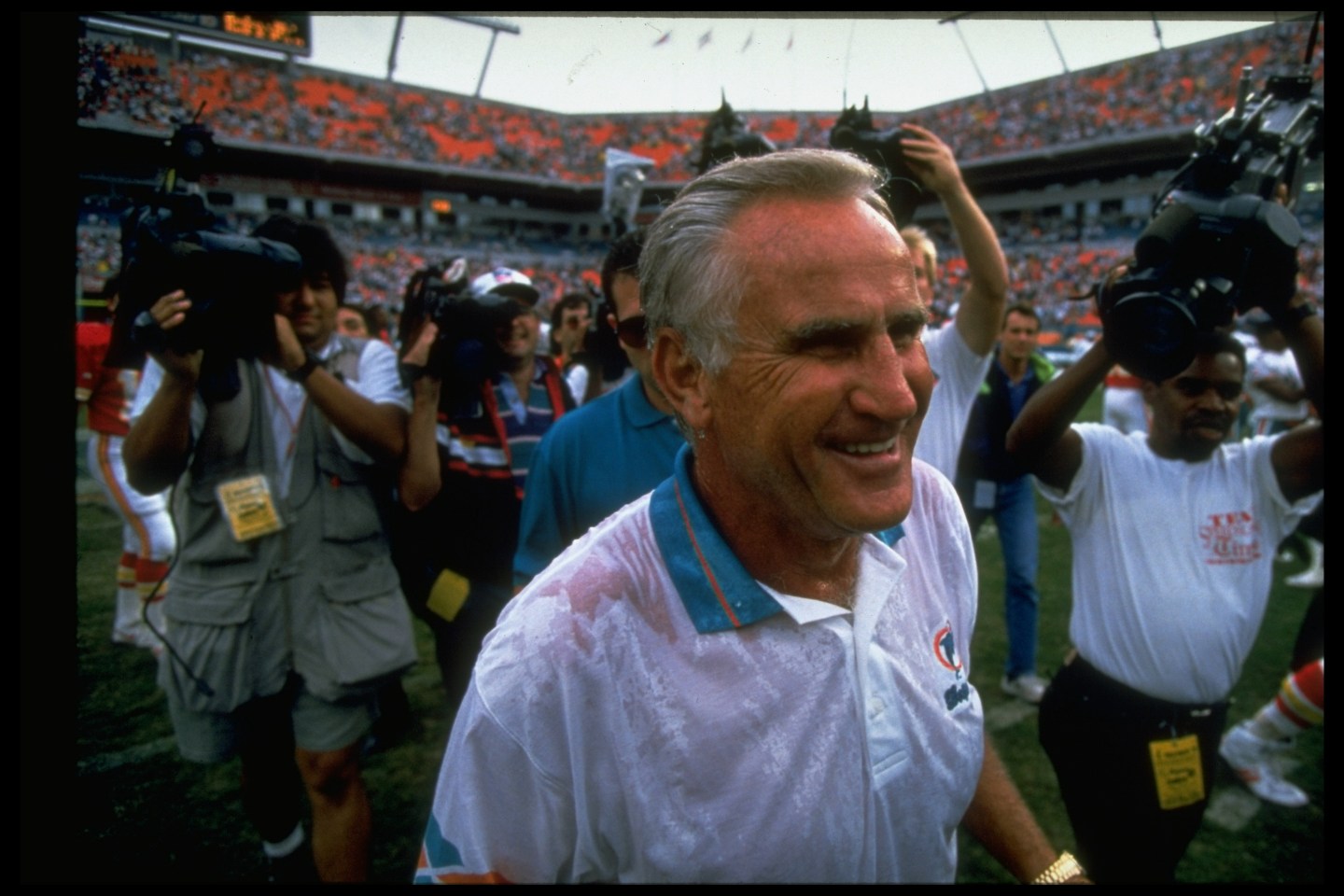 Don Shula, who set a standard for sustained excellence during a 33-year career as head coach of the Miami Dolphins and Baltimore Colts of the National Football League, has died. He was 90.

He died Monday at his home, the Dolphins announced on Twitter.

Victorious in two-thirds of the games he coached, Shula retired in 1995 with an NFL-record 328 regular-season wins, 10 more than George Halas, who coached the Chicago Bears for 40 years. Nineteen post-season wins — including victories in two Super Bowls — boosted Shula’s overall career mark to 347 wins, alongside 173 losses and 6 ties.

His achievements included guiding the only perfect season in NFL history, achieved by the Dolphins in 1972. He was elected to the Pro Football Hall of Fame in 1997, his first year of eligibility.

“Everybody bought into what he believed in, that winning attitude, and that’s why they were so successful for so long,” former Dolphins quarterback Dan Marino said of Shula in a 2013 ESPN program.

Bob Griese, who preceded Marino as quarterback and shared in Shula’s two Super Bowl victories, added, “Because he coached in different eras — in the 60s, the 70s, the 80s, and the 90s — he had his disciplines, and he had his rules and regulations, but he also adjusted to the athletes, what their talents and their personalities were.”

Shula played under head coach Paul Brown on the Cleveland Browns in the 1950s and embraced Brown’s classroom style of leading players.

“Paul believed that everything stemmed from learning,” Shula wrote in “The Winning Edge,” a 1973 book co-written by Lou Sahadi. “He said that you learn by seeing, hearing, writing, practicing and reviewing.”

Where Brown was “stand-offish and aloof with his players,” however, Shula said he aimed to be more approachable — “talking and joking a little instead of making everything so serious.”

Donald Francis Shula was born on Jan. 4, 1930, in Grand River, Ohio, the third of six children of Don and Mary Shula. His father, an immigrant from Hungary whose original family name was Sule, worked on a fishing boat.

Helping care for the triplets who were born after him was “my first coaching job,” Shula wrote in his memoir.

He played football in high school and at John Carroll University, a Jesuit college in University Heights, Ohio. He graduated in 1951 with a degree in philosophy.

The Colts named him head coach in 1963, when he was 33. With Johnny Unitas at quarterback, Shula led the team to seven consecutive winning seasons that all ended on a losing note, including in Super Bowl III against the New York Jets.

Joe Robbie, founding owner of the Dolphins, signed Shula before the 1970 season. Starting in 1971, Shula’s Dolphins made it to three consecutive Super Bowls, losing the first, to the Dallas Cowboys, then winning against the Redskins and Minnesota Vikings.

When U.S. President Barack Obama in 2013 hosted the 1972 team at the White House — an annual honor extended to Super Bowl champions that was not yet established in the early 1970s — Shula presented him with a team jersey with the number 72 and the word “Undefeated.”

“It’s been 40 years, but what the hell, we still feel honored,” Shula said.

Super Bowl losses in 1983 and 1985 conspired to leave one blot on Shula’s resume — a 2-4 record in football’s biggest game. Though the Shula-led Dolphins thrived with Marino at quarterback starting in 1983, the pair never shared a title.

Shula retired following the 1995 season and helped run Shula’s Steak Houses, the restaurant chain he started in 1989. One of his sons, Dave Shula, was an assistant coach with the Dolphins and rose to head coach of the Cincinnati Bengals. Another son, Mike Shula, was head coach at the University of Alabama before becoming an offensive coordinator in the NFL.

In addition to his sons Shula had three daughters — Donna, Sharon and Anne — with the former Dorothy Bartish, whom he married in 1958. She died of breast cancer in 1991. In 1993, Shula married Mary Anne Stephens, ex-wife of Jackson T. “Jack” Stephens, former chief executive of Stephens Inc., a Little Rock-based investment banking company.

—Inside the chaotic rollout of the SBA’s PPP loan plan for America’s small businesses
—Filing for unemployment benefits? What to know before you start your claim
—The latest round of unemployment claims puts real jobless rate near Great Depression peak
—Everything you need to know about furloughs and what they mean for workers
—A Harvard Business School professor reimagines capitalism
—PODCAST: How 2 CEOs outside of health care decided to pivot to fight COVID-19
—WATCH: Why the banks were ready for the financial impact of coronavirus