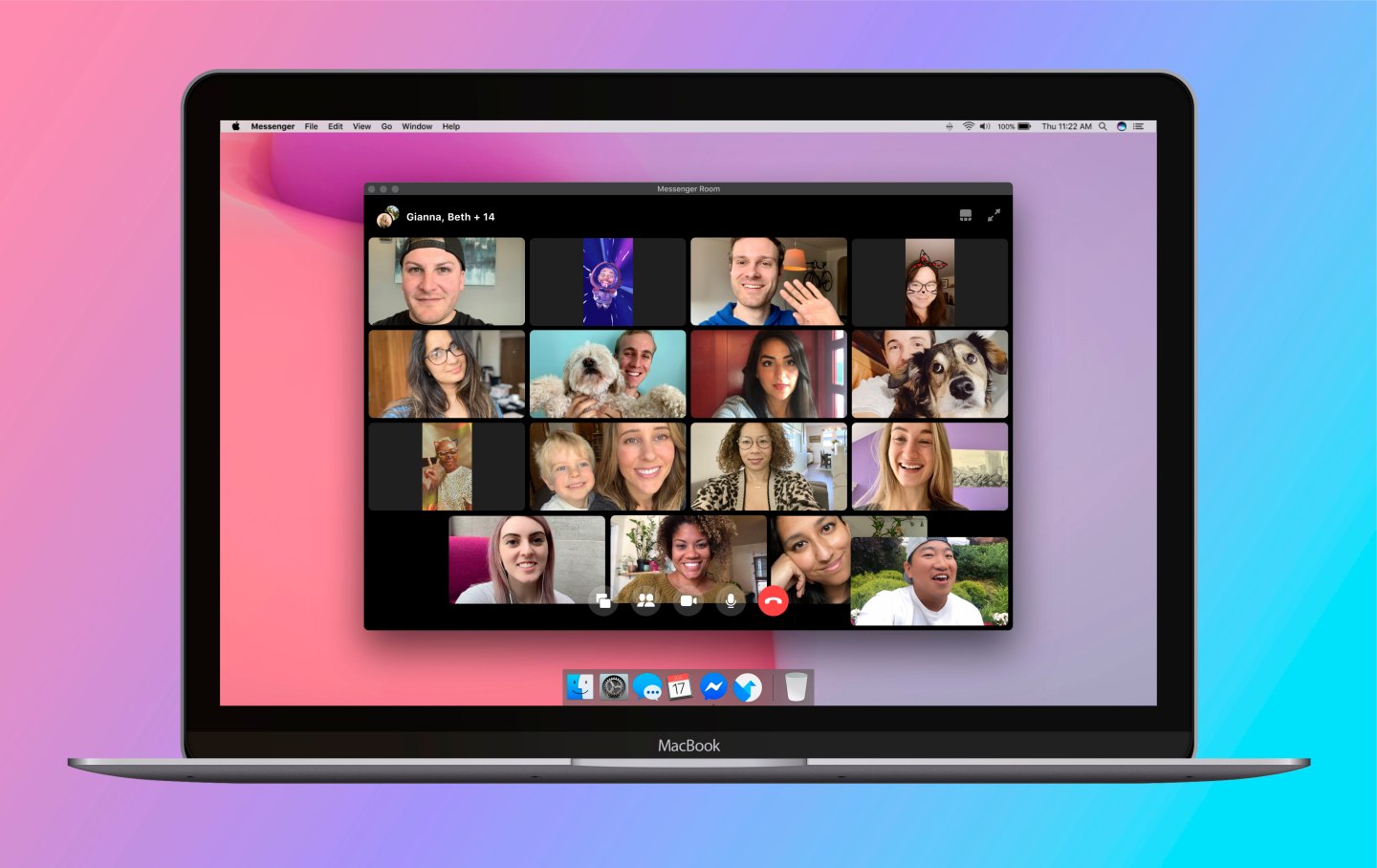 Facebook is rolling out Messenger Rooms, a Zoom-like product that will allow up to 50 people to video chat.
Courtesy of Facebook

Facebook is rolling out a new feature as part of its Messenger service that looks a lot like Zoom as more people video chat during the coronavirus pandemic.

The feature, called Messenger Rooms, will allow up to 50 people to participate in a video chat through a link. While Messenger will host the chat, participants do not need to be a user of any of Facebook’s services to access the room. Rooms can be scheduled for a specific time but can also be spontaneously created. Facebook will show rooms that aren’t set as private to friends that the host actively interacts with by listing it at the top of the screen. That allows friends to pop into a room, even without an invitation.

Facebook has already started to roll out Messenger Rooms. CEO Mark Zuckerberg expects it to be a leading videoconferencing product even though it faces stiff competition from Google and Zoom. Zoom’s stock dropped 10%, trading at $159.87 per share, after the Facebook announcement.

“We already have leading, if not the leading, video calling and live video services,” Zuckerberg said. “I think we’re soon going to have the leading video rooms product for social use cases as well.”

During the announcement, Zuckerberg tried to reassure users that the new feature won’t have the same security issues as “other” services. Zoom, which has experienced explosive growth during the pandemic, has come under fire for security flaws that allow random people to hijack rooms and fill them with hate speech or nude or violent images. Zoom has tried to fix the issues with its latest updates.

“We’ve been very careful to try to learn the lessons of how we’ve seen other people trying to misuse other videoconference and video presence tools during this period,” he said.

Facebook’s latest video product releases were announced over Facebook Live in lieu of original plans to debut them at the company’s annual F8 conference. The tools also come as Facebook is working to make itself a more privacy-focused network with an emphasis on groups and private messaging—all of which have become even more important during the outbreak.

In addition to Messenger Rooms, Zuckerberg announced the company is integrating Facebook Live, a feature that allows users to live-stream, with Facebook Events. This lets users create live streams as part of their events, as more people opt to host virtual events. Zuckerberg said he expects Facebook to “eventually” allow event hosts to charge for live streams so people can make money off things like classes and performances.

“We hope this will help support creators and small businesses that rely on in-person services,” he said.

Facebook is also doubling the number of people who can video chat together on WhatsApp from four to eight and is introducing digital backgrounds for Messenger calls and chats. Zuckerberg suggested that Facebook is raising the bar with new A.I.-powered tools and effects by debuting a 360-degree virtual background that will move and maintain perspective as a user moves around his or her environment.

“It’ll really feel like you’re in a house or jungle or whatever you’re in,” he said.

Zuckerberg said in addition to creating new features to meet the rising demand for video, Facebook is also seeing an uptick in sales of Portal, an in-home video product the company launched in 2018. Sales of the product have grown 10-fold, and the company is “working as hard as we can to make more of them,” he said.

“Overall, we’re very focused on making sure we can deliver for you the tools that you need to make you feel present with the people you care about even during this period where we can’t be together in person,” Zuckerberg said.

—How a pharmacy delivery startup has capitalized on the coronavirus pandemic
—SBA website leaks personal data of 8,000 small-business loan applicants
—Is A.I. better at diagnosing illnesses than doctors? Don’t believe all the hype
—What Seattle and San Francisco can teach us about mitigating the scourge of COVID-19
—Listen to Leadership Next, a Fortune podcast examining the evolving role of CEO
—WATCH: Best earbuds in 2020: Apple AirPods Pro Vs. Sony WF-1000XM3