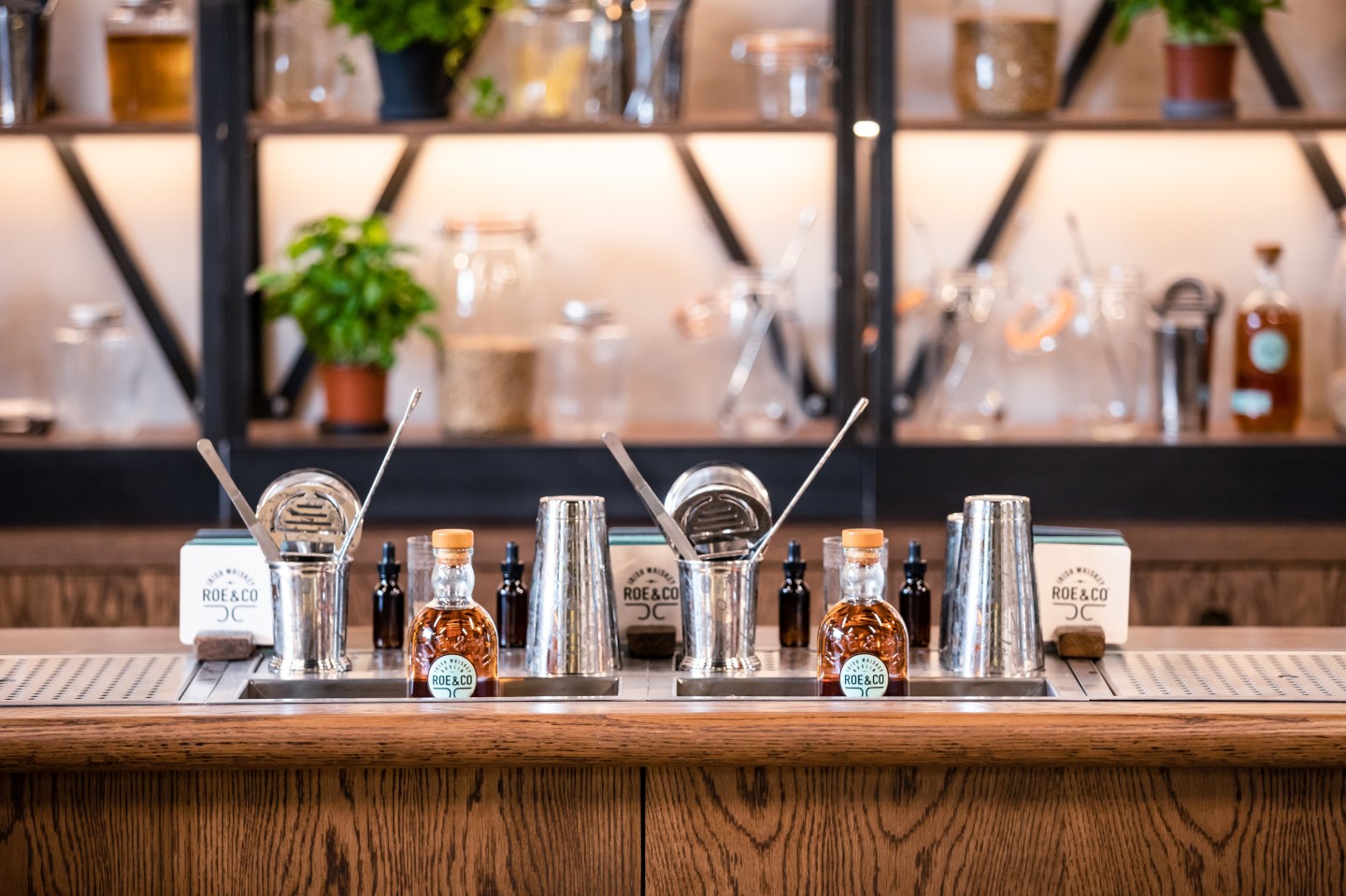 No more just straight or on the rocks. Bartenders at high-end cocktail establishments are rethinking how to use Irish whiskey in cocktails.
Courtesy of Roe & Co Irish Whiskey

Sean Muldoon, cofounder of downtown Manhattan bar The Dead Rabbit, has advice when it comes to crafting Irish whiskey cocktails: Keep it simple.

“The way to make Irish whiskey accessible to the masses is through simple drinks, like an Irish Coffee,” says Muldoon. The Dead Rabbit’s Irish coffee has just four ingredients: an ounce of Bushmills Irish whiskey, sugar syrup, coffee, and whipped cream. The Dead Rabbit sells as many as 2,000 Irish coffees each week, making it the bar’s most popular drink.

Irish whiskey cocktails, mixed with ingredients like ginger ale or soda, aren’t often complex. A straight shot and the Irish Car Bomb (dropping a shot of Baileys Irish Cream into a pint of Guinness) are also basic drink orders. But the category’s most popular cocktail, the Irish coffee, lags rival libations. The margarita, martini, and old-fashioned are all far more popular, according to research conducted last year by Nielsen. Across all major cities and times of the day that Nielsen tracked, the Irish Coffee failed to make the cut.

An Irish coffee made with Tullamore D.E.W.—a signature drink at The Buena Vista in San Francisco.
Courtesy of Tullamore Dew

Often served hot, there are a few things holding the Irish coffee back. It is an annoyance for most bars to make, as coffee and whipped cream are key ingredients that most establishments don’t invest in. The caffeine in the drink limits the Irish coffee’s appeal late into the evening. It is also hard to imagine drinking more than one during a night out.

Despite struggling for a cocktail hit, Irish whiskey demand has boomed. As recently as 2007, Irish distillers were selling less than 1 million nine-liter cases stateside, but sales soared to nearly 4.9 million annually, according to data from industry advocate the Distilled Spirits Council. Irish whiskey volume jumped 8.6% last year in the U.S., research firm IWSR has reported. Jameson, Tullamore D.E.W., Teeling, Proper No. Twelve, and Slane are all growing brands.

“We are in the early stages of creating interest and awareness of what Irish whiskey can be,” says Jack Teeling, cofounder of his namesake distillery.

The Irish weren’t always so lucky. Heading into the 1900s, as much as 60% of whiskey consumed in the U.S. was Irish. But the industry’s decline was brutal, stung by Prohibition, the Irish Civil War, and a trade war with the United Kingdom. There were 100 legal distilleries in Ireland prior to Prohibition but that number dwindled to six by 1945, and further consolidation resulted in just one surviving holding company only a few decades later.

Rising consumer excitement for all whiskeys globally have helped the Irish. There are now 31 distilleries in Ireland, up from only four in 2010.

“Irish accounts in America are stocking a wider range of Irish whiskeys,” says Slane cofounder Alex Conyngham. “To support that, they are making their staffs better educated on the brands and different types of Irish whiskeys.”

The renaissance has led to dealmaking. Within the past decade, Jack Daniel’s maker Brown-Forman acquired Slane Irish whiskey, Beam scooped up the Cooley distillery, and Bacardi bought a minority stake in the Teeling distillery. Diageo, two years after it unloaded Bushmills Irish whiskey, reentered the category in 2017 with the launch of Roe & Co.

Elevating the cocktail experience at bars and restaurants remains an opportunity to propel Irish whiskey to even loftier heights. At The Dead Rabbit, new Irish drinks include a cocktail with freshly extracted apple juice. This month, it debuted an Irish coffee martini, the first time it has sold a cold variation in a bid to boost sales in the summer when demand for the hot drink tends to ebb.

Jameson is on the same page, recently debuting a limited-edition cold brew. “It brings together the familiar flavor of cold-brew coffee with the smoothness of Jameson,” says Matt Foley, Jameson brand director at Pernod Ricard USA. Like many new coffee-based alcoholic beverages that have hit the market recently, Jameson Cold Brew is meant for brunch or as the ideal first drink ordered at night.

With 7.7 million cases sold globally, Jameson is the second-most-popular liquor brand sold by Pernod Ricard, trailing Absolut vodka alone. Sales for the brand, which commands an estimated 80% of the Irish whiskey market in the U.S., have been rising, and new expressions to generate buzz have included Jameson Caskmates and Jameson Black Barrel. But years ago, an effort to popularize the Jameson and Ginger at the local pub was less successful, insiders say.

The Tipperary, made with Chartreuse and bitters, is a classic cocktail that’s making a tepid comeback. Tullamore’s “D.E.W. and a Brew” aims to encourage pairing with stouts, red ales, and IPAs. Proper No. Twelve has been promoting the Knock Out, which is made with ginger liqueur, cinnamon syrup, lemon, and angostura bitters. Roe & Co., a whiskey with tasting notes of stone fruit and pear, is “made to stand up in cocktails” owing to a higher alcohol content than most rivals, says brand director Jason Sorley.

“Some bartenders were hesitant to put [Proper No. Twelve] in cocktails,” says Brian Axelrod, the brand’s U.S. director. “They thought it was more meant for shots. We are trying to change that perception.”

The Irish are also angling to encourage drinkers to enjoy their liquor without any mixers or just a little ice. Kilbeggan Single Pot Still, newly released this winter, has lingering spice notes and is meant for sipping. Slane encourages drinkers to order Slane Rocks, with just a little ice, the way most bourbon is enjoyed.

“With any whiskey, I’d recommend that people try them neat to begin with,” says Jamie MacKenzie, director of marketing at Kilbeggan Distilling Co.

Still, the Irish coffee looms large. Slane holds an annual competition in Chicago challenging bartenders and baristas to make the greatest Irish coffee. Kilbeggan’s whiskey ambassadors partner with local coffee roasters to recommend Irish coffee drinks that can be made with the brand. Muldoon argues that better-tasting Irish coffees are a necessity for the industry’s bars and distillers.

“What can help promote Irish whiskey as a category is that if people like [the Irish coffee], they’ll say, ‘What’s in that drink?’ And you can say, ‘Irish whiskey,’” says Muldoon. “It is a gateway cocktail to build trust.”

—The man behind some of Napa Valley’s most acclaimed wineries
—5 things the CEO of Barry’s Bootcamp always packs when traveling
—Where you should eat, visit, and stay in Marrakech
—This Raja Ampat yacht trip might be the world’s most exclusive escape
—WATCH: Can San Francisco Be Saved?