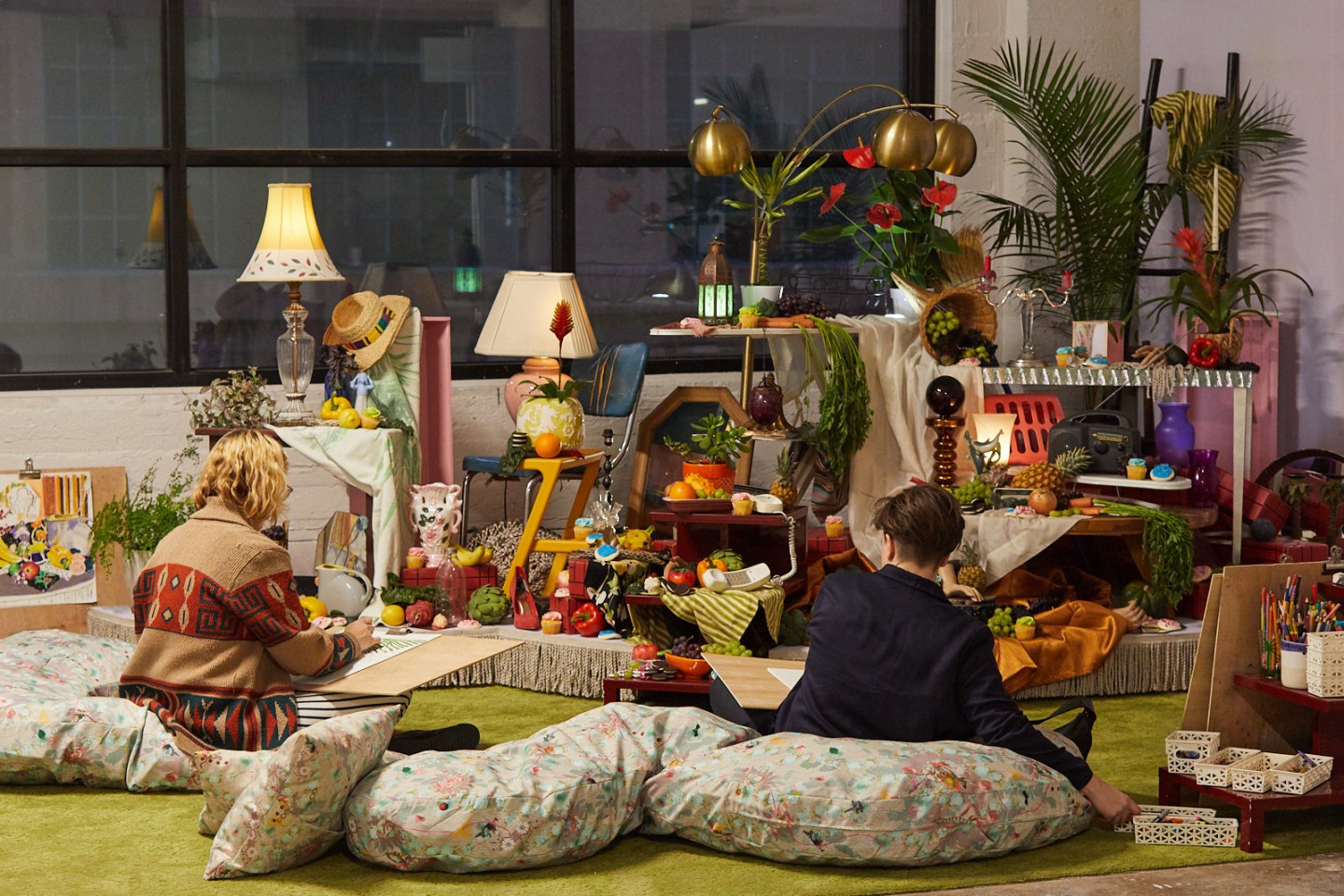 Spring/Break is an exhibition that takes over Los Angeles and New York, exploring the work of emerging, unknown, and mid-career artists each year.
Courtesy of Spring/Break LA

In 2008, Andrew Gori and Ambre Kelly—a filmmaker and a painter, respectively—organized a series of one-night shows by friends in a gymnasium in Manhattan’s Nolita neighborhood.

“When the recession hit, a lot of us were in our mid-twenties, and we just felt like the chances that were being taken on new artists were going to start evaporating,” recalls Gori. To offset the trend and support emerging talent, the duo rented out spaces for a few hours, building them out internally to fit their artistic needs, and showcased a variety of work.

What gives this art show the ability to stand out is its low cost (both the tickets and the space are inexpensive) and its mission to “broaden the dialogue of what constitutes value and economy in a 21st-century city.”
Courtesy of Spring/Break LA

In 2012 the owner of the gymnasium they often occupied approached them about a Catholic parochial school that was to be deconditioned, offering them the space in hopes they could bring people together the same way their shows had until then. Thus was born the Festival of Ideas, which eventually became Spring/Break, now an annual art fair taking place in Los Angeles and New York with plans to expand to other cities.

The message that Spring/Break wants to send begins with its name. “At the time, it felt like there was this sterile elitism within the art world,” Gori says. “To us, naming it something sort of trashy that’s normally lowbrow seemed funny.”

The first installment of the fair was mounted during most colleges’ spring break sessions, and eventually Gori and Kelly began to see the show as a “break from the other, more traditional exhibitions out there.”

Overall, Spring/Break seeks to expand the definition of art, making it more accessible and inclusive by shedding light on relatively affordable works made by a wider population of artists; setting the price of entry at $25; and making use of underused, atypical local spaces.

Hoping to challenge the traditional scope of an art fair, Gori and Kelly select exhibition spaces that, in a way, become art pieces in their own right. “It’s a weird thing that there’s all this beautiful architecture and all these nooks of former history and culture that sort of go abandoned and can be spoken to,” Gori says. These spaces have included a former produce market and textile manufacturing site in downtown Los Angeles and the James A. Farley Post Office and UN Plaza building in New York. Gori and Kelly offer the spaces to showcasing artists for free but receive 35% of each sale. “Enough of our artists do well that it helps pay for the fair,” Gori explains.

Each installment has accommodated between 50 and 100 curated exhibitions featuring works not usually found at the likes of Frieze or the Armory Show. The art, at times, leans toward the abstract, the materials used are more wide-ranging, and the subjects tackled are usually more shocking.

That expanded outlook isn’t lost on Jack Moore, a first-time exhibitor at this year’s New York fair. “I’m definitely meeting a lot of people that don’t usually see my work,” he says. “It’s way more diverse, and you can tell that the people that are coming here really, really love art. It’s not easy to meet collectors, and to have so many people who collect art in one place is a super-amazing connection to make.”

Visually speaking, the pieces seen at Spring/Break are impactful: Screens broadcast sexualized images in one room while hallucinatory concoctions pervade hallways. Spring/Break is the ideal Instagram subject, an art fair for the 21st century—a fact that Gori agrees with but doesn’t associate with the project’s popularity. “Social media might stay forever or go tomorrow,” Gori says. “But I think that human beings, especially because of social media, are needing new outlets for their human interaction and new gathering spaces. I think there is nothing that tops that experience of getting a group of people in a room. It’s almost like church.”

To be part of the quasi-religious experience, artists fill out applications requiring them to explain how their work pertains to the chosen theme. This year, Gori and Kelly settled on “In Excess.”

“Obviously, we’re not anti any fair,” Gori says. “But sometimes you walk into an art fair that feels like a trade show, and we thought that one thing that will make this feel like more of a cohesive experience is assigning a theme so that attendees almost feel like they’re walking into a museum show that they can also buy pieces from.”

Given the success of the fair throughout the years, Gori doesn’t think Spring/Break runs the risk of becoming like the grand shows to which it was born as an antithesis. “Despite growing, despite doing shows in different cities, despite more followers on Instagram, I think that the key thing that will remain the same is continuing to take risks on emerging talent,” he says. “I also think that continuing to show in underused spaces and forcing curators to confront spaces that aren’t ideal and that come with their own coded meanings will keep things interesting.”