For coronavirus-slammed cruise companies, ‘it’s never been like this’ 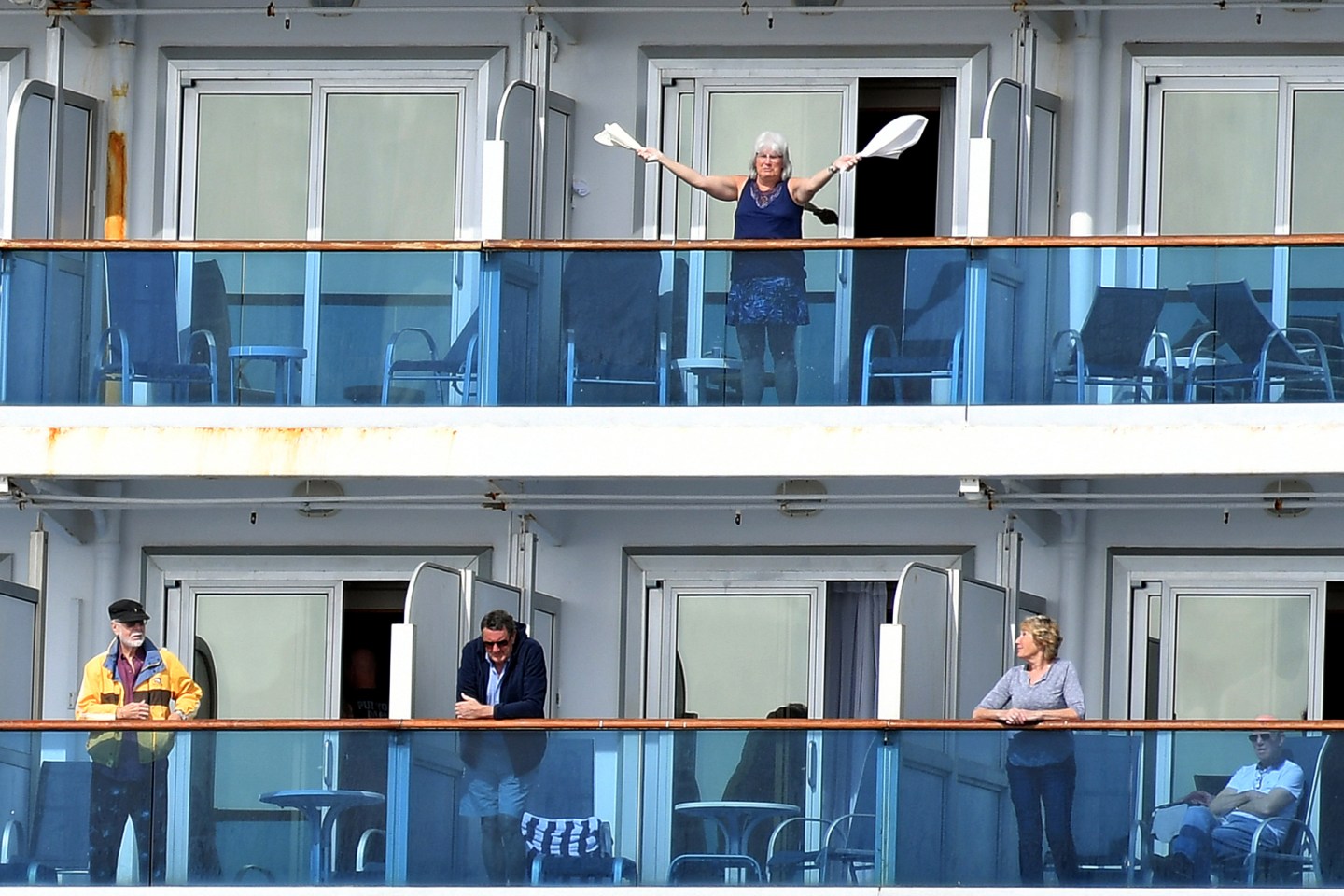 TOPSHOT - A woman gestures as other people look on from aboard the Grand Princess cruise ship, operated by Princess Cruises, as it maintains a holding pattern about 25 miles off the coast of San Francisco, California on March 8, 2020. - California prepared to disembark passengers from a virus-hit cruise ship as officials played down any risk to local communities.The Grand Princess, which has 21 novel coronavirus infections among the 3,500 people on board, is set to dock in Oakland Monday after four days held off the coast of nearby San Francisco. (Photo by Josh Edelson / AFP) / Alternative Crop (Photo by JOSH EDELSON/AFP via Getty Images)
JOSH EDELSON—AFP via Getty Images

It’s official: now might be the worst possible time to set sail with thousands of other humans.

The fun is certainly grinding to a halt for the $150 billion cruise industry. The rapid spread of COVID-19, which stranded thousands of people on two separate Princess ships, took on new menace for cruise operators on Sunday, when the U.S. State Department bluntly warned that “U.S. citizens, particularly travelers with underlying health conditions, should not travel by cruise ship.” The CDC, in only slightly softer language, recommended that travelers “defer all cruise ship travel worldwide.”

The warnings, coming after weeks of terrible headlines about passengers and employees quarantined in claustrophobic cabins and even-more-crowded crew bunks, escalated an industry-wide financial crisis during what is supposed to be cruising’s high season. Shares of Princess owner Carnival Corp., Royal Caribbean Cruises Ltd., and Norwegian Cruise Line Holdings Ltd. have tumbled sharply, cutting $43.6 billion from their collective market value since the beginning of the year through the end of Tuesday, according to Bloomberg. By the end of Tuesday, Carnival shares were down 53% year-to-date, while Royal Caribbean’s were down 61% and Norwegian’s were down 65%.

“It’s never been like this,” says Jaime Katz, a Morningstar analyst who follows the cruise industry. “It’s not good when the state tells you not to go.”

About 32 million people were expected to take a cruise in 2020, according to projections from industry trade group Cruise Lines International Association. But this customer base is particularly likely to be affected by the U.S. government warnings against cruising: About half of cruise ship passengers are North American, according to the CLIA, and about a third are above the age of 60. (“Older adults” are at higher risk of contracting COVID-19, according to the CDC.)

President Trump said Tuesday his administration is “working very, very closely with the cruise industry” and promised to help “them through this patch.” But major cruise companies are already scrambling to slash their expenses and line up new financing. Early on Tuesday, Royal Caribbean Cruises announced that it had secured an additional $550 million of credit, and that it would reduce operating expenses and capital spending to help free up another $1.7 billion of liquidity.

The second-largest cruise operator also withdrew its financial guidance for 2020 and—perhaps most ominously—said that its cost cuts would extend into 2021. “These are extraordinary times and we are taking these steps to manage the company prudently and conservatively,” Richard D. Fain, Royal Caribbean’s chairman and CEO, said in a press release.

Royal Caribbean isn’t alone in feeling new financial pressure from the coronavirus fallout. On Monday, Norwegian Cruise Line Holdings said it had mortgaged one of its ships to secure an additional $675 million in credit from JPMorgan Chase, “given the continued uncertainty surrounding the COVID-19 coronavirus.” The loan boosts Norwegian’s available credit to $1.55 billion.

Meanwhile Carnival, the industry leader and the owner of the now-infamous Diamond Princess, said last month that it expected to see a “material impact” on its financial performance from the coronavirus, which at the time was mostly affecting operations in Asia.

Carnival spokesman Roger Frizzell this week declined to comment on the financial impact of the government warnings against cruising, but pointed out that “while an advisory has been been issued, no restrictions are in place for those who choose to take a cruise.”

He added in an emailed statement that Carnival is “currently in discussions with the CDC, World Health Organization and other health officials,” and had participated in the industry’s Saturday meeting with U.S. Vice President Mike Pence.

The global coronavirus outbreak has already caused Japanese cruise operator Luminous Cruising to file for bankruptcy, although Katz says she expects the largest companies to weather the coronavirus fallout—for now.

“If it’s single-year event, it’ll wash through,” says Katz, who points out that the big cruise companies have previously weathered the 2008 financial recession, other health scares, and disastrous individual ship crises. “But if it were a multi-year event … then it’s a discussion we need to have.”

—Is this your first stock market crash? Some advice for young investors
—Here are two of the biggest losers from the Saudi Arabia oil price war
—Why investors suddenly turned on pot stocks
—Here are some of the most extreme ways companies are combating coronavirus
—Why it’s so hard to find the next Warby Parker