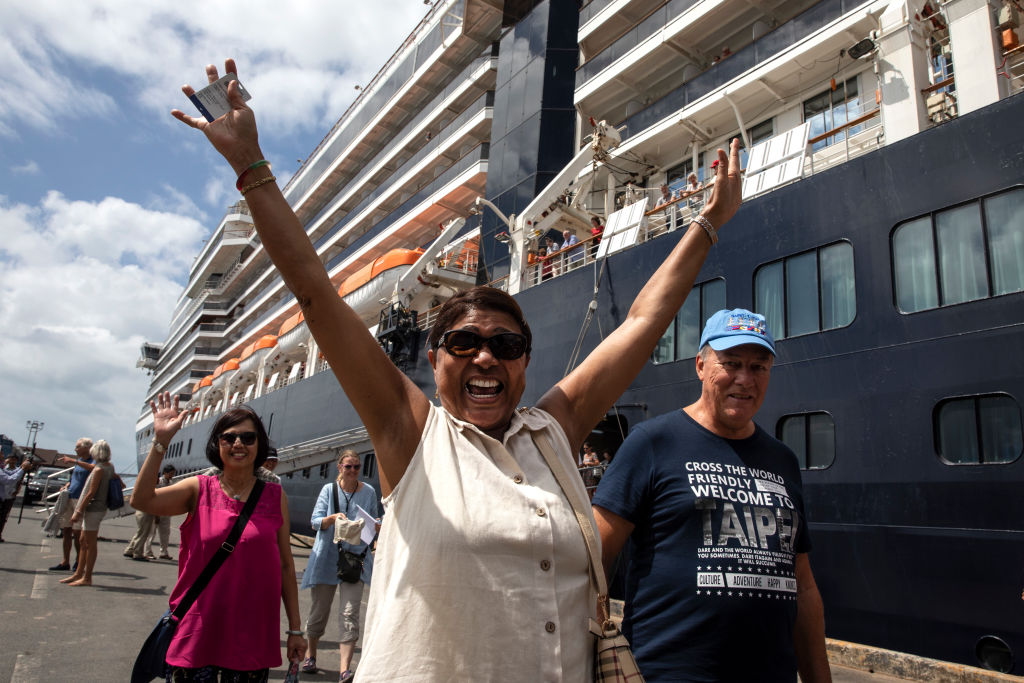 SIHANOUKVILLE - FEBRUARY 14 : Excited passengers disembark from the MS Westerdam cruise ship after being stranded for two weeks, now docked on February 14, 2020 in Sihanoukville, Cambodia. The ship is completely free from the Coronavirus (COVID-19.) but was turned away from five other Asian ports, it departed Hong Kong February 1st with 1,455 passengers and 802 crew on board. Another cruise ship is in quarantine in Japan with more than 200 infections. The Coronavirus cases rise to more than 64,000 people, total number of deaths is approximately 1,383. (Photo by Paula Bronstein/Getty Images)
Paula Bronstein/Getty Images

More than 3,000 travelers on two coronavirus-stricken Carnival Corp. cruise ships are returning home, fanning out to more than 40 countries and fueling fears of further contagion from the deadly virus.

The U.S. on Monday began evacuating its citizens from the Diamond Princess off Yokohama, Japan, where 70 new cases of the virus were confirmed over the weekend. Canada, Hong Kong and other countries also plan similar evacuations of hundreds. On Saturday, an 83-year-old American woman tested positive in Malaysia, a day after she and more than 2,200 others were cleared to leave the cruise ship Westerdam in Cambodia. The ship arrived there after being turned away by five other ports.

“This woman was on the boat and was infected for a few days — she could have potentially exposed other people on the boat who have now gone home,” said Stanley Deresinski, a Stanford University professor and infectious disease specialist at the university hospital. “There’s a possibility that anyone who is infected and asymptomatic could start a chain of infection wherever they return to.”

The startling number of cases on the Diamond Princess, which accounts for the biggest cluster of coronavirus infections outside of China, and the newly detected case from the Westerdam raise questions about the effectiveness of containing the virus on cruise ships. Those concerns have prompted a growing number of Asian countries to block the luxury liners from their ports, threatening earnings of companies like Carnival and Royal Caribbean Cruises Ltd.

“Cruise ships are very high-risk for transmission of illnesses,” said Jean-Paul Rodrigue, a professor of transport geography at Hofstra University in New York. “People are circulating all over, you’re using the same corridors, touching the same handles and railings. It’s easy to catch something.”

The Westerdam spent two weeks in limbo before Cambodia permitted the ship to berth on Feb. 13. Passengers were allowed to leave the next day without a quarantine, and the American woman then traveled to Kuala Lumpur to seek a flight back to the U.S.

Malaysia has since said it won’t allow any more travelers from the Westerdam to transit through the country, causing the cancellation of three charter flights to shuttle passengers out of Cambodia.

Health experts are raising the alarm about the Westerdam passengers after their release without a quarantine order at a time when the death toll from the disease has topped 1,700 globally. Most countries planning evacuations of those on the Diamond Princess in Japan have also announced plans for quarantines upon return.

Westerdam passengers should at minimum be monitored by local health authorities and quarantine themselves, Deresinski and other health experts said. Authorities could also consider testing returning travelers from the ship if feasible, the Stanford doctor added.

The incubation guideline for coronavirus is two weeks — nearly the entire time the ship was on the sea after departing Hong Kong Feb. 1 and becoming a floating pariah. Because the ship was at sea for the required 14-day quarantine, passengers are free to travel after they leave the ship, a U.S. State Department spokesperson said.

Holland America Line — owned by Miami-based cruising giant Carnival — has maintained there was no known case of the disease during the voyage. Knowing when the American woman was infected and by whom is key to determine the risk that other passengers may come down with the virus.

“I don’t know enough about this patient to know if it is possible they were infected prior to boarding, and had a long incubation period,” said Ben Cowling, a professor of epidemiology at Hong Kong University. “Perhaps it is more likely that they were infected on board, which suggests that there was at least one other case on board i.e. the person who infected them.”

The U.S. doesn’t have “sufficient evidence” to determine when she may have been exposed or where, said the State Department spokesperson.

The infected woman was cleared to travel from Cambodia after filling out a health questionnaire and undergoing temperature checks. After she and 144 other Westerdam passengers arrived in Malaysia to transit to other flights, the woman had a fever, was coughing and had difficulty breathing. Two tests confirmed the diagnosis, according to the health ministry. Her 85-year-old husband tested negative as did six other passengers who were quarantined.

Cruise ships have struggled in recent years to battle isolated outbreaks of other maladies like the norovirus, a gastrointestinal illness that’s highly contagious. Still, the quarantine of entire ships due to coronavirus is unprecedented and threatens to upend the cruise industry in Asia and beyond. Vietnam became the latest country to say it wouldn’t allow a cruise ship to dock — forcing the AIDAvita carrying more than 1,100 European passengers to cancel its plans to visit the country.

A strict quarantine on the Diamond Princess, operated by Princess Cruises also owned by Carnival, hasn’t abated infections, which have surged on the ship, while remaining contained in Japan. The 355 cases aboard compare with 59 for all of Japan, a country with a population of more than 125 million.

U.S. passengers leaving the ship will be subject to an additional 14-day quarantine. Those displaying symptoms will remain in Japan for quarantine, while anyone not boarding the flights will have to wait until March 4 at the earliest to return.

More than 600 Americans on the Westerdam are making their way home, the biggest group by nationality. About 233 guests and 747 crew remain on the ship in Sihanoukville, Cambodia, out of 2,257 who were on the voyage, according to a Holland America Line statement.

V. Padmanabha Rao, 81, and his 20-year-old grandson are still waiting for details on when they can leave the ship. The captain announced Sunday afternoon that remaining passengers will likely face a delay as Cambodian authorities plan additional health screenings that may include throat swabs, Rao said.

He and the other remaining passengers have been discussing the evacuations from the Diamond Princess, and hope their governments will do the same for those still in Cambodia.

“You can’t believe how crazy it’s been,” said Rao, who lives in Fredericksburg, Virginia. “The uncertainty is the worse part of everything.”

The retired thoracic surgeon said he and his grandson plan to quarantine themselves voluntarily for 14 days after getting home.

“I don’t want to endanger my neighbors, family or friends,” he said. “Maybe everyone on this boat should go on to a quarantine. That’s the only safe way to prevent any further spread back home.”