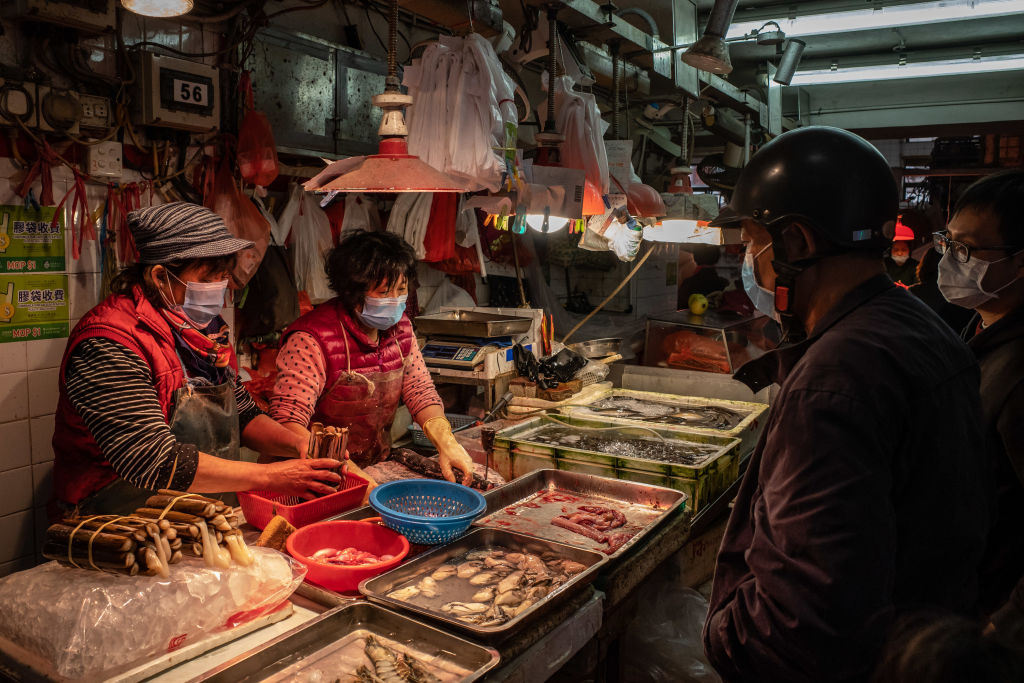 MACAU, CHINA - JANUARY 28: Residents wearing face masks purchase seafood at a wet market on January 28, 2020 in Macau, China. The number of cases of a deadly new coronavirus rose to over 4000 in mainland China Tuesday as health officials locked down the city of Wuhan last week in an effort to contain the spread of the pneumonia-like disease which medicals experts have confirmed can be passed from human to human. In an unprecedented move, Chinese authorities put travel restrictions on the city which is the epicentre of the virus and neighbouring municipalities affecting tens of millions of people. At least six people have reportedly contracted the virus in Macau. The number of those who have died from the virus in China climbed to over 100 on Tuesday and cases have been reported in other countries including the United States, Canada, Australia, France, Thailand, Japan, Taiwan and South Korea. (Photo by Anthony Kwan/Getty Images)
Anthony Kwan—Getty Images

China has become an epicenter for disease outbreaks, and the problem lies in its food supply.

There have now been over 28,000 confirmed cases of coronavirus in at least 25 countries, with 563 deaths, including ones in Hong Kong and the Philippines. And all indications point to the virus breaking out in a seafood wet market in the Chinese city of Wuhan.

In 2019, China ranked 51st out of 195 countries on the Global Health Security Index for its ability to prevent and respond to disease outbreaks. While this may signal that the country is more apt to deal with outbreaks than much of the rest of the world, China—as the world’s most populous country and an economic superpower—still has significant strides to make in improving public health and safety.

While the coronavirus is the first novel disease outbreak in China in years to infect humans, in the recent past China has suffered disease outbreaks among its livestock. African Swine Fever, for instance, has devastated China’s pig population since 2018, reducing the number of pigs there by 40% and straining the country’s food supply. And just last week, China reportedly culled 18,000 chickens after finding cases of bird flu.

To be clear, the diseases share little in common genetically, according to Linda Saif, a professor in food animal health at Ohio State University, and coronavirus is the only one of these currently known to spread between and infect humans. Yet the outbreaks all point to a similar culprit: persisting problems in China’s food supply.

Amid the coronavirus crisis, China’s wet markets—featuring produce and meats and sometimes live animals—have received significant attention. Yet a seismic shift such as closing down these markets altogether might not be the answer to better controlling disease in the long term, experts say. Rather, what’s required is more regulatory enforcement on a local level, a tricky prospect for a country where power is increasingly centralized.

As China has transformed into a major world power in the last several decades, feeding the country of 1.4 billion has proved a challenge of outsize proportions.

The country long depended on a network of small farmers for its food; land was redistributed to individual households under Chairman Mao Zedong in the 1970s. More recently, particularly in the last few years, China has aimed to industrialize its food system.

Protestors in Hong Kong gather in February to oppose government plans to convert a local heritage site into a quarantine camp amid the outbreak of the novel coronavirus which began in the central Chinese city of Wuhan.
PHILIP FONG—AFP/Getty Images

“The government in China has been making long-term pushes toward agriculture modernization including large scale farms for many years now,” said Darin Friedrichs, senior Asia commodity analyst at INTL FCStone in Shanghai.

Beijing promoted buying food from supermarkets after the spread of Severe Acute Respiratory Syndrome (SARS), which emerged from an animal market in Guangzhou. After an avian influenza outbreak in 2013, the government tried unsuccessfully to ban wet markets altogether, but was forced to reopen many of them when more dangerous black markets popped up in their place.

But scandals involving deadly infant milk powder, fake seaweed, and fraudulent shrimp have undermined the modernization efforts by compromising consumers’ confidence in mass food production. Chinese consumers continue to go to wet markets in cities across China to access fresher, cheaper meat and produce, according to Si Zhenzhong, an expert in food security and safety in China at the University of Waterloo in Ontario, Canada.

Wet markets remain a viable resource for small farmers who aren’t able to sell to large supermarket chains, said Friedrichs, “and plenty of consumers have a preference towards buying at their local wet market.” In fact, the markets account for up to half of all of China’s food goods. The day-to-day commodities that are the markets’ biggest sellers don’t necessarily pose a “disease risk.” The biggest danger comes from the live animals sometimes sold in the markets, Friedrichs said. Diseases can spread between animals during transport, and then to humans at the markets themselves, which makes the whole trade a breeding ground for disease.

A Chinese man wears a protective mask as he walks in an empty commercial street in Beijing, China, in February. Much of the country has been on lockdown as a virus, believed to have started in a Wuhan wet market, sweeps the country.
Kevin Frayer—Getty Images

“The pattern (of disease outbreaks) will keep repeating itself until we ban, not only in China, but in other countries, the sale of wildlife, specifically for food and in food markets,” said Walzer.

Wild animals can carry diseases that do not ordinarily come into contact with humans, according to Walzer. Another expert, Jeroen Dewulf, a veterinarian at Ghent University in Belgium, told the Guardian that “live animals are the largest source of infection (in spreading diseases),” because it’s the most efficient way to introduce novel diseases to humans.

It seems that China might be taking these calls more seriously. On Monday, President Xi Jinping released a statement vowing to “resolutely ban and severely crack down on illegal wildlife markets and trade.”

But simply banning wildlife sales and policing wet markets might pose new problems, such as black markets for such goods. According to some experts, China needs to better enforce its existing regulations, like more regular health and safety inspections from China’s Center for Disease Control and Prevention, to more effectively control disease spread.

“What ‘wet markets’ in China require is more scientific and evidence-based regulation, rather than being abolished and driven underground,” anthropologists Christos Lynteris and Lyle Fearnley, who have studied disease outbreaks in China, argued in a recent piece for The Conversation.

But enforcing regulations on a local level is complicated by the growing influence of China’s central government. Local leaders are incentivized to appease Beijing, rather than raise red flags. Local officials in Wuhan have come under fire for not communicating the disease’s severity early enough, and senior party officials admitted to “shortcomings and deficiencies” in the city’s early response to the outbreak.

China’s entire state apparatus now appears fully mobilized behind containing the disease: an area with a population equal to California and New York State combined is under complete lockdown, new hospitals are being built in a matter of days, and much of the country is paralyzed by travel restrictions.

For those following African Swine Fever in the last few years, this might be a familiar story. The central government announced sweeping measures to cull hundreds of millions of pigs (and even worked with tech firms to roll out pig facial recognition technology to track sick animals) after the disease broke out in August 2018, yet today the problem remains as acute as ever. It is a worldwide epidemic that’s wiped out up to a quarter of the world’s pigs.

Edgar Wayne Johnson of Enable Ag-Tech Consulting in Beijing argues that the government “sat on [its] hands in the early stages” of the swine fever, and is still struggling to enforce local regulations.

The central government ends up exerting every ounce of its power to stop disease outbreaks like the coronavirus, yet the best solutions might be found at the bottom of China’s food chain.