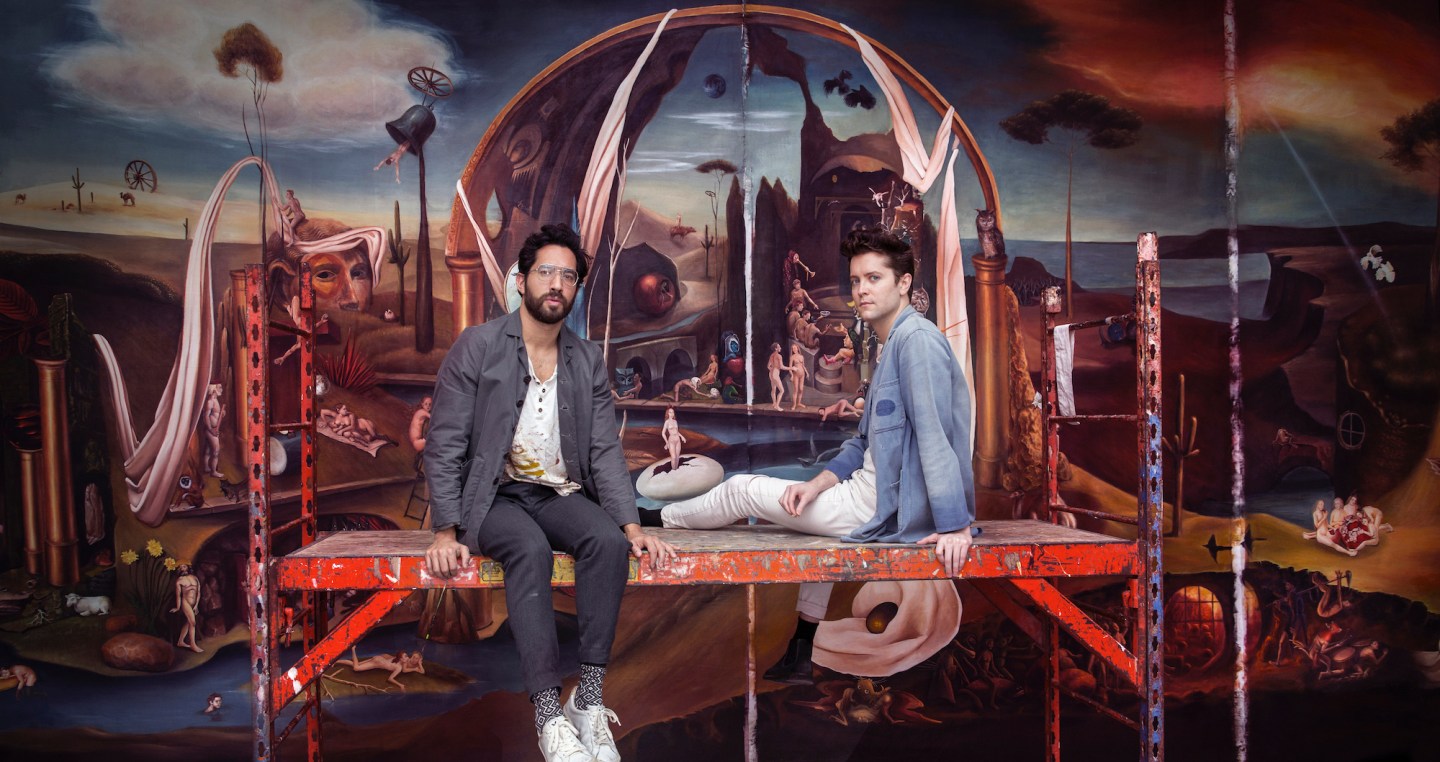 When walking into Jean-Georges Vongerichten’s The Fulton, the famous chef’s downtown New York City restaurant, expect to feel as if you’ve taken a dip under the sea. That is, at its simplest, the intent of En Viu, the art collective behind large-scale murals found at this and other high-end restaurants and hotels around the world: to produce art that transports the viewer deeper into a space.

Established in 2016 by now-married couple Chandler Noah and Diego Castaño, En Viu counts the Times Square Edition, the Rosewood Guangzhou, and the upcoming The Londoner as clients—a roster made possible by Noah’s previous five-year stint as an architect at Yabu Pushelberg, an interior design company. “They introduced us to, I would say, 60% to 70% of the clients that we have now,” says Noah.

Those customers reach out to the duo to create large-scale paintings that will adorn the walls of various spaces. “They generally have a mood or a vibe or a certain theme that they are trying to stick within, so we usually start there,” Noah says. After coming up with a narrative that will inspire the project, the team—which, in addition to Noah and Castaño, includes seven expert assistant painters—work on sketches, eventually moving to physical samples and full-scale mock-ups.

“It is symbiosis and dance, not only between us, but with our clients and our artists,” says Castaño, who has a background in fine art, about the work. “From conception to the installation of the pieces in their final location, our process is artistically and technically challenging.”

Views of the Brooklyn Bridge and the East River at Jean Georges Vongerichten’s The Fulton in New York City.
Courtesy of En Viu Studio

Noah and Castaño met in New York City in 2014 and started collaborating on various projects shortly thereafter. Noticing a need within the commercial space for experts that could both execute and help procure art, the duo established the company to create a “powerful art package within a hotel.”

As for the name, which is pronounced “in view,” the pair sort of stumbled upon it. “It was just a word that I saw at a flamenco show with Diego, and it was projected onto a wall in a fine serif font,” Noah recalls. “I said, ‘I don’t know what that means, but it looks beautiful.’” Turns out that, in Catalan, “en viu” means “in motion,” a concept that ends up echoing the business’s workflow, one that encompasses a variety of mediums and disciplines.

Said flow will be shaken up come April, when the duo’s latest project, an art gallery in Antwerp, Belgium, called Newchild, opens to the public. The space, which Noah and Castaño own with friend and art expert Sarah Vanwelden, will be used to showcase mostly contemporary art in different forms by both established and emerging artists.

A juxtaposition of the old and the new is what seems to define all of the pair’s work. Take their project for the Rosewood Guangzhou, for example. Now the tallest hotel in the world, the owners of the building tasked En Viu to develop a piece that involved “the idea of the past and future.” Inspired by the 2000 film In the Mood for Love, the mural they settled on was painted in a European style reminiscent of days of yore but also boasts futuristic details and nods—think of an astronaut riding a golden fish or monkeys sitting on a bridge talking to one another, all occupying a landscape that clearly depicts an older, more romantic and traditional world.

For The Londoner, slated to open in Leicester Square this June, the duo opted to honor British explorer James Cook throughout the two murals they were hired to produce. “We sort of reimagine what would have happened if [Cook] went to Hampstead Heath, just north of London, and kind of sat down and dreamt of the journey he has had,” explains Noah. “You see animals and objects that he collected from all over the world sort of superimposed on this British landscape.”

Neither one of those projects, though, took as long as their mural for the Times Square Edition Hotel, which required 10 people to paint five days a week for two full years.

What is obviously most striking about En Viu’s work is its sheer immensity, which turns out to be its strongest asset. When asked about the shifting cultural landscape in which they operate, a world dominated by the virtual, in which people tend to look down at their phones instead of appreciating all that surrounds them, Noah is relatively positive.

“Usually, our pieces occupy or envelop a space,” he says. “So that when you walk in, most of the time, you’re somewhat enveloped, you’re sort of transported in a way. That’s probably the most fun that we have: creating something that’s completely immersive and transporting.”

—Inside New York City’s Chinese restaurant crisis
—Couples are including cannabis at their weddings. How you can, too
—These tailors show that custom suiting is no longer just for men
—The best travel destinations for every season of 2020
—WATCH: What the future of travel will look like