Can Amazon convince a federal court to depose Trump over a $10 billion Pentagon contract? 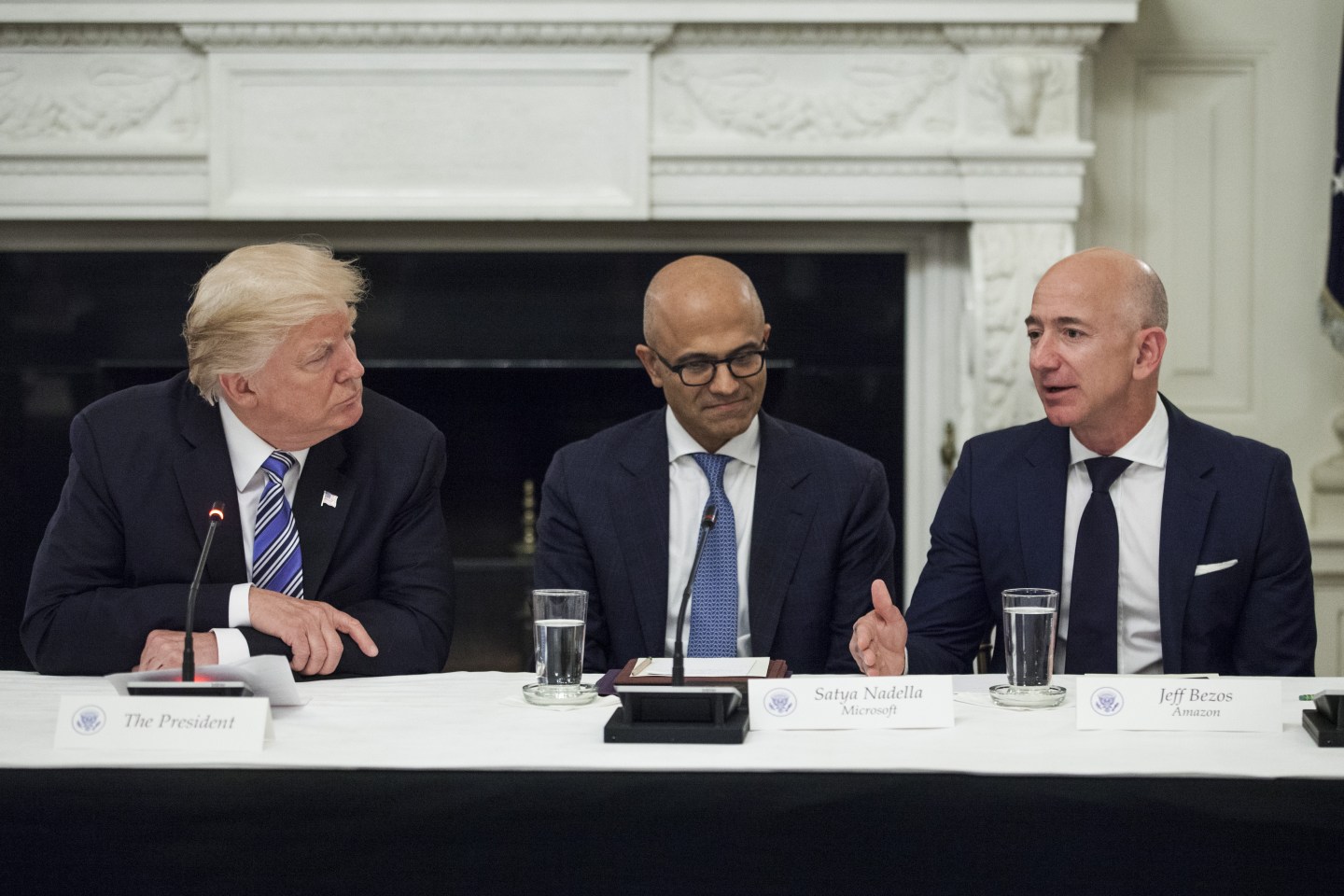 A competition between Microsoft and Amazon to supply $10 billion worth of cloud computing services to the Department of Defense was decided—controversially—in October.

Despite Amazon Web Services (AWS) dominating nearly half of the public cloud market, the DoD opted to give Microsoft—whose “intelligent cloud segment” Azure is a smaller piece of the pie—the JEDI (Joint Enterprise Defense Infrastructure) project. Citing the President’s misgivings with Amazon founder Jeff Bezos, the tech giant responded with a lawsuit against the Pentagon claiming that the decision process was tainted by bias.

Now, Amazon is taking things a step further by petitioning a federal court to make Trump, Defense Secretary Mark Esper, former Secretary of Defense James Mattis, and five other parties, including chairpersons of the Source Selection Advisory Council and Source Selection Evaluation Board, all explain themselves in depositions.

“President Trump has repeatedly demonstrated his willingness to use his position as President and Commander in Chief to interfere with government functions—including federal procurements—to advance his personal agenda,” an AWS spokesperson tells Fortune. “The question is whether the President of the United States should be allowed to use the budget of the DoD to pursue his own personal and political ends.”

It’s without question that Trump has harbored animosity toward Bezos. In 2015, he opined on Twitter that the Amazon founder has “the power to [screw] the public.” While in the Oval Office, he’s repeatedly lobbed insults at the Bezos-owned Washington Post, citing Trump-unfriendly coverage.

The knife twist reportedly came in the summer of 2018, when, according to Mattis’s ex-speechwriter, Trump personally told the ex-secretary of defense to “screw Amazon” out of the $10 billion cloud contract.

Besides, Trump is unbound by presidential norms, the AWS representative says. He once revoked a CNN correspondent’s press credential, tried to block a merger between Time Warner and AT&T, and interfered with bids to move the FBI Headquarters away from the Trump International Hotel.

So, it’s beyond doubt that Trump interfered with the JEDI project, right? Not so fast, the Department of Defense says.

“We have kept the identities of every member of the source selection team anonymous throughout this process,” Dana Deasy, CIO at the Department of Defense, who Amazon wishes the court to depose, told the Senate Armed Services Committee in 2019. (“These assurances are in fact no assurance at all,” the AWS spokesperson says. “The President’s directives and biases were broadcast to the entire nation.”)

For the sake of argument, let’s say Trump meddled with the Department of Defense to award the contract to Microsoft. Was this unethical? That depends on who you ask. At odds with the GOP’s idea of free enterprise? Arguably.

Most importantly, is it illegal—and can a federal judge be convinced to depose Trump, Esper, and the others?

In its filing to the Court of Federal Claims, AWS insinuates that the DoD is violating U.S. procurement law.

“[Our] allegations of bad faith and bias are more than ‘sufficiently well-grounded’ [as per legal requirement] to warrant supplementation,” the filing says.

AWS goes further, calling the source selection advisory council “irrational,” and their decision-making process “[not] reasoned.” “Taint manifests itself in various forms,” it says, “but one obvious way is through shoddy analysis calculated to reach a predetermined outcome.”

When asked to elaborate on whether the Pentagon broke U.S. procurement law, Amazon did not immediately respond for comment. Nor did they cite a claim in their statement that “the DoD set aside concrete evidence showing that AWS was the technically superior provider.” (Most of the filing’s technical specifics are blacked out as confidential.)

“DoD strongly opposes the Amazon Web Services request to depose senior DoD leaders,” Lt. Col Robert Carver, a spokesman for the Department of Defense, told Fortune in a statement. The request is unnecessary, burdensome and merely seeks to delay getting this important technology into the hands of our warfighters.”

“There were no external influences on the source selection decision,” he continued. “We will not comment on the specific claims in the litigation.”

Microsoft, for its part, said in court filings that AWS “only provided the speculation of bias, with nothing approaching the ‘hard facts’ necessary.”

Without more specific invocation of a U.S. law that the Department of Defense is breaking by choosing one private company or another, AWS will be forced to blow the horn of “bias,” “bad faith,” and little else to a federal judge.

Granted, Microsoft Azure, with its comparative lack of market share, is the more unconventional choice for the role. Its come-from-behind JEDI award is bound to change the landscape of cloud computing and send Amazon packing.

But for Bezos’ Big Four company to successfully overturn the DoD’s decision, it’s safe to say Amazon needs more than speculation and accusation on its side.