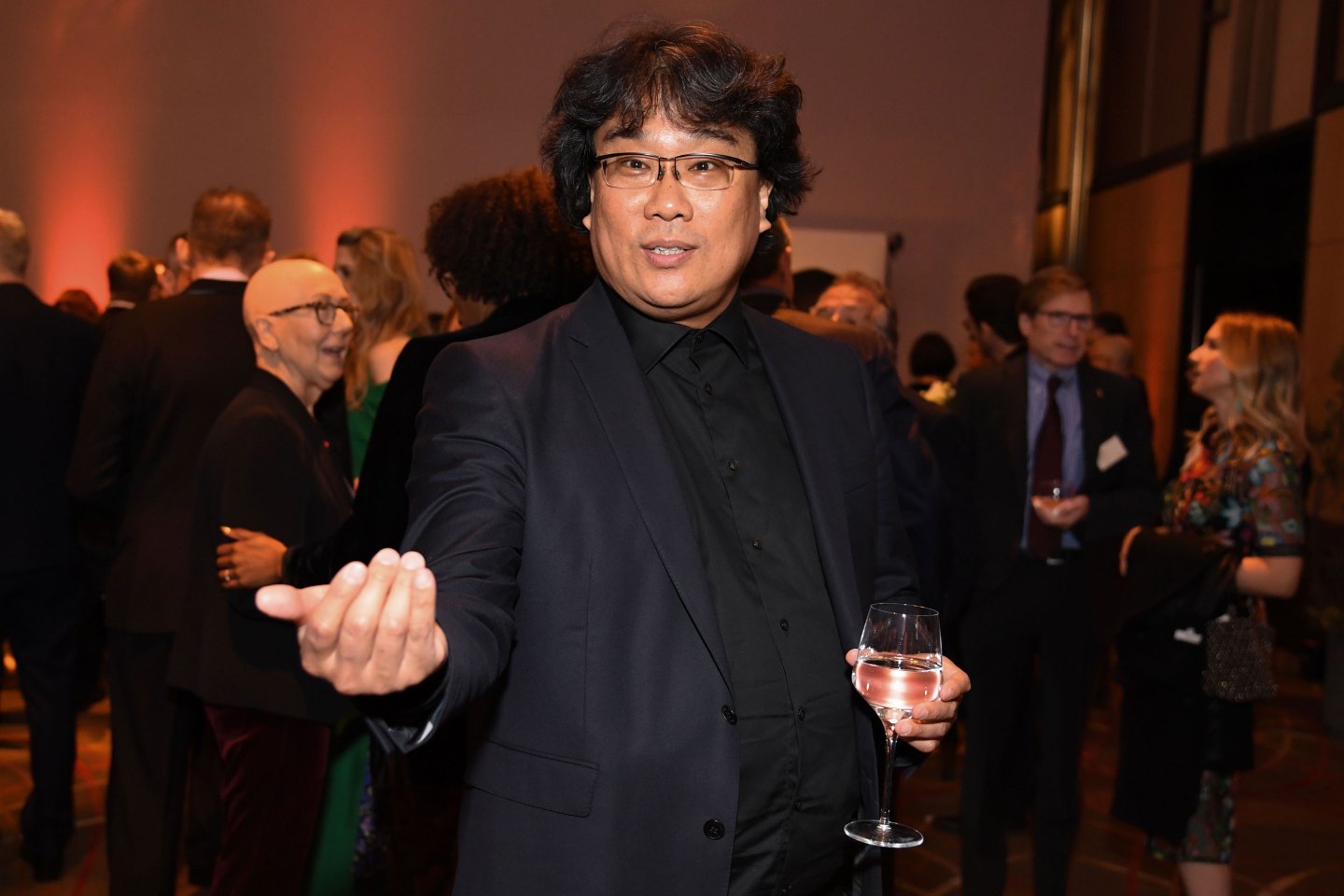 If there’s one moment that encapsulates exactly how unique this awards season has felt, it was on Monday, Jan. 27, inside Hollywood’s Ray Dolby Ballroom during the Academy’s annual pre-Oscars luncheon, which saw more than 160 nominees gather for their coveted annual group photo.

As guests dined on yet another of this season’s plant-based creations (maitake mushroom and black rice, courtesy of maestro Wolfgang Puck), emcee Illeana Douglas painstakingly announced each nominee present, with the names intermingling like some sort of fantasy dinner-party parlor game.

But not one of those icons received a more shrieking reception than Parasite director and cowriter Bong Joon Ho—delivered by a fan base affectionately anointed “the Bong Hive”—as the auteur filmmaker settled into his place in the nominees photo.

Bong Joon Ho (seated, on the set of “Parasite”) is now developing a limited series for HBO based on his Oscar-nominated feature with executive producer Adam McKay.
Courtesy of Neon

And the reaction was for good reason: Parasite, which earned six Oscar nominations, has made history as the first South Korean movie to be nominated for Best Picture and Best International Film. It’s also grossed nearly $164 million worldwide after becoming the highest-grossing Palme d’Or winner in France and North America in 15 years since Michael Moore’s Fahrenheit 9/11 in 2004.

With a slew of coveted wins—including SAG Ensemble, WGA’s Best Original Screenplay, the Golden Globe for Foreign Language film, and two wins at BAFTA, including Original Screenplay and non-English film—Parasite is now a lock for Best International Film at the Independent Spirit Awards and Oscars this weekend.

Could Bong be poised to claim his place in Oscar’s Best Picture history, too? Maybe.

At press time, many pundits agree that Parasite, a satirical thriller about a poor Korean family’s con of a rich couple that culminates in a blood-soaked finale, is now neck and neck for Best Picture with Universal’s 1917, the World War I epic by Sam Mendes—in its own right a formidable contender.

Oscar-winning director Sam Mendes (center, on the set of “1917”) based his Best Picture frontrunner in part on accounts of World War I by his paternal grandfather, Alfred Mendes. Since its Dec. 25 opening, the Universal release has earned more than $252 million worldwide.
Courtesy of Universal Pictures

The British director won Best Motion Picture – Drama at the Globes and has scored coveted Directors Guild and Producers Guild wins, which are often reliable industry-precursors to Oscar’s Best Picture. This past Sunday, he walked away with seven key wins at BAFTA, including Best Film. It was the last major relevant industry event to occur before the end of Oscar voting on Feb. 4.

As Mendes’s film has garnered wide appeal among voters in the past six weeks (the war epic was a somewhat late entrant to the race, in late November, whereas upstart studio Neon acquired Parasite months before its Cannes win in May), the Academy tea leaves are becoming easier to read: Bong is a lock for International Film and favored for Original Screenplay at the Oscars (sorry, Tarantino). Mendes is the likely victor for Best Director, and the battle for Best Picture is now winnowed down to their two uniquely thrilling pieces of work.

This reality has no doubt been a blow for numerous big-swing contenders this season, including Warner Bros.’ 11-time nominee Joker from Todd Phillips, Netflix’s double bill of Baumbach’s Marriage Story and Martin Scorsese’s The Irishman, and Sony’s Once Upon a Time… in Hollywood, for four. Offering some consolation, actors Joaquin Phoenix, Dern, and Pitt are all but Oscar locks for Joker, Marriage, and Hollywood (with Judy’s Zellweger filling out the fourth acting slot).

Interestingly, Marriage is the only film this season to cross over significantly with nominees for Film Independent Spirit Awards, which since 2011 has seen nearly half of its Best Feature winners also take Oscar’s top prize, including: The Artist, 12 Years a Slave, Birdman…, Spotlight, and Moonlight.

Netflix’s “Marriage Story” by writer-director Noah Baumbach is the only Best Picture Oscar contender this year that is also nominated for Film Independent’s Spirit Award for Best Feature.
Wilson Webb—Netflix

But at this year’s Spirits, whose Aubrey Plaza–hosted ceremony airs Saturday (5 p.m. ET on IFC), the Best Feature winner won’t offer any insight into Oscar’s Best Picture race, as the most likely to win is Marriage or A24’s Uncut Gems by the Safdie brothers, who were wholesale snubbed by the Academy alongside their Spirit-nominated lead actor Adam Sandler. (Universal’s 1917 is decidedly not Spirit-eligible, with a rumored budget of $90 million.)

For many, the Spirits’ minimal overlap with Academy front-runners feels particularly resonant this year. Spirits nominees include actors of color (Jennifer Lopez, Kevin Harrison Jr., and Alfre Woodard, for three) and two female directors (Honey Boy’s Alma Har’el and Hustlers’ Lorene Scafaria), whereas the Oscars have only one acting nominee of color and no female Best Director nominees. It also makes predicting Best Picture at the Oscars, whose host-less telecast airs Sunday at 8 p.m. ET on ABC, trickier than usual.

What do we know nearly for sure is the final face-off of this strange, truncated season is now Bong—an international, outlier talent telling a story in Korean about class divide and excess—versus Mendes, a British theater vet chronicling a personal story from a “forgotten” world war.

Whatever is revealed on Sunday, one thing is for certain: The Bong Hive has already spoken, and Hollywood will likely never be the same.

—How Randy Newman’s family built a film-scoring dynasty over the course of a century
—How much is an Oscar worth?
—Bombshell‘s Charlize Theron and John Lithgow reflect on the film’s indelible impact
—American Factory directors on capturing what “globalization looks like on a human scale”
—Taika Waititi on Kiwi humor, directing as Hitler, and why kids should see Jojo Rabbit
Follow Fortune on Flipboard to stay up-to-date on the latest news and analysis.