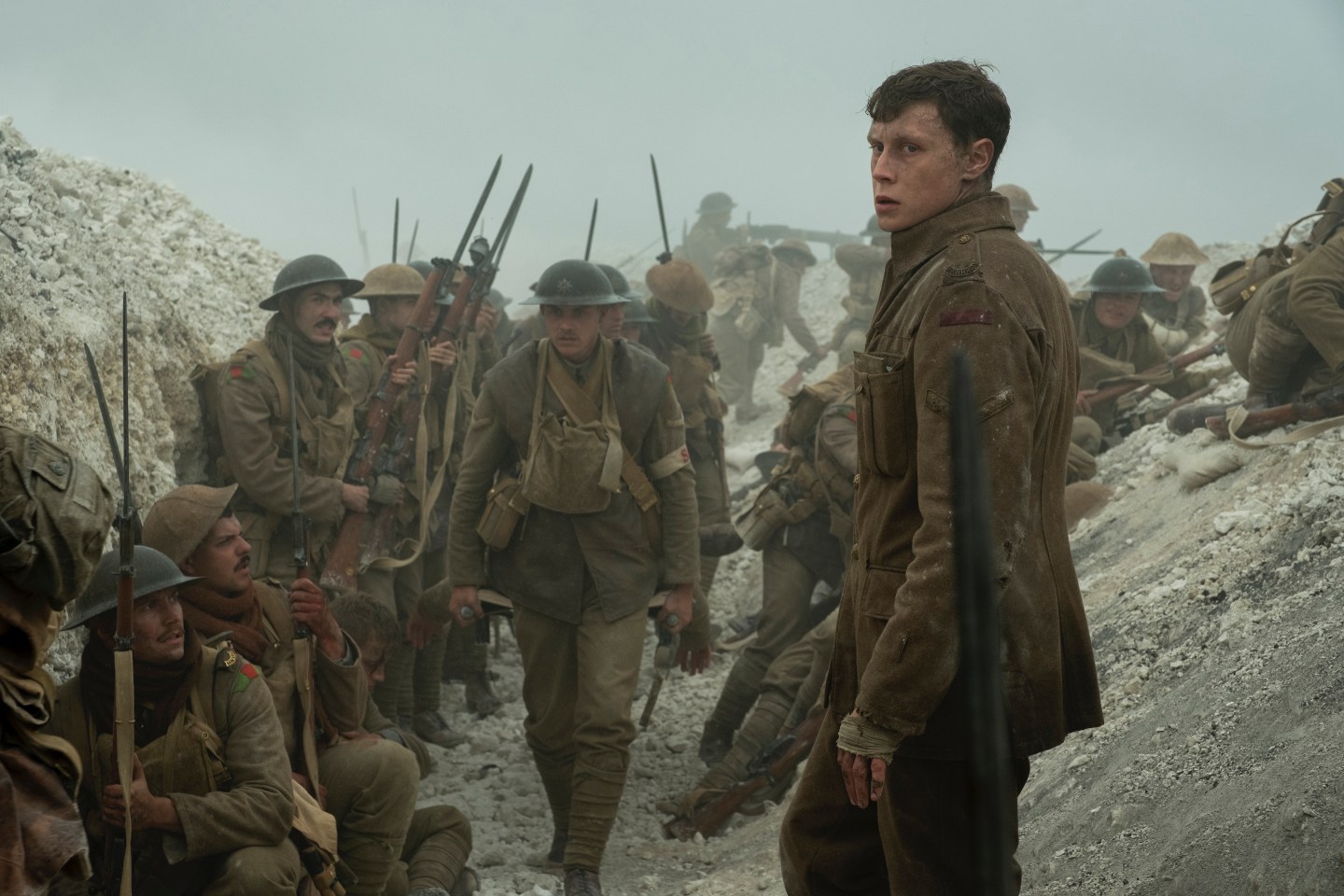 If you enjoy reading novels or watching movies set during World War II, you’ve had a steady bounty of prize-winning fiction and Hollywood blockbusters to choose from.

In just the past decade, there have been books about a blind girl who takes refuge in a seaside French village and prisoners of war forced to labor in the jungles of Burma, along with movies about the blood-soaked siege of Stalingrad, the heroic rescue of Allied troops stranded on the beaches of Dunkirk, Allied troops recovering priceless stolen art, English mathematicians breaking Nazi codes, a king working through his stutter, and a prime minister guiding his nation through its darkest hour, among plenty of others.

But if World War I is your thing, pickings have been slimmer—until recently. The 100th anniversary of the conflict, which lasted from 1914 to 1918, has coincided with a handful of pop culture offerings about the Great War over the past few years. There’s Sam Mendes’s new Golden Globe-winning and Oscar-nominated drama 1917, Peter Jackson’s 2018 documentary They Shall Not Grow Old, Daniel Mason’s 2018 novel The Winter Soldier, and a just-released concept album by the English band Field Music, Making a New World. The war was also a storyline in season two of Downton Abbey in 2011, and a plot point in the 2017 Wonder Woman movie.

The centenary has brought attention to a war that occupies comparatively little space in the American popular consciousness, though its aftereffects continue to resonate. There were technological advances such as portable X-ray machines, and social changes that included women in the U.S. winning the right to vote. How European powers divvied up the Middle East after the war, establishing new countries and drawing borders without regard for political or religious history, helped foment the still precarious geopolitics of the region. Yet the Great War is largely an unfamiliar one.

British soldiers lined up in a narrow trench during World War I.
Hulton Archive/Getty Images

“It’s the neglected war,” says Susan Craig, an independent historian in New York who was part of a loose consortium of peers that tweeted and blogged daily updates about the war 100 years after the fact. For Americans, “It’s not as popular as the Civil War, certainly, and it’s not as popular as World War II.”

There are a few reasons why. The First World War was a distant conflict for most Americans: about 4 million U.S. troops served during the war, compared to 16 million in World War II. With a decisive victory over Nazi Germany and the Axis powers, World War II combatants came home as heroes—a status that has endured. “Everything is so fixated on that Greatest Generation narrative,” Craig says. “That narrative swamped everything else for a while.”

The rationale for the Great War was also less clear-cut than for World War II, which offered starker contrasts, and higher stakes. “The Second World War was about countries uniting to fight the tyranny of the Nazis; it seemed like the only option to save humanity,” Krysty Wilson-Cairns, who cowrote the screenplay for 1917, recently told Variety. “But with the First World War, the motivations are obscure. It was partly for profiteering, partly because empires were starting to lose their stakes abroad.”

Some of the best-known cultural depictions of the Great War came from people who experienced it: the 1929 novels All Quiet on the Western Front by Erich Maria Remarque and A Farewell to Arms by Ernest Hemingway, for example. Later, the satirical 1963 stage musical (and a subsequent film adaptation) Oh, What a Lovely War, and Rowan Atkinson’s 1980s British sitcom Blackadder Goes Forth, helped cement a popular image of World War I as a bungled conflict that ran soldiers through a meat-grinder with no strategic purpose.

“All that starts in the 1960s when there was a backlash from the left, really,” says Alan Wakefield, head of First World War and early 20th century at the Imperial War Museum in London. “People who had an anti-establishment line to toe looked back into First World War literature and picked up on the war poets, and put their own spin on this idea of lions led by donkeys, something that really fed into a narrative against the class system in the U.K.”

That was essentially the image Field Music’s David Brewis had in mind when the Imperial War Museum asked if the group would create a performance piece as part of a program exploring the aftermath of a war that he didn’t know well. “I studied it in high school in the way you see things at high school: you pay a bit of attention, you find it interesting, but you don’t think too deeply about it,” says Brewis, who visited a branch of the museum with his brother and bandmate, Peter Brewis.

From left to right: Field Music’s Peter Brewis, Andrew Lowther, David Brewis, Kevin Dosdale, and Liz Corney. After doing a commissioned project for the Imperial War Museum in London, the group has released the WWI-inspired “Making A New World.”

After that, Field Music took on the commission, and the project expanded into Making A New World as the band researched the topic and wrote songs. The album is a 19-track collection that traces post-war developments from the moment the guns fell silent on Nov. 11, 1918. There are songs about returning home, about the pioneering doctor whose work on skin grafts to treat disfigured soldiers later had applications for gender-reassignment surgery, and about how bandages intended for field dressings were rebranded as sanitary pads for women. One track, “Money Is a Memory,” notes that Germany only finished paying reparations for the war in 2010.

“We were surprised to the extent that the war shaped so much of the 20th century,” Brewis says, citing the first military use of tanks, aircraft, and chemical weapons, and the artistic and social upheavals that followed the war. “In some ways, things have changed a lot. But in some ways, we are still very much living in the world shaped by that conflict in that time.”

Some of those technological innovations figure in The Winter Soldier, Daniel Mason’s novel about a Viennese medical student who enlists and is assigned to a remote field hospital in the Carpathian mountains. Mason had intended to set the novel in 1920s Vienna until he began doing research for his protagonist’s backstory. “I realized as I wrote that there were few places that put medical training in such a dramatic context as World War I, particularly as the armies were so unprepared for the casualties that would come,” says Mason, a physician on the faculty at Stanford University, who spent 14 years working on the book amid other projects.

His unfamiliarity with World War I, especially beyond the popular image of trench warfare on the Western Front, was liberating as a storyteller. “It was as if I had stumbled across this world (particularly that in the East) that was new to me,” Mason writes in an email. “So my reading had a constant feeling of discovery, which was quite compelling—the medicine, the different cultures, the geographies, all were new.” Like Brewis, Mason was struck by parallels between World War I and the present, particularly in how the world changed in the 14 years he spent working on the novel. At the risk of oversimplifying, he says, “Now the lessons of the war seem even more pressing: it is an example of how diverse, multiethnic, culturally rich civilizations living in relative peace and prosperity can suddenly and precipitously fragment into nationalism and bloodshed.”

—Disney is ready to roll out new Star Wars sagas as one story ends
—With Joker laughing it up at the Oscar, Sony teases Jared Leto’s Morbius
—Indie movies and diverse performers mostly absent from 2020 Oscar noms
—Picard promises less tech, more humanity with “hope the dominant emotion,” according to Patrick Stewart
—When it comes to streaming media, Quibi made the most of CES
Follow Fortune on Flipboard to stay up-to-date on the latest news and analysis.