When It Comes to Streaming Media, Quibi Made the Most of CES 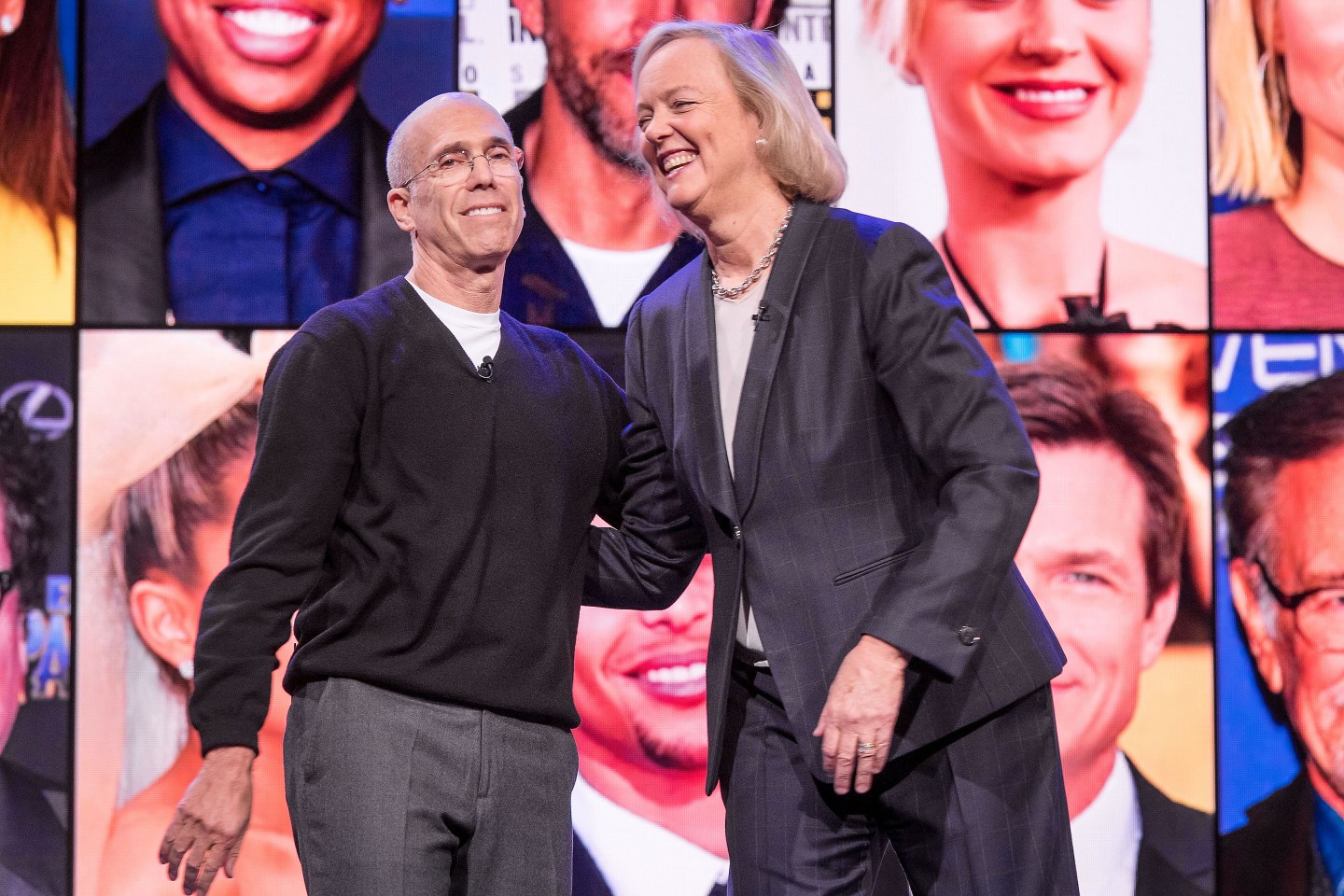 Jeffrey Katzenberg, chairman and founder of Quibi SA, and Meg Whitman, chief executive officer of Quibi SA, stand together on the stage at the conclusion of a keynote at CES 2020 in Las Vegas, Nevada, U.S., on Wednesday, Jan. 8, 2020. Every year during the second week of January nearly 200,000 people gather in Las Vegas for the tech industry's most-maligned, yet well-attended event: the consumer electronics show. Photographer: David Paul Morris/Bloomberg
David Paul Morris/Bloomberg

Streaming media might have been a huge topic of conversation among showgoers and television manufacturers at CES this year, but many of the executives running those streaming companies chose to play things close to the vest while they were in Las Vegas.

NBCUniversal’s keynote, which featured Linda Yaccarino, chairman of advertising and partnerships, was remarkably light on new information about the Peacock streaming service. (That’s expected to be unveiled on Jan. 16 at an NBC event.) WarnerMedia was a bit more forthcoming about HBO Max, but talked more in broad strokes. Quibi, however, used CES as a big coming out party, with Jeffrey Katzenberg and Meg Whitman making their best argument as to why people should subscribe to the short format video service.

The question, of course, is will that argument be effective?

“What we’re trying to show is we might be the next big evolution in entertainment, with a tech platform that is designed to show content, mobile only, in a really premium way,” Whitman told Fortune before the service’s keynote.

Quibi, Peacock, and HBO Max are joining an increasingly crowded market, taking on not only established players like Netflix, Hulu, and Amazon Prime, but newer players including Disney+, AppleTV+, and CBS All Access.

Ultimately, content will be the key to standing out from the pack (though price may be nearly as important to some consumers). Quibi’s hoping its catalog of original videos from established names (including Steven Spielberg and Idris Elba) and the daily flow of new content will lure viewers.

“Every day we will publish more than 30 episodes or quibis—which is about three hours of content,” Katzenberg told Fortune. “To give another way to measure that, a broadcast network in prime time schedules about two hours—135 minutes. We’ll publish about 180 minutes.”

New episodes of feature content (comparable to films or TV shows) will be issued daily after the first part airs. And Quibi hopes that will get (and keep) people talking about what might happen next.

HBO, meanwhile, said part of its focus for HBO Max, will be on the user interface, eliminating the “endless scroll” on many current sites and targeting mobile users with an interface chief technology officer Jeremy Legg jokingly called “swipey” in a keynote.

Quibi’s focused on interface as well at its keynote, showcasing its “Turnstyle” technology, which allows viewers to instantly switch from landscape to portrait mode, optimizing the onscreen images for however they choose to watch the programming.

Quibi has been vocal about its heavy spending on creating original content (and expects to close another round of financing soon). HBO Max, though, plans to draw from the enormous collection of existing content creators in the WarnerMedia family.

“We have tremendous creative talent at HBO and HBO Max, Warner Bros., the Turner networks,” said Andy Forssell, general manager of Direct-to-Consumer, at the HBO Max keynote. “Their job is to find great creative, find the right audience and the right place for it. There are cases where you’ll see things where we’ll decide the right place for it is SVOD and there may be life for it on linear networks or elsewhere. You’ll see the reverse as well. You’re going to see it both directions. I think there is as much synergy there, more so than conflict.”

Meanwhile, Peacock plans to take a different approach, focusing on quality, not quantity, said Yaccarino at her keynote.

“We don’t want to serve them junk,” she said. “We are aware of who we want to serve with premium content. We have to meet them on their terms—anywhere, any time, and on any screen. … The future is all about personalization… to reach beyond the screen and form a personal relationship with the right ad and content—that’s when the magic happens”

HBO Max and Peacock, along with existing streaming services, have a head start in the streaming field, since their parent firms are familiar to customers. Katzenberg is a Hollywood icon, but Quibi is an unknown, which has raised some doubts about how it will be greeted by a wide audience.

Katzenberg acknowledges this, but said he and Whitman are chasing a different audience than other streaming services.

“Everything they’re being offered today is centered around the TV. This is about your in-between time,” he told Fortune. “It’s quick bites, on the go and in between. It’s a very, very different viewing habit that we know our anticipated customers already have.… There is an unbelievable amount of content being consumed today on phones on the go. It’s just not of this quality.”

—Hulu will exclusively stream new FX series—and other updates from peak TV land
—How Neil Young’s eccentric online home was born
—Could Disney have more faith in X-Men spinoff The New Mutants than Fox did?
—What the 2020 Golden Globes tells us about this year’s Oscars
—Inside 1917: designing a World War I battlefield
Follow Fortune on Flipboard to stay up-to-date on the latest news and analysis.