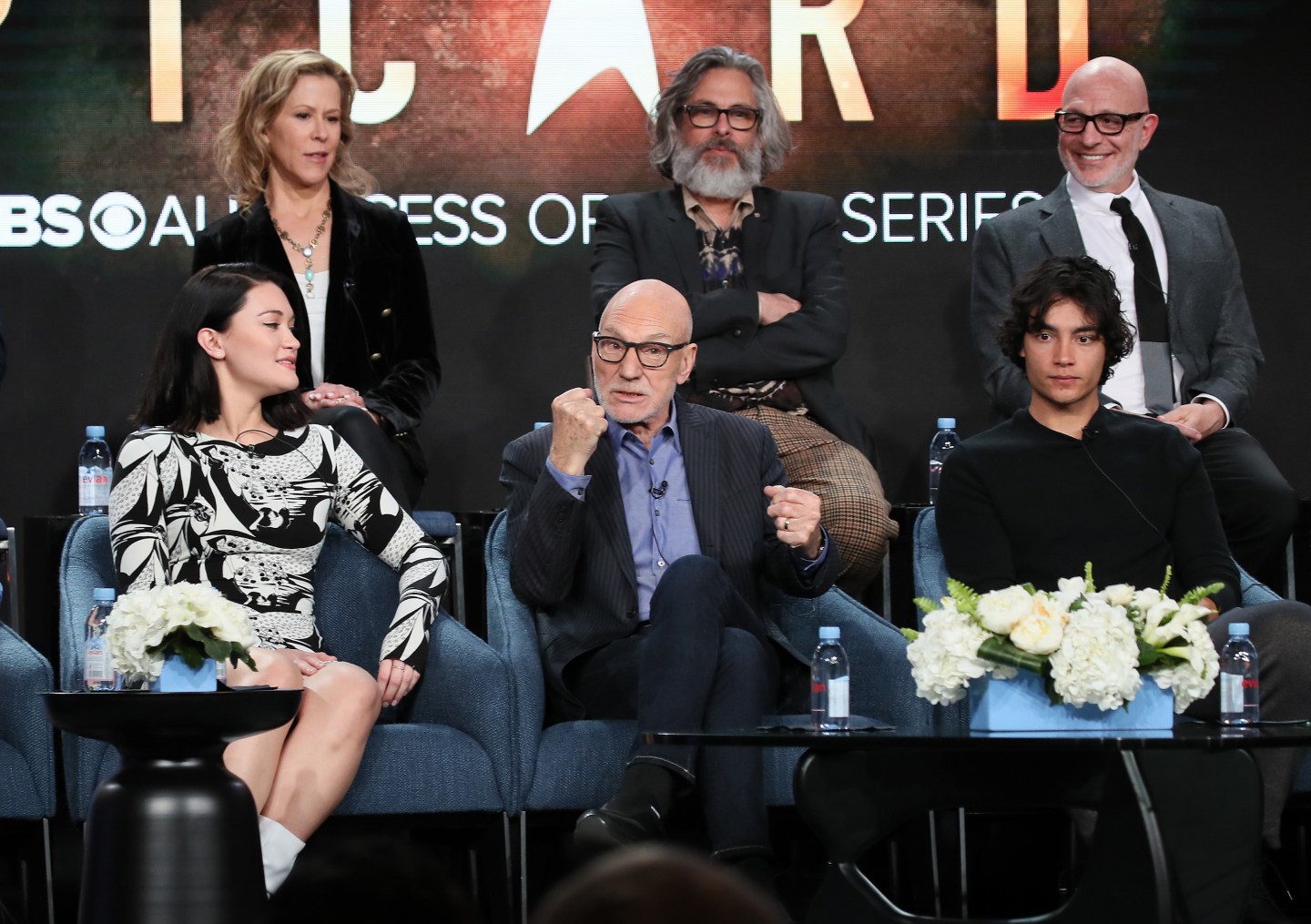 Sir Patrick Stewart allayed any fears on Sunday that his return to the Star Trek universe via forthcoming CBS All Access sci-fi drama Picard was fueled by a need to reclaim past glory.

“I was proud of the seven years we spent on Next Generation and on the movies,” he said. “Picard and I became melded. He never left me, so there was actually nothing strange about stepping into this role again. It’s been far easier than I expected.”

The ambitious, cinematic drama from executive producer Alex Kurtzman— premiering Jan. 23 on CBS’s streaming platform—sees Stewart’s beloved Star Trek: The Next Generation protagonist settled into a quiet life on Earth, 20 years after the events of the 2002 Star Trek feature Nemesis. The new Picard is still bereft by the death of his companion Data (Brett Spiner), a state of mind Stewart said was best represented by the addition of one particular costar.

“His having a dog was my idea,” said Stewart, an avid animal-rescue activist, of Picard’s canine companion, played by a pit bull named Dinero. “Picard is changed, troubled, disturbed, lonely and [racked] with feelings of guilt. To see him with a dog seemed so right. He’s looking for some form of comfort.”

Added Stewart: “Hope is the dominant emotion of everything we did on Next Generation, and on Picard, too.”

The less-tech-more-character tone of the series, which was previewed for critics and journalists, fuels what its writers said was an overt effort to not recreate the past.

“Star Trek has always reflected the fractures in our world, and our world is pretty fractured right now,” said Oscar-winning writer Akiva Goldsman (A Beautiful Mind), who also serves as an EP and director on Picard. “Feelings of marginalization, not being open-hearted, nor having empathic eyes… they’re pervasive problems we all saw as rife for healing in the series.”

Added Picard EP/writer and novelist Michael Chabon (Wonder Boys): “For the technology that’s represented in the show, we tried to make it as self-evident as we could. It’s pretty light on techno-babble. I’d try to slip a little in, but then I’d be encouraged to take it out.”

Picard showrunner Kurtzman, who debuted in the Star Trek universe as the cowriter of J.J. Abrams’s 2008 feature Star Trek, emphasized the effects-heavy playground in which Picard’s creators are able to create, but also the responsibility he feels to ground the narrative as much as possible.

“In the golden age of streaming, we get to make movies on TV and we embrace the best of that,” said Kurtzman. “But when you watch any Star Trek show, it has to look different from the other series. So the first chapter of Picard spends a lot of time on Earth. I didn’t want to rush it. We need to see the condition of his life and watch him evolve.”

Picard is arguably the biggest swing yet taken by CBS All Access since its 2017 debut with Star Trek: Discovery and The Good Wife spinoff, The Good Fight. And they’re betting really big on Stewart’s return to TV: 10 days ahead of the series’ debut, the streamer announced it had already renewed the drama a second season, with a rumored third to follow.

During its presentation, CBS All Access touted other hot properties, both fresh and returning: the new Peter Sarsgaard true-crime drama Interrogation, premiering Feb. 6; the forthcoming fourth season of Robert and Michelle King’s Good Fight; and just-announced series from Kurtzman and Jenny Lumet (the Silence of the Lambs spinoff, Clarice), an animated variety show from Stephen Colbert, and an animal-rescue docuseries from Richard Linklater.

—When it comes to streaming media, Quibi made the most of CES
—Hulu will exclusively stream new FX series—and other updates from peak TV land
—How Neil Young’s eccentric online home was born
—Could Disney have more faith in X-Men spinoff The New Mutants than Fox did?
—Inside 1917: designing a World War I battlefield
Follow Fortune on Flipboard to stay up-to-date on the latest news and analysis.