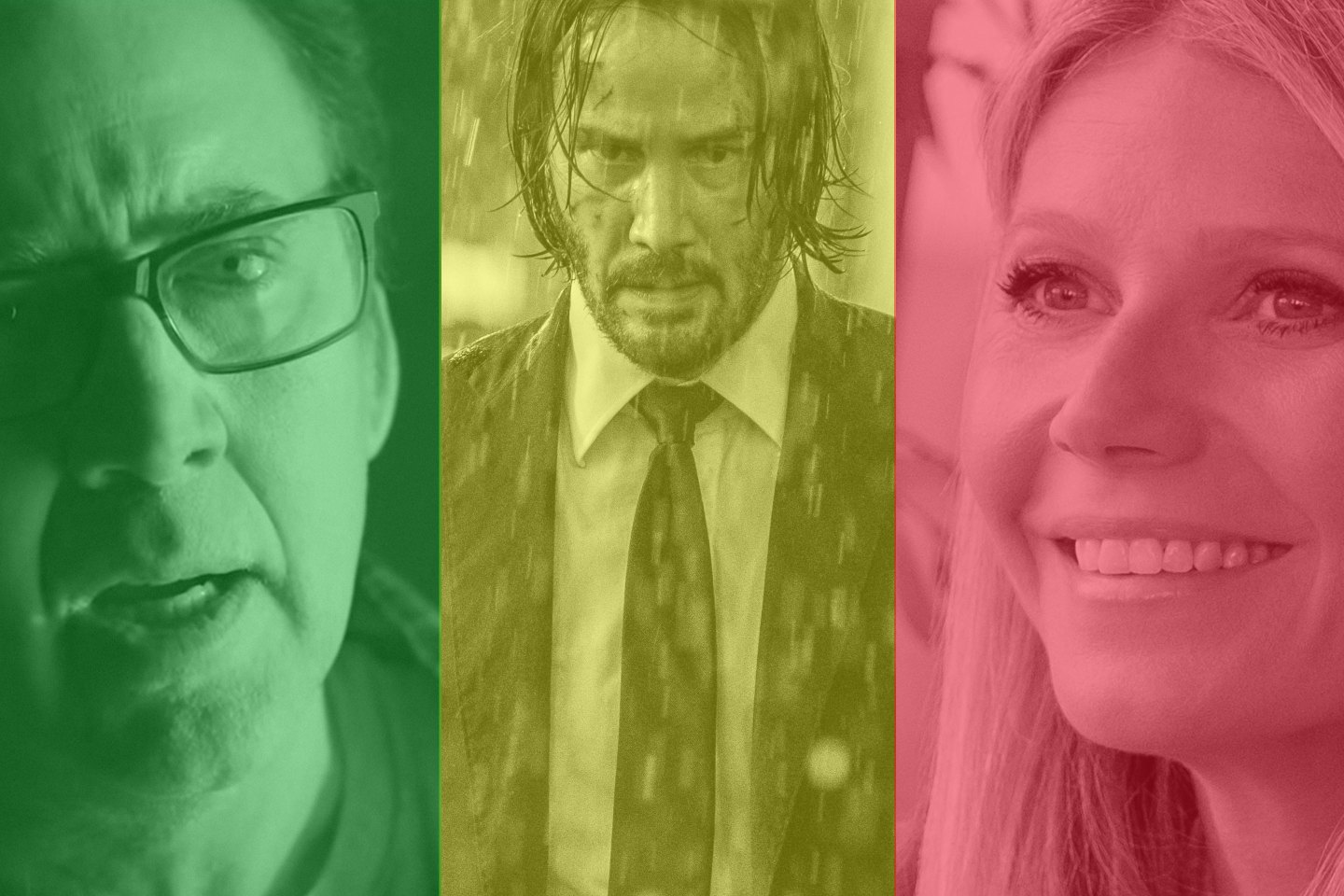 SEE IT: ‘Color Out of Space’ (In theaters)

South African auteur Richard Stanley returns for his first film as a director since being infamously fired off The Island of Dr. Moreau in 1996, and if this vivid, terrifying H.P. Lovecraft adaptation is any indication, the time off’s only made him sharper.

Behind the camera of this gorgeously hallucinogenic, strangely moving film, Stanley floods the screen with colorful psychedelia and some impressively grotesque body-horror imagery, but his more impressive triumph is a matter of pacing. A story that ends in an entirely different place from where it starts, narratively and tonally, Stanley’s adaptation is a character-driven slow-burn that at around the hour mark abruptly explodes in a blaze of loopy, creature-feature chaos.

He’s aided in that sense by star Nicolas Cage, perhaps one of the best working actors at pulling out all the stops; across films as disparate as Vampire’s Kiss, Ghost Rider, and Mandy (to name three of 30), he captures the delirious, darkly comic splintering of men confronted with impossible circumstances. Casting Cage in your movie can sometimes feel like a stunt to cover up weaknesses in the script, something like hiring a clown to entertain at your kid’s sparsely attended 10th birthday party—in other words, it can backfire in any number of disastrous ways. Here, he’s just the right man for the job. Cage plays Nathan, an alpaca farmer who—with his wife Theresa (Joely Richardson), who’s recovering from cancer, and kids Benny (Brendan Meyer) and Lavinia (Madeleine Arthur)—one day witnesses a meteorite dropping out of the sky, crash-landing in their yard and beginning to emit a pink/purple haze none of them can quite identify. Then, well, things change, and not in a way that bodes well for the family.

Color Out of Space is famously one of Lovecraft’s trickier short stories, and the author’s personal favorite. Its articulation of “the alien” as something transformative and inescapable, steadily mutating both the landscape and the people living in reach, has aged particularly well; it was most recently adapted, albeit unofficially, in Annihilation, which saw the alien as something unknowable and beautiful. If the original story was in many senses about cancer, how metastasis must feel like a ceding of ground to something that doesn’t belong there, Annihilation likened it more to depression, the idea of a “death drive,” self-destruction that stems from emotional extremis instead of a disease.

Stanley’s Color Out of Space, a much more straightforward adaptation, disagrees with this and sees the alien as something monstrous and terrifying. It’s unsurprising to learn the filmmaker came across the story as his mother was battling cancer. There’s something deeply personal about it, especially as the family unit faces an apocalypse so assured that they actually begin to embrace it. That such a devastating, gruesome concept is relayed with such artistry and aesthetic beauty feels, though, like proof Stanley was the perfect choice to tackle this property. News that he’s plotting a trilogy of Lovecraft adaptations is music to the ears; science-fiction and horror are in sore need of movies as odd and deeply felt as this, and even stranger things.

The John Wick movies are bloody, bullet-strewn ballets, action extravaganzas that move with a grace and precision so head-and-shoulders above near everything else in the genre that they’ve rightly been commending for triggering a full-on renaissance, in both star Keanu Reeves’s career and action filmmaking on a whole.

Chapter 3 – Parabellum can’t help but to feel privy to this success, playing like something of a victory lap for stuntman-turned-director Chad Stahelski, who made his debut codirecting the first John Wick with David Leitch. It picks up where Chapter 2 left off, with Reeves’s once-retired assassin racing through New York as every card-carrying member of the secret society of killers to which he once belonged competes to collect the $14 million bounty on his head. In a bravura opening sequence, Wick utilizes every tool at his disposal to slow down his pursuers, weaponizing the likes of a library book, a belt, and a horse to make his eventual escape. For all their action operatics, the greatest kick these movies offer is Wick’s wry and brilliantly tactical thought process, as he tries to figure out any number of creative ways to dispatch his adversaries (or just pumps them full of lead), and Reeves has only grown more comfortable in the role.

As its elongated title might suggest, Chapter 3 – Parabellum is a calculated scaling-up of the franchise’s scope and ambitions, two-plus hours of furious gunfights and breakneck escapes that, within all its mayhem, whirs rather mechanically as it lays the groundwork for even bigger, bloodier battles to come down the line. (The title translates from Latin as “prepare for war,” as in “if you seek peace…”). It’s this franchise’s Infinity War in every sense, including the worst ones: a globe-trotting adventure that is itself loaded to the brim with frenetic and sometimes arrestingly gorgeous fight sequences but holds off on applying real emotional stakes to any of them by advancing the logic that such concerns can be dealt with in the next chapter.

That’s not to say Chapter 3: Parabellum doesn’t satisfy. If you’re seeking nonstop carnage shot with an artist’s sensibility and choreographed as elegantly as anything in the Bolshoi’s latest season, Parabellum is the meatiest and most technically accomplished entry in the series. But as the John Wick universe expands, one hopes Stahelski will exercise a little more restraint next time around—franchise bloat is one adversary even Wick’s most devastating roundhouse kick won’t topple.

Gwyneth Paltrow, once known for acting, has emerged as a self-styled health guru across the past five years, riding the success of her wellness brand Goop. Her empire, polished to a preternaturally high gloss and channeling an excessively moisturized brand of feminism, has become a $250 million operation largely by convincing Americans to buy their way into better health.

More specifically, Goop’s built on exploiting the body dysmorphia and everyday anxieties of middle-class women, selling them on pseudoscientific treatments such as inserting jade eggs into your vagina and taking pills that “address multiple systems in the body that contribute to optimal metabolism” for when yours is slowing down (i.e. when you age, as most of us non-Hollywood folks do). It’s all fairly depraved, as we’re reminded when candles that smell like Paltrow’s vagina sell out online, though no less so than any of the dietary supplements peddled to men across the Internet’s backpages, including InfoWars (which sells many of Goop’s same products despite dressing them a little differently).

Enter The Goop Lab, Paltrow’s Netflix series expansion of the empire, which plays less like woo-woo corporate propaganda than you might expect it to without really emerging as much of anything in its own right.

Each episode looks at a different health or wellness trend, featuring an expert who walks audiences through what their chosen process is and how everyday consumers might be able to apply it to their daily lives. Paltrow’s on camera intermittently, occasionally popping in to participate in a wellness ritual but more often ceding ground to people serving more or less as health-guru tour guides. A focus on stories of people who overcame various struggles leads to some interesting moments, such as an episode on orgasms that, in addition to pushing boundaries, emerges as a surprisingly affirming look at the beautiful individuality of women’s bodies.

But The Goop Lab, which carries the disclaimer that it’s “designed to entertain and inform, not provide medical advice,” still furthers the Goop brand’s insinuation that medical doctors won’t do nearly as much for you as alternative healers, that accessing your inner “energy” can be as much a path to salvation as professional medical care. The truth is that Paltrow is exploiting a failure on the behalf of the worldwide medical community: namely, that women experience pain all the time without being adequately treated or often even being believed by their doctors. And even in instances when doctors are in agreement that there’s a biological cause for a woman’s suffering, as in the plight of women living with chronic illnesses like IBS, they’re often powerless to offer practical, effective treatments.

But therein lies the danger of The Goop Lab and Paltrow’s brand of woo-woo lifestyle coaching. For all their wide smiles and empowering messages, Goop lacks the scientific backing to posit its bizarre wellness trends as actual solutions that can improve people’s lives. That it does so with such nonchalance feels misguided at best and at oftentimes downright deluded.

—Zombi Child auteur Bertrand Bonello on colonialism, French trap music, and a “cinema of fear”
—Sundance 2020: Hunting for the next indie hit and what it may be worth
—Awkwafina Is Nora From Queens team: Asian-American representation is not a “fad”
—Parasite director Bong Joon Ho dissects his tale of two families
—The History channel’s aliens and UFOs content continues to blossom as Project Blue Book returns
Follow Fortune on Flipboard to stay up-to-date on the latest news and analysis.