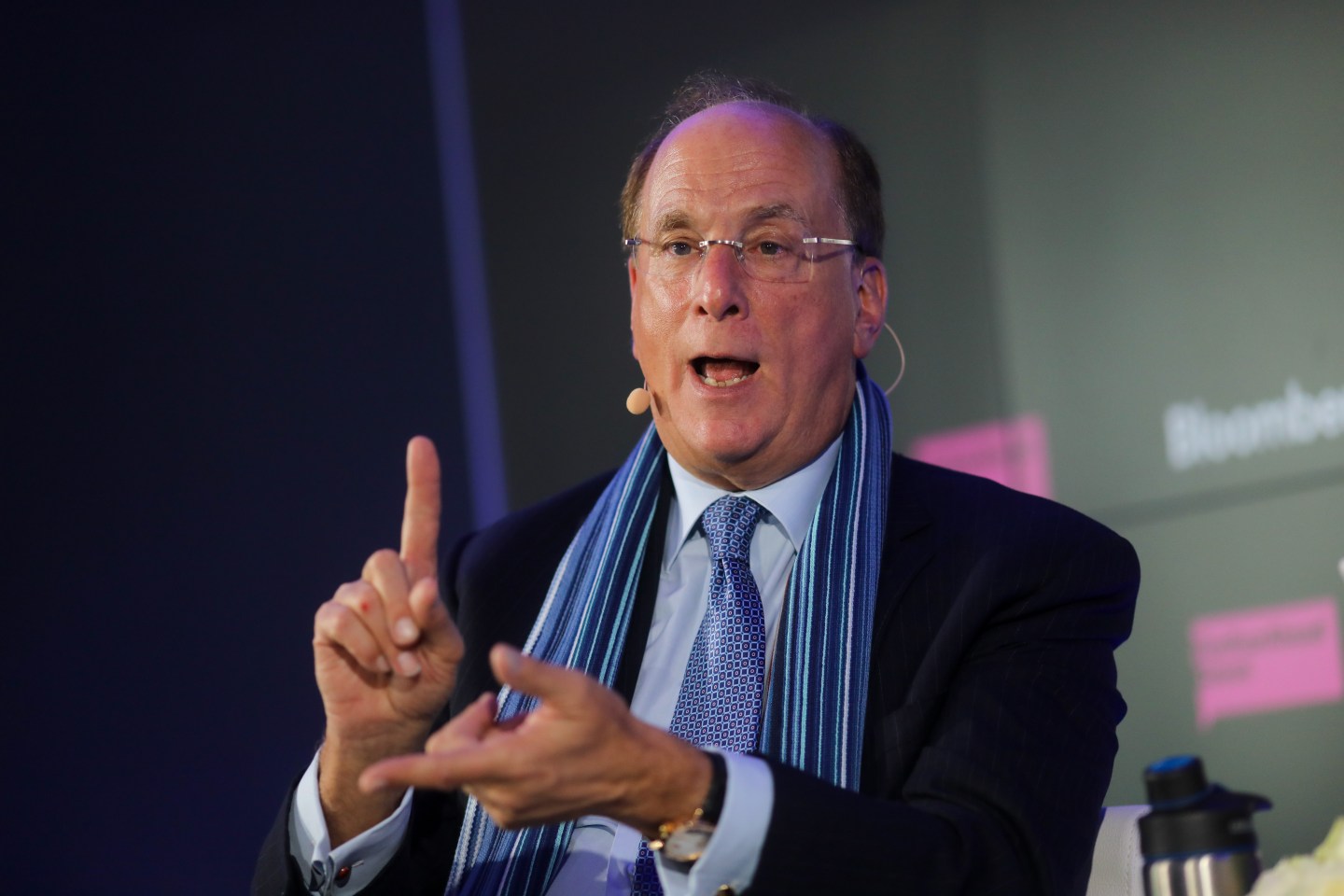 Larry Fink said it would redirect the roughly $7 trillion of assets the firm manages toward environmental sustainability and devoted his annual letter to sounding the warning on climate change, saying the evidence of the risk is “compelling investors to reassess core assumptions.”
Simon Dawson—Bloomberg/Getty Images

It was the usual setup for panelists at a finance conference talking about making smart investments. They were all the same gender.

In this case, all women. That probably wasn’t  surprising, considering the event was hosted by the United Nations-backed Principles for Responsible Investment. Still, Karine Hirn, founding partner at East Capital in Hong Kong, watched in admiration. She celebrated on Twitter: “Climate finance is at last opening up perspectives for great talent within the otherwise very unbalanced world of finance.”

Men rule that world, except for one key field: the fast-growing arena of what’s known by the shorthand ESG. There’s big money pouring in, and there are big names promoting the idea of applying environmental, social and governance standards to the business of making money.

Which means, of course, that the men may try to muscle in.

“The ESG person was once seen as a junior. Now their expertise is considered essential,” said Rebecca Chesworth, senior ETF strategist at State Street Global Advisors, where she’s on a team developing investment strategies to promote environmental and social goals. “And so now many more men are paying attention.”

For decades a finance backwater, responsible investing—variously also called sustainable or values based or ethical—is having its moment. Fund bosses are under pressure from shareholders, clients, employees and activists to use their resources to fight climate change or address a raft of other issues, such as workplace diversity or LGBTQ rights or corporate governance on compensation.

The behemoth BlackRock Inc. announced its shift last week, when founder Larry Fink said it would redirect the roughly $7 trillion of assets the firm manages toward environmental sustainability and devoted his annual letter to sounding the warning on climate change, saying the evidence of the risk is “compelling investors to reassess core assumptions.” Because of it, Fink said, “I believe we are on the edge of a fundamental reshaping of finance.”

That would catapult to new heights the profiles of ESG teams at banks, money-management firms and public companies, the rare area in finance where the gender imbalance in top jobs isn’t hugely lopsided in men’s favor.

“As sustainable finance roles rise in prominence, so do the many women that occupy them,” said Jane Ambachtsheer, global head of sustainability at BNP Paribas Asset Management in Paris. “It’s a bit of a fast track to get women into more influential positions as more people realize connecting finance with the real economy is a critical issue.”

Hard data are limited, but according to what’s available, and interviews with more than 30 ESG executives, women are unusually well represented in decision-making roles, including top spots. They lead ESG units at firms including JPMorgan Asset Management, Invesco and Fidelity Investments.

“ESG was not always popular or glamorous,” said Bonnie Wongtrakool, a portfolio manager and global head of ESG investments at Western Asset Management in Pasadena, California. “If you have an important but thankless task, you give it to a female, because you know they will get it done.”

Assets managed using a broad definition of the ESG approach are growing. They were at $23 trillion at the start of 2016, up 73 percent increase from four years earlier, according to the Global Sustainable Investment Alliance, whose members are financial companies, including Bloomberg News parent Bloomberg LP.  Now they’re over $30 trillion.

“ESG has become a central discipline,” said Emily Chew, global head of ESG research and integration at Manulife Investment Management in Boston, Early on, “it was marginal and was not seen as attractive to young men wanting to build their careers.” Now, “there’s a war on talent that favors people who have been involved in ESG for years, including many mid-career and senior women.”

Over the past five years, 44% of the top ESG jobs that recruiter Acre Resources helped fill went to women. That’s a stark difference from the industry in general. Women on average made up 17% of senior managers and investment advisers and managers in the U.K. last year, according to the Financial Conduct Authority, and their share of those roles had barely changed since 2005. In the U.S., McKinsey & Co. data show that women are in 22% of similar positions at asset managers and investment banks.

A survey by Responsible Investor and the Sustainable Finance Network found that the ranks of men and women in the business of sustainable financing “to be almost equal”—though, tellingly, another finding was that men are twice as likely to be in roles commanding more than $197,000 annually.

Where women are vastly outnumbered is in the dedicated investment or financial product roles, with just 19% of those filled by women, according to Acre Resources. And last year, data compiled by Bloomberg show, all but one of the top-10 best performing sustainable funds as ranked by Morningstar Inc. were run by men. The exception had three managers, two male, one female.

The numbers could get worse, said Ian Povey-Hall, principal consultant for sustainable and impact investing at Acre Resources. “There could be a temptation for senior management to withdraw their support from the women that have been key to the development of those franchises in the wilderness years when appointing senior investment roles, reverting back to more jobs for the boys.”

Wall Street, often criticized for its lack of gender diversity the closer jobs get to the C-suite, has an incentive to work to prevent that from happening, even if just for the sake of public relations. John Goldstein, head of Goldman’s sustainable finance group, said the talent and experience of the women in the business is too valuable for them to be shunted aside. “I would instead look for women in the space to ascend to more senior, broad based roles.”

But two others also stood out. JPMorgan Chase & Co. put a woman in charge of a new group that intends to meet United Nations sustainability goals in providing more financing and advice for development in emerging markets, while BofA hired Karen Fang for the new role of head of sustainable finance.

“This is still an emerging field,” said Lindsay Patrick, head of sustainable finance at Royal Bank of Canada’s capital markets unit in Toronto, “so there is more room and opportunity for gender equity.”

—Why investors should pick the underdogs in sports gambling
—In the optimism divide between CEOs and investors, somebody’s wrong
—6 experts on what the U.S. won (and lost) in the China trade agreement
—Fertility Inc.: Inside the big business of babymaking
—The World’s Most Admired Companies in 2020
Subscribe to Fortune’s Bull Sheet for no-nonsense finance news and analysis daily.