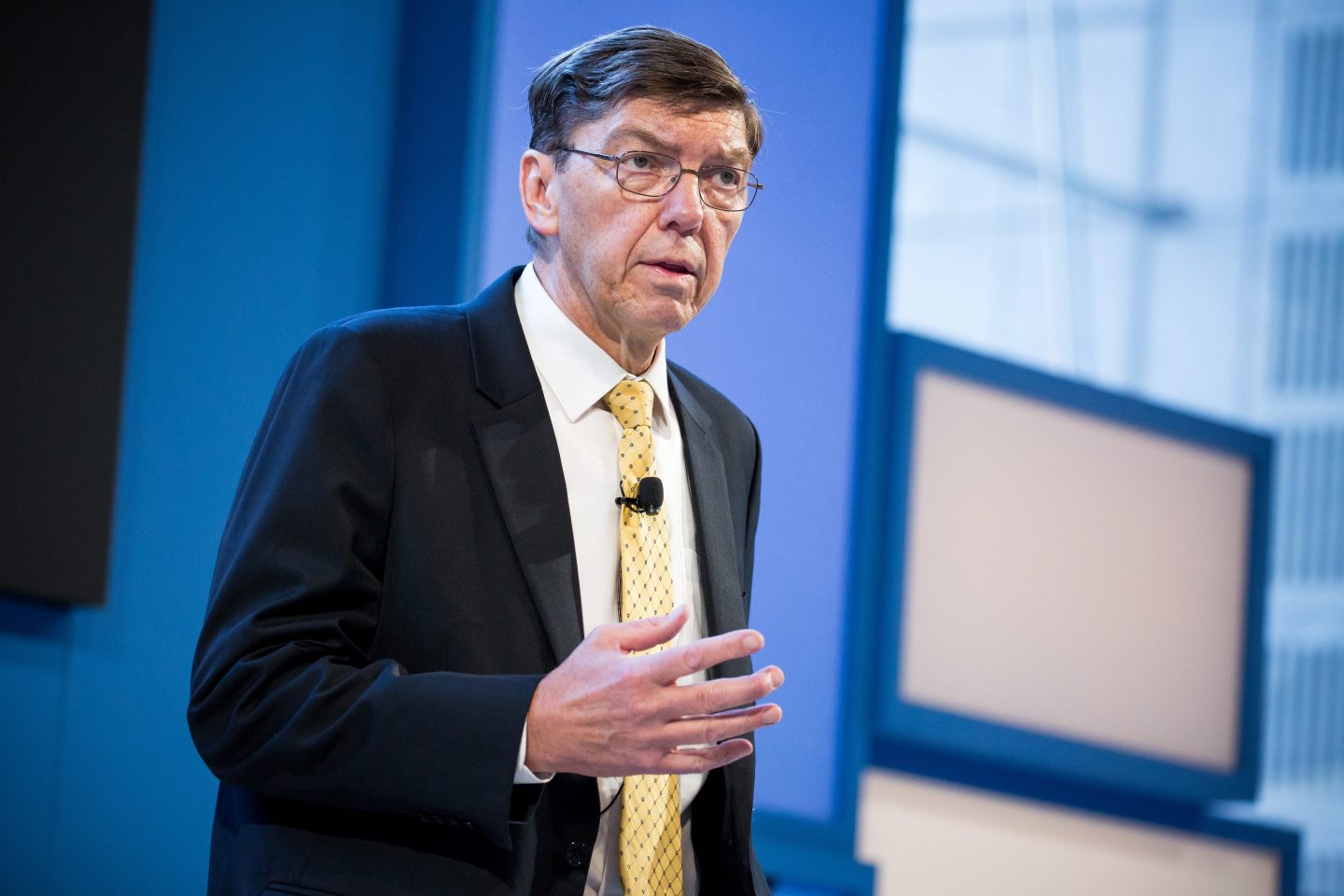 Clay Christensen, chairman and founder of Rose Park Advisors, speaks during the New York Times DealBook conference in New York, U.S., on Thursday, Nov. 10, 2016. The event brings together CEOs, leading figures in finance, and experts from diverse industries to assess the challenges and opportunities that will define the deal world of tomorrow. Photographer: Michael Nagle/Bloomberg via Getty Images
Michael Nagle—Bloomberg/Getty Images

It’s been 25 years since Harvard Business School professor Clayton Christensen came up with a theory he dubbed “disruptive innovation” to explain how new companies used technology to bring down dominant players.

Christensen passed away on Friday at 67, but his theory, introduced in a 1995 business journal article and later expanded into the best-selling book The Innovator’s Dilemma, remains one of the most influential and widely cited explanations for why technology companies rise and fall. Many of the most successful tech executives, from Apple co-founder Steve Jobs to former Intel CEO Andy Grove, credited Christensen’s insights with influencing their strategies.

Though he worked hard in the decades since to enhance and defend the theory, Christensen has said he always had one great regret: In using the word “disruption” as part of his theory, he may have invited misunderstanding and misuse of his work.

“The word disruption has many connotations in the English language,” he told the Boston Globe in 2015. “I just didn’t realize how that would create such a wide misapplication of the word ‘disruption’ into things that I never meant it to be applied to.”

The theory came to Christensen after he had already spent many years of research investigating industries ranging from computer disk drives to steel production.

His fundamental insight was that successful companies would continue improving and optimizing their existing products for their best customers. Examples he cited included the fifth blade in a razor, a clearer TV picture, or better mobile phone reception. “These improvements can be incremental advances or major breakthroughs, but they all enable firms to sell more products to their most profitable customers,” he wrote in an article revisiting the theory on its 20th anniversary.

That focus allowed space for new companies to create radically different products using new technologies and new approaches that, at first, were inferior in performance compared to the dominant products. Early customers were often buyers who couldn’t even afford to buy the dominant player’s products.

That led the dominant companies to ignore the new technology. But because the innovations were cheaper, more convenient, and otherwise more desirable, they sometimes improved enough to win over all of the customers in the market, disrupting the business of the dominant player.

Sometimes, the debate over whether an upstart company actually fit the mold of Christensen’s theory even drew in the professor himself. He argued in one article that Uber was not a disruptive innovator. Uber’s opportunity had not arisen because the taxi industry had been too focused on making its products better for its best customers. And Uber didn’t target neglected customers, but those at the highest-end instead, he argued.

Sometimes the professor’s own applications of his theory led him astray, most famously when he predicted that the iPhone would fail to win over the mobile phone market. “It’s not (truly) disruptive,” he said. “History speaks pretty loudly on that, that the probability of success is going to be limited.”

It was an uncommon mistake in a long career of explaining the rise and fall of tech companies.

—The World’s Most Admired Companies in 2020
—Will retiring baby boomers crash the stock market?
—Millions have been purged from voter rolls—and may not even realize it
—Mysterious GPS outages are wracking the shipping industry
—Google CEO Sundar Pichai on managing a tech giant’s growing pains