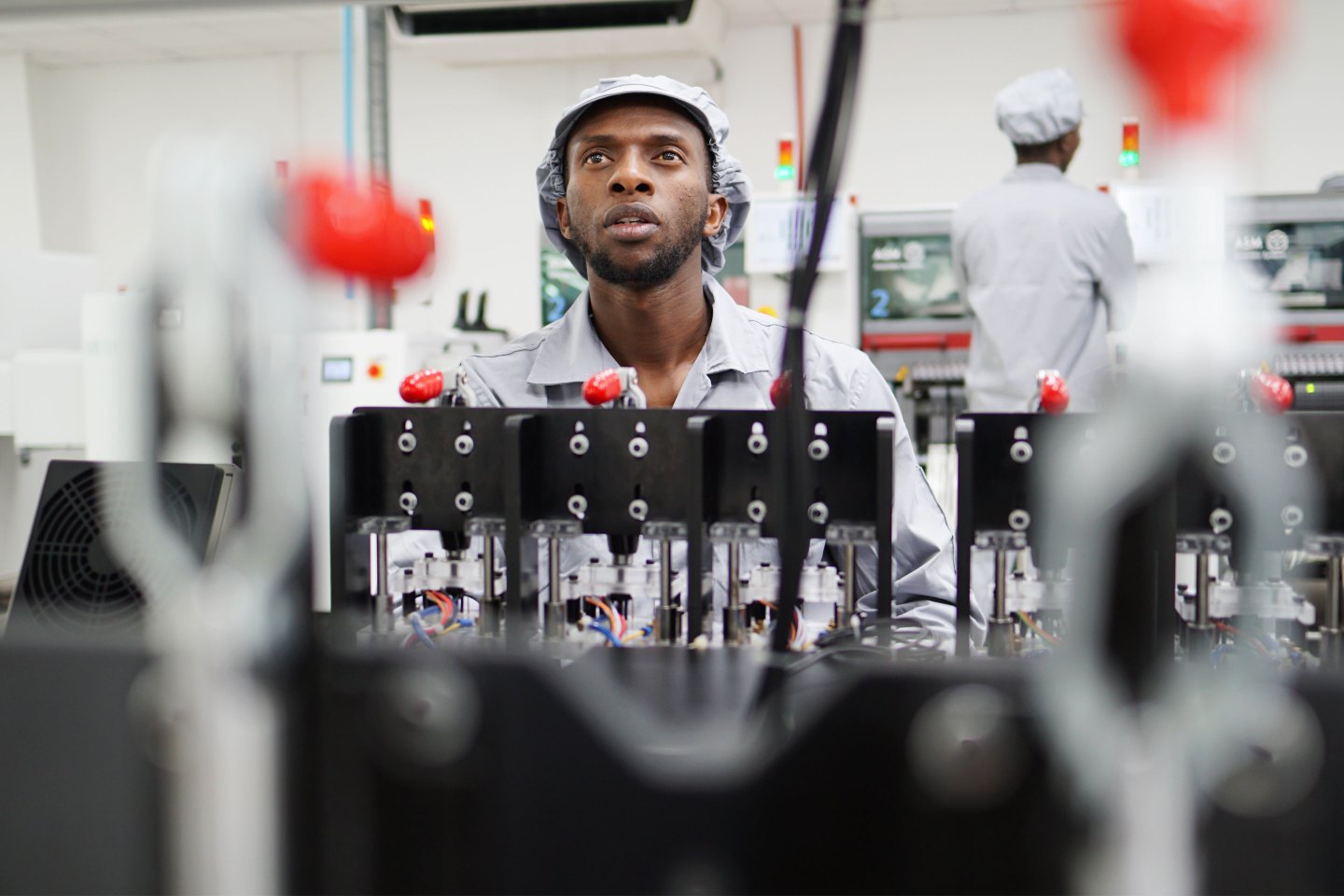 When a factory in Rwanda’s capital of Kigali debuted Africa’s first made-in-Africa mobile phones in October, their provenance wasn’t the only surprise: The devices also came loaded with higher-end features like fingerprint sensors for unlocking the screen that many rival phones used across the continent lack. It wasn’t just a push for African tech but also for African quality.

The factory, owned by Rwandan company Mara Group, was a major milestone for Kigali, which has spent a generation emerging from the ashes of the nation’s genocide in 1994 by refashioning itself as a tech hub. Already, the city is home to several tech incubators, a Car­negie Mellon University engineering campus, and local startups that produce such items as drones and cashless payment systems.

“It boils down to our turbulent past, being left with nothing, and using ashes as a construction tool for unity,” says Paula Ingabire, Rwanda’s tech minister.

Hamstrung by poverty and the legacies of the slave trade and colonialism, Africa had, until recently, been left largely behind by the global tech boom. But increasingly, it’s having success nurturing tech startups and attracting major foreign tech companies.

In November, Visa invested $200 million in Nigerian payments firm Interswitch at around the same time that OPay, a Norwegian-owned but Lagos-based mobile payment service, raised $120 million from high-profile investors including Sequoia Capital China and SoftBank Ventures Asia. Meanwhile, in May, Microsoft opened offices in Kenya and Nigeria for engineers working on artificial intelligence, machine learning, and mixed reality. A month earlier, Google opened an A.I. lab in Ghana.

In another sign of Africa’s growing tech buzz, Jack Dorsey, CEO of Twitter and payment-terminal maker Square, tweeted in November that he would spend up to six months in 2020 living on the continent. “Africa will define the future,” he said.

Still, Africa’s growing tech scene remains small and, in many ways, limited by some very stark realities on the ground. Nearly 600 million Africans lack electricity, including as many as two-thirds of sub-Saharans, and 85% of the continent’s residents live on less than $5.50 a day.

Such challenges are compounded by the inevitable operational problems that all startups face, regardless of their location. For example, Nigerian online retailer Jumia Technologies, which in April became Africa’s first tech company to hold an initial public offering on the New York Stock Exchange, recently shuttered its e-commerce operations in Tanzania and Cameroon, along with its food delivery service in Rwanda. As of mid-December, its shares had plummeted nearly 87% from their peak.

On the bright side, access to venture capital is growing. Investors poured $1.2 billion into African startups in 2018, more than triple the amount of two years earlier.

Of all the African countries pushing into tech, Rwanda stands out. A hilly nation of 12 million that’s similar in size to Maryland, its effort is centered on Kigali, named “world’s cleanest city” by the World Economic Forum.

The drive has already attracted Co-Creation Hub, a design lab from Lagos; Norrsken, a coworking space and investment fund from Stockholm; and Carnegie Mellon University, which opened its campus for 300 graduate students in 2011 and upgraded to a new campus in November.

Rwandan President Paul Kagame has long said that his goal is to make Rwanda an African Singapore. But it has become more of an African Estonia, the powerful, practical back-end workhorse of Europe’s burgeoning tech scene.

Part of Rwanda’s sales pitch to tech companies is its lack of red tape. The country ranks 38th in terms of ease of doing business, according to the World Bank, the best ranking in continental Africa and ahead of the Netherlands (42), India (63), and Brazil (124); the U.S. is sixth.

While political freedoms in the country are constrained by Western standards, social progress has piggybacked Rwanda’s social development (its parliament is 61% women, the highest percentage in the world). In 2017, the country embraced Swahili as an official language—to better integrate with its neighbors.

Whatever Rwanda is doing, it appears to be paying off. In November, the International Monetary Fund revised its growth forecast for the country in 2019 to a zippy 8.5%, up from an already strong 7.8%.

Mara Group, founded in 1996, is trying to capitalize on Rwanda’s rapid economic development and, for that matter, the similar gains taking place across much of Africa. The company’s two Android smartphones—$159 for the basic version and $229 for the higher-end one—compete mostly against cheaper models from Samsung and Chinese phonemakers Huawei and Transsion.

“Yes, it’s cheaper to import. But if we think that, we’ll never produce anything,” says Mara Group CEO Ashish Thakkar. “You have to create because a copy-and-paste approach always means that by the time you’ve pasted, you’re years behind.”

In addition to its factory in Kigali, which employs more than 200 workers, Mara has opened a plant in South Africa and is considering a third one in Nigeria.

Thakkar declined to say how many phones his company has sold, only that its devices have been bought in 46 countries, including in Europe and in the U.S.

Fresh from attending a web summit in Lisbon, Lionel Mpfizi, CEO of Awesomity Lab, a software development firm, describes Kigali’s entrepreneurialism as agile. “It takes six hours to start a business here,” says Mpfizi, who also goes by the more informal name Captain Awesome. “Since the genocide, we have been able to leapfrog progress. It was a massive reboot. Now our everyday life is a startup mentality.”

Some of Mpfizi’s recent work involves developing a ride-hailing app called Move, including chauffeured and driverless options, for a fleet of electric cars. The app is part of a partnership among Volkswagen, Siemens, and the Rwandan government to pilot the use of electric cars in Rwanda.

Ingabire, the tech minister, is fond of calling Kigali a “proof-of-concept hub.” When I note that a simpler term for that is “dreamland” and suggest she ask Rwanda’s President to promote her to minister of dreams, she laughs before regaining bureaucratic professionalism, albeit with a personal twist: “I have three children—7, 5, and 2. They will know the genocide only as history. They deserve Rwanda as their dreamland. We all do.”

Several of the continent’s cities have established themselves as important tech hubs. Here are a few examples:

South Africa’s second-largest city has a diverse tech industry, including Aerobotics, which makes drones for farmers, and SweepSouth, an Uber for domestic workers. It’s also where Naspers, a media- and tech-investing giant that owns a major stake in Chinese tech titan Tencent, is based.

Startups in Kenya’s capital include AB3D, which turns e-waste into 3D printers that make things like prosthetic limbs; money transfer startup ­M-Pesa; and crowdsourcing platform Ushahidi, which has been used for election monitoring in India and Mexico. Google, IBM, and Microsoft also have offices here.

A version of this article appears in the January 2020 issue of Fortune with the headline “Africa Gets Its Tech Buzz On.”

—7 companies founded in the last 10 years that you now can’t live without
—The world’s fourth-largest economy is going cashless
—2020 Crystal Ball: Predictions for the economy, politics, technology, etc.
—Can tech save the air travel industry from its delay problem?
—How to make sure your in-flight Wi-Fi isn’t terrible
Catch up with Data Sheet, Fortune’s daily digest on the business of tech.