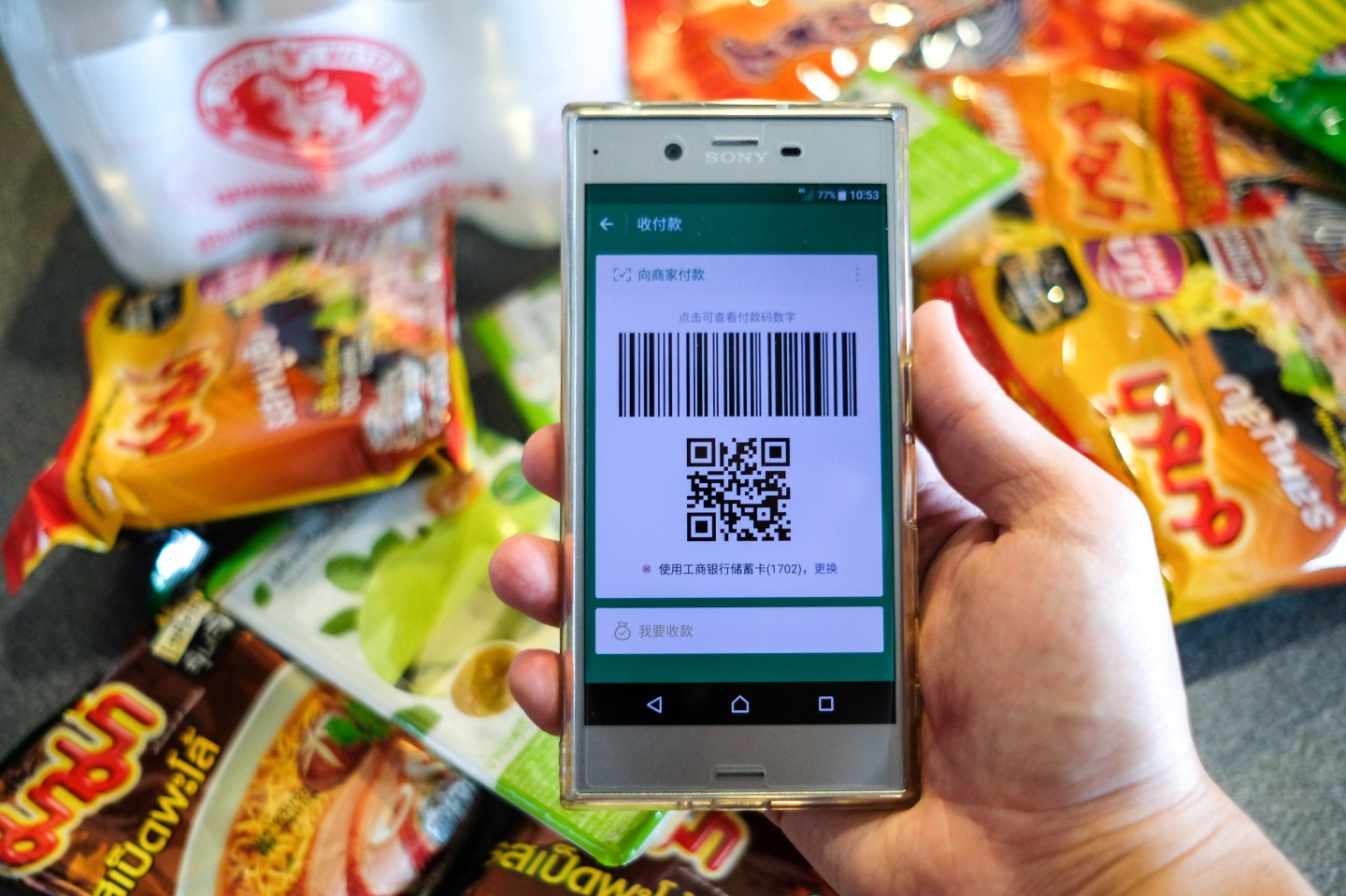 BEIJING, May 8, 2017 -- A Chinese customer prepares to pay with Wechat in Bangkok, Thailand, May 5, 2017. It is a common thing in China to take no cash and pay with a smartphone, which is installed with China's Alipay or Wechat apps. With a smartphone, people can pay almost everything such as shopping, repairing car, paying a taxi and registering a hospital. In many other countries, payment with Alipay and Wechat is becoming a new trend. Alipay's parent company, Ant Financial Services Group or "Ant Financial," has more than 200 million users in 25 countries and regions. Wechat, China's largest social media company, has also grabbed dozens of markets around the world. (Xinhua/Li Mangmang via Getty Images)
Xinhua/Li Mangmang via Getty Images

The world is moving towards cashless payment, and Asia is leading the charge with companies like Alibaba, Tencent, and Grab, and fast-growing mobile payment usage rates across the region. In China, more than 600 million people already use mobile payments, and in Southeast Asia, users are catching up fast.

“[Thailand] is still very cash-heavy [but] the world’s changing, so e-wallets, contactless payments, these things all have been growing a lot,” Wye-Shun Fong, chief technology officer of Bangkok Payment Solutions, said at the Infinity Ventures Summit in Bangkok on Tuesday.

Fortune is a sponsor of this year’s summit.

Bryan Zhou, founder and chief executive of Ksher, an e-payment solutions company backed by Sequoia Capital, said that Southeast Asia, which has a population of over 600 million, is “for sure” the most interesting market for Ksher to work in.

Southeast Asia’s 11 countries combined make the world’s fourth-largest economy, and the region has a high number of mobile and Internet users along with a speedy growth rate.

Tourism within Southeast Asia, as well as a large population of migrant workers in the region who send money back to their families in other countries, make cross-border payments a natural solution, Zhou said, adding that regulation still varies widely across Southeast Asia’s 11 countries.

“To be successful in this area, the key thing is localization,” Zhou said.

Ksher entered a partnership with LightNet, a Southeast Asia-focused financial services network, to work on a project that will allow users of super app Grab—the region’s biggest unicorn with a valuation of over $14 billion—to use the Grab’s wallet function in China. LightNet is backed by Chatchaval Jiaravanon, who is the owner of Fortune.

Zhou started off working with Tencent’s WeChat Pay and Alibaba’s Alipay to take advantage of China’s huge outbound tourism market, much of which is directed to Southeast Asian countries like Thailand. Now, stores that accept WeChat Pay and Alipay are ubiquitous in Bangkok’s many malls and restaurants.

“Many years ago, during that time there were quite few wallets in the world, but now we can see there’s a very huge number of wallet players in the world, probably more than 100, especially in this region,” Zhou said, adding that Ksher has integrated nine wallet services in Thailand, Malaysia, Singapore, and Indonesia, and will reach over 50 by the end of next year.