Hasbro’s Toy Box Is Bigger Than Ever With $3.8 Billion Entertainment One Takeover 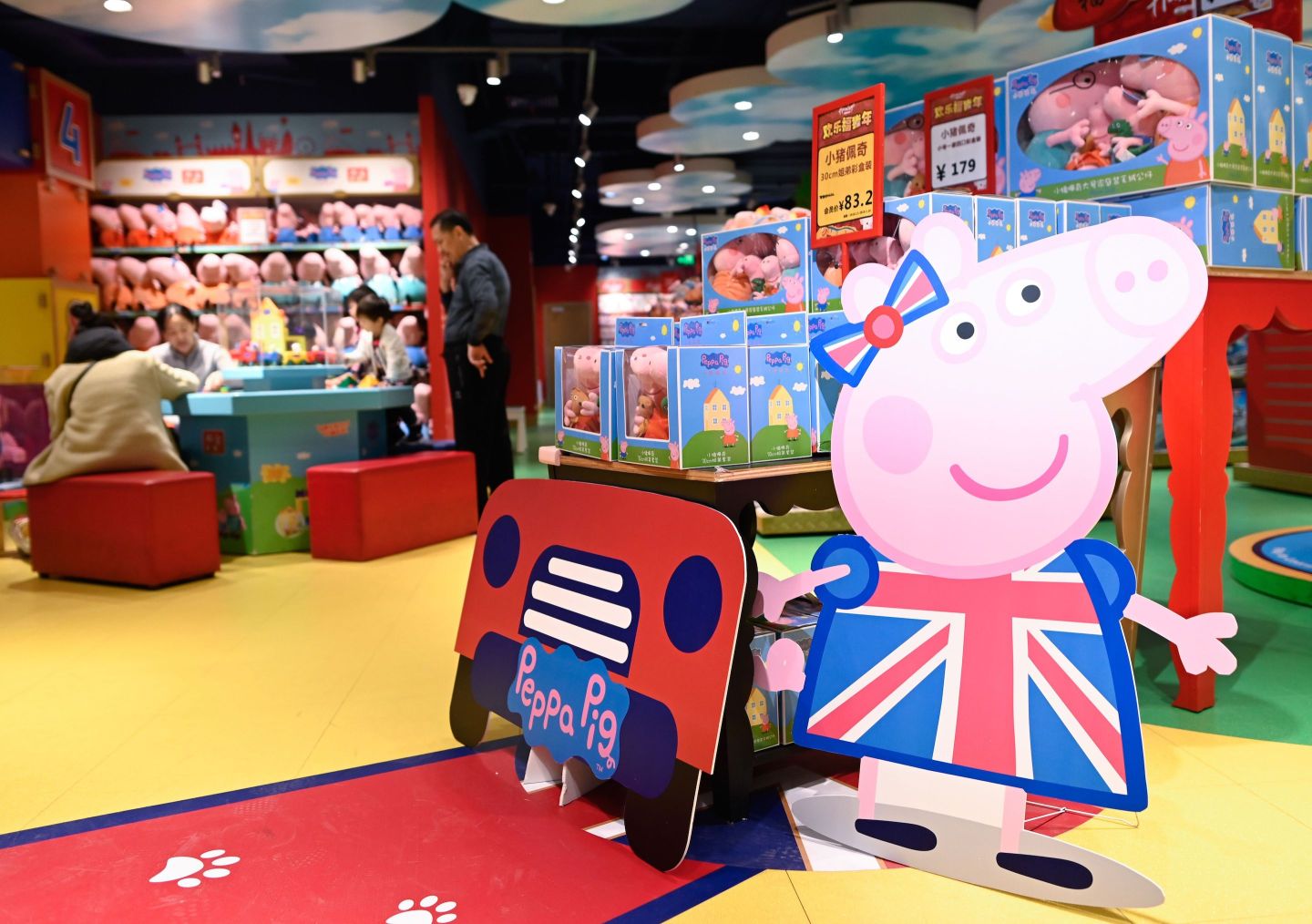 (FILES) In this file photo taken on January 25, 2019, a billboard of Peppa Pig is displayed at a toy store in Beijing. - US toymaker Hasbro announced on August 22, 2019, that it is acquiring studio Entertainment One, which owns popular cartoon series "Peppa Pig" among other children's content, for approximately $4 billion. Under the all-cash transaction, Entertainment One shareholders will receive ¬£5.60 ($6.86) per share, according to a statement from Hasbro. In addition to Peppa Pig, the pink swine with a British accent who loves jumping in muddy puddles, the purchase includes the successful children's cartoon "PJ Masks," about a trio of young friends who become superheroes at night. (Photo by WANG Zhao / AFP) (Photo credit should read WANG ZHAO/AFP via Getty Images)
WANG ZHAO—AFP via Getty Images

Hasbro has officially closed its $3.8 billion deal to acquire Entertainment One, as reported Monday.

The all-cash pact between the U.S. toymaker general and the Canadian indie studio, first unveiled last August, aims to give Hasbro the keys to animated kids series like the insanely popular Peppa Pig and PJ Masks, as well as Nickelodeon’s Ricky Zoom. It will also be able to team with eOne on its more recent expansions into feature films like the upcoming Clifford the Big Red Dog and Monster Problems, both Paramount coproductions.

The goal, as outlined by Hasbro chairman and CEO Brian Goldner, is to combine Hasbro’s intellectual property with eOne’s studio might, to better reach audiences across a range of platforms. The entertainment company’s infrastructure across spaces including film, TV, music, and retail are part of what made it such an attractive proposition to Hasbro. The content hub includes film distributors like Sierra/Affinity and TV producers like Whizz Kid Entertainment in addition to music labels and live entertainment groups; eOne recently inked a multi-year pact with Mark Gordon (Grey’s Anatomy), which will now presumably find him developing original content under Hasbro.

Entertainment One’s content library, which includes $2 billion worth of movies and TV series, could also allow Hasbro to plot out its own streaming service, pushing up demand for its merchandise with new original films and series, or else license some 80,000 hours of content to competitors like Netflix, Amazon, Disney, or Apple.

“We are excited about what we can do together and see tremendous opportunity for shareholder value creation through this acquisition,” Goldner said in a statement Monday.

Hasbro’s made little secret of its ambition to expand from toymaker to Hollywood powerhouse over the years, and its production deal with Paramount Pictures has already long-since proven that the company’s best-known properties can translate at the box office. Previously, Goldner personally architected the Transformers franchise, Hasbro’s most successful big-screen effort, which has grossed nearly $4.8 billion across six films.

The eOne deal doesn’t threaten Hasbro’s partnership with Paramount, which was reupped for another five years back in 2017. Instead, it opens up a new revenue corridor through which Hasbro brands could head to big and small screens. Through the Transformers franchise, Hasbro’s settled into a highly profitable groove over at Paramount; the film studio makes, markets, and racks up box-office receipts from pricey blockbusters like the Transformers movies, while Hasbro reaps the benefits in terms of lucrative merchandise sales, timing new product lines around film releases.

Thanks in large part to Transformers, Hasbro has soared past Mattel to become the world’s most valuable toymaker; and when Hasbro’s Baby Yoda toys hit shelves next year, it’s sure to put even more distance between itself and competitors.

But eOne offers Hasbro a new production wing through which it can pursue smaller-scale adaptations of both its and eOne’s family-friendly IP, especially ones with the brand recognition of Peppa Pig that could be lucrative without the kind of blockbuster scale that’s become a Paramount specialty. And if development of a particular IP through eOne went in a direction that interested Paramount, the opportunity to bring it under that studio will remain available.

The question now becomes in what manner Hasbro will move to adapt its newly acquired brands. New TV series seem probable, potentially to be housed on Netflix, where Hasbro made a Stretch Armstrong series in 2017, unless a Hasbro/eOne streaming service is in the offing. Film adaptations are on the table, but movies based on toys are by no means guaranteed box-office hits, and that kind of endeavor comes with a slew of added financial risks.

Key to the early success of the Transformers franchise, still Hasbro’s biggest cash cow, was director Michael Bay, an oft-derided but undeniably auteuristic filmmaker whose chosen techniques are loud, explosive, and excessively audiovisual. In his hands—and armed with the film-industry cachet of Steven Spielberg on board as a producer—Transformers became a symphony of motor grease and fireballs, as well as the hottest franchise in town back in 2007. The film’s $855 million box-office haul (adjusted for inflation) stunned Hollywood, and suddenly every studio began looking around to evaluate which long-dormant franchise might be adapted next.

Though critics largely dismissed Bay’s Transformers films as narratively incoherent and immature, their success on a global scale—which includes two $1 billion hauls for 2011’s third entry, Dark of the Moon, and 2014’s fourth, Age of Extinction—suggested the very action-heavy aesthetic derided by reviewers may have been key to their status as truly worldwide blockbusters. For Hasbro, the films’ continued popularity allowed the company to achieve a form of marketing nirvana, with action figures, lunch boxes, Halloween masks, bedsheets, and the like lining the shelves of every neighborhood superstore.

But even Transformers eventually sagged, just as Hasbro moved to fashion it into a cinematic universe. The Last Knight (2017) tried to introduce a two-story garage’s worth of mythology, melding Arthurian lore with intricate details about alien planets. The film opened low, costing Hasbro and Paramount a reported $100 million, which led to the end of the Bay-era Transformers movies.

The creatively recalibrated most recent film, last year’s Bumblebee, was a smaller affair, budgeted lower and thus a box-office success even though it made less than half of what Dark of the Moon did. Bumblebee, however, did bring Hasbro something new: good reviews. With Bay handing over the reins to director Travis Knight (best known for Laika’s stop-motion wonder Kubo and the Two Strings), and Hailee Steinfeld serving as the franchise’s first female lead (Mark Wahlberg and Shia LaBeouf had led previous entries), the film earned positive notices and suggested a new, more hopeful tone and style that could inform future installments. What the series currently lacks— and what properties like Peppa Pig may need to locate to succeed—is a Bay-esque architect, with a unique vision for what the property could be on screen.

Hasbro has had success in adapting other properties, though none as lucrative as Transformers. The G.I. Joe property was turned into two minorly successful films, 2009’s The Rise of Cobra and 2013’s Retaliation, with Paramount; they’ve jointly grossed $678.2 million worldwide, with the more recent entry pulling in the majority of that. A third entry, spinoff Snake Eyes, is set for release next year; it’s already been filmed, with Robert Schwentke (R.I.P.D.) directing and Henry Golding playing the titular commando. Other films planned at Paramount include a G.I. Joe/Transformers crossover and a more direct sequel to Retaliation.

Hasbro’s separately partnered with Universal on films like 2014’s Ouija (a commercial hit) and its better-received but lower-grossing sequel, 2016’s Ouija: Origin of Evil, as well as 2012’s Battleship, an exceptional flop given its $220 million budget (not including marketing). Another effort was 2015’s Jem and the Holograms, a box-office bomb despite being budgeted at just $5 million, and another brutal reminder to Hasbro that not all its IP is implicitly cinematic.

Whether Hasbro’s eOne acquisitions contain another phenomenon as lucrative as Transformers is a question the newly merged company will surely spend its next few months evaluating. One touchstone it will no doubt look to is 2017’s My Little Pony: The Movie, which eOne released for Hasbro in Canada. Against a slim $6.5 million budget, the film grossed more than $60 million worldwide, earning mixed reviews and emerging as a solid performer for its studios.

Entertainment One’s focus on family brands, led by Peppa Pig and PJ Masks, could make it an ideal incubator for similarly, modestly budgeted family films that don’t need to break $500 million in order to turn a profit. That said, critical and commercial hits like Warner Bros.’ The Lego Movie ($468 million against a $60 million budget) and DreamWorks’ Trolls ($346 million against a $125 million budget)—both of which generated sequels—have shown that animated family-friendly fare based on toys can rack up box-office receipts on par with the much pricier, live-action spectacles. (To wit, The Lego Movie made near-exactly as much as Bumblebee for half the cost.)

With only Snake Eyes out next year, Hasbro has a slight window to consider next steps with eOne before it will shift to focusing on the three films currently on the calendar for 2021: Micronauts, a Dungeons and Dragons reboot, and a My Little Pony sequel. Whether it’s an animated series or a Peppa Pig/G.I. Joe crossover (though the latter would be admittedly entertaining, the former seems more likely), Hasbro’s next set of announcements should shed some light on exactly how it plans to play with all its new toys.

—What did and didn’t work at the box office in 2019
—Aldis Hodge on going to “that dark place” for death row drama Clemency
—From Hellboy to Charlie’s Angels: The biggest box office disappointments of 2019
—Little Women director Greta Gerwig and cast reveal how they reinvented a feminist classic
—How Netflix transformed the peak TV terrain in the 2010s
Follow Fortune on Flipboard to stay up-to-date on the latest news and analysis.