What Is Trump’s Space Force—And What Does It Mean for NASA? 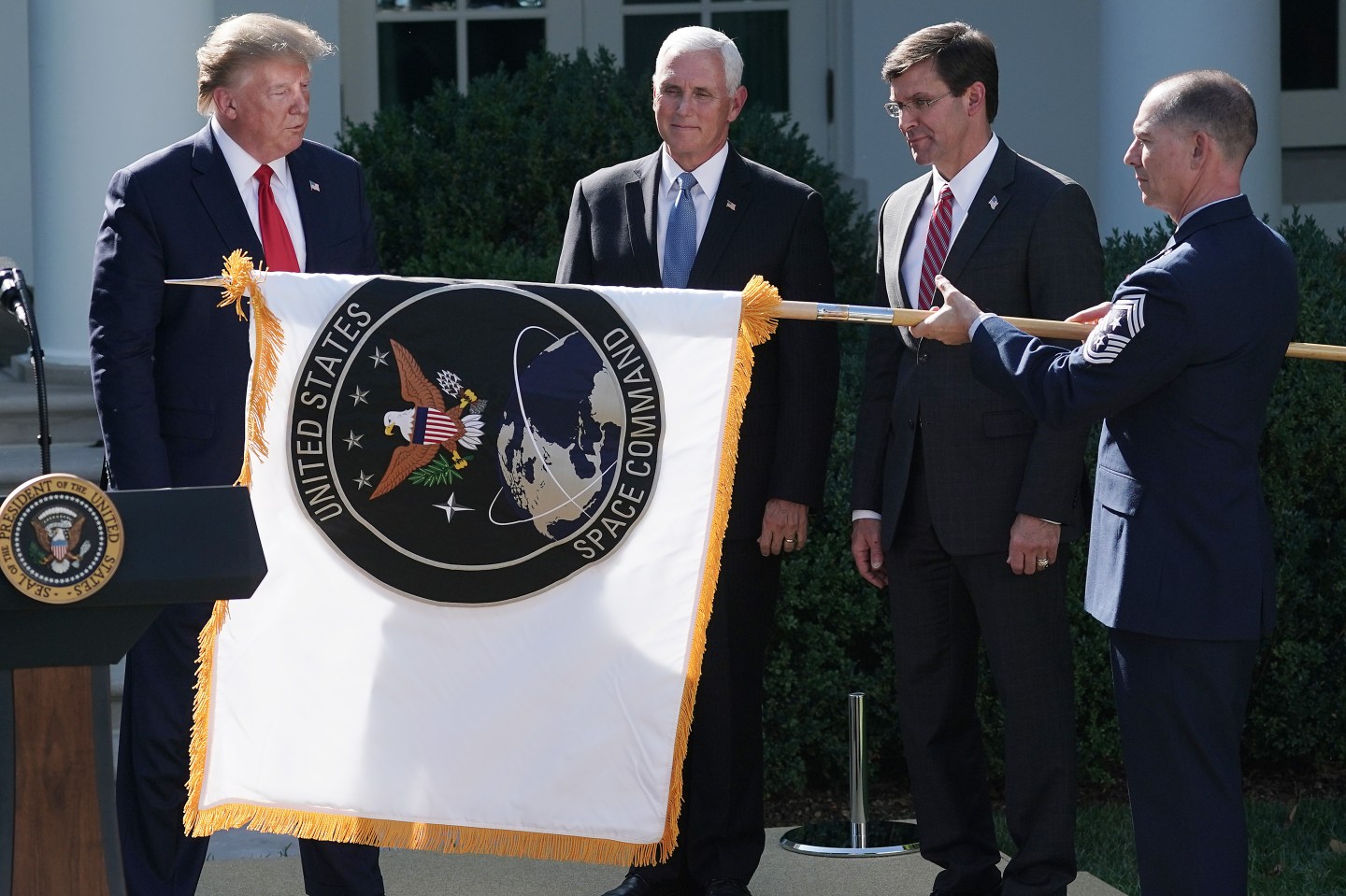 (L-R) U.S. President Donald Trump, Vice President Mike Pence and Defense Secretary Mark Esper watch as the flag for the new the U.S. Space Command is revealed in the Rose Garden at the White House August 29, 2019 in Washington, DC. Citing potential threats from China and Russia and the nation’s reliance on satellites for defense operations, Trump said the U.S. needs to launch a 'space force.'
(Photo by Chip Somodevilla/Getty Images)

Satellites make much of modern warfare possible, through GPS systems, wireless communications and sophisticated weather forecasting. This makes them tempting military targets. The U.S. Air Force has been responsible for defending American satellites and spacecraft. President Donald Trump said in 2018 that the perils required a separate military branch. More than a year later, House and Senate negotiators have reached a tentative agreement to fund Space Force, the first new military service in seven decades.

1. What would a Space Force do?

In a 2018 report to Congress, a Department of Defense plan called for aggressive offensive capabilities to defend U.S. interests in space. It included systems that could “degrade, deny, disrupt, destroy, and manipulate adversary capabilities” as well as joint space training and military exercises with U.S. allies. The force under consideration by Congress would sit within the Air Force, similar to how the Marine Corps sits within the Navy.

2. Is there a true military threat in space?

Yes, but not in the Hollywood sense of alien invaders attacking New York. The main threat is the ability to disable or destroy an adversary’s satellites from the ground. In 2007, China first used a ballistic missile to destroy its own old weather satellite orbiting 535 miles (861 km) above Earth; Russia has been testing a missile that could be used to strike and destroy a satellite or ballistic missile. It’s likely that other nations won’t be far behind. If you destroy a spy satellite, the flow of real-time intelligence from a particular spot in China or Iran could stop. A communications satellite that’s jammed from the ground could mean ground troops suddenly find themselves operating blindly. And because existing international treaties governing space are unclear, even civilian satellites could be targeted by nations looking to contain or punish their enemies.

3. How would a new force defend space?

The U.S. military has already been working on systems to protect satellites from threats such as jamming and destruction by “kinetic” objects, such as missiles or other satellites. And there’s a top-secret Air Force aircraft, the X-37B, which has orbited Earth for expanded periods; its missions are unknown. In a speech in 2018, Vice President Mike Pence said America should have “dominance in space.” The creation of a Space Force could mean bigger research and development budgets. Some in Congress have called for weapons that could destroy ballistic missiles from space. On a more workaday level, the Space Force would likely take over the job, now performed elsewhere in the Air Force, of tracking the world’s active satellites to make sure they don’t collide with one another or with space debris and to notify owners to reposition their satellites if there’s a possibility of impact.

Yes. The 1967 United Nations Outer Space Treaty, which bans weapons of mass destruction in space, prohibited orbiting nuclear weapons. But it didn’t prohibit other weapons. In an interview with Bloomberg in 2017, the head of the Air Force Space Command, General John W. “Jay” Raymond, said that “our goal is not to have conflict in space.” But, he added, space is “a war-fighting domain and we need to treat it as such.”

The Air Force is preparing to transfer $11 billion worth of its space-related programs to the Space Force in fiscal 2021, according to an internal memo. When he first made his pitch for an independent force, Trump called on Congress to allocate $8 billion over five years for space security systems.

6. Was the Space Force Trump’s idea?

No, though he was the first president to publicly call for a separate military branch for space. The debate over space militarization dates to at least the Cold War, when the U.S. and Soviet Union first realized that controlling space could give them an edge in a conflict. In 1982, the investigative arm of Congress urged the creation of an “aerospace force” or “space force” to develop “laser battle stations in space” that could defend against a Soviet ballistic missile attack. The following year, President Ronald Reagan called for such a system, the Strategic Defense Initiative, which critics nicknamed “Star Wars.” (It never advanced beyond the research phase; its successor, the Missile Defense Agency, uses Earth-based systems like Thaad to destroy missiles at high altitudes.) In early 2001, a commission led by former Secretary of Defense Donald Rumsfeld concluded that the U.S. wasn’t prepared to defend its enormous dependence on satellites. In 2017, House of Representatives members led by Representative Mike Rogers, an Alabama Republican, began pushing for a new “space corps.”

7. What’s the argument for taking it from the Air Force?

The argument for a new military arm rested on the notion that Air Force brass focus their budgets — and priorities — on conventional air superiority, and manage space as only an ancillary theater of conflict. But the Air Force had considered space defense one of its core missions and has had a Space Command since 1982. Air Force officials argued that setting up a separate space branch would add bureaucratic layers and slow down existing research and programs. They had said that an independent Space Force might have led Congress to pare the Air Force budget, or other parts of Pentagon or overall spending, to help pay for the new branch.

8. Do other countries have military space forces?

Yes. Russia created its Aerospace Forces in 2015. China’s space program was always part of its military; in 2015 the People’s Liberation Army added a Strategic Support Force in part to coordinate all the military’s space-related capabilities.

—How the UN’s climate efforts could change the business world
—The cap and trade market is going global—if politics are put aside
—These tech companies spend the most on lobbying
—Will Trump’s impeachment trial be the end for Democratic senators in the 2020 race?
—2020 Crystal Ball: Predictions for the economy, politics, technology, and more
Get up to speed on your morning commute with Fortune’s CEO Daily newsletter.