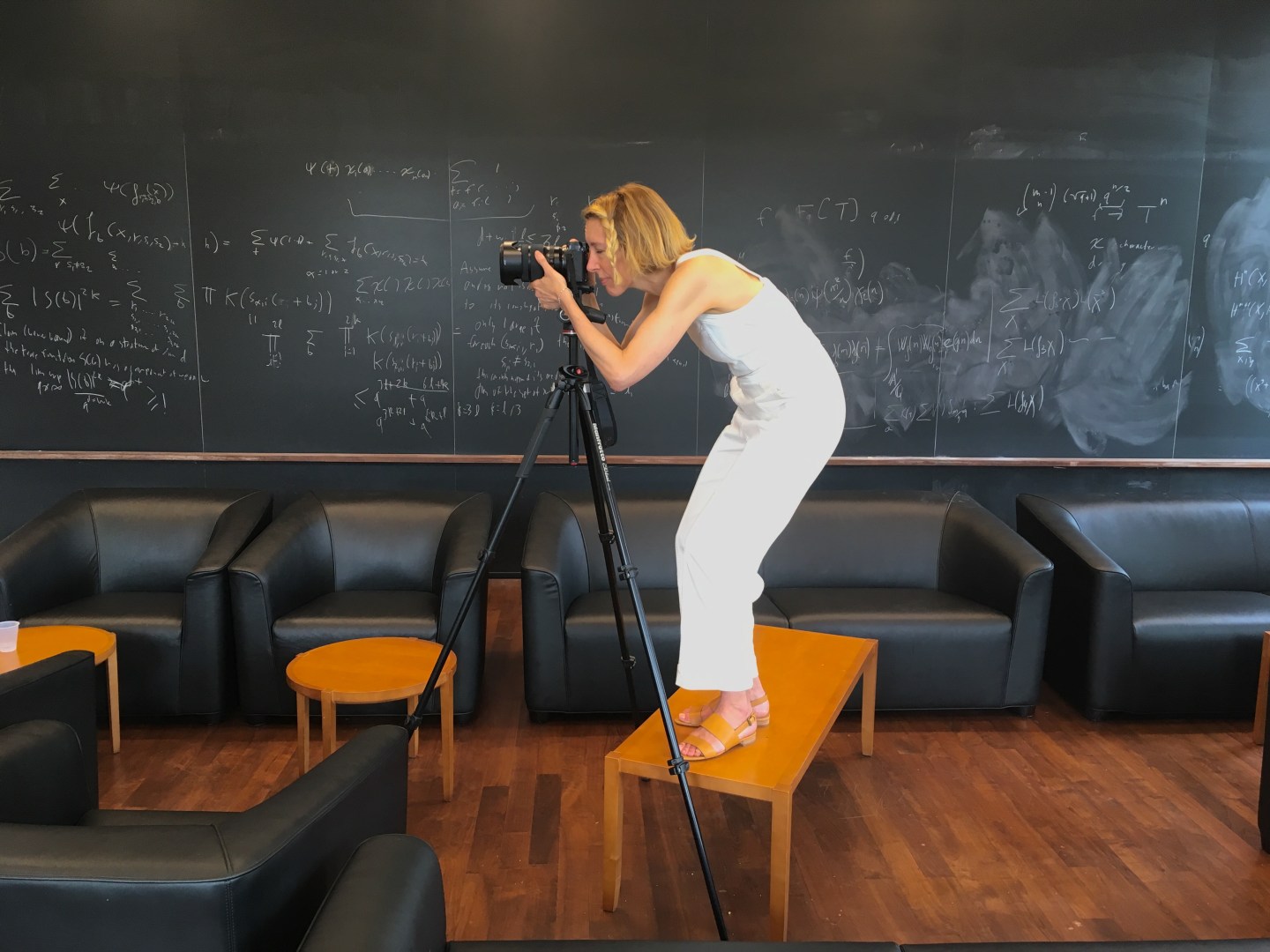 Wynne received her MFA from Yale University in 1999 and her BFA from SF Art Institute in 1994.
Jessica Wynne

“I realized over the years that math is a very creative process,” says photographer Jessica Wynne, a tenured professor at New York City’s Fashion Institute of Technology. That realization is one of many she reached while working on her latest project: Do Not Erase, a collection of 100 photos depicting a variety of chalkboards used by mathematicians. Set to be published by Princeton University Press in the fall of 2020, the endeavor took Wynne all around the globe for a year and a half.

The book’s origin story begins both in India and Cape Cod, Massachusetts. During a study abroad trip in northern India two years ago, Wynne led her students to a local school to take photos of the children attending. Venturing up to the building’s rooftop, she noticed a series of blackboards all along the perimeter. “They were filled with [what] looked to me like hieroglyphics,” she recalls. The scenario resonated with the photographer, who was already toying with the idea of working on something related to math, a field she became familiar with over the years after befriending her mathematician neighbors in Cape Cod, where she has a summer home.

Upon her return from India, Wynne consulted said neighbors about potentially photographing the chalkboards of mathematicians from all over the world, a scenario similar to what had piqued her interest back in Asia. Her friends made the introductions.

“These people are artists and I wanted to figure out a way to show what was going on in their minds,” Wynne says. “I thought that the blackboard was a really great way to express visually, in a beautiful way, [the power] of their work.” Although mostly focusing on the chalkboards, some of Wynne’s photos include cultural signifiers: in Brazil, she shot in front of a forest. In France, French writing made its way into the shot.

The chalkboard of Noga Alon, an Israeli mathematician and a professor of mathematics at Princeton University.
Jessica Wynne

In addition to striking imagery, the photographer’s intention, according to Wynne, is to “open people’s eyes to the creative side of math. There’s just this whole secret world that not many people are aware of or see.”

To do so, Wynne opted to take each photo straight-on, solely using natural light. “I’m blowing them up fairly large,” she explains. “So you almost get the experience like you’re looking straight on to a blackboard.” Each image will be accompanied by a few lines written by the mathematicians themselves: quotes about their relationship to the board, their decision to pursue the field of study or about creativity in general. “I wanted to give context to the work,” Wynne continues. “Because there’s a very limited number of people in the world that understand what’s on these chalkboards. It’s a very insular community [and] I didn’t want to just aestheticize the [slate].”

Why chalkboards, though? Would pictures of the mathematicians’ notebooks have the same effect? “In a way, the board is their instrument,” she explains. “It’s how they work out problems. [Just how] a painter might do it through their canvas and a musician through an instrument.”

But not all boards are created equal: Wynne expresses a greater interest in older ones and has restricted herself to chalkboards as both an aesthetic preference and an idealistic one: “I’m interested in the idea that a chalkboard has been around for hundreds of years and there’s a timelessness to the analogue technology”.

The chalkboard of Amie Wilkinson, an American mathematician working in ergodic theory and smooth dynamical systems. She is a professor at the University of Chicago.
Jessica Wynne

Shooting at MIT, New York University, Harvard, and Columbia—as well as research facilities and universities all over Asia and Europe—Wynne notes that the subjects fall within a large age bracket (between the ages of 25 and 85), a surprising detail to a public that likely associates the field with an older demographic.

Also on age, Wynne weighs in on the state of the photography industry, a business that has drastically changed since her years as a freelance magazine photographer. “When everything went digital, I felt a real sense of loss because I shot with a large format, 4×5 camera with film,” she says. She mentions the physicality of working with a stick camera and the sense of mystery involved in dropping off a film roll and not knowing what a photo will look like until pick-up time as losses to the all-things-digital era.

While teaching, she confesses to focusing less on the technical and more on the emotional and artistic sides of photography, aspects that have remained largely unchanged through the years. “What are you really trying to do with your work and what are you discovering in the world and what interests you?” she says are questions that she prods her students to explore.

Although she is enthusiastic about the wide-spread access to cameras in a world where virtually everybody with a phone can call himself a photographer (“it democratizes the medium!”), Wynne finds social media to be a double-edged sword. On the one hand, she thinks of it as a great marketing tool used by her students to publicize their work. But, Wynne also says, “creating your identity through external validation could be a bit damaging.” Raising a daughter in the digital age is what seems to have shaped her beliefs about the subject: “Sometimes, I realize that she experiences things through her phone and I’m just like, ‘Let’s put our cameras away, and just experience the thing instead of shooting [the thing] to post it on Instagram.’”

—Inside the newest Star Wars attraction: ‘Rise of the Resistance’
—Why cookbooks are still worth buying
—The 2019 food trends we hope carry over to 2020
—Why the owner of Jameson has been buying U.S. alcohol brands
—Fortune writers and editors recommend their favorite books of 2019
Follow Fortune on Flipboard to stay up-to-date on the latest news and analysis.