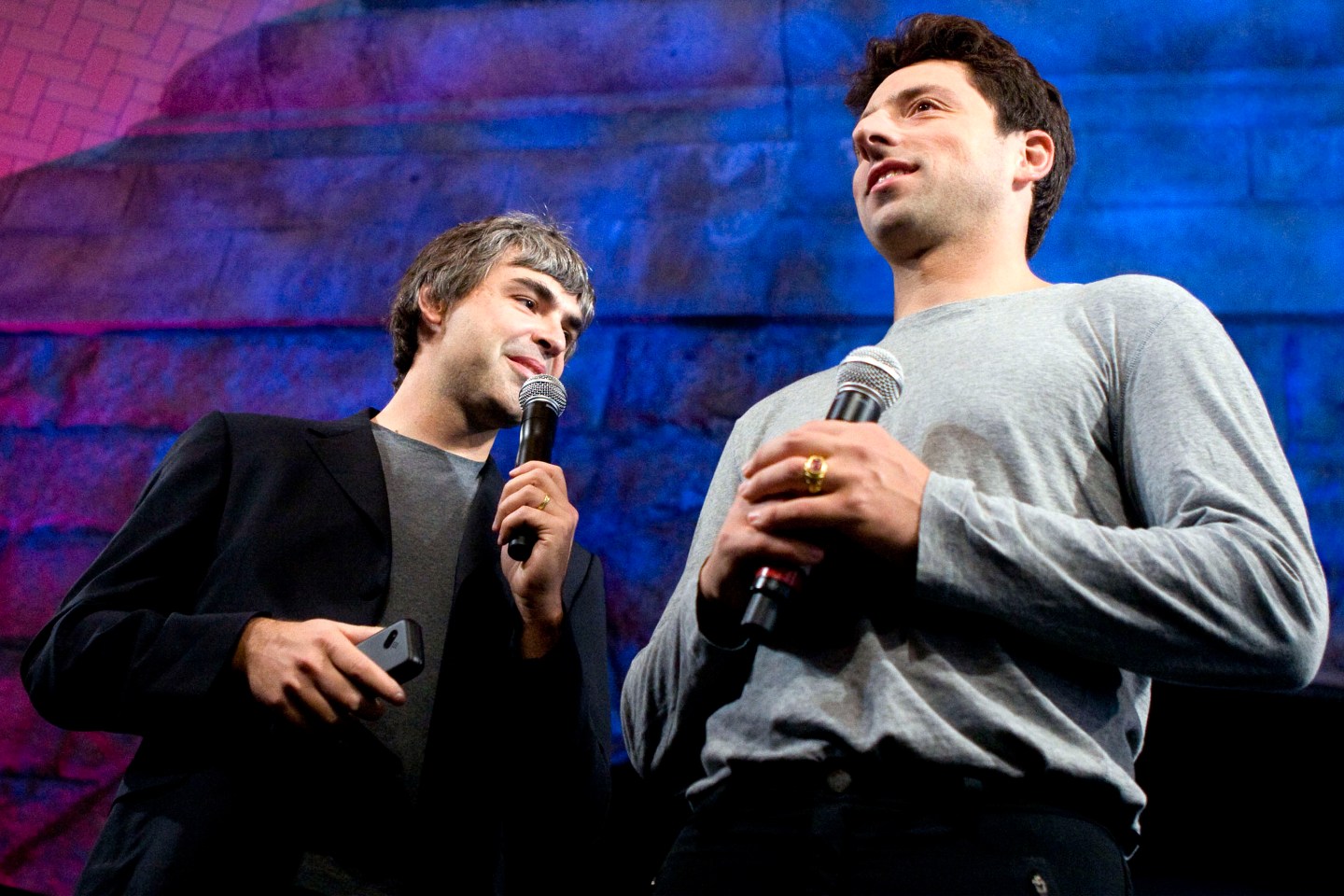 UNITED STATES - SEPTEMBER 23: Larry Page, left, and Sergey Brin, co-founders of Google Inc., speak during the unveiling of the HTC Corp. G1 mobile phone by T-Mobile USA Inc. in New York, U.S., on Tuesday, Sept. 23, 2008. The phone is the first to run on Google Inc.'s Android software and will cost $179 with a two-year contract when it goes on sale in the U.S. on Oct. 22. (Photo by Jb Reed/Bloomberg via Getty Images)
Jb Reed—Bloomberg via Getty Images

We’re not even finished with 2019 and it’s already proving to be a record year for CEO turnover. So what’s behind the revolving door that’s spinning and spinning at corporate headquarters these days?

Here are five CEO departures that exemplify the shakeup in executives suites in 2019—and what it tells us about the U.S. economy.

For most people, 21 years in one place may mark the beginning of adulthood. In Silicon Valley it signals a time to retire. Page, along with fellow Stanford student Sergey Brin, founded Google in 1998, growing it into a $950 billion search and digital ad giant. In recent years, Page and Brin have been slowly handing managerial duties over to others, notably Sundar Pichai, who took over Google in 2015 and who now succeeds Page as Alphabet CEO.

So while the departure of Page—as well as Brin, who’s stepping down as president—may seem notable, it’s not entirely surprising. Both founders are leaving Alphabet when Google is in its prime, and with several moonshots still in development. Both will also remain board members and retain voting control of the company. Still, in contrast to many of the other noteworthy CEO exits in 2019, this one seems as smooth and uneventful as they come.

When Nike announced in October Parker would be leaving the sports-apparel giant after 13 years at the helm, it didn’t generate the headlines that the turnover at Alphabet did, but it’s just as telling for the corporate world. Succeeding him was John Donahoe, who joined Nike from cloud-company ServiceNow and had previously spent 10 years at eBay, including as CEO during a successful turnaround.

Like Pichai at Alphabet, Donahoe is seen as better prepared to usher his new company through a business world that’s quickly changing in the digital era. “They’re both good examples of what’s happening in the economy right now,” says Challenger. Google’s challenges are more political than technological now, while Nike needs a leader that can manage digital growth. “It just shows that companies are really seeking out people with a new skill set.”

In January, PG&E filed for bankruptcy protection after facing at least $30 billion in liabilities related to California wildfires that investigators had linked to the utility’s equipment. PG&E’s troubles serves as a warning to other companies of the severe financial impact that a changing global climate can suddenly wreak on every facet of the business—from the top down.

Also that month, Geisha Williams stepped down as CEO after two years in the post as the board tried to show accountability in the wake of the massive, destructive wildfires, with Bill Johnson replacing her. The move, however, left only 27 female CEOs at Fortune 500 companies. Williams was also the first Latina to head a Fortune 500 firm.

Perhaps more than any CEO departure, the defenestration of Adam Neumann stands as a stark cautionary tale. Neumann led WeWork through torrid growth but mounting losses, all while investors poured capital into the workspace company. It didn’t help, and in fact likely hurt, that investor SoftBank pumped up its valuation to an irrational $47 billion just before it tried to go public, setting an impossibly high bar for WeWork to jump over.

Of course, WeWork couldn’t justify such a high valuation. The IPO’s proposed value sank near $10 billion after WeWork’s prospectus revealed antics that made would-be shareholders recoil: nepotistic policies, lax governance, and transactions that benefited Neumann, who often skipped board meetings. Even after Neumann’s ouster, WeWork pulled its troubled IPO in late September.

2019 was marked by a growing impatience among shareholders with bad or controversial CEO behavior. “Boards aren’t sweeping misconduct under the rug,” Challenger says. “They’re really quick to take action now.”

There may be a film and a TV show about Neumann in the works, but there are plenty of other examples too. The heads of McDonald’s, REI, Novatech, and Warner Bros. left after improper sexual relationships or other misconduct. Nascar ousted its CEO after a DUI arrest, while the New York Racing Association forced its CEO to resign after he used employees to do his yard work. Hacienda Healthcare’s leader exited after a patient in vegetative state for 14 years gave birth.

And yet no CEO departure was quite like Patrick Byrne’s. The headstrong CEO led Overstock from an e-commerce site into a blockchain leader, publicly battling short sellers along the way. Byrne resigned in August after his controversial “deep state” comments claiming the FBI directed him to pursue a romantic relationship with accused Russian spy Maria Butina. He then signed off by telling shareholders he would be “disappearing for some time.”

Byrne’s unique panache will be missed. And one day, his full story may finally be told.

Until then, he’s just a statistic in an otherwise rough year for the people at the top.

—7 companies founded in the last 10 years that you now can’t live without
—The world’s fourth-largest economy is going cashless
—2020 Crystal Ball: Predictions for the economy, politics, technology, etc.
—Can tech save the air travel industry from its delay problem?
—How to make sure your in-flight Wi-Fi isn’t terribleCatch up with Data Sheet, Fortune’s daily digest on the business of tech.