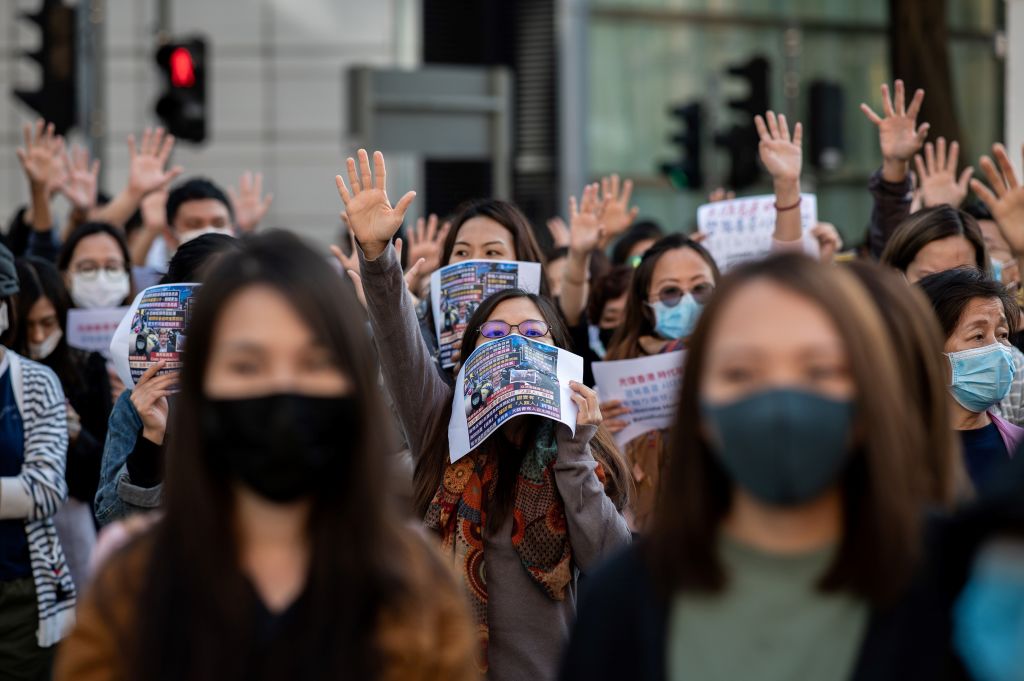 People gather in support of pro-democracy protesters during a lunch break rally in the Kwun Tong area in Hong Kong on November 27, 2019. - Hong Kong has been battered by months of mass rallies and violent clashes pitting police against protesters who are agitating for direct popular elections of the semi-autonomous Chinese territory's government, as well as a probe into alleged police brutality. (Photo by NICOLAS ASFOURI / AFP) (Photo by NICOLAS ASFOURI/AFP via Getty Images)
NICOLAS ASFOURI—AFP via Getty Images

President Donald Trump on Wednesday approved legislation giving U.S. government support to the Hong Kong protests. China called it an “American plot” with “sinister intentions,” and said it was “doomed to fail.”

Trump signed into law the Hong Kong Human Rights and Democracy Act (HKHRDA), which gives the U.S. the ability to place sanctions and take other diplomatic action on Chinese officials seen to be violating human rights in Hong Kong.

The president also signed a bill restricting U.S. exports of crowd control equipment like tear gas and rubber bullets to Hong Kong, where police have stepped up their use of force over five months of violent protests.

China’s foreign ministry accused the U.S. of interference in domestic affairs, and called it a “blatant move of hegemony.”

China has twice said it would retaliate with “strong countermeasures” if the HKHRDA became law—once after the act passed the House of Representatives in October and again after it passed the Senate on Nov. 19.

Hong Kong police search for any remaining protesters at the Hong Kong Polytechnic University, where demonstrators engaged in a lengthy standoff with law enforcement in November 2019. (Photo by NICOLAS ASFOURI/AFP via Getty Images)

The passage of the bills into law comes just as the U.S. and China are said to be nearing a “phase one” trade deal after months of stalled or aborted negotiations.

“I signed these bills out of respect for President Xi, China, and the people of Hong Kong. They are being enacted in the hope that Leaders and Representatives of China and Hong Kong will be able to amicably settle their differences leading to long term peace and prosperity for all,” Trump said in a Wednesday statement.

Many protesters rallied around the Hong Kong Human Rights and Democracy Act, seeing it as proof of international support. It is the first major piece of U.S. legislation on Hong Kong since the 1992 U.S. Hong Kong Policy Act, which laid out the U.S.’s current policy towards the semiautonomous Chinese territory.

The law will not lead to any immediate effective changes in U.S. policy towards China, but it gives the U.S. government the ability to sanction Chinese and Hong Kong officials and mandates an annual review by Congress to determine whether Hong Kong is sufficiently autonomous from China to warrant its special trade status with the U.S.

“I hope that this law could lead a wave of anti-authoritarianism in the global front and support the democratic movement in #HongKong.” Nathan Law, a founder of pro-democracy group Demosisto and a student leader in the 2014 Umbrella Movement, tweeted on Thursday after Trump approved the legislation.

Pro-democracy activist Joshua Wong, another figurehead of the Umbrella Movement who has flown to Washington, D.C., to testify in front of Congress about the protests, said on Twitter that the bill signified a “fundamental change” in the U.S.’s China policy. Wong added that he, Law, and other political activists will continue to lobby other countries “to encourage similar legislative efforts” and sanctions aimed at the governments of China and Hong Kong.

The HKHRDA may signify a political victory for its supporters, but some are worried about potential economic repercussions of the act. It gives the U.S. government the option to rescind Hong Kong’s special trade status, a feature of the city that makes it so attractive to American companies and global business.

The American Chamber of Commerce in Hong Kong on Thursday re-upped a previous statement about the HKHRDA after it was signed into law. The statement expressed concern about the possible negative impact on U.S. business interests in Hong Kong and on Hong Kong’s status as a global financial hub.

“I do not think the impact of [the act passing] will be all that big directly, but I think it will be huge psychologically,” says Dan Harris, managing partner at international law firm Harris Bricken and author of China Law Blog. “It will open the floodgates of people and companies abandoning [Hong Kong].”

—The ECB’s new mantra: ”Men go to war and the women pick up the pieces”—CEOs are facing fierce pressure on climate change—from their own kids
—After a violent “yellow vest” anniversary, what’s next for the movement?
—In the wake of Brexit, Amsterdam is the new London
—These are the jobs artificial intelligence will eliminate by 2030
Catch up with Data Sheet, Fortune’s daily digest on the business of tech.