This startup wants to be the PayPal of weed 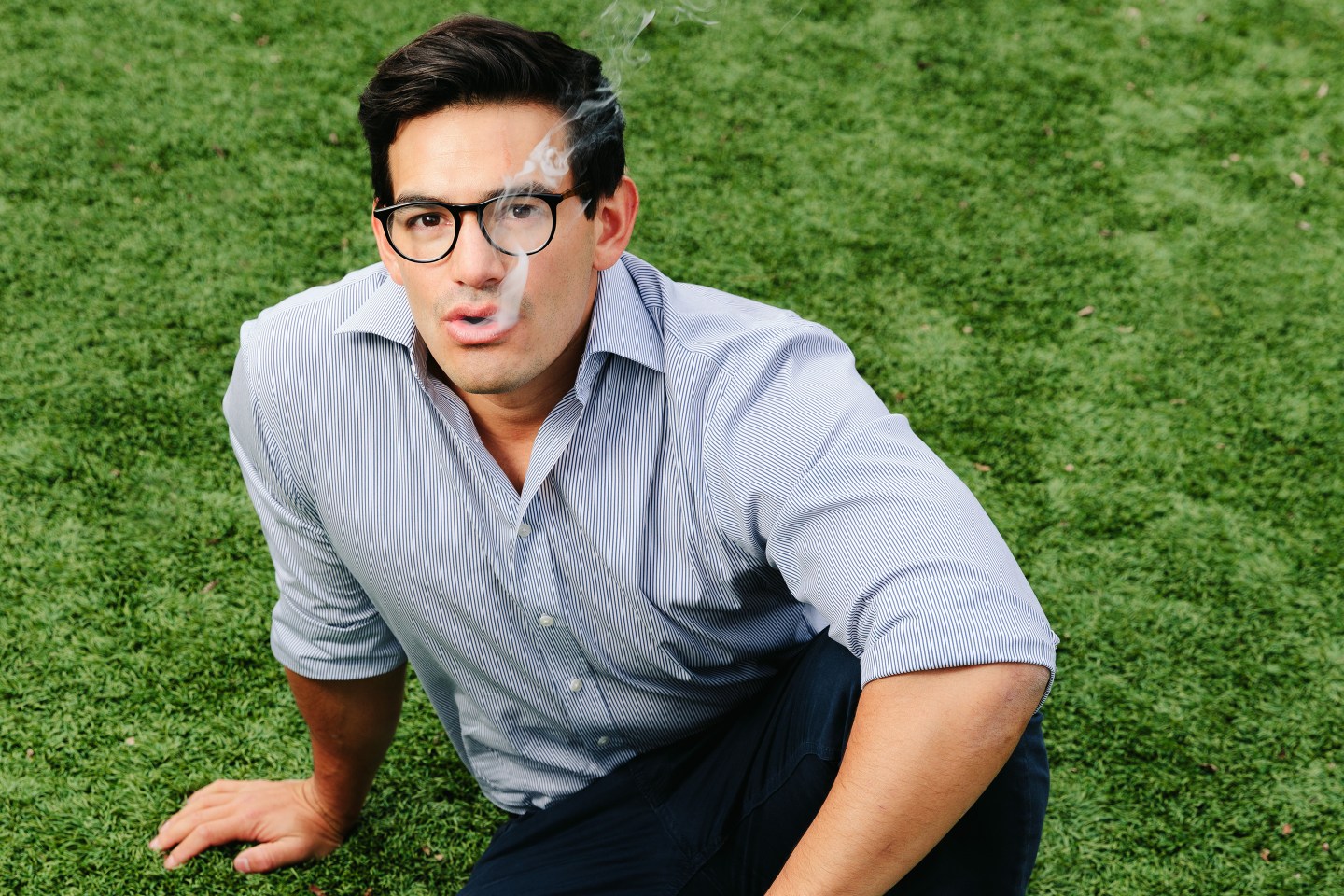 After a bacchana­lian banquet served on two thick planks at The Chase, a chandelier-filled rooftop Dorsia in downtown Toronto, the C-suite squad of Fyllo, a Chicago-based marijuana ad-tech startup, is on the restaurant’s patio for postprandial indulgences in booze and reefer madness.

Michael Chock, Fyllo’s chief ­operating officer, exhales after a particularly athletic puff of a weedy vape pen and takes in the scene. “What’s not to like about a day like today?” he says as smoke spills through his ear-to-ear grin. Fortune takes a puff—and nods.

The executives have come to MJBizCon, a banner international marijuana business conference, riding a company high: $16 million in seed funding from giants such as JW Asset Management and K2 Venture Capital, with another $2 million on the way. Their good fortune doesn’t stop there: Lorne Gertner of Hill & Gertner Capital, one of a few so-called godfathers of cannabis, has joined the board of directors. Partnership requests from Curaleaf, Fancy Weed, and A Proper High—“the Vanity Fair of weed reviews,” says Chock—await their attention. That afternoon, the executives take a meeting with Twitter—Katie Ford, Twitter’s head of global brands, is already on Fyllo’s board. Fyllo’s leadership team has managed to wow what’s known in marijuana investment circles as Toronto’s “Bay Street mafia.” Not bad for a Thursday.

The bulk of Fyllo’s appeal is an online platform called CannaBrain: a detailed compendium, zip code by zip code, of the fractured U.S. legal landscape that enables automated compliance and advertising. While breathless headlines huff and puff about legalization, investment, product development, and sales, Fyllo operates one step ahead: managing the tedious logistics of advertising, distribution, growth, labeling, licensure, marketing, and other unsexy minutiae of the cannabis business.

Imagine Fyllo as an early DoubleClick or PayPal of weed, assuming the role of a nascent tech’s proving ground (and reaping the benefits), hoping soon to be its standard-bearing bedrock foundation.

At a recent count, Fyllo reports 15 clients—everything from a multistate supplier of medical marijuana to an edibles boutique in Washington State. Although Fyllo declines to elaborate on its revenue, citing its fundraising push for $30 million by March, Chock says the company expects profitability in the second quarter of 2020.

Fyllo hopes to capitalize on the preference of Silicon Valley blue chips like Google and Facebook to buy success rather than build it. The startup also hopes to take advantage of the largely local cannabis industry’s bent toward word of mouth, physical billboards, and primitive email lists.

“Fyllo isn’t Google. Thank God. There’s a tendency of the smaller players to figure out the modeling, the infrastructure—to do the fucking heavy lifting—and deliver premium at scale,” says Ford. “Fyllo is offering the Good Housekeeping seal and mitigating risk once all the low-hanging fruit has been taken. They’re ready for 50 versions of the California Consumer Privacy Act. Who else can say that?”

In the throes of cultural and legal upheaval, the marijuana business is frenzied at best, chaotic at worst—trapped in a boom that banks won’t touch because it would risk their standing with the federal government, which considers cannabis a Schedule I drug on par with Ecstasy, heroin, LSD, and peyote. (The Drug Enforcement Agency considers cocaine, meth, and OxyContin, Schedule II drugs, to be safer.) Prestige employees now regularly indulge in marijuana—the FBI has struggled to find hackers and programmers who meet the government’s requisite three-year abstention from the drug (thanks, Burning Man). But it has also contributed to epic missteps by Elon Musk, who was fined $40 million by the SEC for making a 420 joke about Tesla stock prices on Twitter, and by former WeWork CEO Adam Neumann, whose reported use of marijuana on a private jet became part of the narrative of an unchecked leader.

Bringing order to the chaos is Fyllo. “Take out the CEO of Bank of America, and the machine goes on,” says Andrew Parks, CEO of Canadian banking services firm Fountain Asset Corp., who, as an investor himself, is also at the rooftop party. “Whatever happens in cannabis, these Fyllo guys are their own machine.”

Chad Bronstein, Fyllo’s CEO, is its de facto C-suite first among equals, given his penchant for having the others call him “daddy.” Chairman Brent Skoda brings business acumen he has refined since making day trades in fifth grade (by age 15, he was executing acquisitions at Merrill Lynch’s private client group). Chief of staff Aristotle Loumis’s Greek version of Warby Parker was acquired by businessman Marcus Lemonis. Chief marketing officer Conrad Lisco rallies them around the mantra “All in, all out, altogether.” And then there’s Chock, the steadiest of the bunch, who calls himself Vulcan as he texts meal pics to his personal trainer.

Thankfully the bro-y bluster is tempered by the cool grace of chief data and compliance officer Nicole Cosby, formerly SVP of media tech standards and partnerships at communications powerhouse Publicis, who holds court at the end of the banquet table at The Chase. “ ‘Crawl, walk, run’ is smart anytime,” she says. “But it’s perfect in an industry that’s just figuring itself out. We can set the day one standard.”

Marijuana-business dealers and their well-earned reputation for homespun crunchiness have never seen anything like it.

Clad in the only Gucci loafers in attendance at the conference, Chock is a whirlwind of handshakes. Told that Kim Campbell, Canada’s first female Prime Minister, is also at the conference, an attendee nods absentmindedly. “Yeah, yeah, yeah … Hey,” he adds, nodding toward Chock, “what’s the story with this guy?”

In May, Fyllo opened an office in Haifa, Israel, with four engineers (formerly of Intel and Microsoft) to develop image recognition, natural-language processing, machine learning, A.I., and full stack development.

A version of this article appears in the November 2019 issue of Fortune with the headline “Where There’s Smoke.”

Correction: An earlier version of this story said Brent Skoda was of accounting firm Skoda Minotti. The firm was founded by his father and he is not an employee.

—Obama worries that tech has led society astray
—Tesla could deliver ‘full self-driving’ within weeks. What that means for drivers—and Tesla’s stock
—The game industry is suffering from a battle royale ‘hangover’
—Most executives fear their companies will fail if they don’t adopt A.I.
—How giving thinkers and tinkerers room to experiment builds a better company
Catch up with Data Sheet, Fortune’s daily digest on the business of tech.