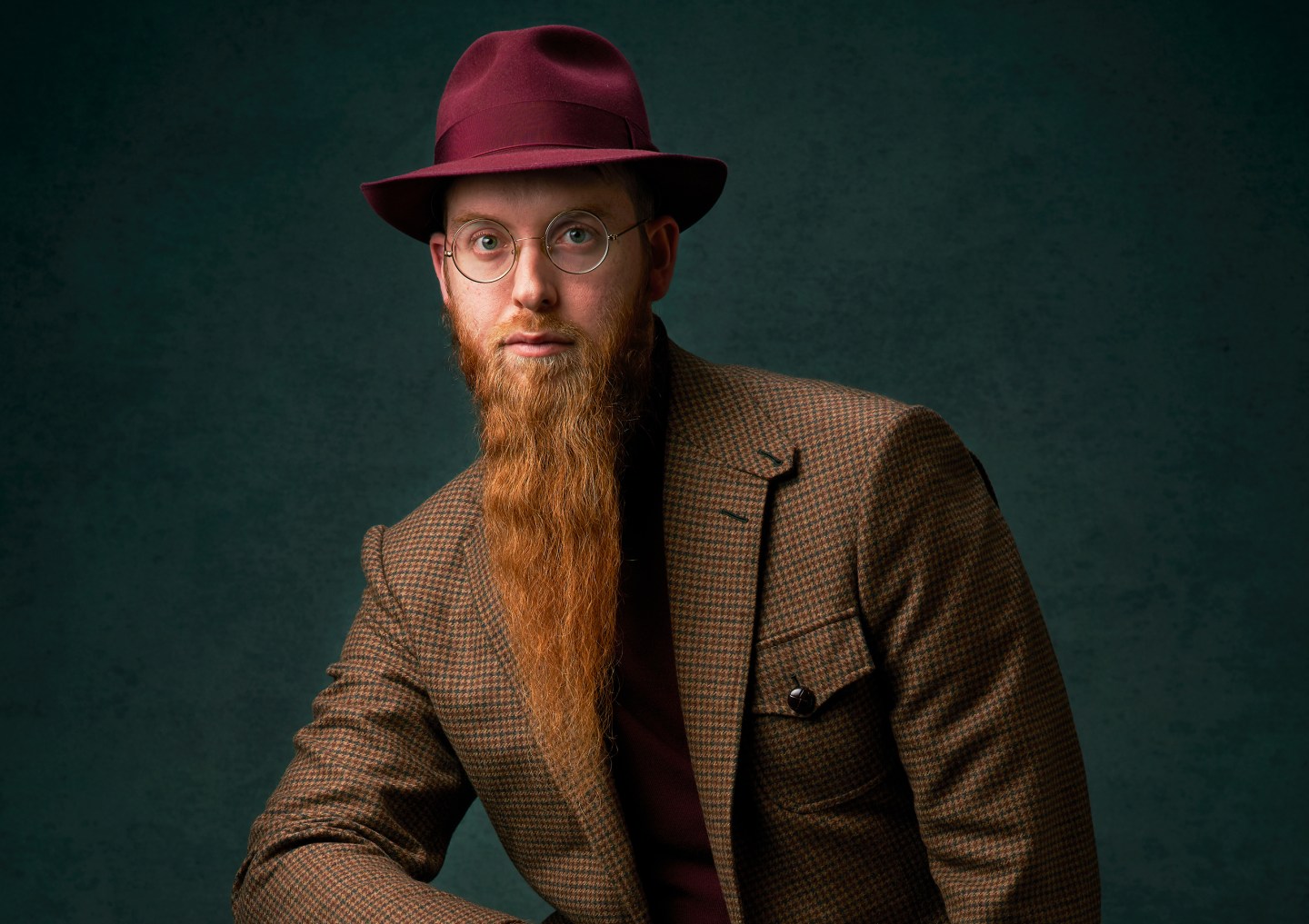 When searching for a great story, reporters tend to look for conflict. At first glance, the story of Yosel Tiefenbrun, an ordained Chabad rabbi and bespoke tailor based in Brooklyn, is all about conflict.

Upon reading what’s been written about him and meeting him in person, a struggle of opposites seems to define him: His perfectly built and eclectic outfit doesn’t match the traditional all-black worn by most Chassidics; his shapely red beard looks strikingly different from other rabbis’ facial hair. Even his tailoring studio is a display of oddness: In a desolate part of East Williamsburg, a red door opens into a giant, cold, empty warehouse with a set of stairs leading to a space that looks nothing like the downstairs. Tiefenbrun’s studio is warm and welcoming, with beautiful burgundy walls, chesterfield leather sofas, a three-way mirror, and jazz music playing softly in the background.

But it is while speaking with Tiefenbrun about his devotion to the craft of tailoring and his path toward success that one thing becomes strikingly clear: This is not a story about conflict but, rather, one of symmetry and balance. From the perfect symmetry of the suits he creates to his balanced comportment and, yes, even to his choice to become a full-time tailor while keeping his Judaism intact, Tiefenbrun’s life is the epitome of a balancing act.

Born in London to a religious Jewish family, the now 30-year-old Tiefenbrun always had an interest in fashion. “I loved my clothing, I took great care of it. I respected the clothes,” he says. “I was always pushing the boundaries in what I wore, throwing in some colors and the latest trend in shoes.”

The oldest of 10 kids, Tiefenbrun pursued his rabbinical studies all over the world—from France to Israel, New York, and Singapore—all the while aspiring to be a women’s wear designer. While in Singapore for the final portion of his rabbinical ordainment and working for the local Jewish community, he committed to kicking off his fashion career. “I had become a rabbi, and now I wanted to also pursue the art that was in me,” Tiefenbrun says. He tried his hand at interior design, “thinking it would be more appropriate for a rabbi than women’s fashion,” but eventually met an editor of the local Harper’s Bazaar at a bar mitzvah, who offered him an internship. “I did everything,” he says of his time at the magazine, including working on men’s photo shoots.

Tiefenbrun eventually moved back to London and began knocking on doors on Savile Row, the storied street that’s home to countless traditional bespoke tailoring shops for men, asking to be taken on as an apprentice. After a series of rejections, Tiefenbrun began working odd jobs to pay his way through Savile Row Bespoke Academy, a tailoring school founded by Andrew Ramroop, also the master tailor and director of Maurice Sedwell. While in school, Ramroop took him on as an apprentice. “It was a very interesting experience,” Tiefenbrun says. “He had been the first black tailor on Savile Row, so he saw me as a religious person with a yarmulke and thought that maybe I wouldn’t get an opportunity elsewhere. Whatever he saw in me, it was great.”

From the get-go, Tiefenbrun noticed similarities between his current tailoring apprenticeship and his becoming a rabbi. “[In both experiences], we would have the academic side and then the practical side,” he explains. “[While becoming a rabbi], we were involved with the community, we helped koshering kitchens. Same thing in the [tailoring] academy: I was learning how to cut and how to tailor and then preparing fittings.”

Although he concedes that his love for tailoring was born while on a quest to find a job in women’s fashion circles, Tiefenbrun never felt compelled to abandon his original dream. He just happened to find a slightly different one along the way. “I felt that if there’s a will, there’s a way,” Tiefenbrun says. Even today, heading his own studio alongside wife, Chaya, who handles the financial aspects of the business, Tiefenbrun doesn’t discard the possibility of working in women’s fashion within the scope of what’s religiously permissible. “I’d love to do women’s at some point,” he says. “But, again, it’s about figuring out how, and the right way to go about things.”

The tailor’s ability to address issues as they arise, all while exuding a sense of balance and calm also seeps into the way he deals with clients. When asked whether political talk ever enters the studio, Tiefenbrun answers: “One thing my grandfather told me was to just stay away from politics. We do follow the news at work [and], like in a classic tailor shop, people talk. But I have all sorts of clients [with] all sorts of political and religious views.”

Another possible conflict: Shatnez, the Jewish law that prohibits wearing clothes made with both wool and linen. “The law is that you’re not allowed to wear it, not that you’re not allowed to make it,” he explains. That being said, when dealing with Jewish clients, he uses cotton in place of linen in the collar—“[which] is the only place I really use linen [generally],” he says.

When pressed about the (seemingly) biggest conflict of them all, his religious family’s reaction to his artistic propensities, Tiefenbrun explains that he never found the two career paths to be mutually exclusive. “I wasn’t pushing off something,” he says. “I was going along with yeshiva, with the schooling, I was quite passionate about it. I wasn’t a rebel in a way that I wanted to do this and not that. I wanted to make it happen in a respectful manner. My relationship with my parents was always great.”

More than anything, Tiefenbrun wants to make clear that establishing a bespoke tailoring business didn’t interfere with the development of his rabbinical mind. “Being a rabbi is more than leading a congregation,” he explains. “I’m a rabbi, and it’s a way of life that I haven’t given up on. It’s something that is always a part of me, it’s in my blood. Both things are in my blood. There’s no giving up on something if it’s done right.”