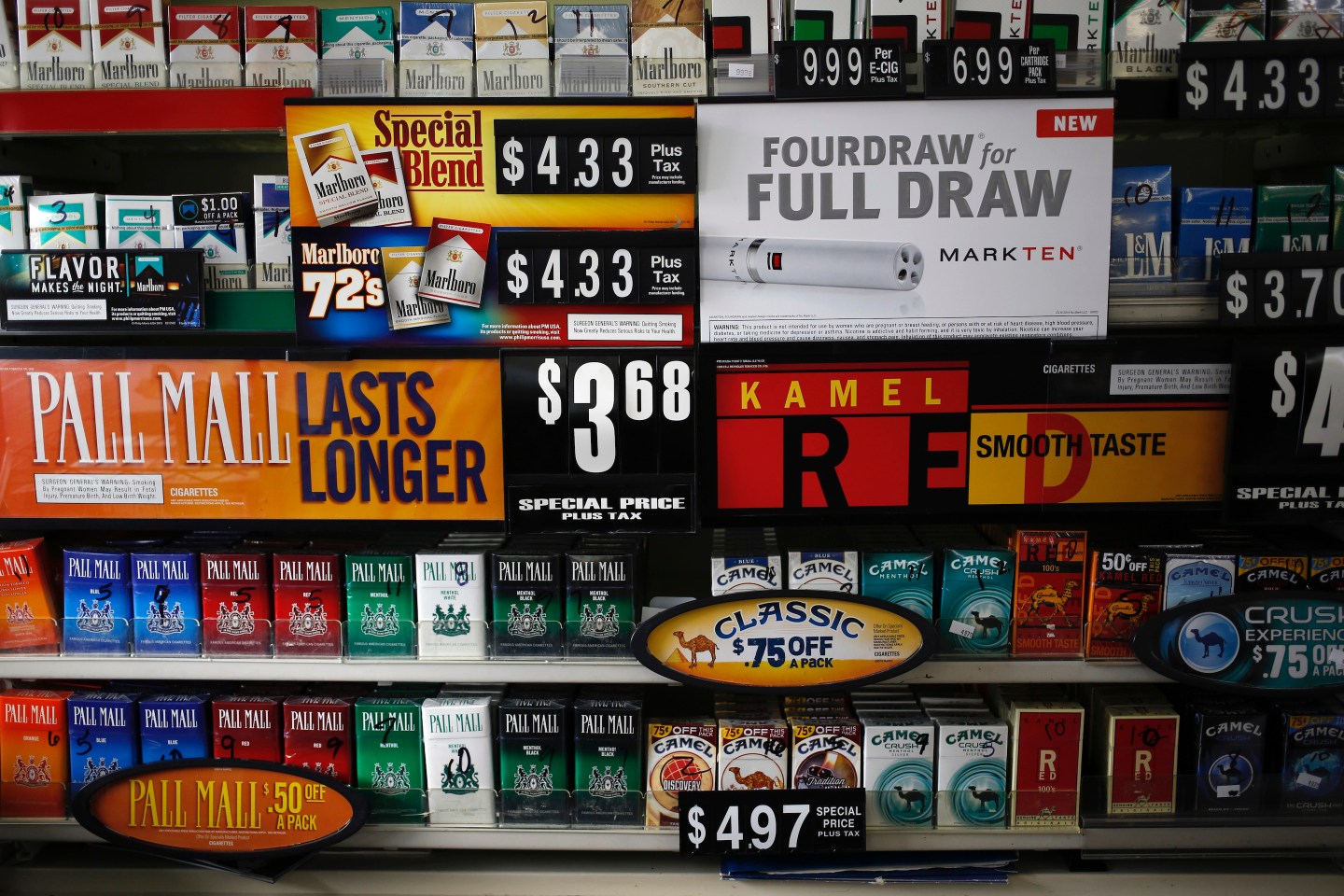 U.S. regulators are hitting the brakes on plans to force tobacco companies to drastically reduce addictive nicotine in cigarettes, retreating on an ambitious public-health initiative, which comes amid increased concerns about nicotine use among young people.

The Department of Health and Human Services has dropped a proposal unveiled two years ago to cut the level of nicotine in cigarettes to non-addictive levels, according to a regulatory document published on Wednesday.

Abandoning the plan, which almost certainly would have meant a sharp reduction in tobacco sales, would be a major victory for the tobacco industry. The move also comes at a time when public debate is focused on the potential for e-cigarettes to create a new generation of nicotine addicts.

Representatives for the Food and Drug Administration and the Department of Health and Human Services didn’t immediately respond to requests for comment. Shares of Altria Group Inc., the maker of Marlboro cigarettes, rose 3.1% at 12:55 p.m. in New York. Philip Morris International Inc. rose 1%.

In a notice posted on a government website earlier this year as part of the Food and Drug Administration’s near-term regulatory goals, the agency said the policy “would have significant public health benefits for youth, young adults, and adults, as well as potentially vast economic benefits.”

That goal, once included as part of the “unified agenda” of regulations the government is working on, is no longer listed on the website, which was updated Wednesday as part of a semiannual review.

FDA spokesman Michael Felberbaum said that the removal of the plans “does not mean the agency does not consider them a priority or will not continue to work on their development.”

“The agency has focused on regulations that reflect its most immediate priorities,” Felberbaum said in an email. “FDA continues to gather evidence and data on an ongoing basis regarding all tobacco products.”

In 2017, then-FDA Commissioner Scott Gottlieb said he wanted to reduce nicotine levels in cigarettes and other burnt tobacco to near-zero. Almost half a million people in the U.S. die each year from tobacco-related causes, according to the Centers for Disease Control and Prevention, and the move was hailed at the time as a potentially monumental public-health decision.

It also shocked Wall Street, sending stocks of tobacco giants including Altria plunging as investors reconsidered whether people would bother smoking a cigarette without the addictive chemical. The move was paired with a decision—later reversed—to give e-cigarette makers extra time to keep their products on the market without regulation.

Gottlieb left the FDA before the nicotine policy could be seen through. Altria later bought a $12.8 billion stake in e-cigarette market leader Juul Labs Inc., a hedge against declining smoking rates.

“The effort to lower nicotine in cigarettes is a central part of our effort to reduce death and disease from tobacco,” Gottlieb said in response to a request for comment from Bloomberg. “It’s critical we all maintain our commitment to these public health goals.”

Another former FDA commissioner, Robert Califf, said on Twitter the change marked “a sad day for future grandchildren. They will have fewer grandparents because of this.”

The update to the U.S. regulatory agenda was published on the same morning a Senate panel was considering the nomination of Texas oncologist Stephen Hahn to be the new head of the FDA. At that hearing, Hahn was peppered with questions about the agency’s approach to the e-cigarette industry. This year, government data has shown a surge in use of e-cigarettes by teens, and thousands of Americans have suffered serious lung injuries after vaping.

The Trump administration had vowed tough curbs on flavored vaping products in September. Since then, however, the president has signaled any effort to clear the market of flavored products that appeal to young people is on hold.

The FDA’s oversight of the tobacco industry was the product of a pitched political battle that began in the 1990s and culminated in a 2009 law giving the agency oversight of cigarettes and other smokeless products.

Recently, some administration officials have questioned the FDA’s role in regulating tobacco. Joe Grogan, the head of the White House Domestic Policy Council, earlier this month called the FDA’s regulation of tobacco “a huge waste of time” and said the agency should focus on pharmaceuticals.

—Republicans keep attacking impeachment witnesses, rather than defending Trump’s call
—Bernie Sanders dominates in donations from suburban women
—2020 candidate Tom Steyer is a billionaire, but not that kind of billionaire
—The 2020 tax brackets are out. Here’s what you need to know
—More companies are openly supporting abortion rightsGet up to speed on your morning commute with Fortune’s CEO Daily newsletter.