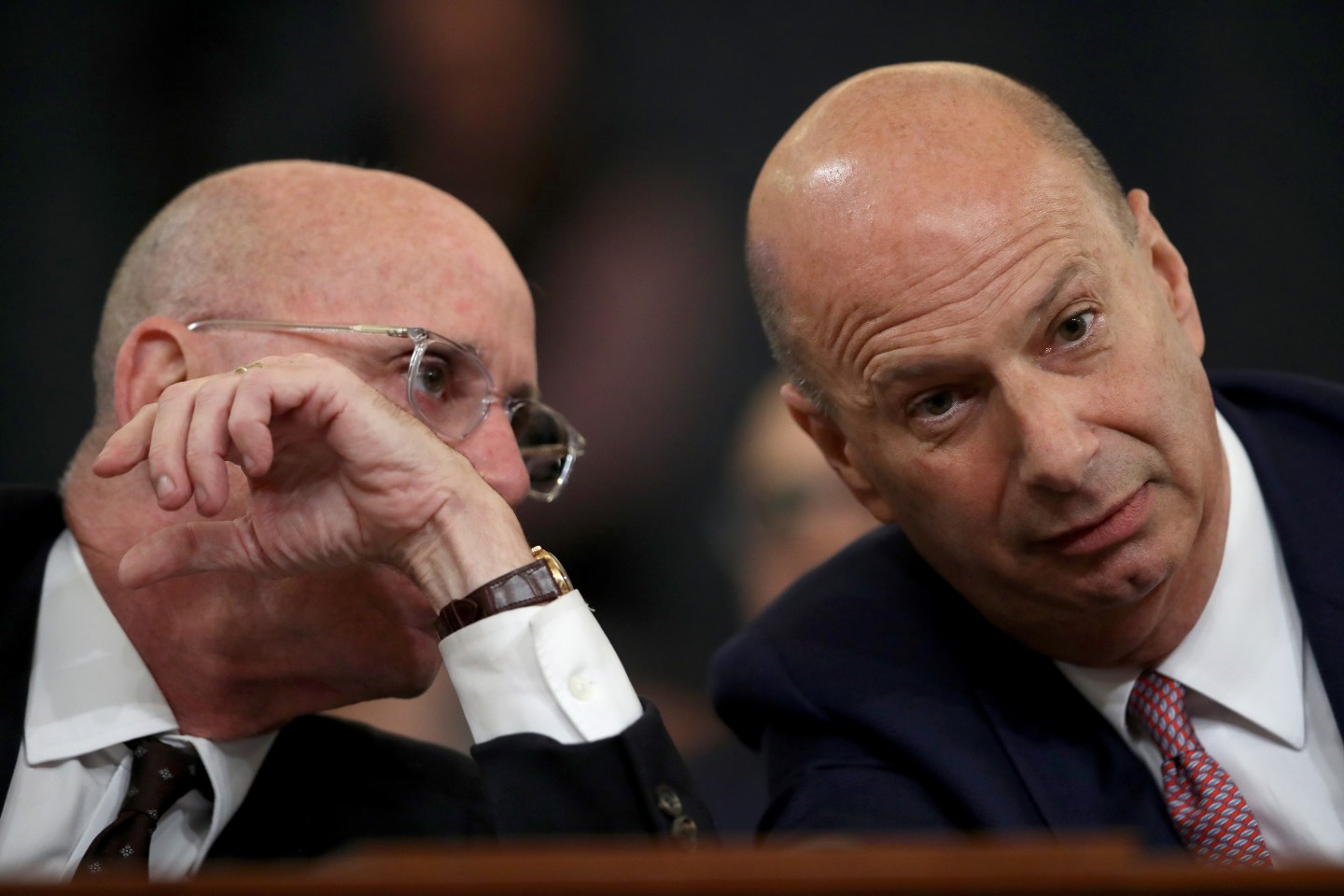 Gordon Sondland (R), the U.S ambassador to the European Union, testifies before the House Intelligence Committee in the Longworth House Office Building on Capitol Hill November 20, 2019 in Washington, DC. The committee heard testimony during the fourth day of open hearings in the impeachment inquiry against U.S. President Donald Trump, whom House Democrats say held back U.S. military aid for Ukraine while demanding it investigate his political rivals. Drew Angerer—Getty Images
Drew Angerer—Getty Images

Ambassador to the European Union Gordon Sondland rocked the impeachment inquiry against President Donald Trump Wednesday with a charge that he worked with the president’s personal lawyer, Rudy Giuliani, “at the express direction of the president” on a pressure campaign against Ukraine.

Sondland confirmed that there was a “quid pro quo” between a White House visit for Ukrainian President Volodymyr Zelensky and his announcing of investigations into Trump’s potential 2020 political rival, Joe Biden.

Despite the explosiveness of the testimony, on Capitol Hill, the new evidence changed few, if any, minds.

In public hearings, House Democrats have secured multiple pieces of evidence establishing the facts of the pressure campaign, while Republicans have not budged in their defense of the president and attacked the credibility of witnesses. Sondland’s appearance did not fundamentally change that dynamic.

To Democrats investigating the inquiry, his testimony was some of their most significant evidence to date.

“This was a basic quid pro quo,” House Intelligence Committee Chairman Adam Schiff (D-Calif.) told reporters. “It goes right to the heart of the issue of bribery.”

Still, House Republicans continued to defend the president. They said that Sondland was simply presuming that Trump was holding up military aid until Ukraine announced investigations against his Biden. Sondland further testified that he thought Giuliani, whom he worked with on the pressure campaign, spoke for the president.

Many GOP members hinged their defense on a line from Sondland in which he said, “I never heard from President Trump that aid was conditioned on an announcement of investigations.” However, Sondland, a major Trump donor, said that by September 8, “it was abundantly clear to everyone that there was a link.” (The aid was ultimately released on September 11.)

Schiff responded to this line of defense by saying that it meant the standard was: Unless Trump said, “I am bribing the Ukrainian president,” to Sondland, then no crime was committed.

“If they’re going to hang their hat on the defense that the president did not say, ‘I hereby bribe Ukrainians,’ that’s a tough defense,” Krishnamoorthi told Fortune.

But it was one that Republicans were making. House Republicans defended Trump by quoting the president’s statement relayed by Sondland that there was no “quid pro quo,” which was dated to September 9, the same day the House intelligence Committee learned of the anonymous whistleblower complaint at the heart of the inquiry.

“The truth is there was no quid pro quo,” Rep. Jim Jordan (R-Ohio) told reporters. “End of story.”

Sondland also tied multiple Trump administration officials to the Ukraine scheme, saying that “everyone was in the loop,” including top officials who have refused to testify, such as Energy Secretary Rick Perry and Office of Management and Budget Director and Acting Chief of Staff Mick Mulvaney, as well as Vice President Mike Pence and Secretary of State Mike Pompeo, who has directed State officials not to testify before the impeachment inquiry.

“Knowledge of this scheme was pervasive,” said Schiff. “The veneer has been torn away.”

Sondland gave perhaps the clearest evidence of the pressure campaign to date.

“Was there a ‘quid pro quo?'” Sondland said in his opening statement. “With regard to the requested White House call and White House meeting, the answer is ‘yes.'” He further testified that releasing $391 million in security assistance was part of the quid pro quo with Zelensky announcing investigations into the Bidens.

And Democrats were gleeful that a person with a close relationship to Trump testified in the greatest detail against him. “It was extremely important because Ambassador Sondland made it clear that he has a good relationship with the president; the president answers his phone calls,” Rep. Val Demings (D-Fla.) told reporters.

While the partisan lines remained clear, one Republican, Rep. Francis Rooney (R-Fla.), who has not fully ruled out voting for impeachment, was still keeping his options open. “There’s a lot out there to still digest, and I just want to digest it all and do the right thing,” he told reporters. “I don’t think anybody doubts he [Trump] was threatening the Ukraine…and it’s not a good thing.”

Still, the dynamic of no Republicans supporting impeachment—and almost all Democrats supporting it—remained unchanged. Retiring Rep. Peter King (R-N.Y.) doubted that the open hearings had changed any minds. “The people who hate Trump still say he should be impeached, and the others say, ‘when are you going to end it,'” he told reporters. “I think it’s a stalemate.”

—Bernie Sanders dominates in donations from suburban women
—Are white Democrats turning on presidential candidates due to Latino outreach?
—2020 candidate Tom Steyer is a billionaire, but not that kind of billionaire
—The 2020 tax brackets are out. Here’s what you need to know
—More companies are openly supporting abortion rights
Get up to speed on your morning commute with Fortune’s CEO Daily newsletter.