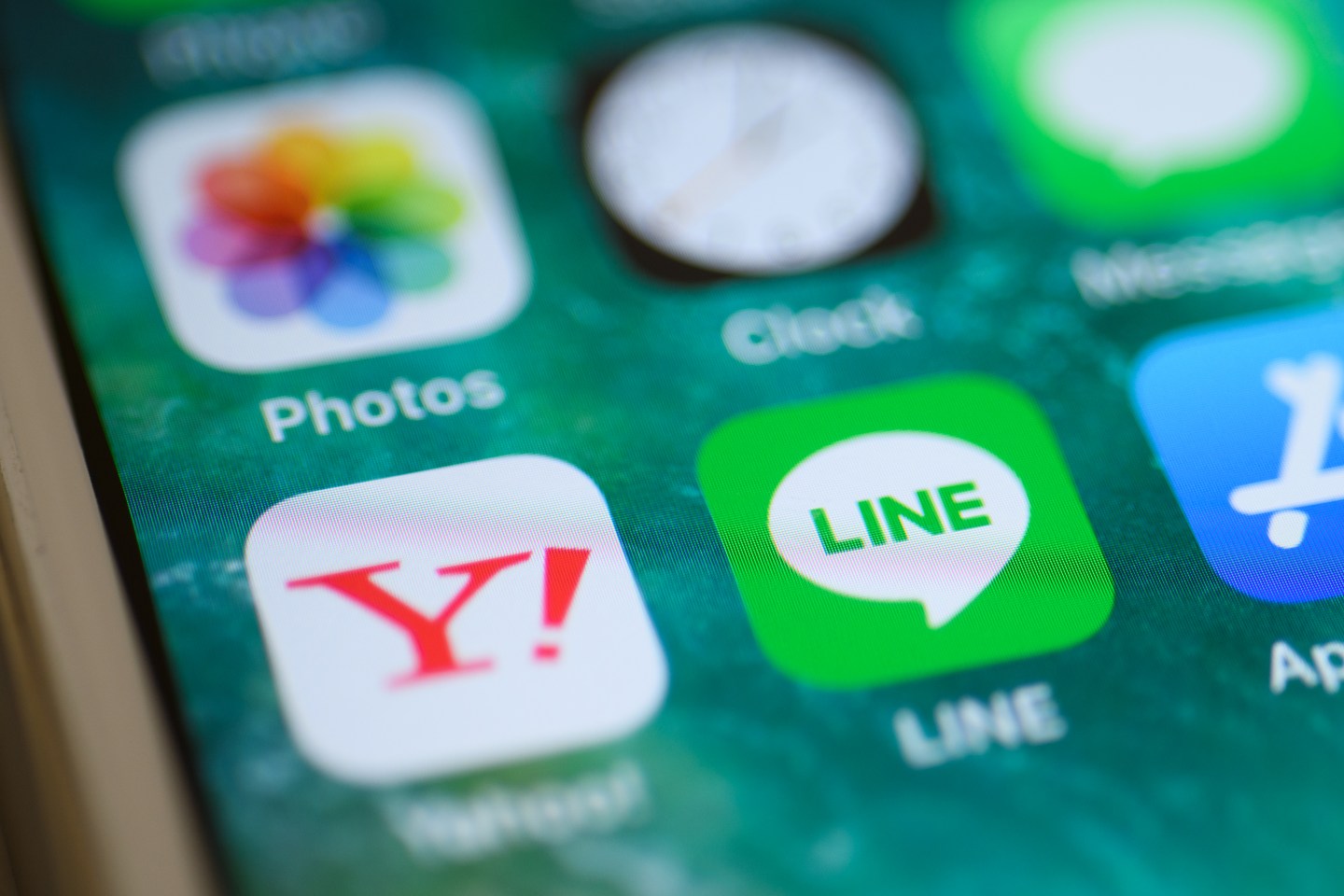 The icons for Z Holdings Corp. Yahoo Japan application, front row from left, and the Line Corp. Line application are displayed on a smartphone in this arranged photograph taken in Kawasaki, Kanagawa Prefecture, Japan, on Thursday, Nov. 14, 2019. Z Holdings, a unit of SoftBank Group Corp.s telecom arm formerly known as Yahoo Japan, confirmed that its in talks with Tokyo-based messaging service Line about a possible merger, but said no final decision on a deal had been made. Photographer: Akio Kon/Bloomberg via Getty Images
Akio Kon—Bloomberg via Getty Images

Masayoshi Son, after backing startups around the world, is engineering a complex deal on his home turf to create a national champion that can more effectively compete with global rivals like Google and Amazon.com Inc.

Son’s SoftBank Group Corp. plans to combine its Yahoo Japan internet business with Line Corp. in a deal that values the messaging service at $11.5 billion. SoftBank and South Korea’s Naver Corp. will take Line private and then fold Line and Yahoo Japan into a new joint venture. The deal requires shareholder approvals and is scheduled to close by October 2020.

The two companies said the combination is driven by a sense of crisis that global giants are increasing their grip on the technology industry and countries like Japan risk falling behind. Together, Line and Yahoo Japan, which now operates as Z Holdings Corp., will be able to share engineering resources, access broader sets of data and invest more in areas like artificial intelligence, the chief executive officers said in a Tokyo press conference.

“The internet industry often operates on the winner-takes-all principle and the strong only get stronger,” said Line co-CEO Takeshi Idezawa. “Even combined, our market capital, business scale and R&D expenditures are dwarfed by the global tech giants.”

At the event, the CEOs gave unusual emphasis to their corporate vulnerabilities and the incumbent risks for Japanese consumers, perhaps in an attempt to preempt government scrutiny of a deal that will combine two of the country’s largest internet companies. The chiefs said they need to join forces to mount a serious challenge to much larger rivals from the U.S. and China.

Under the proposed transaction, Z Holdings and Naver will buy out Line’s public shareholders in a tender offer at a projected 5,200 yen per share, a 13% premium to Line’s share price before news of the talks. Each company plans to spend 170 billion yen ($1.56 billion) on the bid. Naver already owns 73% of Line, while SoftBank Corp., the domestic telecom arm of Son’s business empire, holds a roughly 44% stake in Z Holdings.

The companies have been in talks about a possible alliance since June and settled on the idea of a merger in August, according to the statement. After taking Line private, SoftBank and Naver will undertake a reorganization that will eventually result in a 50-50 ownership of the new company. The combined entity will hold stock in Z Holdings, which will remain public with Yahoo Japan and Line as wholly-owned subsidiaries.

SoftBank and Line have increasingly competed in fields such as digital payments, and an alliance may allow them to save money on expenses like subsidies. Both companies have also been investing in artificial intelligence to improve their services. While the announcement didn’t say how the mobile payment rivalry will be resolved, it said the resulting company aims to spend 100 billion yen annually on development of AI-powered products.

“Big data is key for the future of both companies,” said Koji Hirai, the head of M&A advisory firm Kachitas Corp. “The merger will enable them to create a massive repository of client data.”

Idezawa and Kawabe said there are potential synergies in a number of services areas spanning media content, fintech, advertising, communications and commerce, but didn’t give further details. The combined company will also have about 20,000 employees, a major benefit in an industry where competition for talent intensifies year after year, they said.

Steps to the planned merger:

Silicon Valley giants like Google, Amazon and Facebook Inc. and Chinese startups have taken the lead in both pushing AI development and turning the research into commercial products. That has left most other companies scrambling to attract scarce talent and collect the data necessary to conduct research in fields like deep learning.

Line and Yahoo Japan are betting they can leverage local knowledge to stay in the race in their home country and markets where their services are popular, including South Korea, Taiwan, Thailand and Indonesia. Line and Z Holdings shares rose on the deal.

Yahoo Japan was once the country’s leading search engine, web portal and major e-commerce player, but has lost ground as users migrated from PCs to smartphones. The company’s online shopping offering has been squeezed by Amazon and Rakuten Inc., while smartphone-native newcomer Mercari Inc. lured customers from its auction service. Yahoo Japan counts some 48 million daily active users across its portfolio of more than 100 mobile phone apps.

Line’s origins date back to the turn of the century, when Naver dispatched Shin Jung-ho to Japan to promote its search engine technology. Shin led the company through its first decade in relative obscurity, distributing online games and dabbling in social networking services. In 2010, Line acquired Livedoor Inc., a once high-flying Japanese web portal that had fallen on hard times after its founder was thrown in jail for accounting fraud. It launched Japan’s dominant messaging service in 2011 and went public in 2016.

Shin, who shares the CEO title with Takeshi Idezawa at Line, will become the newly created entity’s chief product officer. The post will give him control over the 100 billion yen AI budget and oversight of service development for both Line and Yahoo Japan.

Line has 82 million monthly active users in Japan and is also the dominant messenger in Taiwan and Thailand, where it has 21 million and 45 million customers respectively. The company has been expanding into financial services by partnering with Nomura Holdings Inc. and Mizuho Financial Group Inc. It has also been developing a lineup of AI-powered hardware products, including speakers and earphones. Outlays on the new businesses have led to losses in four out of five past quarters.

In the Tokyo press conference, the CEOs repeatedly spoke about getting outgunned by GAFA, or Google, Amazon, Facebook and Apple Inc. They said they wouldn’t want see Japan lose out on world-leading services like search and e-commerce, but they want to create a local alternative that can address domestic needs and tastes.

“GAFA’s biggest threat is the kind of loyalty they command from their users,” said Kawabe. “We want to give users a domestic AI option. By focusing on Japan’s unique challenges, we can offer services others cannot.”