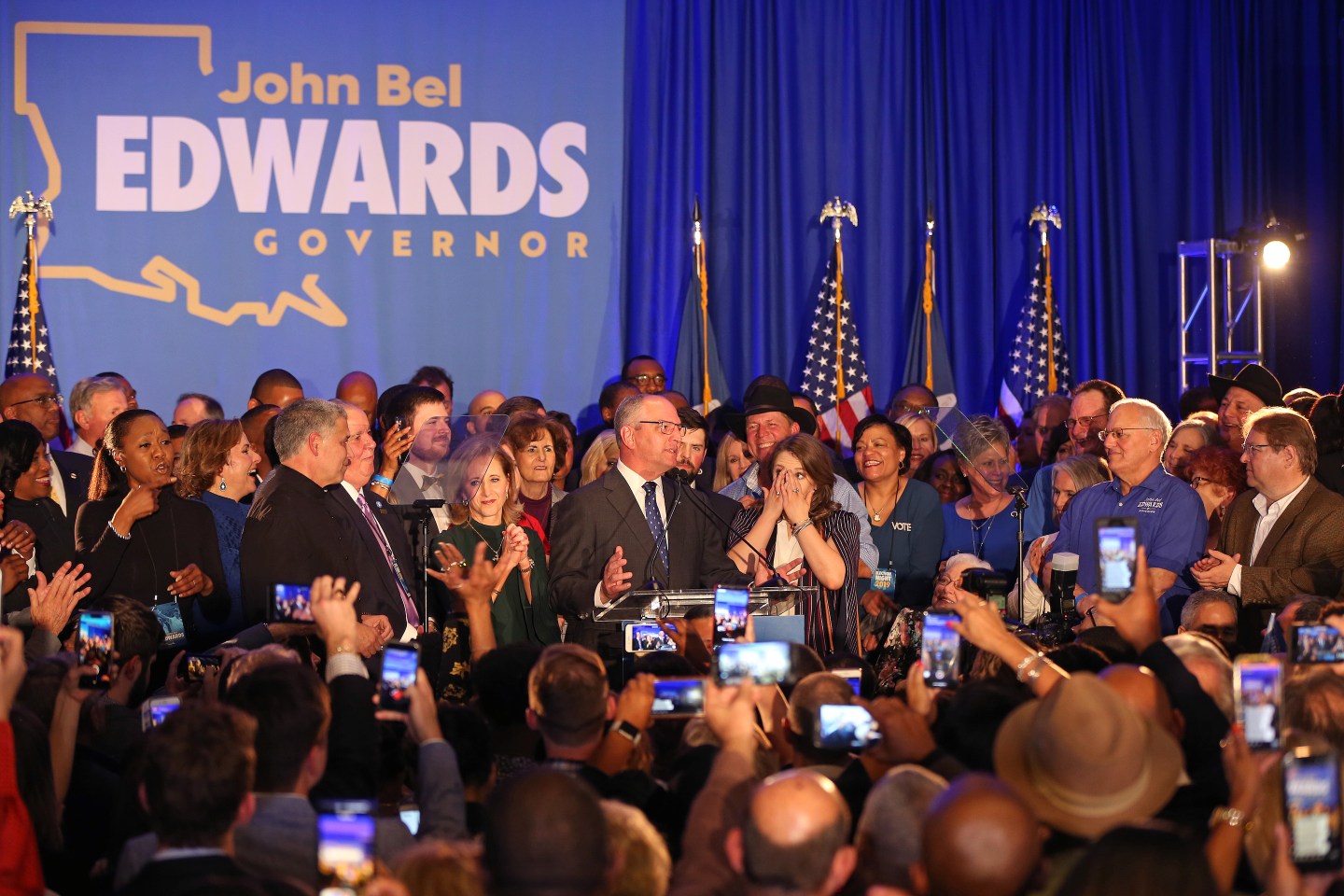 The re-election victory by Louisiana Gov. John Bel Edwards over the weekend has assured Democrats of an all-important place at the table when political maps are redrawn after the 2020 census for future elections to Congress and the state Legislature.

Edwards’ narrow triumph on Saturday marked the third significant win in a Southern state in two weeks for Democrats, following their takeover of both legislative houses in Virginia and the defeat in Kentucky of Republican Gov. Matt Bevin by Democratic Attorney General Andy Beshear.

The recent Southern state elections provided a preview of the battle over redistricting power that is to come next year in many states. Although about one-quarter of the states use independent commissions or nonpartisan staff in their redistricting procedures, state lawmakers, governors, and other elected officials have key roles in redistricting in most other states.

If one party controls all pivotal state offices, that party can draw districts to the advantage of its candidates a practice known as gerrymandering that can help lock in a party’s political power for the next decade to come.

In Louisiana, Republicans, who already controlled the state House and Senate, had hoped to consolidate power by defeating Edwards, or else obtain a two-thirds majority in both legislative chambers that would allow them to override his vetoes. Neither occurred.

In Kentucky, Beshear’s election also will give the veto pen to a Democrat when the state Legislature draws new districts. The Kentucky House and Senate currently are controlled by Republicans, who are expected to maintain their majorities in next year’s state legislative elections.

Beshear’s veto power is not as strong as that held by Edwards in Louisiana, because the Kentucky Constitution requires only a basic majority vote by each legislative chamber to override a veto. Any redistricting plan passed by Kentucky lawmakers would be defended in court by newly elected Attorney General Daniel Cameron, the first Republican to hold the office in 70 years.

Yet Beshear still will have the gubernatorial bully pulpit during redistricting, just as Maryland’s Republican Gov. Larry Hogan will against a legislative body with Democratic supermajorities.

“If Governor-elect Beshear makes an issue of it, it could potentially force them to draw a fairer map than otherwise they might have,” said Patrick Rodenbush, communications director for the National Democratic Redistricting Committee.

Elections this month in another Southern state played out as expected in favor of Republicans, when they held on to the governor’s office and both legislative chambers in Mississippi.

Following the 2010 census, Republicans who had swept to power in many statehouses used their newfound majorities to draw districts that increased their odds of winning future elections. Democrats had done the same thing historically when they had power.

But a backlash has grown against such gerrymandering over the past decade. In 2018, voters in Colorado, Michigan, Missouri, Ohio, and Utah approved ballot measures designed to diminish legislative partisanship in redistrictin—in some cases, by giving power to independent commissions.

Activists are backing a new batch of potential redistricting initiatives for the 2020 ballot in Arkansas, Nevada, Oklahoma, and Oregon.

In Virginia, congressional and state legislative districts have been drawn by lawmakers, subject to a gubernatorial veto.

But earlier this year, Virginia lawmakers overwhelmingly gave initial approval to a proposed constitutional amendment to create a redistricting commission with 16 members split equally between lawmakers and citizens, with no role for the governor. At the time that vote was taken, Republicans held a slim majority over Democrats in both legislative chambers.

A second vote on the amendment will be required in early 2020 to place it on the November 2020 ballot. This time, Democrats control both chambers.

Democrats could renege on the plan and try to keep the redistricting powers for themselves, but that would risk alienating voters and could backfire in the long run, said John McGlennon, a professor of government and public policy at the College of William & Mary in Virginia.

“The Democrats need to keep one thing in mind, which is that the political alignment of the state changed very quickly, and it can reverse quickly,” McGlennon said.

—Why Trump is bad for business.— Bernie Sanders dominates in donations from suburban women
—Trump wants to ban flavored vape products. Why not menthol cigarettes, too?
—The 2020 tax brackets are out. Here’s what you need to know
—More companies are openly supporting abortion rightsGet up to speed on your morning commute with Fortune’s CEO Daily newsletter.