Will the Kentucky Governor’s Race Be a Harbinger of the 2020 Presidential Election? 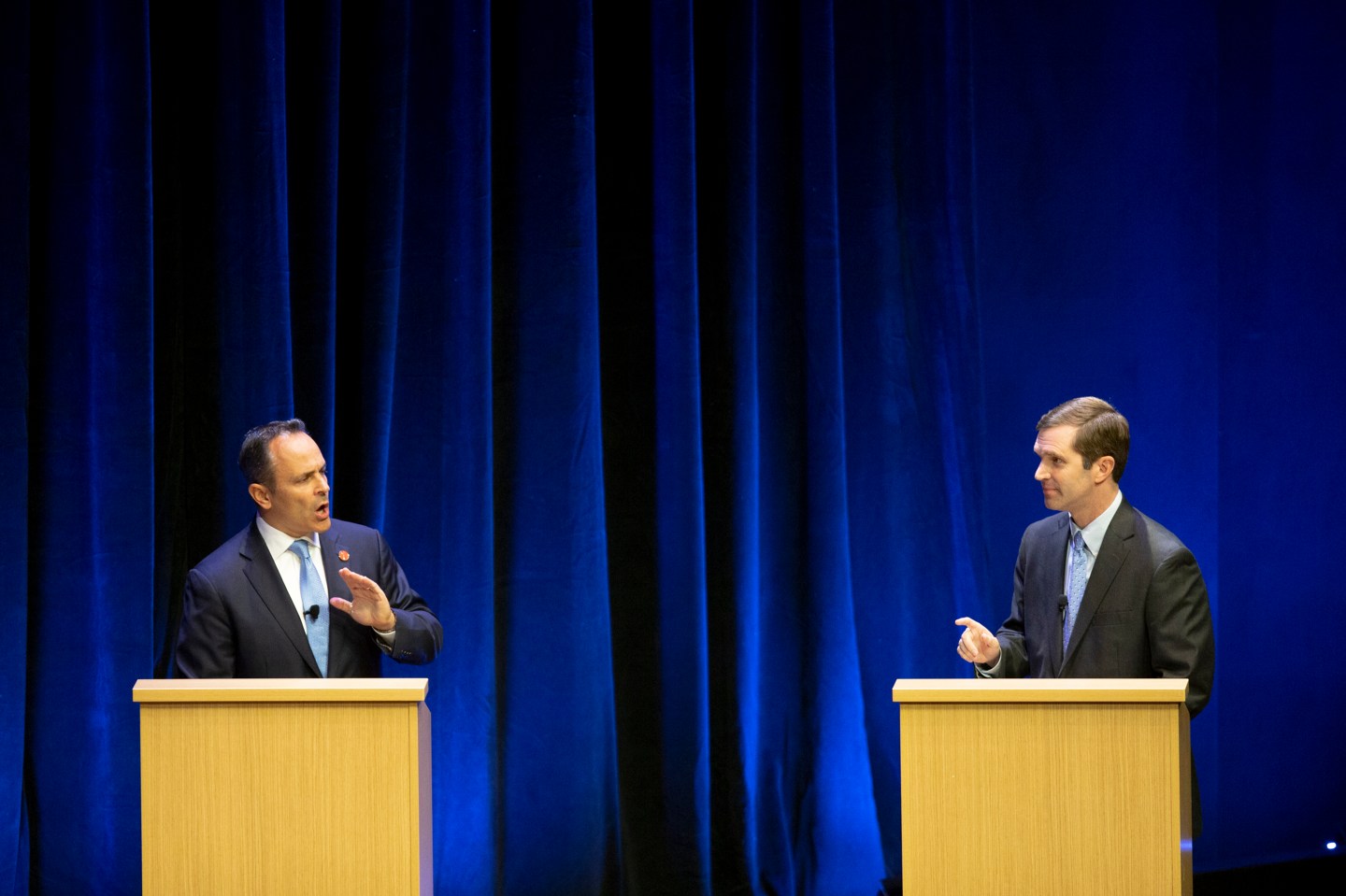 With all eyes on the 2020 campaign, you could be forgiven if you didn’t know that there were a few competitive elections set to be held this November.

But there are a few—and arguably the main event will take place in Kentucky, where Democrats have eagerly eyed an opportunity to oust a red state Republican governor, Matt Bevin, following on gains Democrats made in 2018, when the party won a House of Representative majority in part by making gains in seats traditionally held by Republicans.

As the race comes down the stretch, however, the trends that appear to be shaping it are different from 2018 and could be a preview of coming attractions as to how next year’s presidential election will unfold.

Bevin, the incumbent, has been a controversial figure in Kentucky politics since 2014, when he ran an ultimately fruitless primary challenge against Senate Majority Leader Mitch McConnell.

The following year, he ran for governor, squeaking out a win in the hotly contested Republican primary by a scant 83 votes. Though he won the general election handily, he has never been a beloved governor—in fact, in June, he was ranked the least popular governor in the country.

Among Tea Party Republicans, Bevin has some unsurprising positions, but he also dabbles with fringe issues. He is a staunch critic of Obamacare, even though Kentucky is one of the few red states that expanded Medicaid under the Affordable Care Act. He has also spoken critically of gay marriage and immigration, and he vowed to bar Syrian refugees from the state.

In 2016, and again in 2017, Bevin declared that it was the “Year of the Bible” in the Bluegrass State. He infamously once attended a pro-cockfighting rally. In May, he survived a too-close-for-comfort primary challenge, garnering barely 50% of the vote.

With Bevin struggling to maintain support among Kentucky’s conservative voters, his Democratic rival—Attorney General Andy Beshear—has run an aggressive campaign to unseat him.

Beshear and Bevin have long had an adversarial relationship; Beshear’s father served as the state’s governor immediately prior to Bevin, and there’s no love lost between them.

As attorney general, Beshear has frequently sued the Bevin administration over matters related to the limits of executive powers, most notably the governor’s efforts to make unilateral budget cuts midway through a budgeting cycle, in defiance of the state legislature.

“Under his view, a budget is merely a suggestion and the legislature is merely an advisory body,” Beshear said at the time.

“We strongly disagree with the attorney general and will respond as necessary in court,” a spokesperson for the governor fired back. “Given the amount of alleged corruption and personnel problems in the office of attorney general and his father’s administration, it is clear that he is attempting to deflect attention away from his own challenges.”

Beshear won that round, and perhaps saw it as a springboard to winning the governor’s mansion. In criticizing his opponent’s pugilistic style, Beshear has called for restoring diginity and transparency to the governor’s office. But beyond that, his campaign has primarily focused on local issues, like pay raises for teachers (with whom Bevin has had an especially acrimonious relationship) and legalized casino gambling.

And for a time, it seemed as if Beshear would edge out Bevin; the Democrat was running 9 points ahead of the Republican as recently as August.

Lately, however, Bevin has landed on a campaign strategy that has turned the momentum in his favor, and that’s to nationalize the race by making a full-throated embrace of President Donald Trump.

In particular, he has reframed the race as a proxy for the House’s percolating impeachment inquiry; a win for Bevin is a win for Trump, he has asserted. This week, he gave a whole press conference standing next to a poster board with the word “Impeachment” on it.

In return, the president has embraced Bevin’s reelection. Last week, he tweeted his endorsement:

Taking another page from the Trump playbook, Bevin has also gleefully attacked the press. After this week’s gubernatorial debate, he responded to reporters’ questions by saying: “[F]or the next four years, you’re gonna realize that things are shifting, and you can either come along board and actually report on the news, or you can continue to try to twist and fabricate.”

As the race moves into its final weeks, Bevin’s new strategy seems to be working. The two candidates are now tied in the polls, which represents a strong rebound for the governor. Faced with a choice between turning the page and digging in, it appears as if a large number of Republican voters in the state are ready to start digging.

Some of the same partisan elements may be at play in Louisiana, one of the few other states with a major election, where Gov. John Bel Edwards, a Democrat, faces a runoff after failing to secure 50% of the vote in a first-round election that featured six candidates. Trump has encouraged the state’s voters to drop the only Democratic governor in the deep south.

Republicans in Washington, whose faith in the White House’s political instincts have been shaken this week, will no doubt watch the results of the election in Kentucky very carefully. McConnell, for one, will be on the ballot next year, and he surely sees the power of running against impeachment in his home state.

For Democrats, the bind is apparent enough: Even as polls show that 52% of Americans support impeaching the president and removing him from office, there are plenty of voters—especially in states like Kentucky and Louisiana—who will view efforts to hold Trump to account as a provocation.

Already, Republicans are reporting that a large number of first-time candidates are planning to run for office because they are motivated to campaign against impeachment.

It’s not surprising that we’re seeing a backlash to the backlash, of course. But the warp of the Trump era is that the president is somehow simultaneously really unpopular with many people and also really popular with enough voters to make it work for him.

As impeachment unfolds, struggling candidates down ballot will have to choose whether to stick with Trump, or risk the wrath of his stalwart supporters. If Bevin ekes out a win in Kentucky, you can bet other candidates will adopt his playbook in the campaign ahead.

—A running list of questions on the impeachment inquiry, answered
—Trump impeachment inquiry: Who has been subpoenaed—and why
—5 lessons history has taught us about impeachment
—Most Americans favor an impeachment inquiry—but are wary of removing Trump, polls find
—How whistleblowers have taken down titans of American business
Follow Fortune on Flipboard to stay up-to-date on the latest news and analysis.