What’s Saudi Aramco Worth? Investors Could Find Out This Weekend Ahead of the Company’s IPO 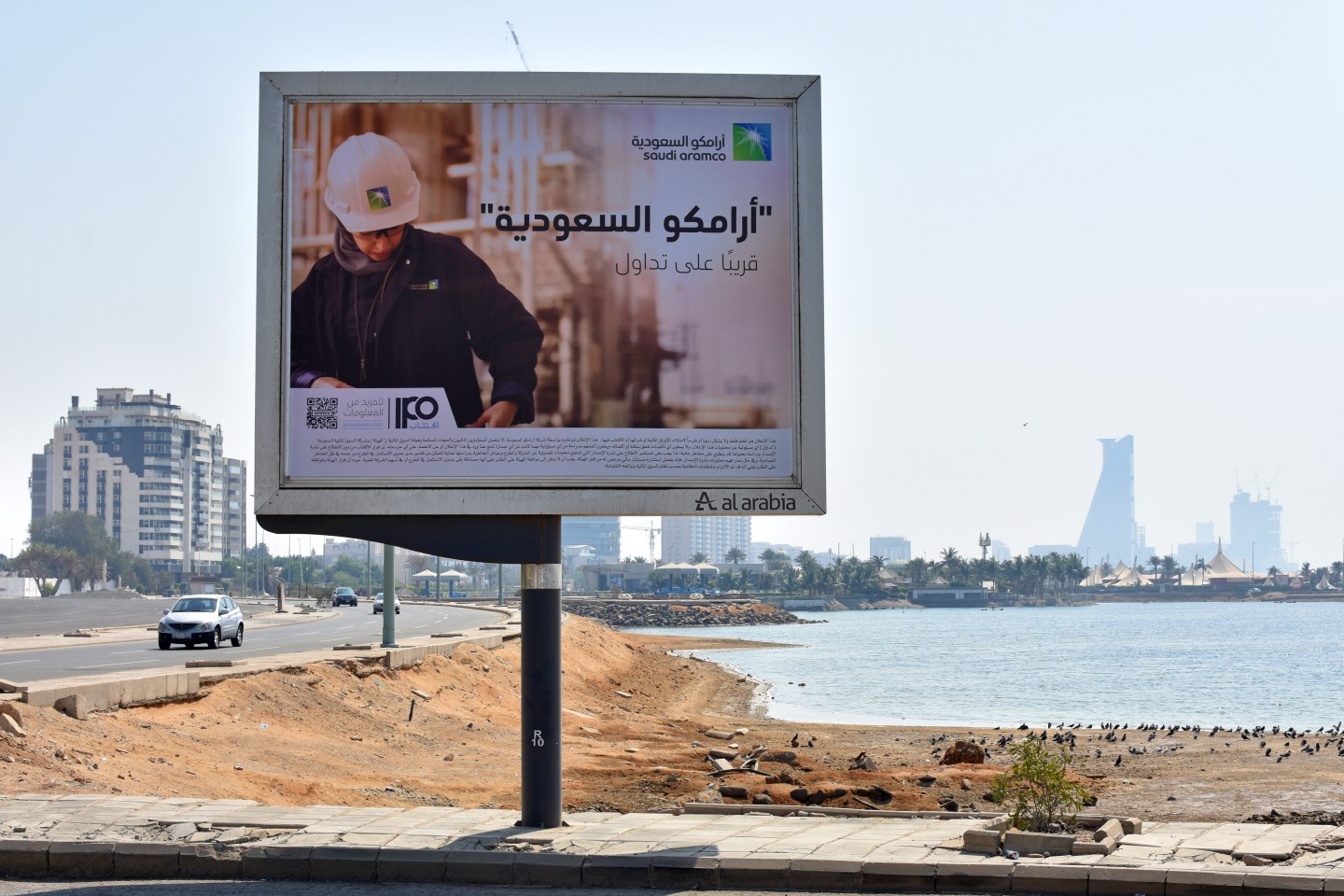 Investors will get a first indication Sunday of what valuation Saudi Arabia is placing on its crown jewel—the world’s biggest oil company, Saudi Aramco.

The state-run oil giant has promised to announce on Nov. 17 a price range for the shares it plans to sell in its keenly awaited initial public share offering next month. Multiply the price range by the company’s share capital (200 billion ordinary shares), and the overall value of the company begins to emerge.

Aramco is expected to sell no more than 2% of its shares, but the IPO on the Saudi stock exchange or Tadawul could still be the biggest in history, beating the $25 billion raised in Chinese e-commerce giant Alibaba’s 2014 IPO.

Skepticism outside the kingdom

Saudi Aramco pumps one in every eight barrels of oil produced worldwide and earned a net profit of $111 billion last year, more than Apple and Microsoft’s combined annual profits, but its value has been hotly debated.

Western investment banks are skeptical of the $2 trillion price tag put on the company by Saudi Crown Prince Mohammed bin Salman and say it might only be worth $1.2 trillion. (Still, at that market cap, that would be enough to just pip Apple as the world’s most valuable company). That skepticism is not shared by individual Saudi investors, who are expected to start enthusiastically applying for shares when the offer opens on Sunday.

Ayham Kamel, who heads the Middle East and North Africa research team at political risk consultancy Eurasia Group, said Saudi authorities would be careful not to set the offer price so high that middle-class Saudis lost money if the share price fell in future.
“I think they are probably seeking something in the range of $1.5 to $1.8 (trillion),” Kamel told Fortune.

“The challenge with proceeding with a $2 trillion valuation is that you could get a dip in the share price after the offering and with so many Saudis invested in the IPO, it’s not merely about a single person or rich families, it’s about the savings of middle-class Saudis and therefore it affects their position and the popularity of the leadership.”

“I think that intentionally the leadership wants this to be an exercise where ordinary Saudis can actually make money off of this,” he continued.

Saudis who buy and hold the shares for 180 days will receive one bonus share for every 10 shares they buy in the IPO, up to a maximum of 100 bonus shares. That gives investors a reason not to sell the shares immediately in hopes of turning a quick profit.

Saudi Aramco has said up to 0.5% of its shares will be set aside for individual Saudi investors but it has not yet said what percentage will be available for Saudi and foreign institutions. Saudis who apply for shares must stump up the highest price in the range. If the final price of the shares, due to be set on Dec. 5, is lower, they will be able either to ask for a refund or for more shares.

The book-building period for institutions also begins on Sunday and that will test the appetite of Saudi and foreign investment funds for the shares. Book-building closes on Dec. 4 and the number of shares to be sold will only be decided then.

There are many factors making Western investors cautious about the sale, ranging from the jittery IPO market, to recent attacks by Yemen’s Houthi group on two Saudi Aramco installations and growing public pressure for a quicker transition from fossil fuels to clean energy to contain global warming.

The subdued oil price, the U.S.-China trade war, slow growth in Europe and surging U.S. shale production are additional reasons to be bearish on petroleum.

While there was some skepticism among Western investors about the IPO, “if you are talking about Eastern investors, especially China, I think the news is quite public that they would like to buy shares,” said Kamel, referring to reports that China’s sovereign wealth fund and state-run oil firms are interested in taking a stake in Aramco.

He predicted that the main investors in Aramco would be “cornerstone investors from the region, including the sovereign wealth funds, then Saudi retail (investors), then some Eastern investors and some from the West.”

Aramco, which has 52 years of oil reserves, has pledged to pay at least $75 billion in dividends next year—a huge enticement for on-the-fence investors. At that level of dividend, the company would have to be valued at $1.25 trillion to yield 6%, on a par with oil majors BP or Royal Dutch Shell.

One problem analysts are wrestling with in trying to value Saudi Aramco is whether it should be compared to a Western oil major like ExxonMobil or BP or to emerging market national oil companies that trade at a steep discount to Western oil majors.
“In operating results (returns, low operating costs and reserves life) there is no question that Aramco is superior to western oil companies,” analysts at brokerage Bernstein said in a note this week.

But they cautioned: “While western oil majors are independent, the Kingdom of Saudi Arabia’s 98% ownership in Aramco will have an impact on decision-making and value creation for minority shareholders. This should be reflected in valuation multiples.”

—Saudi Aramco warns of a different kind of ‘climate change concern’
—Climate change is hitting insurance hard: How Swiss Re is adapting
—Energy companies say the oil glut—and shrinking profits—aren’t over
—Innovative tech offers a solution to aircraft pollution
—The Future 50 sustainability all stars
Subscribe to The Loop, a weekly look at the revolutions in energy, tech, and sustainability.