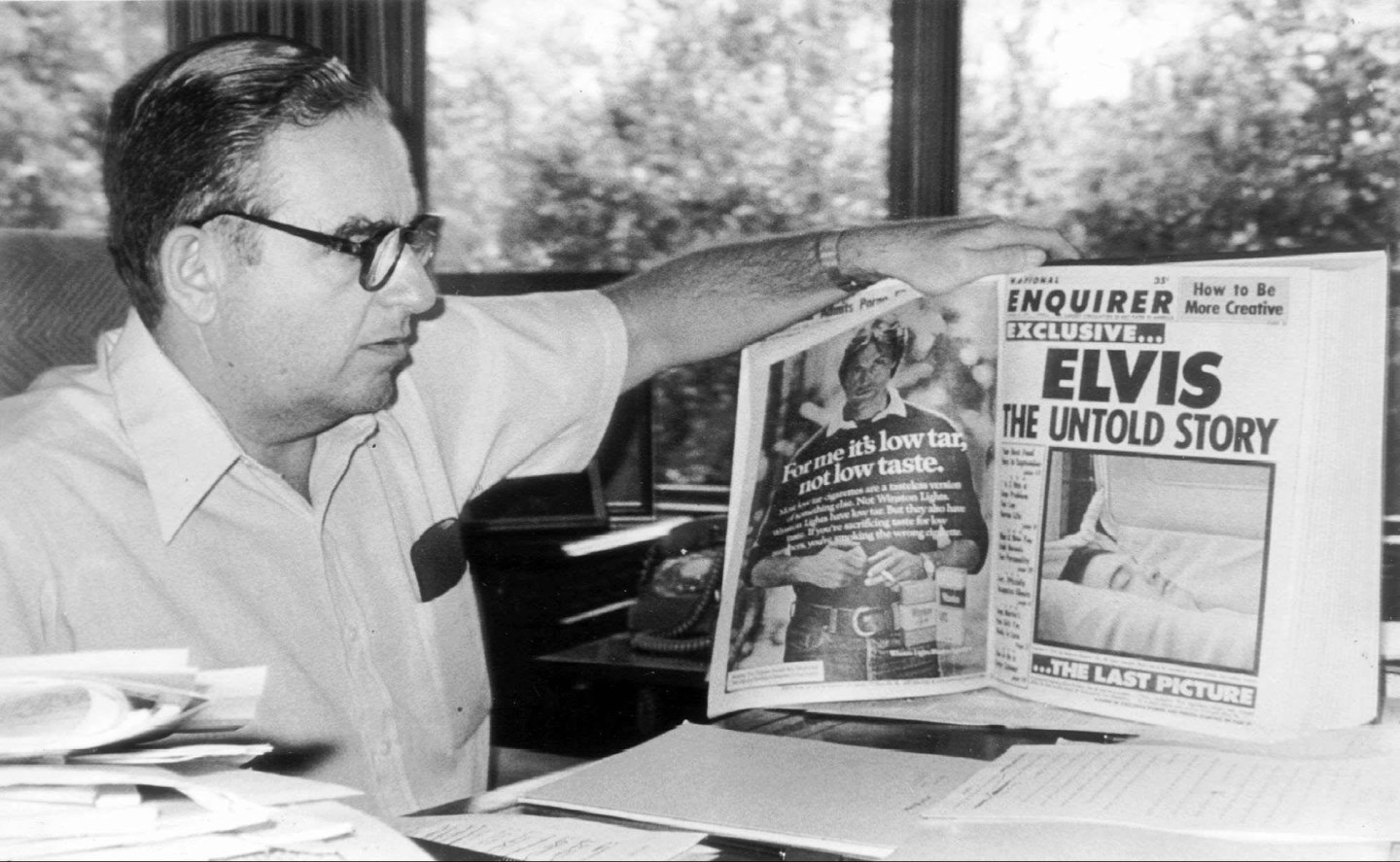 D4GPR7 Apr 05, 1978 - Boca Raton, Florida, U.S. - National Enquirer Publisher Generoso Pope oand copy of the photo of Elvis Presley. Pope died at 61, GENEROSO P. POPE JR., the millionaire owner and publisher of The National Enquirer, suffered a heart attack yesterday at his home in West Palm Beach, Fla., and was pronounced dead on arrival at the J.F.K. Medical Center in Atlantis, Fla. He was 61 years old. Mr. Pope, whose father founded Il Progresso, the New York City Italian-language newspaper, bought a weekly newspaper, The New York Enquirer, in 1952 for $75,000. It had a circulation of 17,000 copie
Magnolia Pictures

Filmmaker and director of Scandalous: The Untold Story of the National Enquirer Mark Landsman had never paid much attention to the tabloid subject of his documentary—at least not outside of the “hilarious” TV commercials for it that ran while he was growing up.

“I started to realize, at any checkout line that I was in, the intense bias of the messaging that was happening on the cover of these papers that I was used to seeing featuring Burt Reynolds and Loni Anderson, or Liz Taylor, or aliens,” he said. “It just felt bizarre to me.”

Leading up to the 2016 presidential election, the National Enquirer published numerous favorable cover stories about Republican candidate Donald Trump. Meanwhile, it depicted Hillary Clinton as ill, addicted to drugs, or headed for jail.

In 2015, most people had never heard the name David Pecker. Pecker was the chairman and CEO of American Media, Inc., the Enquirer’s publisher up until the company sold the publication to James Cohen, CEO of Hudson News Distributors, for roughly $100 million in April 2019. (Neither AMI nor Hudson News responded to Fortune’s requests for comment.)

Now, Pecker may not be a household name, but he’s a known entity. He’s made the news for receiving immunity after testifying in a federal investigation that the Enquirer “caught and killed” the story of Karen McDougal’s alleged affair with Trump—“catch and kill” refers to news organizations securing the rights to often scandalous stories only to purposefully bury them. This came right on the heels of Trump’s former lawyer and fixer Michael Cohen’s testimony that he’d arranged to pay both McDougal and Stephanie Clifford, a.k.a. Stormy Daniels, for staying quiet about their alleged affairs with Trump. One former Enquirer reporter in Scandalous went so far as to call Trump the tabloid’s “silent editor.”

As detailed in Scandalous, the National Enquirer has gotten close to pretty much every major American scandal since its tabloid makeover in the 1950s, when Generoso Pope Jr. bought the then-struggling outlet. Tailored to tantalize the average American—described in Scandalous by Enquirer staff as “Missy Smith from Kansas City”—the publication used shock and awe tactics to enthrall readers. Those tactics, the documentary suggests, have since trickled down to other publications today.

Scandalous aims to draw attention to the role the Enquirer played in shaping current American culture, politics, and media. “We wanted the viewer to walk away feeling complicit in this type of journalism,” says Courtney Sexton, SVP of CNN Films and Scandalous executive producer. “The National Enquirer only exists because we demand it. TMZ only exists because we demand it. … I would have to imagine that [the Enquirer] has influenced every publication to pay attention to what people want to consume.”

In 2017, after Landsman started noticing the Enquirer’s newfound political bent, his wife’s best friend invited him and his wife to dinner with her father, who turned out to be Malcolm Balfour, a former Enquirer reporter. Hired in 1972 as an article editor, Balfour said that his job was to “come up with the far out kind of stories [the Enquirer] had in those days.”

“His stories were unbelievable,” Landsman said. “He talked about things like espionage and disguises and checkbook journalism, bribes.” Balfour told a story of Jacqueline Kennedy and Aristotle Onassis arriving in a yacht at Palm Beach only for the Enquirer to attempt attaching a recording device underneath the yacht to eavesdrop on the pair. “It didn’t work, and we wound up not doing it,” Balfour said. “But there were so many of these stories.”

“It was straight out of an Ocean’s 11 movie,” said Landsman. This is when it clicked for him that the Enquirer’s activities would make for a great film.

Balfour introduced Landsman to other former Enquirer reporters, many who had “cut their teeth on Fleet Street,” the U.K.’s former journalism hub. Landsman was “absolutely fascinated” with them, Balfour said. Then, in April 2018, Ronan Farrow published a story in The New Yorker about the Enquirer and AMI suppressing stories that would have been damaging to Trump while he was running for president.

Landsman pitched the documentary to CNN Films, and they went for it. Sexton thought the film had a “great mix of being entertaining but also having an important message grounded in something that is culturally relevant.”

Making the movie proved a sort of balancing act. Landsman and CNN Films had to respect that their subjects who used to report at the Enquirer sometimes got the story right, while also showing how damaging and unethical a lot of the methods were. For instance, the Enquirer helped police with the O.J. Simpson case by finding pictures of him wearing the shoes that left prints at the scene where Simpson’s ex-wife, Nicole Simpson, and Ron Goldman were found murdered. On the other hand, according to former Enquirer staff interviewed in Scandalous, the publication’s reporters essentially fed a murder confession to the woman who sold drugs to John Belushi before he died. The documentary also shows how the tabloid was widely seen as complicit in the exploitative paparazzi culture that the public blamed for Princess Diana’s death.

More recent scandals involving the Enquirer under Pecker required a sort of write-around in the documentary. “No one from the current AMI universe would talk to us,” Landsman said, including Pecker and former Enquirer editor-in-chief Dylan Howard. About five former Enquirer employees said they “wished” they could talk for the film, according to Landsman, but couldn’t because they had signed nondisclosure agreements.

Other former Enquirer reporters asked to be paid for participating in the film, according to Landsman, which he and his team refused to do. “The only thing we paid for was archival,” he said. The film used footage from more than 100 different archive houses, Landsman estimated.

Landsman wasn’t surprised that “old school” Enquirer reporters asked for payment in exchange for their information. Paying sources was—and apparently remains—a regular practice at the Enquirer. What did surprise Landsman as he made Scandalous was “the kinds of bargains people strike with themselves.” Some of the former Enquirer reporters interviewed in the film had previously worked at news organizations like Reuters and the Chicago Sun-Times, where activities like bribing sources would have been considered a highly unethical practice. They decided to leave those publications for the Enquirer, where they got to fly on private jets at a moment’s notice to get the story, bags of cash to bribe sources in hand.

“It’s pretty shocking, and makes you hopefully, as a viewer, feel a little bit icky about what it takes to get these stories that we can’t turn our eyes away from,” Sexton said. One example in the documentary is how the Enquirer handsomely paid Elvis Presley’s cousin to snap a picture of the rock star in his coffin.

An impact on journalism and more

“The most interesting thing,” said Landsman, “is that some of those guys, to this day, will say, ‘I am absolutely a journalist.’” Even though many former Enquirer reporters engaged in journalistically unethical practices, as they recounted in Scandalous, they felt they were doing their jobs. The documentary also features interviews with non-tabloid journalists like Watergate reporter Carl Bernstein, the New York Times’s Maggie Haberman, and Ken Auletta, a longtime New Yorker writer. In the film, each addresses the tabloid’s massive influence on American culture and media, while also pointing out some of its more damaging practices. Bernstein called the publication’s relationship with Trump “the ultimate corruption,” while Haberman said the Enquirer’s practice of “silencing women with hush payments” is something she “had never heard of before.”

Scandalous illustrates Pecker’s social-climbing friendship with Trump (he’s a “short guy who wants to be taller,” Auletta says of the former CEO in the film), and the president’s long-term influence on the paper. Decades ago, the documentary states, Trump would send the Enquirer celebrity story tips under false names, before he became a subject of the tabloid himself, and, eventually, the tabloid’s so-called “silent editor.” (Where Landsman’s documentary leaves off, Farrow’s new book Catch and Kill picks right up, delving even deeper into the tabloid’s practices and its April sale, which some suggest may have left the Enquirer in the hands of more than just known purchaser Cohen.)

Landsman hopes Scandalous will get people thinking more about the value of their media consumption. The film—which Magnolia Pictures is releasing Nov. 15—is not just a documentary about an influential tabloid. It’s a cautionary tale about the future of media, and how it can affect a country’s culture and politics.

—The Man in the High Castle team on its final season
—Wrongful Conviction podcast visits Rodney Reed on death row
—A new documentary on “The Preppy Murder” examines victim blaming and privilege
—Inside the Oscars’ self-inflicted Best Foreign-Language Film headache
—The Kingmaker tackles the truths and “horrors” surrounding Imelda Marcos
Follow Fortune on Flipboard to stay up-to-date on the latest news and analysis.