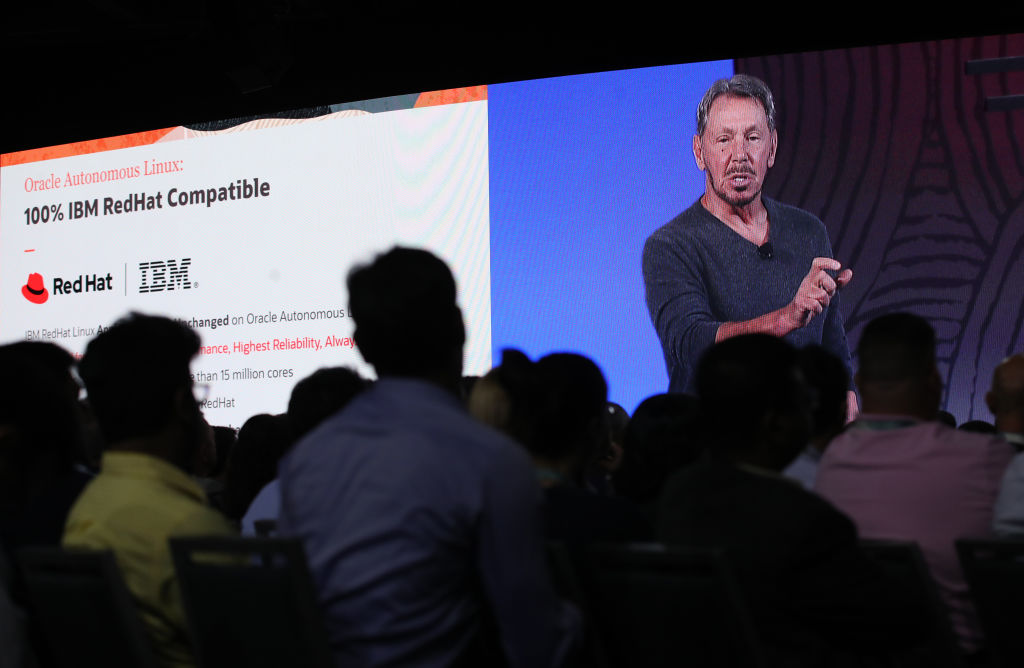 Good morning, Broadsheet readers! Job sharing gains traction, Hillary Clinton reacts to the wave of female British MPs who are stepping down over harassment, and Oracle still refuses to disclose data on its gender pay breakdown. Have a fabulous Thursday.

- Asking Oracle. It feels, at least anecdotally, that the business world is moving toward more transparency when it comes to gender data. There are plenty of examples to back up the impression: Salesforce’s continued leadership on this front, the U.K. law mandating that firms disclose men's and women's pay, and, just this week, Microsoft’s decision to add a new management dimension to its diversity report.

There is at least one notable holdout: Oracle. As Bloomberg reports, founder and chair Larry Ellison is resisting shareholder pressure to disclose compensation data that some of Oracle’s Silicon Valley peers have released. The billionaire and his board have opposed the demand of Pax World Funds as “a waste of time and money because the company is already committed to equal pay for equal work,” Bloomberg reports.

A few parties might take issue with that statement: namely, former employees and the U.S. government, which have sued the tech giant for allegedly systematically underpaying women and people of color. (Oracle denies those claims.)

Pax issued the same petition last year and nearly two-thirds of Oracle shareholders who aren’t senior executives or directors backed it; up from 56% the year prior.

In response to Pax’s third attempt at the initiative this year, Oracle’s board unanimously encouraged investors to vote down the proposal. It says its efforts to promote women make it a leader on the matter; to be sure, Oracle CEO Safra Catz is one of the few female chief executives in tech. Oracle also argued that public pay disclosures “would not lead to meaningful gains in support of workforce diversity and gender pay equity.”

Research, however, suggests otherwise. A study of Danish companies—before and after the introduction of the country’s 2006 Act on Gender Specific Pay Statistics—found that disclosure of disparities in gender pay does in fact narrow the gender wage gap.

- Two for one. Job-sharing started as a tool to help mothers ease back into work after maternity leave and juggle family commitments. Now the practice of splitting responsibilities with a colleague has become more likely to lead to upward mobility and shared promotions, rather than stalling out. Wall Street Journal

-Talking Shoptalk. Fortune's Phil Wahba writes about the announcement that Shoptalk, a major annual retail conference, will feature only female speakers this year. Zia Daniell Wigder, Shoptalk's chief global content officer, tells Phil that the decision meant the conference had to ask 60 male speakers who'd already been booked to give their spot to a female colleague. Fortune

- Job creator? President Trump made quite the claim about Ivanka Trump this week: that she personally created 14 million jobs. Trump said that he tries to get Ivanka to "please talk about something else" but she is only interested in jobs and job creation. A bit of factchecking—the U.S. economy has added only 6 million jobs in total in the past three years. Vanity Fair

- Whistleblower campaign. The lawyer who blew the whistle on alleged sexual harassment at Lloyd's of London is now accusing his employer, Tokio Marine Kiln Group—which operates inside the insurance marketplace—of "a campaign of harassment, racial discrimination and victimization." The firm said it does not "tolerate the victimization of any whistle-blower." Bloomberg

- Hillary on harassment. Hillary Clinton weighed in on the flood of female MPs standing down in U.K. elections because of online harassment. "That is not only a threat to individuals, that is a threat to democracies," she said. "That is the path [to] fascism." Guardian

- Back to burgers. Carl's Jr.'s "sex sells" advertising isn't working anymore. The burger chain is reevaluating its approach. Executives at CKE Restaurants Holdings want to "keep food at the center of what we’re doing," and are employing an ad agency that has specialized in moving brands beyond legacies of sexism. New York Times

- The private club for POC. The long-anticipated private space Ethel's Club—a "social and wellness club," with many of the features of a co-working space—opened in New York this week. Founded by Najla Austin, it's a space for people of color. But Austin wants the club to be "more than a POC version of The Wing or WeWork." Vice

- Actors on actors. It's Hollywood roundtable season, and in this year's drama actress roundtable, Awkwafina, Laura Dern, Scarlett Johansson, Jennifer Lopez, Lupita Nyong'o, and Renée Zellwegger sit down together. Of representation in the entertainment industry, Nyong'o says: "What I really want is for it to not be a fad." The Hollywood Reporter

Muslim survivors of domestic violence need you to listen HuffPost

How high can high-waisted pants go? The New Yorker

-Dr. Christine Blasey Ford writing about Chanel Miller for the Time 100 Next list