Trump’s Steel Tariffs: a 2020 Political Plus or Millstone? 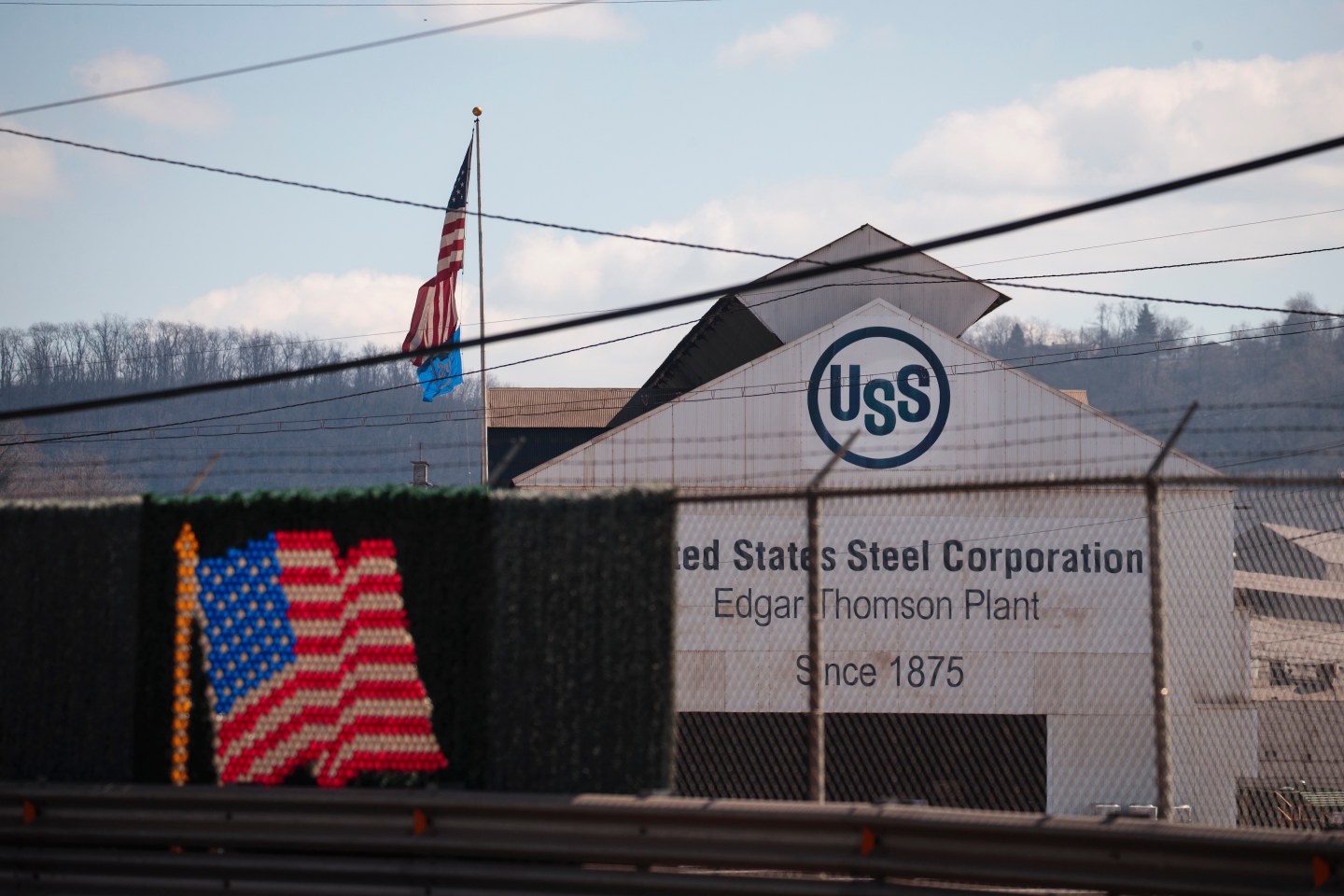 Trump said his goal was to raise steel import prices so U.S. steel mills could better compete, which hasn’t occurred. Also left out of his calculus was how higher prices have harmed legions of U.S. manufacturers dependent on steel, including imports.

The industry has added just 1,800 jobs since February 2018, the month before the tariffs took effect. That’s a mere rounding error in a job market of 152 million and over a period when U.S. companies overall added nearly 4 million workers. Steelmakers employ 10,000 fewer people than they did five years ago.

“Even with these very high tariffs, the industry has not been able to take advantage,” said Christine McDaniel, a senior research fellow at Mercatus Center, an economic think tank at George Mason University.

Trump’s pledge to rejuvenate the steel industry had helped him win votes in the 2016 election in such key states as Ohio, Pennsylvania, and Wisconsin. His inability to deliver a boom for the industry raises doubts about how he’ll fare in those states in 2020. Voters will be weighing whether to move on from Trump or reward him for at least taking the fight to foreign steel mills.

What’s caused steel prices to fall are factors ranging from lower demand— thanks to a weaker global economy—to the industry’s own rush to boost production after Trump’s tariffs took effect.

For the first few months after Trump’s tariffs took effect, steel prices did rise. The price of a metric ton of hot rolled band steel hit $1,006 in July 2018, according to the SteelBenchmarker website, which tracks steel prices. Since then, it has plunged to $557—lower than before the tariffs.

“Over time, (pricing has) come down, down, down, down, down,” said Mark Lash, president of United Steelworkers Local 1066 in Gary, Ind., which represents about 1,400 workers at US Steel’s plant there. “It’s not where it was when the tariffs were announced.”

The president’s campaign against foreign steel has been overshadowed by his trade war with China over Beijing’s industrial policies, which are widely seen as predatory. But the steel tariffs came earlier and demonstrated Trump’s willingness to overturn seven decades of U.S. free-trade policies and aggressively target imports.

By taxing imported steel, Trump risked raising costs for the many U.S. industries that use steel, straining ties with American allies, and defying the limits of his authority to unilaterally punish trading partners.

Even before Trump, steelmakers had enjoyed unusual protection from imports. In moves that often pre-dated Trump, the United States has imposed more than 180 taxes on steel from 35 countries from Brazil to Belarus. The argument has been that these countries dump steel at artificially low prices or unfairly subsidize their steelmakers. Cheap Chinese steel has been virtually banned from the American market.

But Trump was determined to revive heavy industries like steel and protect them from what he termed unfair foreign competition. He installed a veteran lawyer for the steel industry, Robert Lighthizer, as his top trade negotiator.

The impulse to protect steelmakers was in some ways odd. After all, the economic benefits of protecting steel are modest: The industry employs just 142,000 people. By comparison, Home Depot alone employs 400,000. And the newest steel plants are highly automated. They don’t need nearly as many workers as steelworks of the past did, so the potential job gains are limited.

Then there’s the China problem. Over the past two decades, Chinese steel producers have flooded world markets, driving down prices. But the U.S. already shuts out most Chinese steel. The result is that any American steel tariffs would deliver punishment elsewhere—notably to U.S. allies and steel suppliers like Canada, Mexico. and South Korea.

Nevertheless, Trump’s trade team decided steel was worth fighting for. For decades, good-paying steel jobs had lifted millions of blue-collar workers into the middle class.

One of them, Doug May, spent 43 years working at US Steel’s Granite City plant in Illinois before retiring. Since the Great Recession, that plant has idled and restarted its furnaces at least twice. Despite the instability, May says the Granite City plant provided a solid job.

“You can really raise a family,” he said. “I sent three boys to college working there.”

“Right after Trump made the announcement, US Steel announced they’d be restarting one of the two furnaces they’d idled,” May said. “Everybody was pretty excited.”

Trump had unsheathed an unconventional weapon. Section 232 of the Trade Expansion Act of 1962 gives the president broad authority to tax imports that his Commerce Department decrees a threat to national security. Section 232 tariffs are also hard to challenge at the World Trade Organization. The WTO grants countries broad leeway to determine their national security interests.

Past presidents used Section 232 power very sparingly. This was partly to avoid encouraging other countries to block imports on dubious national security grounds.

But at Trump’s cue, Commerce Secretary Wilbur Ross declared foreign steel a menace to America’s national security. The Pentagon ostensibly went along, though the defense secretary at the time, James Mattis, said the military needed just 3% of U.S. production of steel and aluminum and that imports didn’t hinder its ability to protect the nation. Mattis also warned the tariffs could have a “negative impact on our key allies.”

In March 2018, Trump went ahead with tariffs of 25% on steel and 10% on aluminum. America’s trading partners quickly lashed back with retaliatory tariffs. The European Union imposed 25% taxes on U.S. bourbon and tobacco.

Trump’s aggressive use of Section 232 tariffs—and his threat to impose them on foreign cars, to—has sparked a backlash in Congress, which is weighing legislation to curb presidential power to tax imports on national security grounds.

In January, Trump boasted on Twitter: “Tariffs on the ‘dumping’ of Steel in the United States have totally revived our Steel Industry… A BIG WIN FOR U.S.”

The first sign of trouble showed up on the stock market. Shares of steelmakers had topped out on Wall Street in February 2018 before the tariffs hit. Since then, the NYSE Arca Steel Index has plunged 32%.

The combined earnings of US Steel, AK Steel, Steel Dynamics, and Nucor tumbled more than 50% in the first two quarters of this year. Capacity utilization dipped back below Trump’s 80% target in July and August.

And the tariffs have so far done nothing to blunt China’s dominance. China accounts for 54% of world steel production. The United States, 5%.

Growth is slowing in the United States and worldwide partly because Trump’s own tariffs have raised costs and escalated uncertainties for businesses. China’s economy, the world’s second-biggest and for decades a reliable engine of growth, has been decelerating under the weight of Trump’s tariffs and deliberate government policies to curb debt.

The steelmakers themselves may bear some blame for their problems. Flush with optimism after Trump’s tariffs took effect, they went on an expansion spree, creating a capacity glut that Bank of America Merrill Lynch analyst Timna Tanners calls “Steelmageddon.”

“They overestimated how much steel they’d need,” Tanners said. As the supply of steel overwhelms demand, prices typically fall.

“We’re shooting ourselves in the foot now because of all the extra capacity being built,” said May, the former Granite City steelworker.

At some plants, layoffs and closings have followed. U.S. Steel is idling its tin mill in East Chicago, Indiana. Bayou Steel Group is laying off 376 and closing its mill in LaPlace, La.

“It seems like it kind of backfired,” said Mark Perry, a scholar at the conservative American Enterprise Institute. “Any kind of revitalization of U.S. steel just hasn’t happened.”

The Commerce Department, which has overseen the tariffs, said in a statement:

“Since tariffs were imposed the American steel sector has seen increased growth and investment which will, in turn, ensure a stable domestic supply of the materials that are crucial to our nation’s security. It is true that industry conditions globally have weakened recently, but their effect on the U.S. industry would be worse without these measures.”

Ned Hill, a professor at Ohio State University who studies economic development, said he thought Trump’s steel tariff campaign was doomed to fail because the market would inevitably move to counter the higher costs.

And far more American industries consume steel than make it. A study last year by researchers at Harvard University and the University of California, Davis, found that industries that are heavy users of steel—and stand to suffer when tariffs raise steel prices — employ 2 million workers. That’s 14 times the number of workers in the steel industry.

More than 800 manufacturers have petitioned the administration for exemptions from the tariffs so they can buy imported steel products that are hard to get from U.S.-based suppliers, according to research by Mercatus’ McDaniels.

But U.S. steelmakers can object to the exclusion requests. And through July, Commerce had approved fewer than half the requests.

Steel-consuming companies have sought alternatives. Some have moved production overseas, where steel imports aren’t subject to Trump’s tariffs. Or they’ve reduced their steel purchases or substituted alternatives from plastic or composite materials.

Critics note that President George W. Bush also sought to protect the steel industry by imposing tariffs in 2002. Rebuked by the WTO, Bush withdrew the tariffs the next year. While Bush’s tariffs were in place, the industry actually lost 14,000 jobs.

Citing the Bush experience, 15 former chairs of the White House Council of Economic Advisers, including several from Republican administrations, had urged Trump not to impose steel tariffs.

“The diplomatic costs might be worth it if the tariffs generated economic benefits,” they wrote. “But they would not. Additional steel tariffs would actually damage the U.S. economy.”

“Anyone that understood economics,” said Ohio State’s Hill, “knew there was no way (Trump’s steel tariffs) would work any longer than a year.”

—Paul Ryan’s new foundation makes poverty experts and Medicare advocates nervous
—Voters over 65 remember Nixon—and want to impeach Trump
—How Mitch McConnell could use impeachment to scramble the Democratic primary
—Sherrod Brown has some advice for 2020 candidates hoping to win in Ohio
—Kids brought guns to school at least 392 times last year. What experts say we should do
Get up to speed on your morning commute with Fortune’s CEO Daily newsletter.