As the Steel Industry Falters, Will Trump Pay a Political Price? 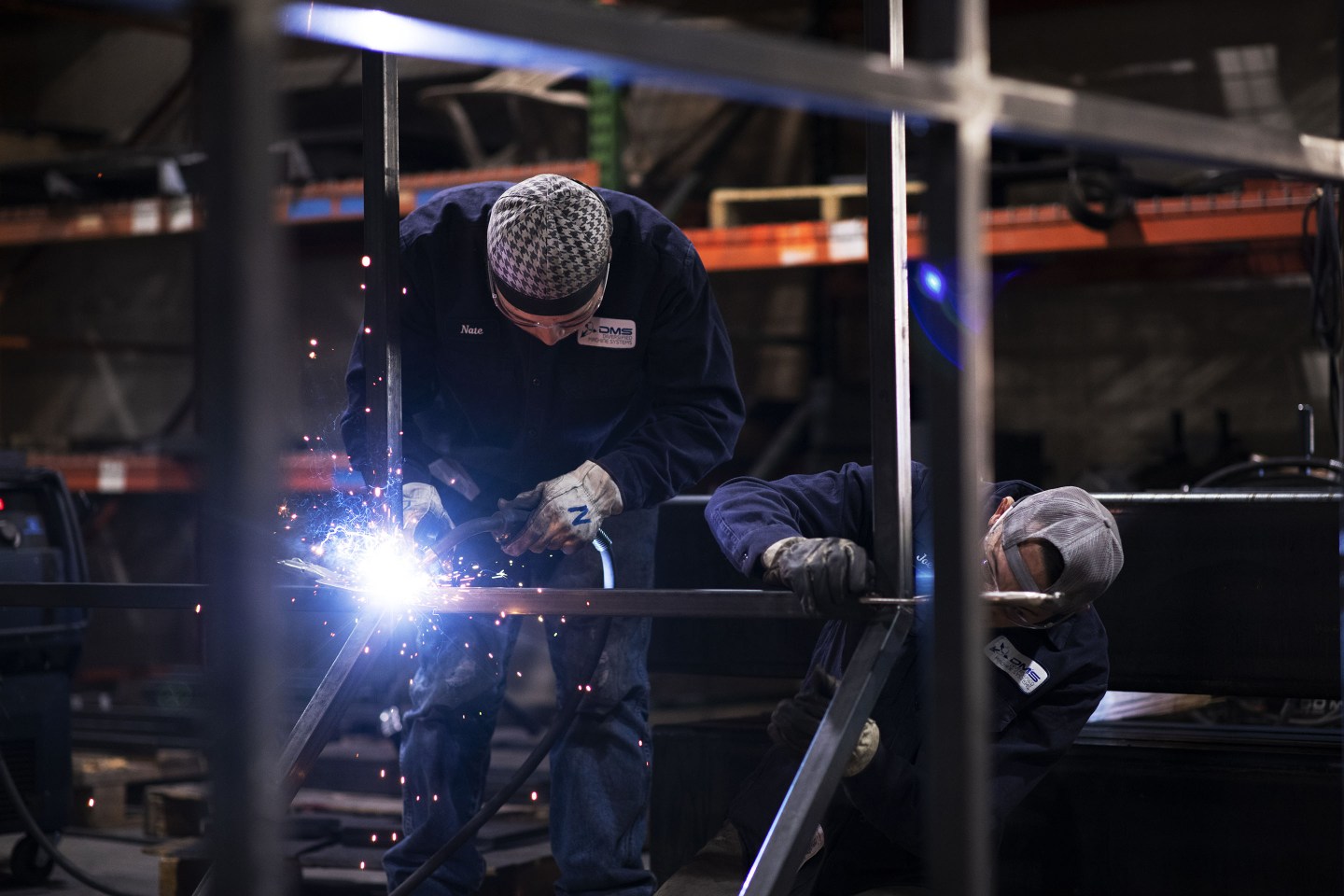 Employees prepare a steel frame at the Diversified Machine Systems LLC (DMS) manufacturing facility in Colorado Springs, Colorado, U.S., on Tuesday, Sept. 24, 2019. Businesses across America are straining to cope with import taxes and protectionism under the Trump administration, which next week hosts senior Chinese officials for the highest level talks since July and just days before another threatened tariff increase. Photographer: Rachel Woolf/Bloomberg via Getty Images
Rachel Woolf—Bloomberg via Getty Images

President Donald Trump is many things, and one of them is a loud and longtime booster of the domestic steel industry. A builder of skyscrapers, Trump campaigned on his willingness to get tough on foreign competitors whom, he argued, were dumping cheap steel in the U.S.

The Section 232 tariffs Trump levied on China in February 2018—set at 25% for steel—were a campaign promise fulfilled, not to mention a highly-visible gift to voters in Rust Belt states like Ohio, Michigan, and Pennsylvania, whose support tipped a tight election in his favor.

“Steel was dead... Okay?” Trump bragged before a crowd in Pennsylvania in August. “And I put a little thing called ‘a 25% tariff’ on all of the dumped steel all over the country. And now your business is thriving.”

There’s a problem with this boast, however—the industry is having a pretty lousy year.

The price of steel has dropped like an anvil in an old cartoon to $502 per metric ton in September from a high of $835 last year, down nearly 40%. That, in turn, has dragged down share prices.

Nucor is off 21%, while Steel Dynamics has fallen 36%. And industry stalwart U.S. Steel has seen its stock price lose 64.4% of its value year-over-year. (David Roderick, the former U.S. Steel CEO credited with modernizing the company in the 1980s, died at 95 on October 8.)

With investor confidence waning, the industry was jolted on October 1, when a Louisiana mill closed unexpectedly, resulting in 376 workers losing their jobs overnight. Louisiana Gov. John Bel Edwards, a Democrat, placed the blame squarely on the Trump administration’s trade policy.

“We know that this company, which uses recycled scrap metal that is largely imported, is particularly vulnerable to tariffs,” Bel Edwards said. “Louisiana is among the most dependent states on tariffed metals, which is why we continue to be hopeful for a speedy resolution to the uncertainty of the future of tariffs.”

White House economic adviser Peter Navarro colorfully rejected Bel Edwards’ claim, saying the business “folded like a cheap tent under the weight of a leveraged buyout by Wall Street vultures picking the carcass of a highly inefficient and antiquated plant.”

While it is debatable whether tariffs or vultures sealed the fate of this particular mill, the Trump administration’s trade policy is certainly shaping larger trends—but in a way that’s more nuanced than most politicians would have you believe.

The industry’s challenges, analysts say, are not due to a shortage of steel caused by the trade wars, but rather the artificial sugar high the industry experienced a year ago, when Trump’s tariffs first went into effect.

As fears of a trade war mounted, industries that depend on steel, particularly cheaper imported steel, grew fearful of shortages and began stockpiling, driving up prices. Meanwhile, Trump’s tax cuts enriched steel companies as much as any other sector, meaning large producers were flush with cash.

“The Trump tax cuts were a huge shot in the arm for companies that pay taxes, though some don’t pay taxes,” Tanners says.

With orders pouring in and prices climbing, companies began looking for ways to expand capacity, primarily by restarting idle mills and scooping up non-union producers at the low end of the market. It wasn’t so much that the dead were coming back to life under Trump’s tariffs; it was more like an unassuming neighbor won the Powerball and went on a shopping spree.

“We’re unused to seeing protectionism like this in a strong demand environment,” says Tyler Kenyon, an analyst at Cowen. “Trade cases and trade litigation tend to come forward in weaker markets.”

Of course, you can see where this is going.

All those customers who built up fat inventories in 2018 are still sitting on them in 2019. Meanwhile, economic growth has slowed, both in the U.S. and even more so globally, further reducing demand among customers in cyclical industries like auto and oil and gas.

Idled mills have come back online in an environment where extra capacity is not particularly helpful; meanwhile, the steel companies’ balance sheets have deteriorated significantly over the past year, scaring away investors.

Ironically, many of the most dire predictions about steel tariffs may have missed the mark. Critics worried tariffs would drive up prices on products ranging from washing machines to soft drinks, gutting margins and forcing businesses to pass along price increases to consumers. The opposite may ultimately prove to be true. With steel prices trending lower for the foreseeable future, costs for downstream industries look to be pretty favorable, Kenyon observes.

“If the administration was thinking that broadly speaking the U.S. is a high cost environment and they wanted to drive more investment and lower the cost of steel, then perhaps this was the right thing to do,” he says.

The remaining question: How will all of this play in steel country?

Just this week, U.S. Steel’s CFO resigned amid a broader management shakeup, and Timken Steel, a family-run public company with deep ties to the city of Canton, Ohio, removed its CEO. Still, despite the poor results, industry leaders tend to maintain a favorable view of Trump, according to Tanners. As much as they like his tariffs, they are equally impressed by some proactive moves the Commerce Department has taken to cut regulation and red tape.

“Their sentiment when meeting with administration officials is, ‘We have someone who supports us, someone who will level the playing field,’” she says.

But one has to wonder how rank-in-file workers will react if the industry continues to languish. A year ago, the United Steelworkers Union struck a four-year deal with U.S. Steel to raise wages by 14% and secure generous benefits. As one major producer after another lowered their revenue forecasts this fall, a fresh round of belt-tightening appears inevitable.

On October 10, U.S. Steel released preliminary guidance saying that though third quarter revenue was not as bad as previously forecast, the company is planning a major restructuring with an eye towards $200 million in cost savings.

In August, for example, U.S. Steel warned some employees in its Great Lakes Works facility south of Detroit that they may face layoffs, citing the need “to align with current market conditions.”

Mills at the higher-end of the market face the most exposure, meaning that any potential job losses would probably be centered in traditional bastions of the industry like Pennsylvania, Michigan, Ohio, and Indiana—places where Trump can ill afford to lose electoral ground as he fights off impeachment and heads into the 2020 campaign.