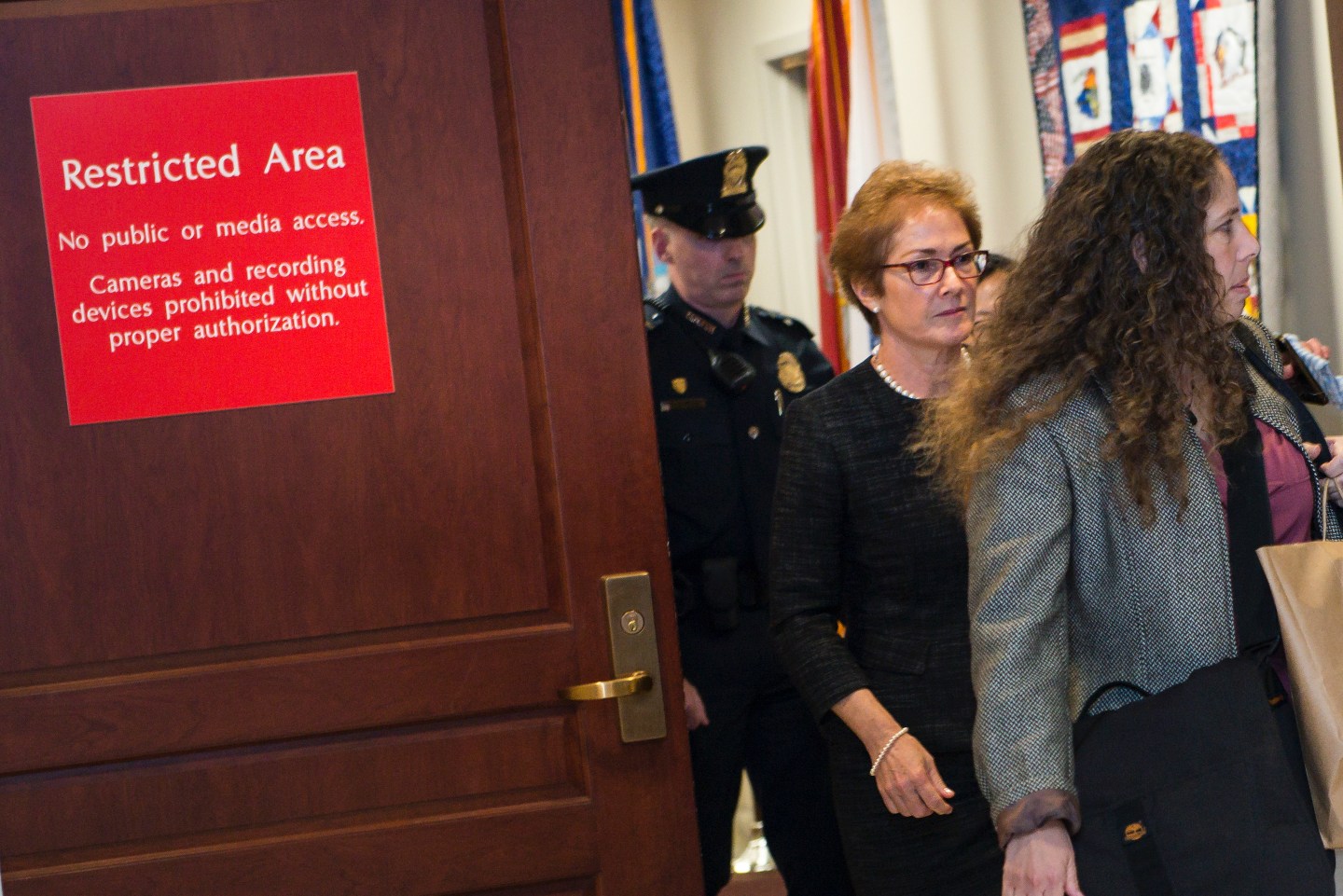 Former U.S. Ambassador to Ukraine Marie Yovanovitch leaves the restricted area of the U.S. Capitol on October 11, after giving nine hours of impeach inquiry testimony before the House Intelligence, Foreign Affairs, and Oversight and Reform committees. Her testimony and that of Michael McKinley, former aide to Secretary of State Mike Pompeo, have been released. Release of transcripts of other impeachment inquiry witnesses are slated to follow. (Photo by Liz Lynch/Getty Images)
Liz Lynch—Getty Images

Laying out the anatomy of a chilling smear campaign, former U.S. Ambassador to Ukraine Marie Yovanovitch told House investigators in a transcript released Monday that Ukrainian officials had warned her in advance that Rudy Giuliani and other allies of President Donald Trump were planning to “do things, including to me” and were “looking to hurt” her.

The former envoy, who was pushed out of her job in May on Trump’s orders, testified a senior Ukrainian official told her: “I really needed to watch my back.”

While the major thrust of Yovanovitch’s testimony had come out on the day she testified behind closed doors last month in the impeachment inquiry, Monday’s 317-page transcript provided new details about the bewildering sequence of events that led to the career diplomat’s ouster. Her account started with the warnings from Ukrainian officials and then led legislators through various attempts to badmouth her both in Ukraine and the U.S.

The emotion behind her nine hours of testimony was evident. At one point, when Yovanovitch returned from a short break, one of her questioners told her, “We understand this is a difficult and emotional topic.” (Read a copy of Yovanovitch’s House impeachment testimony here.)

Yovanovitch also offered significant new threads of information—including the potential that Trump was directly involved in a phone call with Giuliani, the president’s personal lawyer, and the Ukrainians dating back to January 2018—while pushing back on Republican questions suggesting she harbored opposition to Trump.

She had been recalled from Kyiv before the July 25 phone call between Trump and Ukrainian President Volodymyr Zelensky, at the center of the impeachment inquiry but was “surprised and dismayed” by what she understood from the transcript of the call.

Yovanovitch told investigators she was shocked to learn Trump had called her “bad news” in the phone call, adding she felt threatened and perplexed by his remark she was “going to go through some things.” The diplomat added she worried her job and pension could be at risk, but “so far” she wasn’t concerned about her personal safety, although “a number of my friends are very concerned.”

Yovanovitch was recalled from Kyiv as Giuliani pressed Ukrainian officials to investigate baseless corruption allegations against Democrat Joe Biden and his son Hunter, who was involved with Burisma, a gas company there.

Giuliani’s role in Ukraine was central to Yovanovitch’s testimony. She said she was aware of an interest by Giuliani and his associates in investigating Biden and Burisma “with a view to finding things that could be possibly damaging to a Presidential run,” as well as investigating the 2016 election and theories of Ukraine interference instead of Russian interference.

Asked directly if Giuliani was promoting investigations on Burisma and Biden, Yovanovitch said, “It wasn’t entirely clear to me what was going on.”

More directly, she drew a link between Giuliani and two businessmen—Lev Parnas and Igor Fruman—who have been indicted in the U.S. on charges stemming from campaign donations they made to U.S. politicians with foreign money—as part of the campaign to oust her. She understood they were looking to expand their business interests in Ukraine “and that they needed a better ambassador to sort of facilitate their business’ efforts here.”

Former Ukraine prosecutor “was looking to hurt me in the U.S.”

Yovanovitch said she was told by Ukrainian officials last November or December that Giuliani, the president’s personal lawyer, was in touch with Ukraine’s former top prosecutor, Yuri Lutsenko, “and that they had plans, and that they were going to, you know, do things, including to me.”

She said she was told Lutsenko “was looking to hurt me in the U.S.”

At one point in April, Yovanovitch said she received a call from Carol Perez, a top foreign service official, at around 1 a.m. Ukraine time, abruptly telling her she needed to immediately fly back to Washington. Yovanovitch said when she asked why, Perez told her, “I don’t know, but this is about your security. You need to come home immediately. You need to come home on the next plane.”

Yovanovitch said she didn’t think Perez meant it was to protect her physical security. Instead, Yovanovitch said, Perez told her it was for “my well-being, people were concerned.”

The diplomat said she sought advice from Gordon Sondland, Trump’s ambassador to the European Union, after an article appeared in The Hill newspaper about Giuliani’s complaints against her and Sondland told her, “‘You need to go big or go home,” advising her to “tweet out there that you support the president.”

Yovanovitch said she felt she could not follow that advice.

The former envoy stressed to investigators she was not disloyal to the president.

“I have heard the allegation in the media that I supposedly told our embassy team to ignore the President’s orders since he was going to be impeached,” she said. “That allegation is false.”

She answered “no” when asked point blank if she’d ever “badmouthed” Trump in Ukraine, and said she felt U.S. policy in Ukraine “actually got stronger” because of Trump’s decision to provide lethal assistance to the country, military aid that later was held up by the White House as it pushed for investigations into Trump’s political foes.

Under friendly questioning from Democratic Rep. Sean Patrick Maloney of New York, Yovanovitch said she considered herself good at her job and had been there more than three years and her bosses at the State Department wanted to extend her tour.

“It seems to me they threw you to the wolves. Is that what happened?” Maloney asked.

Long hours into her testimony, Yovanovitch was asked why she was such “a thorn in their side” that Giuliani and others wanted her fired.

Yovanovitch, still employed by the State Department, is doing a fellowship at Georgetown University.

Yovanovitch told the investigators the campaign against her, which included an article retweeted by Donald Trump Jr., undermined her ability to serve as a “credible” ambassador and she wanted Secretary of State Mike Pompeo to issue a statement defending her. But no statement was issued.

McKinley, a 37-year veteran career diplomat, testified he decided to resign from his post as a senior adviser to Pompeo after his repeated efforts to get the State Department to issue a statement of support for Yovanovitch after the transcript of the Trump-Zelensky phone call was released. “To see the impugning of somebody I know to be a serious, committed colleague in the manner that it was done raised alarm bells for me,” he said.

McKinley said he was already concerned about politicization at the State Department and the refusal to publicly back Yovanovitch convinced him it was time to leave. (Read a copy of McKinley’s House impeachment inquiry testimony here.)

“To see the emerging information on the engagement of our missions to procure negative political information for domestic purposes, combined with the failure I saw in the building to provide support for our professional cadre in a particularly trying time, I think the combination was a pretty good reason to decide enough, that I had no longer a useful role to play,” he said.

House Intelligence Committee Chairman Adam Schiff says the panels are releasing the transcripts so “the American public will begin to see for themselves.”

Republicans have called for the release of the transcripts as Democrats have held the initial interviews in private, though Republican lawmakers have been present for those closed-door meetings.

—Paul Ryan’s new foundation makes poverty experts and Medicare advocates nervous
—Wall Street’s scorn for Elizabeth Warren boils over
—Trump’s national parks changes could, ironically, help Jeff Bezos
—Sherrod Brown has some advice for 2020 candidates hoping to win in Ohio
—Kids brought guns to school at least 392 times last year. What experts say we should do
Get up to speed on your morning commute with Fortune’s CEO Daily newsletter.