Anger Grows as PG&E Struggles to Communicate During Power Shutdown 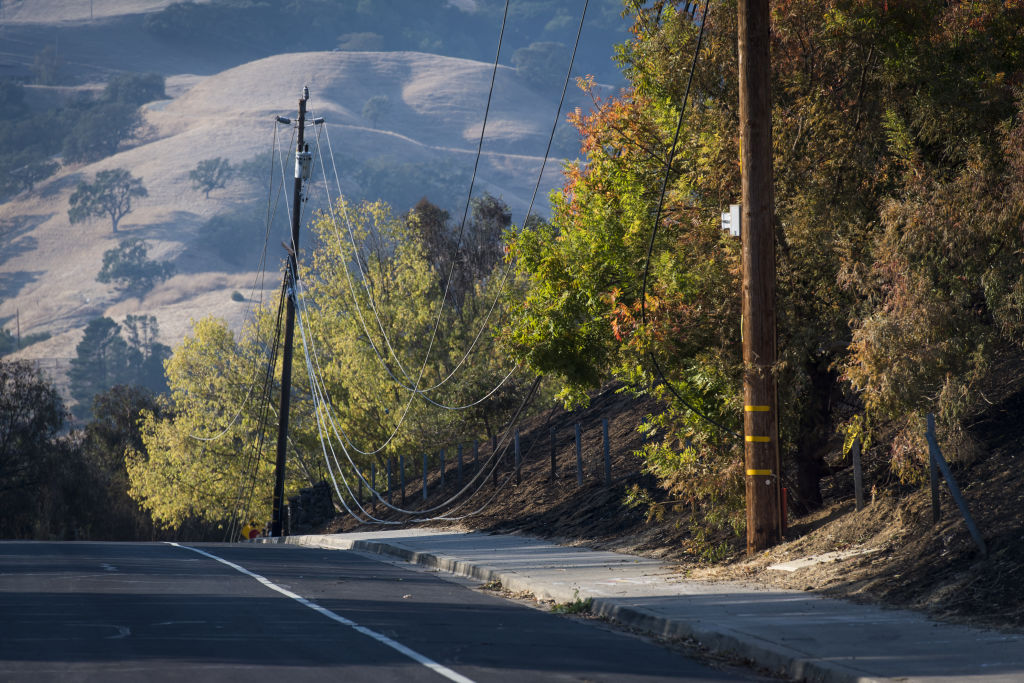 Fallen power lines touch the ground on Camino Diablo road in Lafayette, California, U.S., on Monday, Oct. 28, 2019. In Lafayette, east of San Francisco, county fire officials are investigating a fallen PG&E transformer and a conductor that came into contact with a loose communication cable as the possible ignition sources of a blaze that forced evacuations, destroyed the Lafayette Tennis Club and damaged a home. Photographer: David Paul Morris/Bloomberg via Getty Images
David Paul Morris—Bloomberg/Getty Images

As Pacific Gas & Electric deliberately shut off power to homes and businesses to prevent wildfires, it has failed to communicate with California officials, given conflicting accounts about when the lights would go out and advised people to get information “the old-fashioned way, through calling on a landline.”

The behemoth power company is still struggling to get it right, weeks after it first started plunging millions of people into darkness to prevent strong winds from toppling its power lines and igniting fires.

PG&E’s widespread power outages have come in waves in October, sparking reprimands from state officials and growing anger as the blackouts stretch on for days in Northern California.

Caught in the middle are millions of customers forced to endure without the needs of modern life. More than 500,000 people remained in the dark Wednesday, some since Saturday.

“Northern California residents are exhausted. They’re fried. And this is completely unacceptable,” said state Sen. Mike McGuire, a Democrat who represents vast swaths of areas still in the dark. “Californians deserve better from this utility.”

Winds calmed down Wednesday, easing the dangerous fire conditions and allowing PG&E to shift its focus to getting the electricity back on.

But the pain moved south, where several fires broke out amid howling winds in the Los Angeles area and forced evacuations. Utilities in Southern California have shut off power to 250,000 people.

Two powerful windstorms have pounded Northern California in less than a week, prompting PG&E to shut off the lights three times in one week and four times this month. But its equipment still may have ignited a massive blaze in Sonoma County wine country that has destroyed 94 homes.

PG&E faced crushing condemnation for its poor execution in the first widespread blackout Oct. 9 — its website failed, and customers couldn’t get through by phone. People were confused about when and where the power would go out.

Local governments complained about the lack of communication before the Oct. 9 outage and filed reports with regulators. In a response filed Wednesday with the Public Utilities Commission, PG&E acknowledged “various, and in some cases, extreme, shortcomings, including failure of the website, and coordination with state local and tribal governments” during the shut-off.

But it said it has since updated its website “to provide helpful and useful information to the public.”

Many of its customers disagreed, saying it was difficult to get to a map of outages and find specifics on when the electricity would go off or come back on.

“I woke up in the middle of the night and smelled smoke. I wanted to use my phone to find if fire was nearby, but the battery was out, and without electricity, I couldn’t charge it,” Judy Keene said Monday.

The Berkeley resident said her old-fashioned phone didn’t work either.

“I thought our landline would work,” Keene said. “That’s the reason we had a landline.”

Mark Quinlan, PG&E’s senior director of emergency preparedness and response, appeared stumped Tuesday night when asked how people should get information when the power is already out and many cellphone towers have stopped working.

“People could get the information from a website through family,” he suggested, “or they could just get it the old-fashioned way through calling on a landline.”

Fewer than half of U.S. households have a landline, according to data from the National Center for Health Statistics. More than 70% of young adults and renters have only a cellphone, the data says.

Local officials said information from PG&E has been slow and sometimes wrong or outdated, making it hard for them keep people informed.

“Every time PG&E gives us information, we’re really not certain whether it’s accurate or not, or if that’s what actually will happen,” said Carmel Angelo, Mendocino County administrator.

The entire county north of San Francisco lost power, and residents and officials were told it would come back after the first windstorm passed last week. PG&E said the second wind blast this week wouldn’t force blackouts in its most populous areas, but they did, she said.

In Marin County, north of San Francisco, PG&E responded to reports that it turned off power 15 hours earlier than it said it would Tuesday by blaming “operational constraints” because of fire and “a coordination error.”

Communication improved after the early October outage, but “there’s still much left to be desired,” said Laine Hendricks, a spokeswoman for Marin County, where residents have called wanting to know when their power would be back.

“Residents are like, ‘Why don’t you know?'” Hendricks said. “It’s a hard question to answer. Most of the time, local government should be able to answer those questions, but this is something that’s out of our hands. We’re just trying to remind them that we’re in the same boat.”

Power has come back to most of the county, she said, but thousands are still in the dark.

PG&E Corp. CEO Bill Johnson said the company will give a one-time credit to customers hit by the first blackout as a “recognition of things that we didn’t do well.”

In a statement, the company implied the problems were solely related to its website and call center communications. It has not said how much it will pay.

“I feel like when it eventually comes back on, people are going to be like, ‘What day is it? Where are we? What is that bright light coming from our ceiling?'” said Madeleine Kelley Stewart, chef and innkeeper at the Kelley & Young Wine Garden Inn, which is in an area of Sonoma County wine country that’s been in the dark since Saturday. “It’s going to be like a bunch of Neanderthals poking at fire.”

This story has been corrected to show the proper spelling of Laine Hendricks’ name.

—This coal baron pushed Trump to save U.S. miners. Now his company is going bankrupt—Norway is a green leader. It’s also drilling more oil wells than ever
—The World Bank and its peers get poor marks for funding renewable energy projects
—The Future 50 sustainability all stars
—How 3 PG&E execs decide when California businesses go dark to stop wildfires
Subscribe to The Loop, a weekly look at the revolutions in energy, tech, and sustainability.