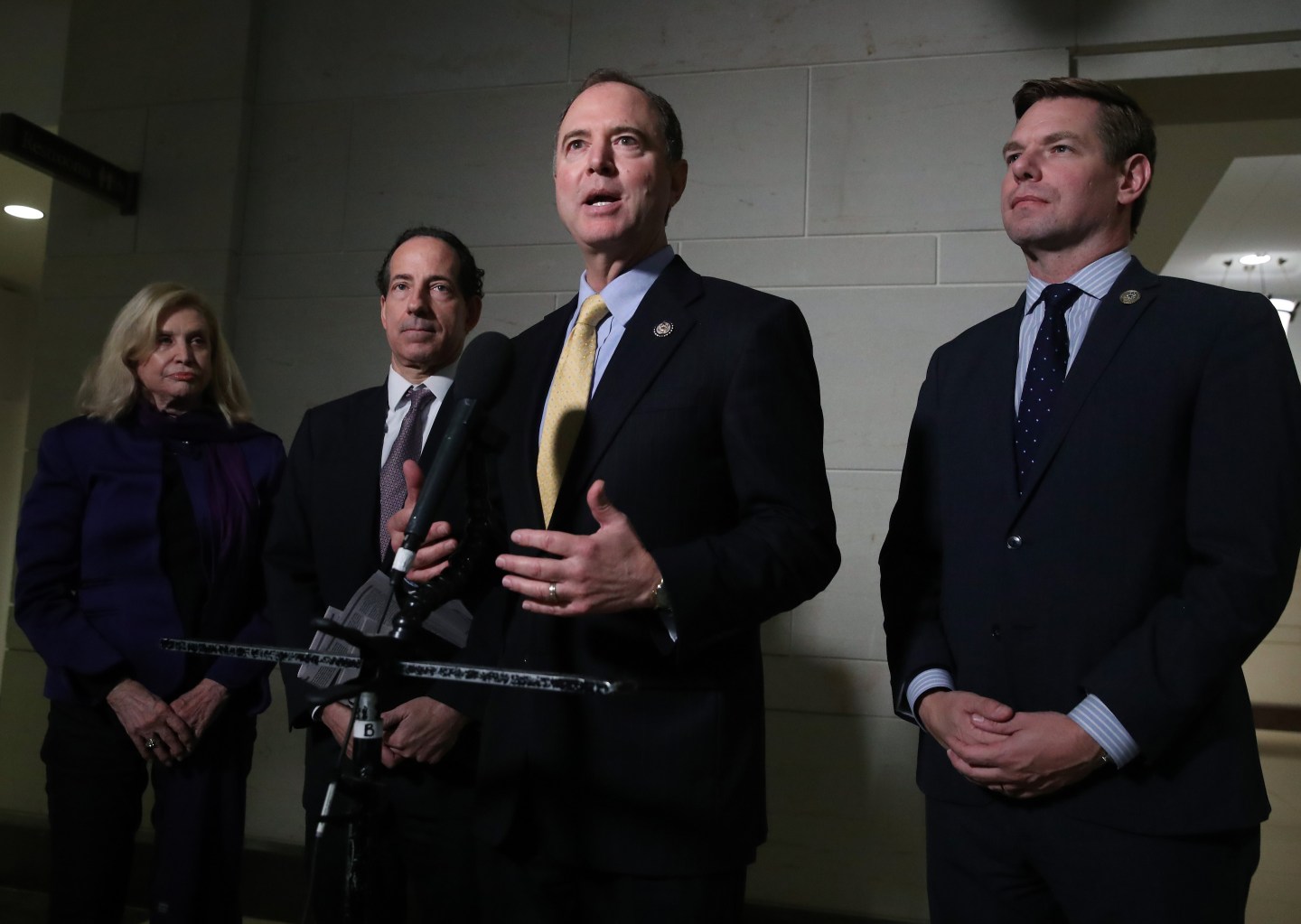 Charles Kupperman, who was a deputy to former national security adviser John Bolton, failed to show up for a scheduled closed-door deposition Monday after asking a federal court in Washington for guidance on whether he was legally required to do so.

House Intelligence Chairman Adam Schiff said Kupperman’s suit has “no basis in law” and speculated the White House didn’t want him to testify because his testimony could be incriminating. Democrats are investigating Trump’s overtures to the Ukrainian government to pursue politically motivated investigations as the administration was also withholding military aid to the country.

“If this witness had something to say that would be helpful to the White House they would’ve wanted him to come and testify,” Schiff told reporters Monday. “They plainly don’t.”

Kupperman was scheduled to testify as impeachment investigators are turning to the White House in their probe and issuing subpoenas, requiring their testimony. A series of State Department officials have testified this month about their concerns as Trump’s personal lawyer, Rudy Giuliani, took charge of Ukrainian policy and as Trump pushed out the U.S. ambassador there.

William Taylor , the current top diplomat in Ukraine, testified last week he was told the aid would be withheld until the country conducted investigations into Democrat Joe Biden and his family and into Ukraine’s involvement in the 2016 U.S. presidential election.

Democrats are now looking to hear from staff to the National Security Council, who they hope will have insight into White House discussions as the aid was withheld. Two current staffers, Alexander Vindman and Tim Morrison, are also scheduled to appear this week. It is unclear if they will appear.

Schiff said the three committees leading the inquiry will move on even if the witnesses don’t show up. Democrats have indicated that they are more likely to use that evidence to write an article of impeachment on obstruction of justice than they are to engage in court battles.

“We are not willing to allow the White House to engage us in a lengthy game of rope a dope in the courts, so we will move forward,” Schiff said afterward.

Seeking subpoena guidance from the court

In Kupperman’s lawsuit, he asked a judge to decide whether he should accede to House demands for his testimony or to assert “immunity from congressional process” as directed by Trump. He said he “cannot satisfy the competing demands of both the legislative and executive branches,” and without the court’s help, he said, he would have to make the decision himself—one that could “inflict grave constitutional injury” on either Congress or the presidency.

The court had yet to rule by Monday morning, and his lawyer said in a letter he was waiting for a judge to step in before committing to testify.

The three chairmen of the House committees overseeing the inquiry told Kupperman’s lawyers in a letter over the weekend the lawsuit was without merit and appeared to be coordinated with the White House. They called the suit “an obvious and desperate tactic by the President to delay and obstruct the lawful constitutional functions of Congress and conceal evidence about his conduct from the impeachment inquiry.”

In a letter Sunday obtained by The Associated Press, Kupperman’s attorney, Charles Cooper, wrote that it was not his client who was challenging Congress’ constitutional claims.

“It is President Trump, and every president before him for at least the last half century, who have asserted testimonial immunity to their closest confidential advisers,” Cooper wrote. “If your clients’ position on the merits of this issue is correct, it will prevail in court, and Dr. Kupperman, I assure you again, will comply with the court’s judgment.”

As House impeachment committees remain undeterred, so is the president, as he continues to test the limits of his administration’s constitutional powers.

The department also asked Chief U.S. District Judge Beryl Howell to put her own order on hold until a federal appeals court has an opportunity to weigh in.

Howell on Friday directed the Justice Department to produce by Oct. 30 grand jury testimony referenced in Mueller’s report. That information could be of value to House lawmakers conducting an impeachment inquiry of President Donald Trump. She also affirmed the legality of the impeachment inquiry, saying no formal resolution by the House was necessary.

In court filings Monday, the Justice Department argued that once the grand jury material is released to the House Judiciary Committee, there is no guarantee it will remain secret “and the confidentiality of the grand jury information will be lost for all time.”

The filings also said there is no reason for the department to produce by the end of this week grand jury information when the impeachment inquiry is scheduled to last into 2020. They also say the Mueller investigation is “secondary” in the impeachment probe to questions about Trump’s interactions with Ukraine, lessening the need for urgency.

“In order to reach the decision it did, the Court resolved difficult disputes between co-equal branches of government, including the question of what suffices to initiate the impeachment of a President,” Justice Department lawyers wrote. “The public interest lies in maintaining the status quo until an appellate court has had time to review and resolve these substantial legal question.”

—How 2020 battleground states can prevent voting machine hacking
—Why selling the Washington Trump Hotel could be strategic for the president
—5 lessons history has taught us about impeachment
—How whistleblowers have taken down titans of American business
Follow Fortune on Flipboard to stay up-to-date on the latest news and analysis.