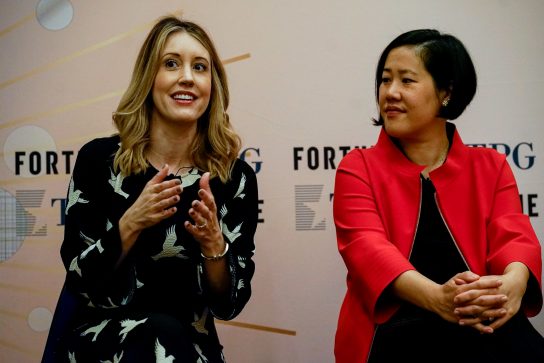 Female startup founders already struggle to raise venture capital. Now, founders say they may also be disproportionately tarnished by the recent failures of other startups.

After the collapse of Theranos, a blood testing startup that was charged with fraud for exaggerating its technological capabilities, Julia Cheek, founder and CEO of EverlyWell, an at-home health testing startup, was frequently compared to Theranos founder Elizabeth Holmes. Colleagues and advisors even suggested Cheek dye her blonde hair another color so she would less resemble Holmes, who is blonde, she said Tuesday at Fortune’s Most Powerful Women Summit in Washington, D.C.

Despite the fact that EverlyWell does not build its own testing devices, as Theranos purported to do, Cheek has had to repeatedly remind others of this in order to distinguish her company from the scandal. It hasn’t helped, Cheek added, that yet another female-led medical testing startup, uBiome, was recently raided by the FBI amid allegations of fraudulent insurance billing—even though EverlyWell does not deal with insurance at all. Given that there are far fewer women running companies than men, their failures are magnified, she said.

“There’s just a volume problem with female founders—so when you have one or two bad actors, and you’re in the same space, or you have any semblance of the same appearance, which is true for me,” said Cheek, “It is challenging from a lay person’s standpoint to be able to differentiate.”

Meanwhile, Amy Nelson, founder and CEO of The Riveter, a co-working startup, said her company had sometimes suffered by association to WeWork, the co-working company that pulled its IPO last month following controversy over the behavior and business practices of its CEO and his wife.

“I tend to think WeWork’s core business model is strong—though there are a lot of issues going on around it—but our model is different,” said Nelson during the same panel discussion at the conference.

“I think it is another undercurrent of sexism,” she said. “It’s challenging because you are compared to this very very small sample. There’s 20 other male founders who are also inventing new blood testing technology, and you don’t hear about them.”